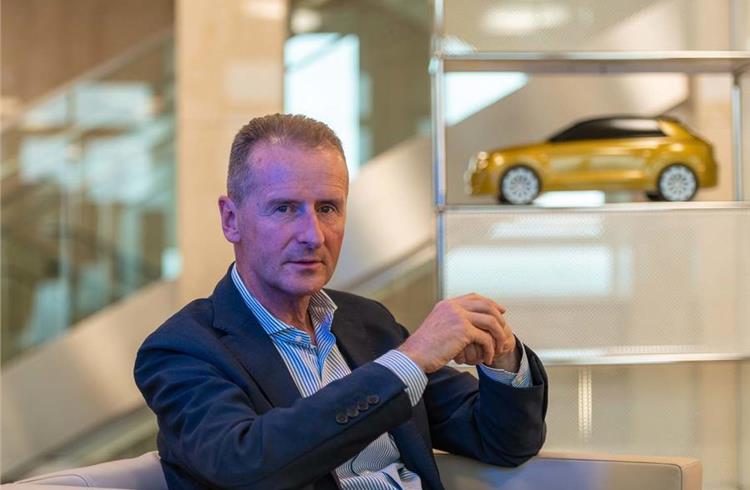 The Volkswagen Group has made the surprise announcement that its chairman Herbert Diess is resigning, to be replaced on 1 September by Porsche CEO Oliver Blume.

Diess is leaving "by mutual agreement", Volkswagen said in an official statement. No specific reason was given for his departure.

Hans Dieter Potsch, Chairman of the Supervisory Board praised Diess for his role in “advancing the transformation of the company”. The outgoing chairman “not only steered the company through extremely turbulent waters, but he also implemented a fundamentally new strategy.” Potsch said in a statement.

Blume will continue as Porsche CEO after assuming Diess's responsibilities, with VW Group chief financial officer Arno Arlitz moving into the role of chief operating officer to support him with "day-to-day operations".

Diess took over as chairman of the VW Group in 2018 from Matthias Mueller with the brief to transform the company after the lows of the 2015 dieselgate scandal.

His early pivot to EV with the development of the MEB electric platform proved far-sighted as Tesla sales expanded fast and tough CO2 legislation in both Europe and China shortened the remaining runway for combustion engine vehicles.

However, Diess has clashed with powerful German unions as questions about how the company would replace jobs in the electric era created unease in the workforce. In November the VW works council reportedly issued a vote in no confidence in Diess as anger over the direction of the company mounted. He narrowly survived in his role.

Some commentators wondered if Diess might have taken the fall for the company’s missteps in the software rollout for both the MEB models and new combustion engine cars. The Volkswagen ID 3 electric car was launched without some software features, although VW earlier this year issued a big update to the MEB-based range’s infotainment system.

What strategic changes Porsche’s Blume will make is unclear at this stage. Blume backed electric in the brand’s recent capital markets day presentation, in which he discussed upcoming electric versions of the Porsche Macan, Porsche Cayenne and Porsche Boxster. He also announced a new SUV based on the forthcoming Scalable Systems Platform (SSP) electric platform. Porsche also backing e-fuels to power future versions of its 911 flagship car.

Blume joined the Volkswagen Group in 1994 and has since held management positions at Audi, Seat, Volkswagen and Porsche. He has been Porsche chairman since 2015 and a member of the Group Board of Management since 2018.