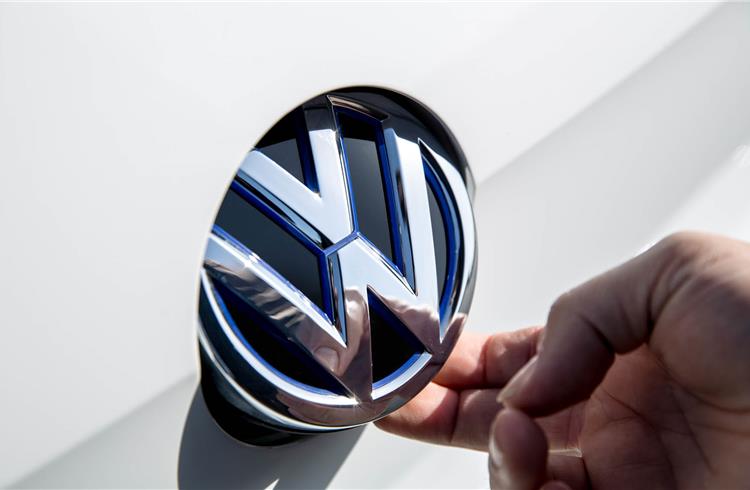 Volkswagen has said that as many as 11 million vehicles worldwide may be affected in the emissions test cheating scandal.

In a new statement issued this morning, the German manufacturer explained that the engine at the centre of the controversy is the Type EA 189, and VW has said that the notable deviation between emissions results in testing and on-road driving were only for cars fitted with this engine.

But company also admitted that the engine management software at the centre of the scandal is also installed in other Volkswagen Group diesel engines. However, VW believed it doesn’t have an effect in the majority of cars in which it features.

The company moved to reassure consumers in Europe and said: “New vehicles from the Volkswagen Group with EU 6 diesel engines currently available in the European Union comply with legal requirements and environmental standards.”

VW has put aside a fund of 6.5 billion euros (Rs 49,686 crore) to cover the costs of dealing with the issue, and says it will adjust its financial targets for 2015 as a result.

The statement continued: “In addition to this, Volkswagen does not tolerate any kind of violation of laws whatsoever. It is the top priority of the board of management to win back lost trust and to avert damage to our customers.”

Volkswagen Group boss Martin Winterkorn has apologised for “breaking the trust of our customers and the public” following reports that the company manipulated emissions testing regulations in the USA.

Meanwhile, Michael Horn, CEO and president of the Volkswagen Group of America, has admitted: "Our company was dishonest. We have totally screwed up. We must fix the cars to prevent this from ever happening again and we have to make this right. This kind of behaviour is totally inconsistent with our qualities."

The matter came to light when the US Environmental Protection Agency (EPA) and the California Air Resources Board (CARB) revealed that while testing 2.0-litre, four-cylinder diesel cars of the Volkswagen Group they detected electronic manipulations that violate American environmental standards.

Volkswagen Group share price hit by the scandal
The price of shares in the Volkswagen Group on the Frankfurt stock exchange fell sharply on Monday following the EPA's announcement of its findings, and about 15 billion euros was wiped off the value of the company. The share price continued to drop on Tuesday morning as it emerged that other countries and regions are likely to check whether Volkswagen models conform to their own tests.

Volkswagen and Audi cars in the USA are fitted with a ‘defeat device’ that allows the vehicle to perform more efficiently in the official emissions test than in real-world driving conditions. The device is embedded in the software code that runs the ECU. It detects when the car is being tested and turns on full emissions controls, but the effectiveness of the device is reduced in normal conditions.

According to the EPA, this means that the cars under investigation could be emitting up to 40 times the national standard for nitrogen oxide (NOx), which is linked to asthma and lung illnesses. The cars affected are 2009-2014 Jettas, Beetles, Golfs, Audi A3s, and VW Passats built from 2014-15.

Volkswagen is pausing sales of some Volkswagen and Audi models equipped with the diesel engine that is at the heart of the controversy. It is also likely to implement a recall of more than 482,000 cars already in customers' hands because the EPA and CARB has ordered the car company to remedy the excessive emissions of the affected vehicles.

An EPA statement said: “EPA expects to compel VW to issue a recall in the future to reduce the emissions impacts of these vehicles. Owners will be notified of that recall once Volkswagen and Audi have developed a remedial plan and EPA has approved the plan. Manufacturers are given a reasonable amount of time to develop a plan to complete the repairs, including both the repair procedure and manufacture of any needed parts.”

Volkswagen faces financial penalties and possible legal action
It has been suggested that the recall could cost the manufacturer up to £11.5 billion (Rs 113,194 crore), with the EPA saying: “VW may be liable for civil penalties and injunctive relief for the violations alleged.”

In addition to this, Volkswagen is already the subject of a lawsuit in the USA, filed by Keller Rohrback: “on behalf of consumers nationwide who purchased or leased Volkswagens with unlawful defeat devices.”

Lynn Lincoln Sarko of Keller Rohrback added: “Volkswagen’s decision to prey on environmentally conscious consumers who paid a premium of thousands of dollars for a supposedly cleaner-running car, and who received a polluting vehicle instead, is despicable. Consumers nationwide are justifiably outraged, and Volkswagen will have to answer to them.”

The EPA says that the cars in question do not prove a safety hazard and are still legally okay to drive and sell on.

Winterkorn has ordered an external investigation into the matter.

“The board of management at Volkswagen AG takes these findings very seriously,” he said.

“I personally am deeply sorry that we have broken the trust of our customers and the public. We will cooperate fully with the responsible agencies, with transparency and urgency, to clearly, openly, and completely establish all of the facts of this case.  Volkswagen has ordered an external investigation of this matter.

“We do not and will not tolerate violations of any kind of our internal rules or of the law.   The trust of our customers and the public is and continues to be our most important asset.

Sales of many diesel Volkswagens have been suspended in Canada, which shares similar emissions testing procedures as its neighbouring nation.

In the UK, a spokesman for the Volkswagen Group said that he is “not aware of any recalls in Europe or the UK,” and pointed out that the emissions testing procedure is different in Europe to North America. The spokesman added that the ‘defeat device’ was not something that the UK arm of VW was aware of.

US government sets up hearing into emissions scandal
The issue will be investigated by the US Congress’s Oversight and Investigations Subcommittee.

“Strong emissions standards are in place for the benefit of public health,” said House Energy and Commerce Committee Chairman Fred Upton and Oversight and Investigations Subcommittee Chairman Tim Murphy in a joint statement.

“Manufacturers throughout the United States, and across the world, have developed leading technologies to reduce airborne emissions within the limits set by EPA and state environmental agencies. However, reported EPA allegations that certain Volkswagen models contained software to defeat auto emissions tests raise serious questions,” they said.

“We will follow the facts. We are also concerned that auto consumers may have been deceived – that what they were purchasing did not come as advertised. The American people deserve answers and assurances that this will not happen again. We intend to get those answers.”

A date for the US Congress hearing has yet to be set.

How the 'defeat device' works and why it broke the rules
The EPA’s official notification issued to Volkswagen on 18 September sheds light on how Volkswagen managed to influence the emissions tests with some clever software.

“VW manufactured and installed software in the electronic control module (ECM) of these vehicles that sensed when the vehicle was being tested for compliance with EPA emission standards," the agency explained.

The EPA refers to what it calls a ‘switch’ that enabled the car’s ECM to know when it is being tested on a rolling road: “The ‘switch’ senses whether the vehicle is being tested or not based on various inputs including the position of the steering wheel, vehicle speed, the duration of the engine’s operation and barometric pressure. These inputs precisely track the parameters of the federal test procedure used for emission testing for EPA certification purposes.

“During emission testing, the vehicles’ ECM ran software which produced compliant emission results under an ECM calibration that VW referred to as the ‘dyno calibration’.

“At all other times during normal vehicle operation, the ‘switch’ was activated and the vehicle ECM software ran a separate ‘road calibration’ which reduced the effectiveness of the emission control system. As a result, emissions of NOx increased by a factor of 10 to 40 times above the EPA compliant levels, depending on the type of drive cycle (e.g. city, highway).”

All US vehicles must be issued with a certificate of conformity that proves they adhere to environmental standards.

To obtain a certificate of conformity, a manufacturer must submit a list of all auxiliary emission control devices (AECDs) present on the vehicle. The EPA’s definition of an AECD is “any element of design which senses temperature, vehicle speed, engine RPM, transmission gear, manifold vacuum or any other parameter for the purpose of activating, modulating, delaying or deactivating the operation of any part of the emission control system.”

The issue facing Volkswagen is the switchable system in the ECM was not declared.

“Due to the existence of the defeat devices in these vehicles, the affected Volkswagen vehicles do not conform in all material respects to the vehicle specifications described in the applications for the certificates of conformity that purportedly cover them,” said the EPA.

A defeat device is an AECD “that reduces the effectiveness of the emission control system under conditions which may reasonably be expected to be encountered in normal vehicle operation and use. Motor vehicles equipped with defeat devices cannot be certified.”

May 2014 The West Virginia University’s (WVU) Centre for Alternative Fuels, Engines and Emissions publishes results of a study commissioned by the International Council on Clean Transportation that found significantly higher-than-claimed in-use emissions from two diesel cars, a 2012 Jetta and a 2013 Passat. A BMW X5 also tested passed the tests. WVU alerts California Air Resources Board (CARB) and the Environmental Protection Agency (EPA) to the issue.

Summer 2014 Over the course of the year following the publication of the WVU study, VW continues to assert to CARB and the EPA that the increased emissions from these vehicles could be attributed to various technical issues and unexpected in-use conditions.

6 May 2015 CARB, in coordination with the EPA, conducts follow-up testing of these vehicles both in the laboratory and during normal road operation to confirm the efficacy of VW’s recall. Testing shows the recall has had only a limited benefit. None of the potential technical issues suggested by VW can explain the higher test results consistently confirmed during further testing by CARB.

Summer 2015 CARB and the EPA make it clear that they will not approve certificates of conformity - necessary for vehicles to be sold in the USA – for VW’s 2016 model year diesel vehicles until the manufacturer car adequately explain the anomalous emissions and ensure the agencies that the 2016 model year vehicles would not have similar issues.

3 September 2015 During a meeting VW admits it has designed and installed a defeat device in these vehicles in the form of a sophisticated software algorithm that detects when a vehicle is undergoing emissions testing.

18 September 2015 CARB and the EPA make their findings public, stating that Volkswagen has violated two sections of the Clean Air Act, firstly by selling or offering for sale vehicles that did not comply with their certificates of conformity, and second by manufacturing and installing into these vehicles an electronic control module capable of switching its calibration to beat the emissions tests.

- How a university lab helped unearth the VW emissions scandal

- Winterkorn steps down as Volkswagen boss