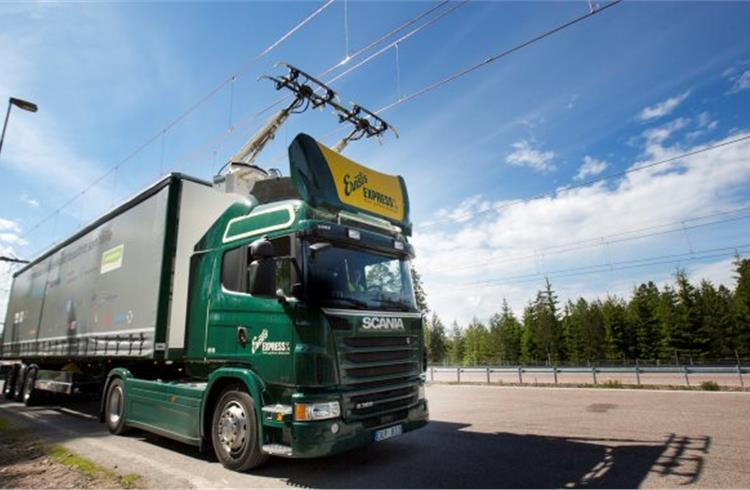 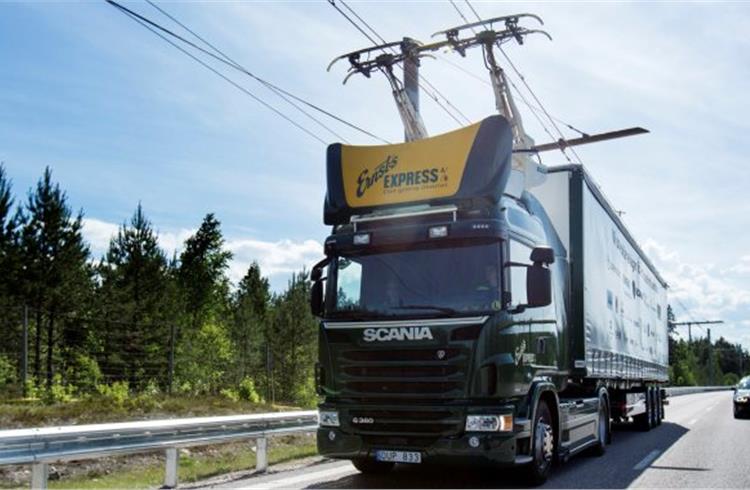 The world´s first electric road was inaugurated near the city of Gävle in central Sweden, the result of a unique partnership demonstrating the path towards fossil-free transportation. Scania will supply the electrically-powered trucks, which will operate under real traffic conditions.

The new technology is the result of the cooperation between the Swedish Government and the private sector, permitting the trucks to operate as electric vehicles when on the electrified road and as regular hybrid vehicles at other times. All the Scania trucks on the road are hybrid and Euro 6-certified, running on bio-fuel.

Scania’s head of Research and Development Claes Erixon, said, “The electric road is one important milestone on the journey towards fossil-free transport. Scania is committed to the success of this project and is committed to sustainable transport solutions.”

The trucks receive electrical power from a pantograph power collector that is mounted on the frame behind its cab. Pantograph is a jointed framework conveying a current to the electric vehicle from overhead wires. The trucks can freely connect to and disconnect from the overhead wires while in motion.

When the trucks go outside the electrically-powered lane, the pantograph is disconnected and the trucks are then powered by the combustion engine or the battery-operated electric motor. The same principle applies when the driver wants to overtake another vehicle while on the electrified strip of the road.

Scania sees the electric road as being a key component in achieving Sweden’s ambition of an energy-efficient and fossil-free vehicle fleet by 2030. It can also help to strengthen Sweden’s competitiveness in the rapidly-developing area of sustainable transport.

Nils-Gunnar Vågstedt, responsible for Scania’s research into electrification, said, “The potential fuel savings through electrification are considerable; the technology can become a cornerstone for fossil-free road transport services.”

The investment in the Electric Road E16 programme in Gävle is a result of a programme for the public procurement of innovative solutions that was launched by Swedish authorities. The programme consists of about SEK 77 million (Rs 60 crore) in public money, with about SEK 48 million (Rs 40 crore) in co-financing from the business community and the Gävleborg regional authority, which administers the area of Sweden where the electric road is situated.

The Swedish transport authority Trafikverket, the Swedish Energy Agency Energimyndigheten, innovation agency Vinnova, Scania and Siemens are the main funders of the technology, while Region Gävleborg is the project coordinator.

The electric road is only one of several pioneering technologies that Scania is working on to help the spread of sustainable solutions within both urban and long-haul transport. The company is also developing technologies for alternative fuels, hybridised and fully-electric vehicles, and autonomously and wirelessly-connected transport in parallel with its work to further enhance and refine the products of the future.

In February 2016, Union Minister of road transport, highways and shipping, Nitin Gadkari had announced that India and Sweden will set up a joint working group to take on the challenges related to India’s transportation sector. He also met Oscar Stenstrom, State secretary for enterprise and innovation from Sweden, during the Make-in-India Week in Mumbai. It is known that a team of political and industry delegates from Sweden including the Swedish prime minister Stefan Lofven visited India for the conference on Indian government’s flagship initiative.

Several Swedish companies in the automotive business are known to have invested in India with SKF (leading supplier of bearings and related products), Scania and Volvo being the leading names. Both the commercial vehicle manufacturers have been pushing for environment- friendly technologies such as biofuel-run buses. Scania, for instance, is known for holding several discussions and meetings across the concerned automotive and state bodies for deployment of its biofuel buses.

Further, Scania is known to have conducted trial runs of its biofuel-run buses through 2014, and found support in Nagpur Municipal Corporation (NMC) for successfully launching its pilot project in the city in August 2015. Nagpur, also a constituency of Gadkari, via NMC and along with Scania India, had commissioned a pilot biogas plant and a pilot facility for at least 100 bio-fuel (bioethanol and biogas) buses that year.

You may like: Norway could be looking at an all-electric motoring future by 2025