Solaris, one of the leaders in electromobility in Europe has reported its highest sales volume and is predicting an even bigger growth with over 500 commissioned electric buses for 2020. 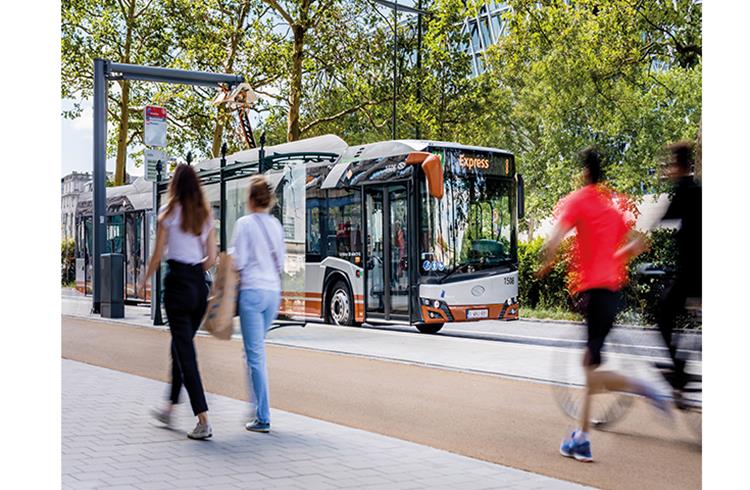 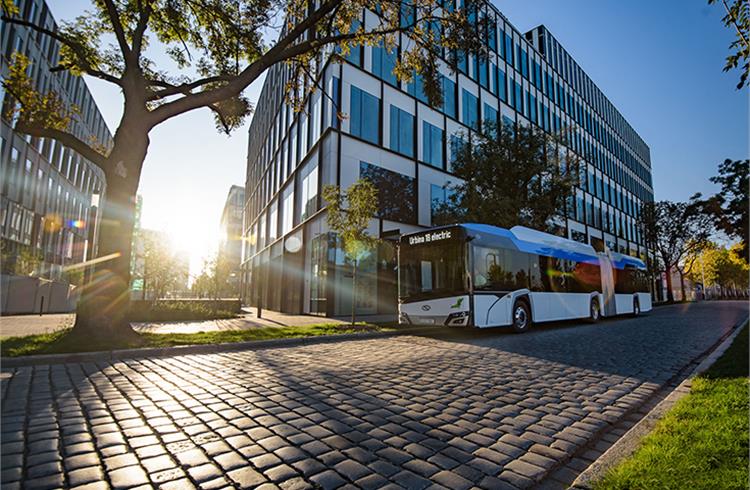 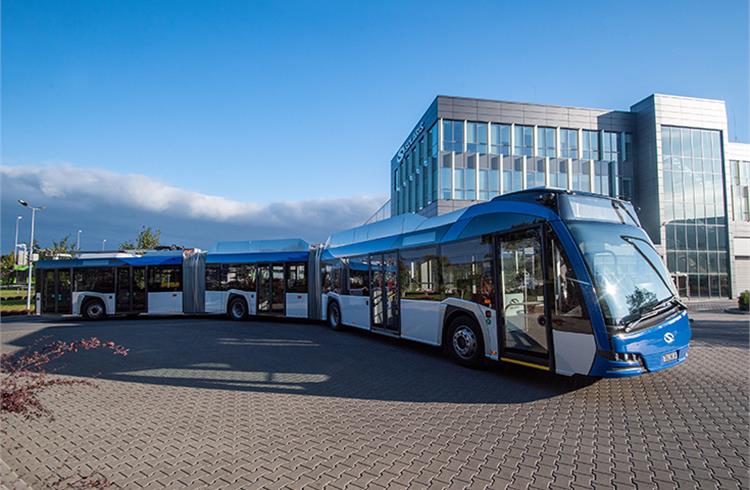 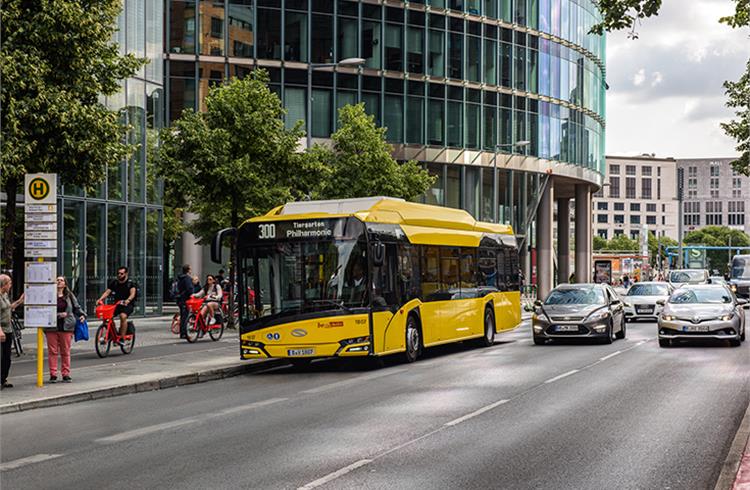 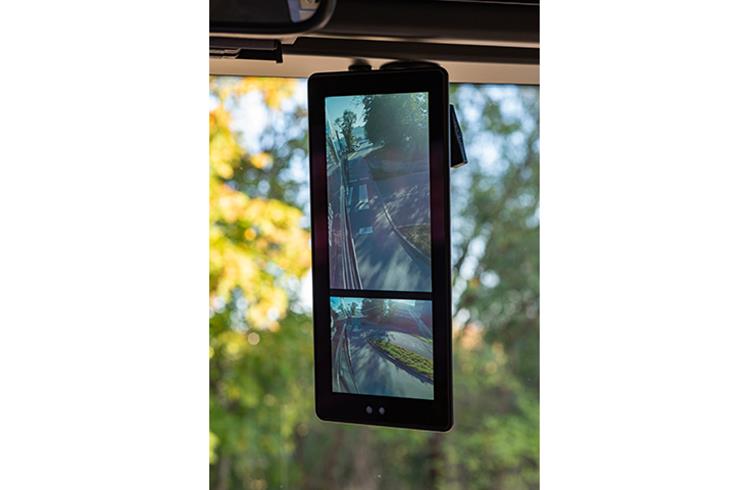 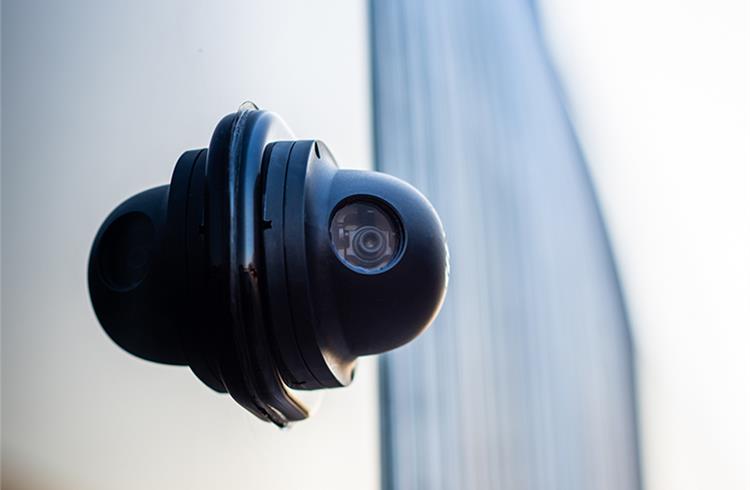 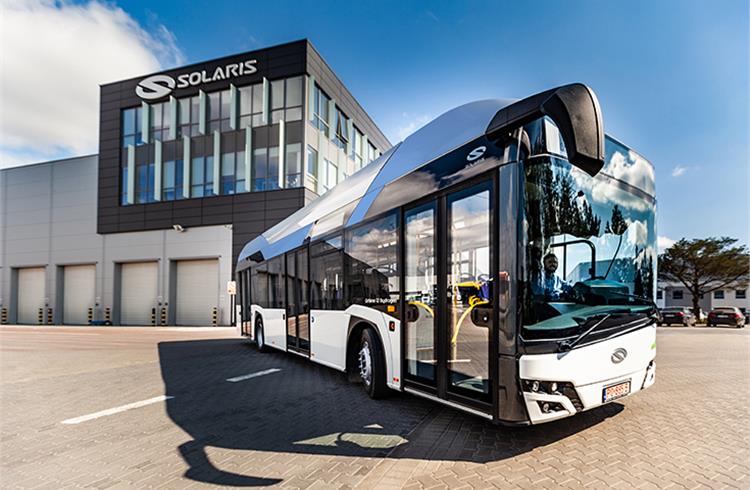 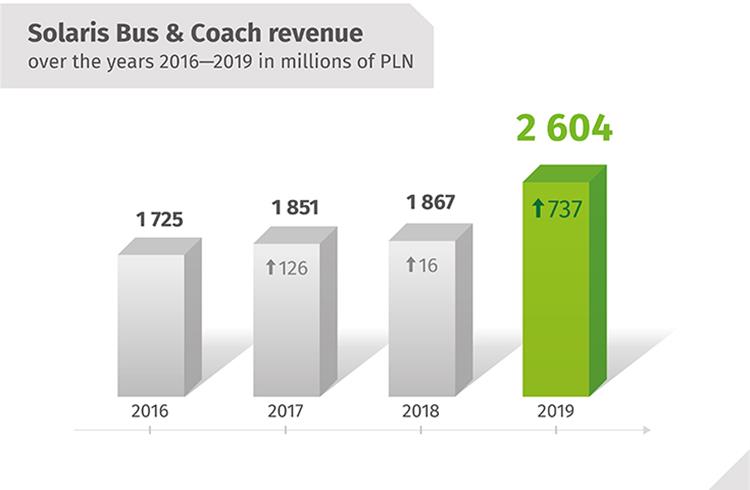 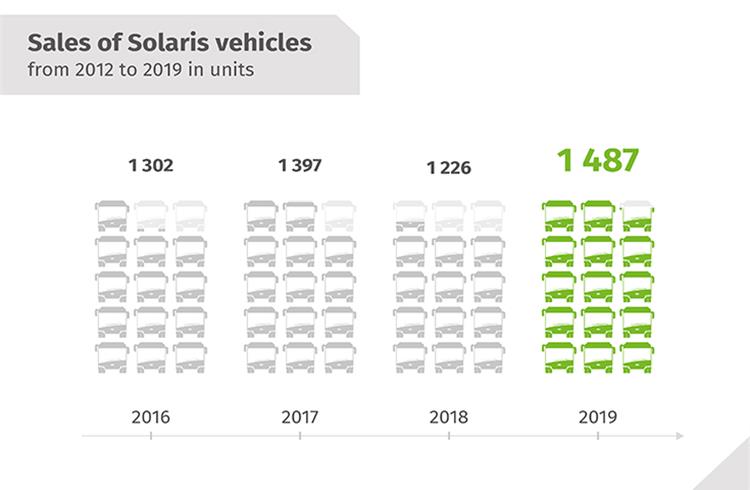 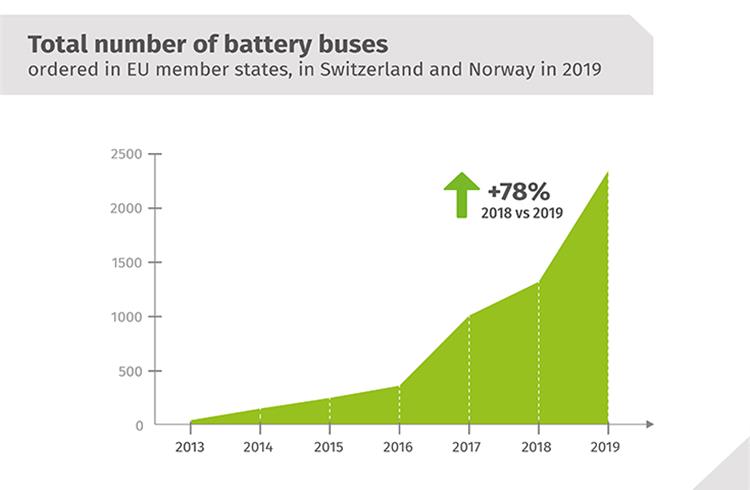 Solaris Bus & Coach is one of the leading European bus and trolleybus manufacturers. According to the sales report for 2019, Solaris has supplied 1,487 vehicles with record sales revenues of PLN 2.6 billion (Rs 4,967 crore), a YoY rise of 40 percent. Its previous record was in 2017 when it sold 1,397 vehicles. 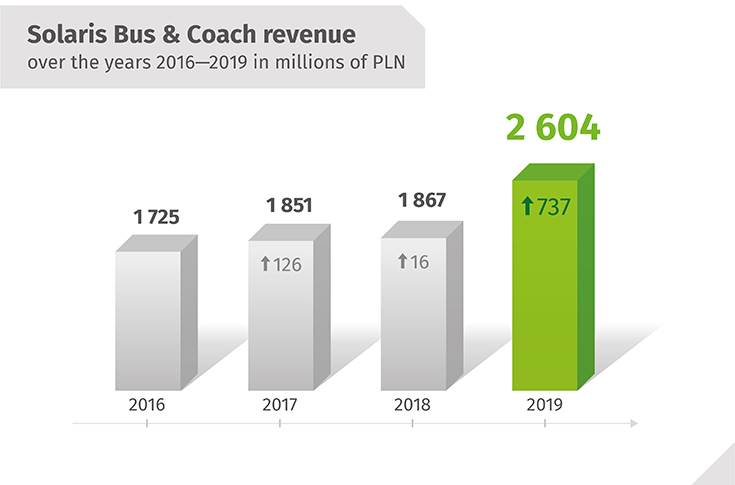 Solaris is present in 32 countries, in over 750 cities. In total, the manufacturer has supplied nearly 19,000 vehicles to its customer so far. In 2019, the biggest sales markets of Solaris were Poland, Germany, Belgium, Lithuania and Italy. It is currently looking into the production and after-sales servicing towards with vehicles with alternative, low or zero-emission propulsions. According to Solaris, In 2018, hybrid and electric buses, as well as trolleybuses, constituted in total 29 percent of all vehicles sold. Meanwhile, in 2019, their share in sales increased by 11 percentage points to 40 percent. 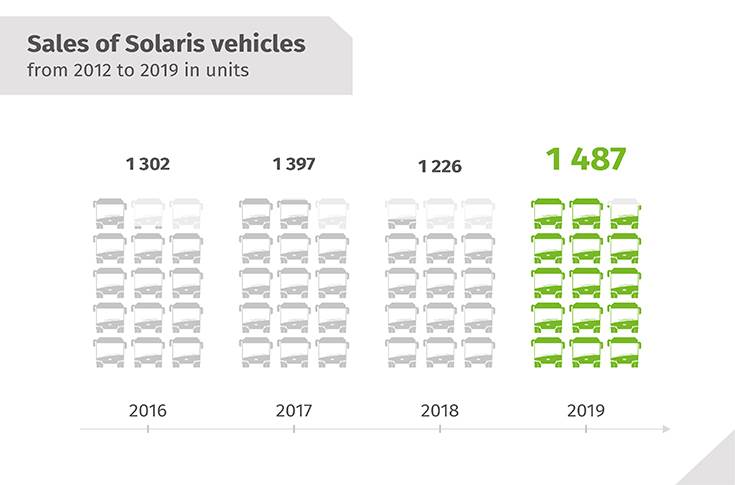 In 2019, the manufacturer has supplied in total 162 battery buses, which marks a rise by 51% versus 2018. Based on the orders already secured, it is possible to assume sales of battery buses of Solaris at a level of at least 500 units in 2020. The contracts due to be performed this year include among others the mega order for 130 articulated Solaris Urbino 18 for operator MZA in Warsaw, or the framework agreement for the supply of 250 Solaris Urbino 12 electric buses for Milanese operator ATM. Compared to 2017, this represents an over eightfold increase of orders secured for electric buses.

The trend of a growing share of low or zero-emission drive vehicles in the company’s sales and production structure will certainly continue in 2020. It is also consistent with the trends of the whole EU and EFTA market which is the chief area of commercial activity for Solaris. For a few years now, these states have seen an unusually dynamic climb of demand for low and zero-emission vehicles in public transport. When comparing the number of battery buses commissioned year-on-year (2018 – 1313 units / 2019 – 2341 units) Solaris is of the opinion that this segment has recorded a 78 percent surge. Solaris is one of the leaders of this transition of the market towards e-mobility. Solaris was of the first movers and promotors of e-bus technology and continues its leading role for many years now.

In 2019, at the Global Public Transport Summit in Stockholm, the Polish company presented the new generation of its hydrogen bus Solaris Urbino 12 hydrogen. The main source of energy for the vehicle is hydrogen which is transformed into electricity which, in turn, feeds the propulsion system. 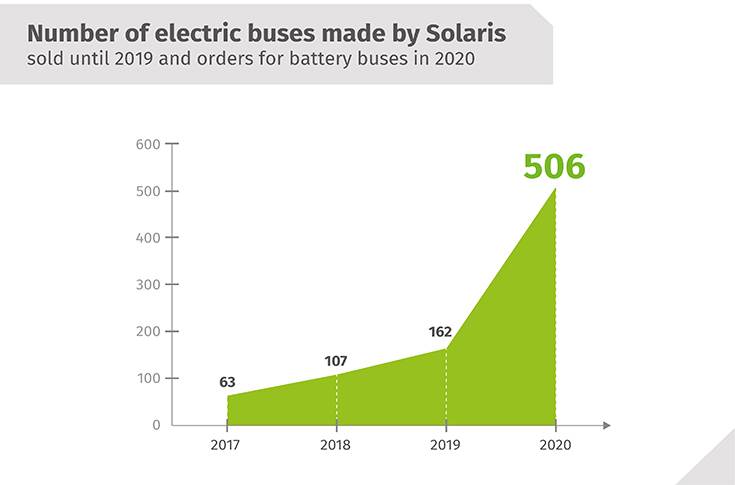 According to Solaris, hydrogen technology used for power generation will enable buses to traverse even longer distances completely emission-free. Hydrogen-fuelled buses will allow to create a complementary emission-free bus portfolio thanks to which Solaris will be braced for contemporary challenges and the diverse needs of customers with regard to range, flexibility and operability of vehicles. The manufacturer believes that the development of all electromobility branches, be that battery buses, trolleybuses or hydrogen-fuelled vehicles, should proceed in synergy, and that this process is indispensable to ensure sustainable transport of the future. Therefore, hydrogen-powered buses of Solaris will not constitute competition for battery buses or models of the Trollino series. Quite the opposite: these technologies will complement each other perfectly and they will all benefit from the technological progress of electric drivelines and their components. It is worth noting that in 2019, Solaris secured its first orders for hydrogen vehicles. Transport firm SASA Bolzano has ordered 12 units of the Urbino 12 hydrogen model, to be delivered in 2021. Thus, Solaris is proving that since 2014 it is a reliable partner in hydrogen technology, having its hydrogen vehicles already delivered to Hamburg and Riga. 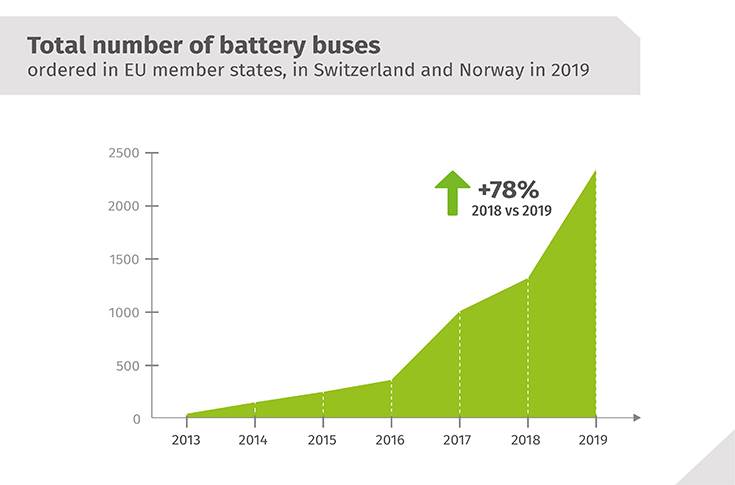 Another product novelty presented by Solaris in 2019 was the bi-articulated Trollino 24, which is the longest vehicle assembled by manufacturer so far. The idea behind the Trollino was to create a platform for the future serial production of 24-metre vehicles with an electric or hybrid driveline and of trolleybuses.

Back in 2011, when Solaris unveiled its first electric bus, its offer included only one battery option. Over 25 million kilometres covered by the Urbino electric buses and experience gathered from the operation of vehicles in dozens of cities in various climates make it possible for Solaris today to offer the optimal battery solutions to its customers. The firm’s latest development is the Solaris High Energy+ batteries. These were designed by the Solaris Research and Development Department, bearing in mind the needs of carriers who want to cover at least 200 km on a single charge, regardless of the weather conditions, and thus regardless of air-conditioning or heating working. The Solaris High Energy+ batteries are characterised by an extremely high energy density. Thanks to this feature, battery offers 79 kWh into one pack. This means that in the case of 7 packs – that is how many can be installed in an articulated bus at the most – it can be reached a nominal energy rate of 553 kWh. It may be worth underscoring that the solution is the result of cooperation between the Solaris and BZM Poland Research and Development Departments. Batteries of this type can be used only in Solaris vehicles and as of today, no other producer in the electric bus market is offering them. 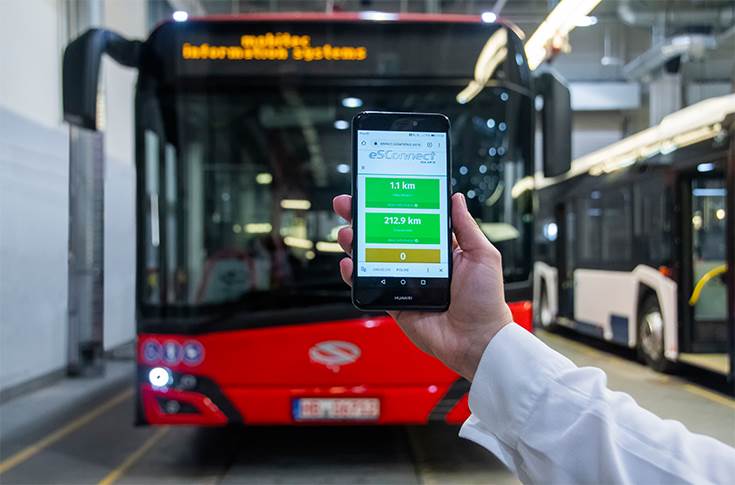 Solaris’s eSConnect is a modern system of monitoring and fleet management dedicated to those Solaris clients who have decided to purchase emission-free vehicles. eSConnect software represents a multifaceted tool that enables the efficient management of a fleet of electric buses and the optimal use thereof. The eSConnect is an accurate diagnostics instrument, facilitating and supporting maintenance capacities.

Another R&D projects developed by Solaris in 2019 are the new ADAS Solutions (Advanced Driver Assistance Systems) available in Solaris vehicles. Active driver assistance systems help drivers by performing certain actions before them or in their stead, and thus provide them with invaluable seconds for a proper response. One of systems is Collision Mitigation System (CMS) which initiates automatic braking. When a radar installed on top of the bus detects the risk of a potential head-on collision, the system goes into braking mode, reducing velocity and thus alleviating the consequences of a potential collision. Moreover, Solaris has presented new solution reducing “blind spot” effect for drivers. Cameras placed outside the vehicle detect pedestrians and cyclists who are not reflected in mirrors, especially during turns, even if it may seem to them that they must be visible to the driver. In order to solve this challenge, Solaris has availed itself of the Mobileye Shield+, a system warning the driver – with acoustic signals and visual alerts on the display – also in cases when changing lanes without adequate signalling beforehand or when no appropriate distance to the vehicle in front is maintained. The system also alerts the driver to collision risks. The device detects every pedestrian and cyclist within 80 cm from the bus, alerting the driver to their presence – again, acoustically and visually on a display. What the driver does not see in the mirror is pointed out to them by the camera steering device. The ingenious design of the MirrorEye installed in lieu of regular rear-view mirrors corresponds to class 2 and 4 visibility (optionally class 5 in the right “mirror”) and this yields a whole range of advantages. In 2020, Solaris is going to introduce low-entry Solaris Urbino 15 LE electric. The tri-axle bus is built mainly with customers of the Scandinavian market in mind. The vehicle will be available both as a typical city bus (class I) and also as an intercity bus (class II). The Solaris Urbino 15 LE will be offered either with two or with three doors (2-2-0 or 2-2-1 layout), and it will be able to carry up to seated 55 passengers. Energy will be stored in Solaris High Energy+ batteries of the latest generation, boasting extremely high energy density and a capacity that will ensure an adequate travel distance both on city and on intercity routes. Two battery charging modes will be possible, depending on the users’ preferences, involving either a plug-in charger or a bus roof-mounted pantograph. 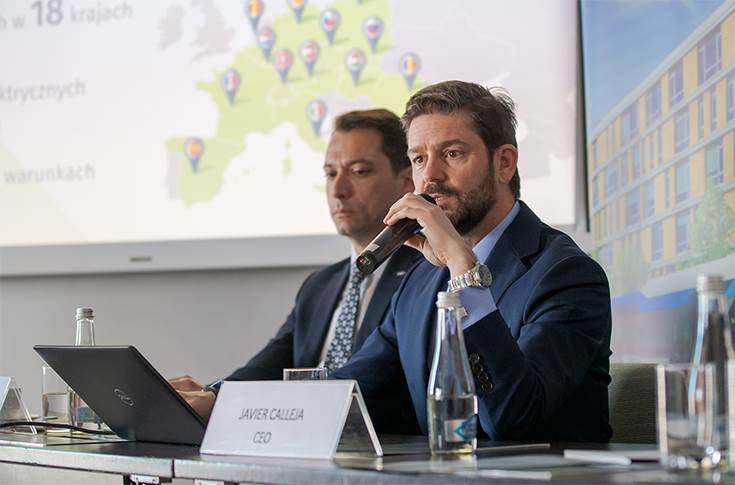 Javier Calleja, CEO of Solaris Bus & Coach said, “2019 was a record year for Solaris in many respects.  What we have achieved thanks to our employees and thanks to the trust our customers put in us is fantastic. This year, we will face new challenges, related above all to the continuous dynamic development of electromobility. We plan further increases of sales and output. In 2020, we assume the supply of over 500 electric buses. Of course, this entails further investments and the optimisation of servicing processes and structures, in order to ensure the highest possible service quality for all our clients from the moment of vehicle delivery, throughout the whole service live of the vehicle.”