No sidewalk or hallway is safe from mishap in these days of smartphone entranced, text-happy pedestrians. More worrying, though, is that many people continue to use their phones and mobile devices even while crossing busy roads. 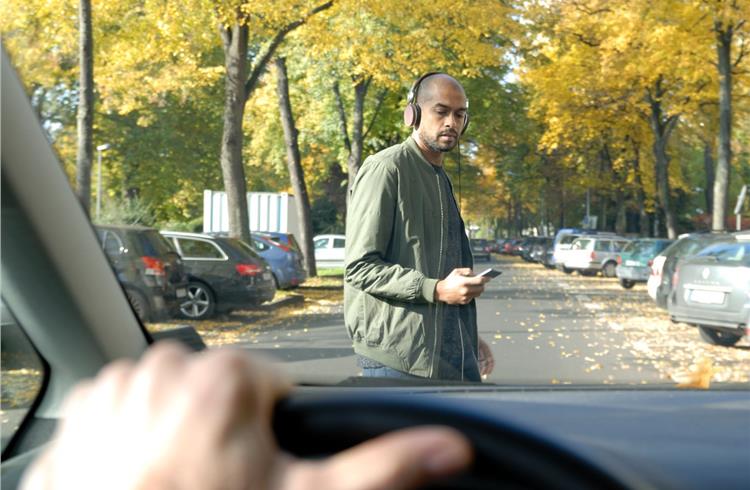 No sidewalk or hallway is safe from mishap in these days of smartphone entranced, text-happy pedestrians. More worrying, though, is that many people continue to use their phones and mobile devices even while crossing busy roads.

Ford commissioned a survey of 10,000 people across Europe to dimension the issue of distracted pedestrians crossing roads – including situations when there is no official crossing. According to official data, more than 85,000 pedestrians lost their lives on European roads between 2003 and 2013, and car crashes are the leading cause of death in 18 to 24-year-olds.

Most smartphone users surveyed (57 percent) admitted using their devices when crossing the road, even when there is no formal crossing, and nearly half (47 percent) talk on the phone. Those aged 18-24 years old were most likely to have used mobile devices or phones (86 percent), talked on the phone (68 percent), listened to music (62 percent), texted (34 percent), and had an accident or near miss (22 percent), while crossing the street.

The carmaker is highlighting the risks posed by pedestrians who are distracted as part of Ford Driving Skills for Life (DSFL) the award-winning novice driver programme that has provided training to more than half a million people globally through hands‑on and online education since its launch in the U.S. 11 years ago. Brought to Europe in 2013, Ford has now introduced DSFL training in Belgium, Denmark, France, Germany, Italy, the Netherlands, Romania, Russia, Spain, Turkey, and the U.K., working together with leading safety organisations. Training also highlights the risks of drink-driving and using social media while driving.

“It’s one thing to walk along the pavement with headphones on listening to music, but stepping into a road while texting, playing a game or browsing online is extremely dangerous,” said Jim Graham, manager, Ford DSFL. “Our training makes students more aware of their surroundings both as a driver and a passenger, so hazards can be anticipated earlier.”

Overall, 32 percent of pedestrians admitted listening to music, 14 percent text, 9 percent browse the internet, 7 percent use social media, and 3 percent play games or watch TV/videos while crossing roads. Most admitted the behaviour was dangerous, and 60 percent said they felt safer knowing that autonomous vehicles, or vehicles equipped with semi-autonomous technologies, could intervene to prevent or mitigate an accident if the driver did not respond to warnings.

Ford recently has introduced a new pedestrian detection technology that could assist the driver in reducing the severity of accidents or help drivers avoid them altogether. Pre-Collision Assist with Pedestrian Detection, now available for Galaxy, Mondeo, and S-MAX, can under certain conditions detect people in the road ahead, or who could cross the vehicle’s path, and can automatically apply the brakes if the driver does not respond to warnings.

The system processes information collected from a windshield-mounted camera, and radar located in the bumper, and checks it against a database of “pedestrian shapes” to distinguish people from typical roadside scenery and objects. While the new system may be especially helpful in unexpected situations, it does not replace the driver and has limitations including night-time, low and harsh lighting conditions, certain weather conditions, and vehicles moving in a different direction.

Official data obtained by the Institute of Advanced Motorists (IAM), Britain’s biggest independent road safety charity, reveals that 23 per cent of vehicle accidents involving a pedestrian injury in the U.K. in 2013 occurred in circumstances where the pedestrian failed to look properly, was careless or reckless, or in a hurry.

“Pedestrian fatalities are rising faster than any other group right now so it is vital that drivers are more sympathetic and aware of pedestrians when they make their journeys,” said Sarah Sillars, chief executive officer, IAM. “There is no need to blame any party when it comes to how to reduce the numbers of people killed and injured on our roads – all road users need to look out for each other and ensure we minimise the impact of our own and others’ unpredictable behaviour.”