Nissan to oust boss Carlos Ghosn due to 'serious misconduct' 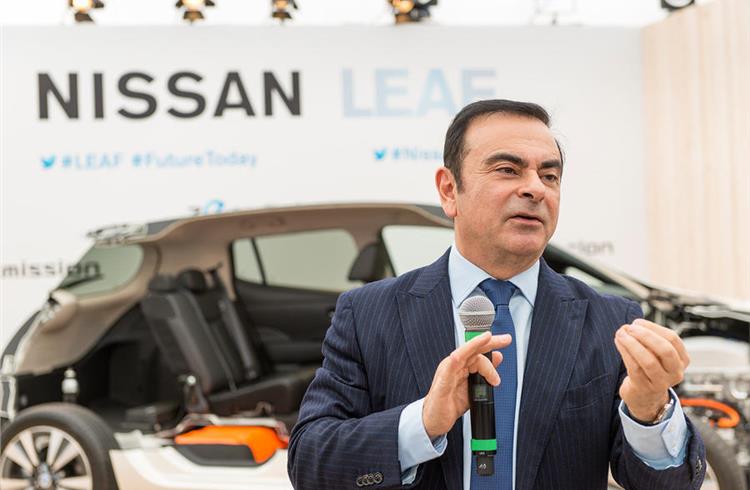 Carlos Ghosn is set to be removed from his role as Nissan chairman and representative director after an internal investigation found that he has under-reported his salary to Japanese authorities. The firm said it has also uncovered evidence of other "significant acts of misconduct" by Ghosn.

Nissan said the misconduct, which involved both Ghosn and fellow representative director Greg Kelly, came to light following a whistleblower report, prompting an internal investigation that has been ongoing for several months. In Japanese business, the representative director role is the most senior executive managing role, reporting directly into the board of directors.

Opinion: taking stock of Nissan's claims about Ghosn - and their impact

According to Japanese news agency Kyodo, Ghosn is believed to have understated his income by 5 billion yen over five years, a total of around £34 million.

In a press conference, Nissan CEO Hiroto Saikawa confirmed that both Ghosn and Kelly has been arrested by authorities. He said that it was his priority to minimise the impact on Nissan and its employees, and that the board would also look at ways of preventing such issues occuring in the future.

During the conference, Sakawa  said he was unable to give full details of the acts of misconduct, but said: "It’s very difficult to express it in words. Beyond being sorry, I feel big disappointment and frustration and despair. I feel despair, indignation and resentment. As the details are disclosed, I believe people will feel the same way that I feel today."

Saikawa said the board would meet on Thursday to remove both men from their roles and discuss future plans. He said that 'independent directors' would join the Nissan board going forward, and a committee led by independent directors would be established to look at how to prevent such issues in the future.

As well as his role with Nissan, Ghosn is the chairman of the Renault-Nissan-Mitsubishi Alliance, which encompasses 10 brands and is one of the world's three largest car groups.

Saikawa said that the Alliance would not be affected by the move – despite the fact Ghosn currently remains chairman and CEO of Renault. "The partnership among the three entities will not be affected by this event," said Saikawa. "We will work closely with Alliance partners to minimise the impact on Alliance efforts."

In a statement confirming the news, Nissan said: “The investigation showed that over many years, both Ghosn and Kelly have been reporting compensation amounts in the Tokyo Stock Exchange securities report that were less than the actual amount in order to reduce the disclosed amount of Ghosn’s compensation.

“Also, in regard to Ghosn, numerous other significant acts of misconduct have been uncovered, such as personal use of company assets, and Kelly’s deep involvement has also been confirmed.

“Nissan has been providing information to the Japanese public prosecutor's office and has been fully cooperating with their investigation. We will continue to do so.”

Nissan said that, because the misconduct “constitutes clear violations of the duty of care as directors”, CEO Hiroto Saikawa will propose that the company’s board of directors promptly remove both Ghosn and Kelly from their roles with the company.

Ghosn's Nissan tenure
Ghosn joined Renault in 1996 and was named COO of Nissan in 1999, when the French firm bought a major stake in its Japanese rival. He was named Nissan’s chairman in 2000 and CEO the following year, although he stood down from the latter role last year. During his press conference, Saikawa suggested that, in his personal opinion, the "dark side" of Ghosn's long run in the chairman role may have been a "negative aspect".

Saikawa also suggested that the concentration of power within the Alliance to Ghosn would not be repeated, saying: "In the future we will make sure we don’t rely on a specific individual, but rely on a more sustainable structure, so we need to talk to the partners and this is an opportunity to revise the way we work."

Kelly joined Nissan in 1988, working in its North American division, and has largely worked as a director and vice president in human resources since then. He has been a representative director since June 2012.

Renault's response to allegations
Since 2005, Ghosn has also served as CEO and chairman of Renault, and he had been set to continue in that role until 2022. In addition, he has been chairman of Mitsubishi since 2016, when Nissan acquired a stake in its compatriot firm.

Shortly after Saikawa's press conference on Monday evening in Japan (lunchtime in Europe), Renault said its board of directors would meet to discuss the claims shortly.

The statement read: "Philippe Lagayette, as lead independent director of Renault, in liaison with Board Committee Chairs Marie-Annick Darmaillac and Patrick Thomas, have acknowledged the contents of Nissan’s press release of today.

"Pending provision of precise information from Carlos Ghosn, Chairman and Chief Executive Officer of Renault, the above directors wish to express their dedication to the defense of Renault’s interest in the Alliance. The Board of Directors of Renault will be convened very shortly."

Mitsubishi proposes Ghosn removal
Mitsubishi Motors, which is part-owned by Nissan, has issued a statement that, "since the alleged misconduct is related to a corporate governance and compliance issue", it will propose Ghosn is removed as chairman of the company and representative director by its board of directors.

The statement added: "We will readily conduct an internal investigation on whether Ghosn has been engaged in the misconduct like the above within MMC."

Following that report, Nissan's global depository receipts fell more than 11% in Japan before trading closed, while shares in Renault have so far dropped by more than 8%.