The latest driver assistance technology will be an expansion of Nissan’s ‘ProPILOT’ system that enables hands-off driving while cruising in a given lane. 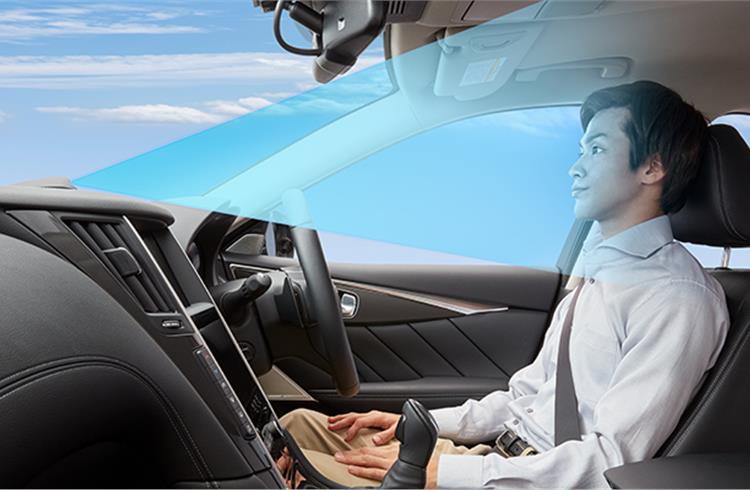 Nissan unveiled its latest driver assistance technology, combining navigated highway driving with hands-off single-lane driving capabilities. Expanding on the award-winning ‘ProPILOT’ system, the technology will debut on the Japanese-market Nissan Skyline in the fall of 2019.

Designed for an on-ramp to off-ramp (ramp-to-ramp) highway driving, the new system engages with the vehicle's navigation system to help manoeuvre the car according to a predefined route on designated roadways. For the first time, the system also enables hands-off driving while cruising in a single lane.

To enable the latest functions of the new system, drivers must first set their destination in the navigation system, creating a predefined travel route. Once the car enters the highway, the new system's navigated driving becomes available. Upon activation using a predefined route, the system will assist the driver with traveling on a multi-lane highway until reaching the highway exit on a predefined route — helping to handle passing, lane diversions and lane exiting.

The new ProPILOT also enables hands-off driving while cruising in a given lane. When the vehicle approaches a road divide, or when passing a slower vehicle is possible, the system judges the appropriate timing of branching off or passing based on information from the navigation system and 360-degree sensing. Intuitive audio and visual guidance is given to the driver, who is prompted to put both hands on the steering wheel and confirm the start of these operations with a switch. 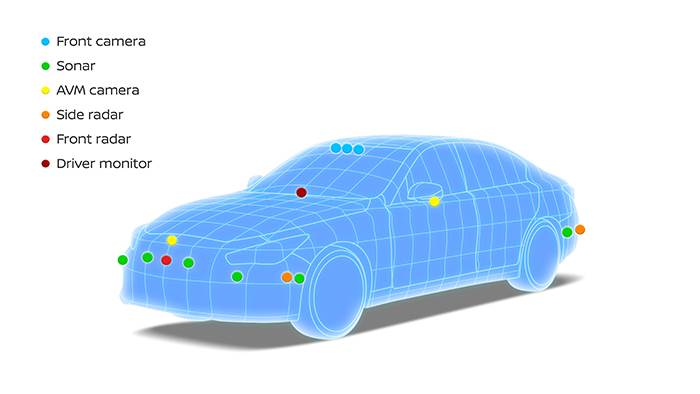 The vehicle uses a combination of cameras, radars, sonars, GPS and 3D high-definition map data (HD map) to provide 360-degree, real-time information of the surrounding environment and the vehicle's precise location on the road. The system uses this information to provide a smooth driving experience, similar to that produced by an experienced driver. A monitoring system in the cabin continually confirms that the driver's attention is on the road.

ADAS through audio and visual cues
Audio cues and visual notifications alert the driver when the navigated driving feature becomes available (upon entering the highway and using a predefined route set in the navigation system).

The driver can start navigated driving by operating a switch. Once activated, the system will help drive the vehicle in the center of a given lane and maintain a certain distance with the preceding vehicle, keeping within a speed set by the driver.

Hands-off driving is possible when driving in a single lane as long as the driver's attention is on the road ahead and the driver is prepared to take manual control of the steering wheel when conditions of the road, traffic and vehicle require it.

If the preceding vehicle is driving more slowly than the speed set by the driver, and the system detects that it can pass, the driver will be notified through audio and visual guidance. The driver can agree to pass by placing both hands on the steering wheel and operating a switch. Upon the driver's confirmation, the vehicle will smoothly move into the passing lane. Once it has passed the slower vehicle and the system has determined that it is possible to return to the driving lane, the system requests confirmation from the driver to bring the vehicle back into the original lane.

When wishing to initiate a lane change, the driver places both hands on the steering wheel and activates the turn signal. The vehicle will change lanes once the system has determined that a lane change is possible.

The single-lane highway version of ProPILOT debuted in 2016 on the Nissan Serena minivan in Japan and has won accolades including the Japan Car of the Year Innovation Award.

ProPILOT (known as ProPILOT Assist in the U.S.) is found on several Nissan models around the world including the 100% electric Nissan LEAF, and best-selling Qashqai, X-Trail, Altima and Rogue.

More than 350,000 Nissan vehicles on the road are equipped with the proven ProPILOT driver assistance technology, setting a firm foundation for the next stage of ProPILOT – the new Japanese-market system, ProPILOT 2.0.