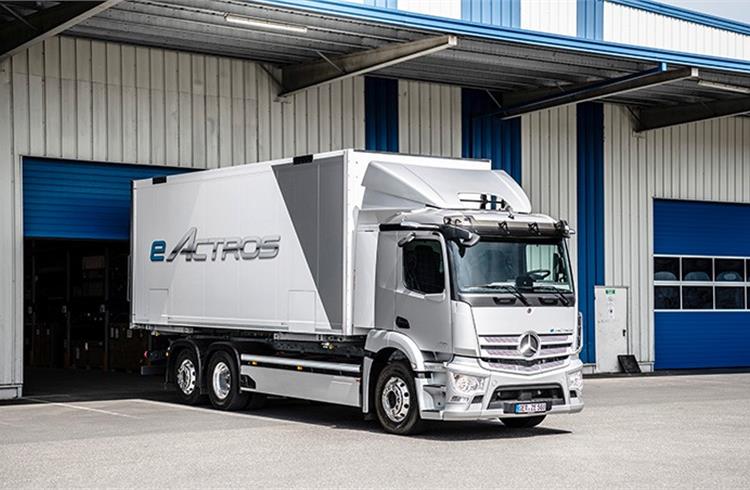 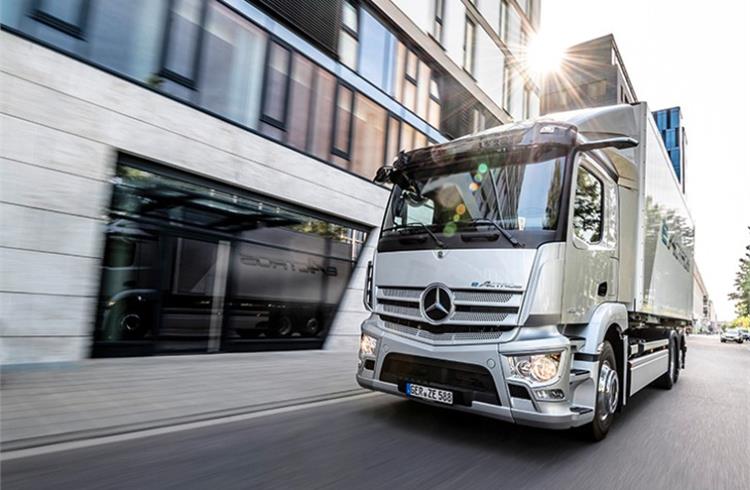 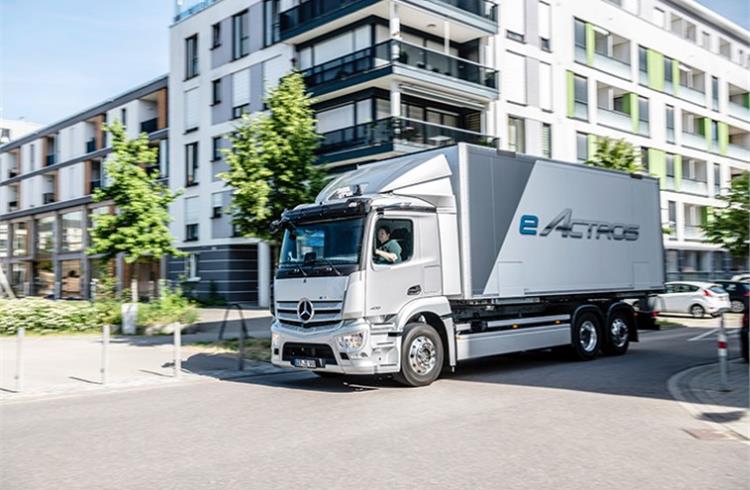 Mercedes-Benz Trucks today had the world premiere of its battery-electric eActros for heavy-duty distribution haulage. This is the launch of the truck maker’s first electric series-production truck.

“We have to acknowledge that transport is a part of the problem when it comes to climate change. At the same time, we can and we will be part of the solution. We start with our eActros that has covered more than half a million kilometers on public roads,” said Karin Radström, Member of the Board of Management at Daimler Truck AG and responsible for Mercedes-Benz Trucks.

After Mercedes-Benz Trucks had presented the concept vehicle for a heavy-duty distribution haulage truck for urban areas at the IAA 2016 for Commercial Vehicles in Hanover, practical testing of 10 eActros prototypes in co-operation with customers in Germany and other European countries began in 2018. The objective of the ‘eActros Innovation Fleet’ was to launch a series-ready eActros on the market in 2021.

"Development of the eActros focussed on the partnership with our customers. Everything that we learned from the Innovation Fleet is now being incorporated in series production. Compared with the prototypes, several features such as range, drive power and safety have been considerably improved in the series-production model," explained Andreas von Wallfeld, Head of Marketing, Sales and Services at Mercedes-Benz Trucks.

Two integrated e-motors and 400km range
At the technological heart of the eActros is the drive unit with two integrated electric motors along with a two-speed transmission. According to Daimler Trucks, “Both motors provide for impressive ride comfort and great vehicle dynamics, while the quiet and emission-free electric drive means the truck can also be used for night deliveries and entry into inner-cities with driving bans for diesel vehicles.”

Depending on the version, the eActros draws its power from three or four battery packs – each with a capacity of around 105 kWh. Thanks to a maximum capacity of 420 kWh2, a range of up to 400 kilometres is realistic. The eActros can be charged with up to 160 kW: When connected to a regular 400A DC charging station, the three battery packs need a little longer than 1 hour to charge from 20 to 80 percent. "Thus the eActros is perfectly equipped for its daily operations in distribution transport with regard to availability and performance," added von Wallfeld.

In order to assist haulage companies step-by-step as they switch to electromobility, Mercedes-Benz Trucks has incorporated the eActros into a comprehensive system which includes consultant and service products for customers and in turn the best possible vehicle utilisation, optimisation of total costs and the setting-up of a charging infrastructure. Furthermore, the electric truck features a high degree of digitisation and connectivity.

In the latest generation of the Actros with a conventional diesel drive, Mercedes-Benz Trucks has already given an impressive demonstration of the standard of safety that is possible on roads today, and of what the manufacturer is doing in pursuit of its vision of accident-free driving.

The eActros has high levels of active safety, for example in the form of systems installed as standard such as MirrorCam, Sideguard Assist S1R or the fifth generation of Active Brake Assist (ABA) with pedestrian detection, but also on challenges associated with electric vehicles and their high-voltage systems.

From autumn 2021, the series production model will be produced in Mercedes-Benz Trucks' largest truck assembly plant in Worth am Rhein. In recent months intensive preparations have been made for the new production processes there. This includes the construction of a new assembly line. In an initial phase the series-production model of the eActros will be available in Germany, Austria, Switzerland, Italy, Spain, France, the Netherlands, Belgium, Great Britain, Denmark, Norway and Sweden. Further markets will follow.