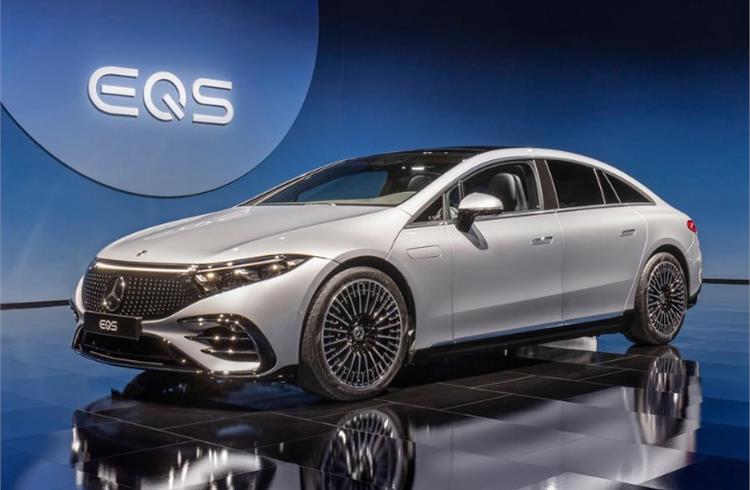 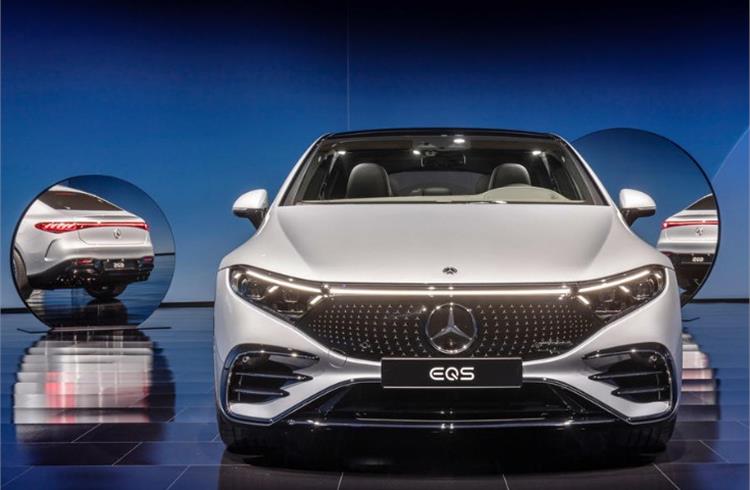 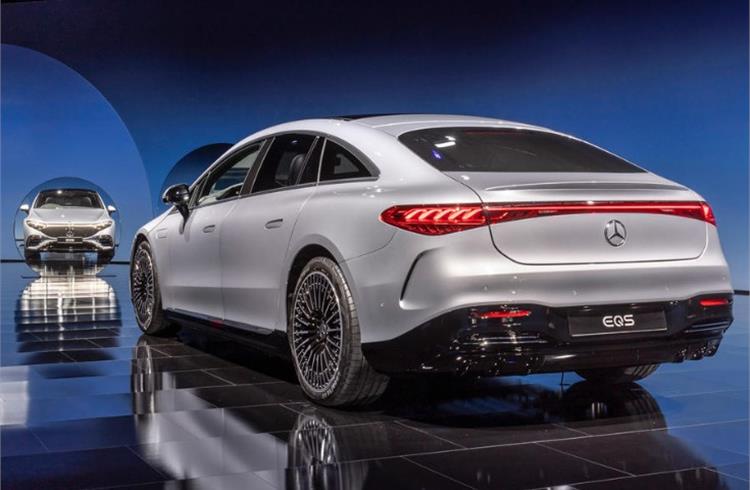 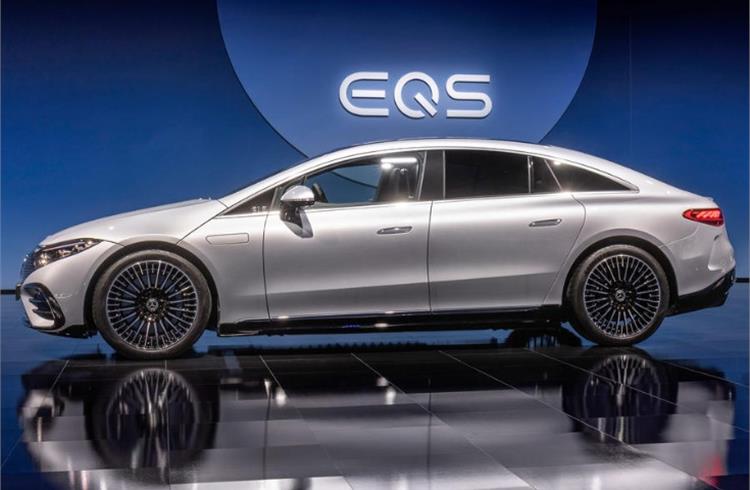 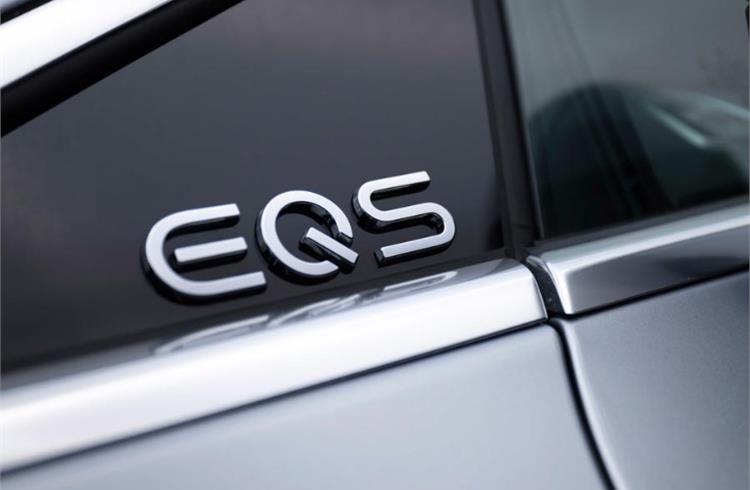 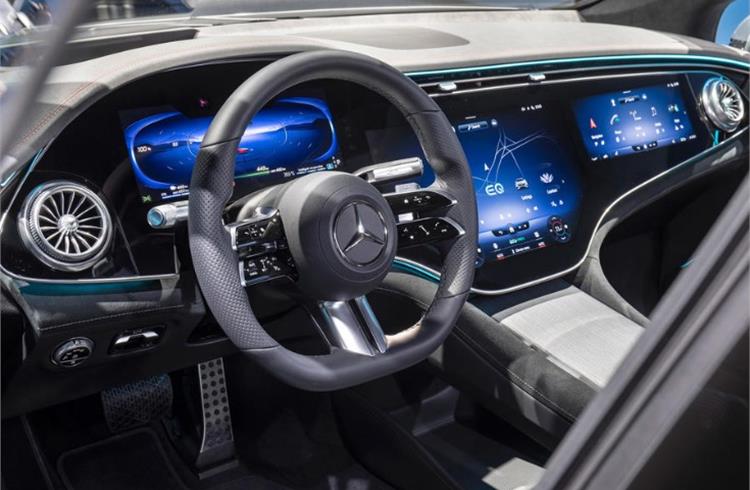 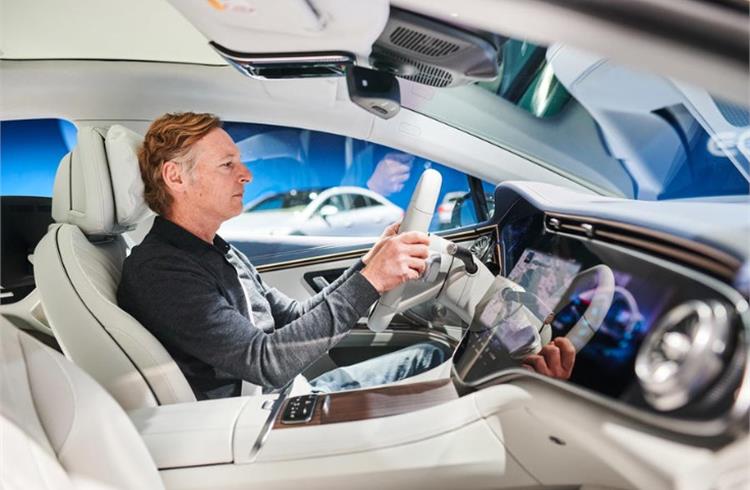 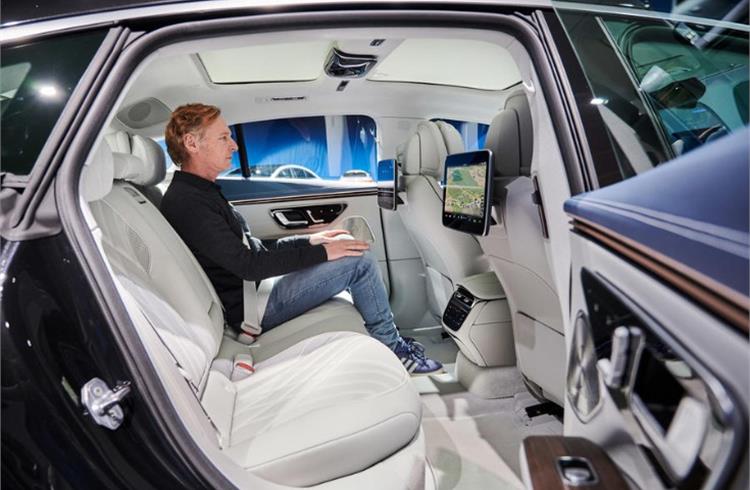 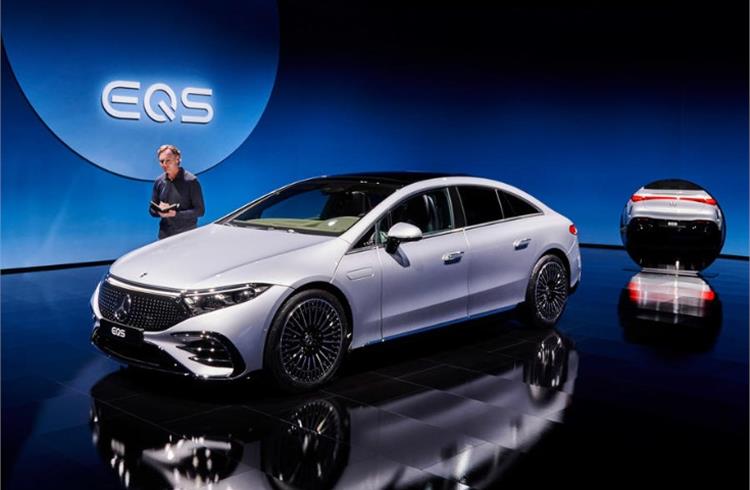 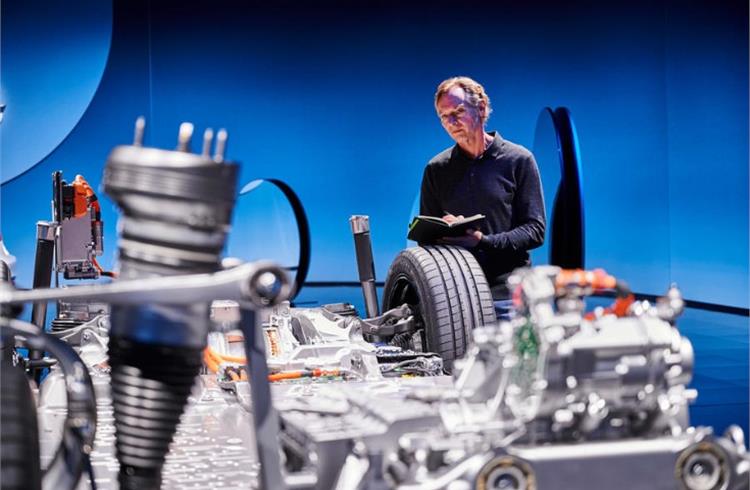 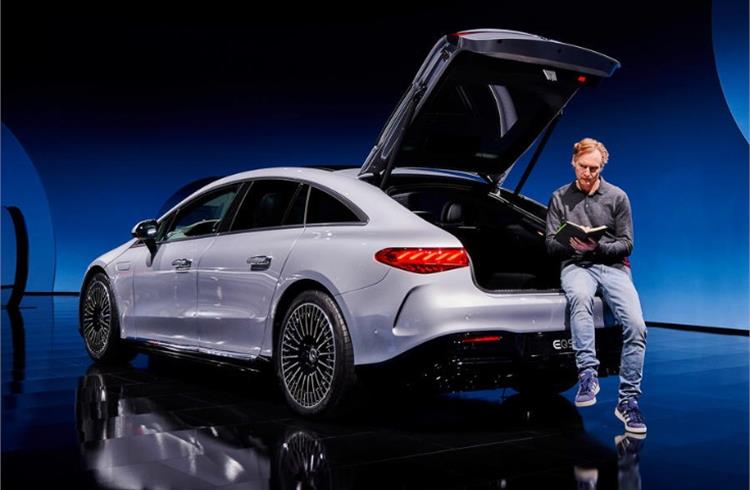 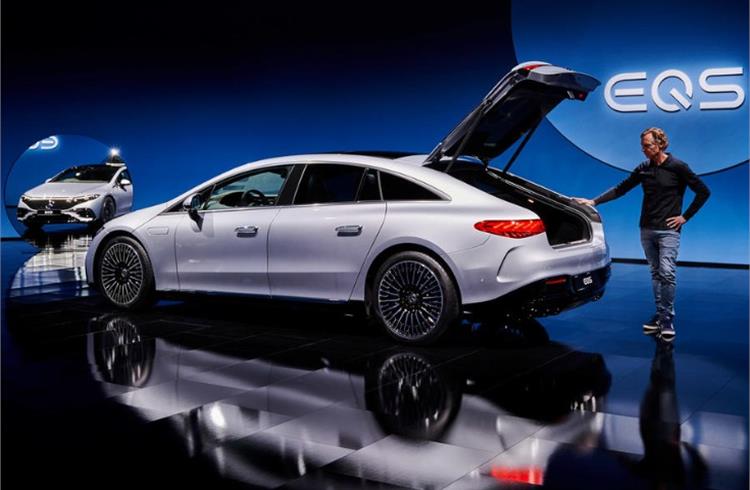 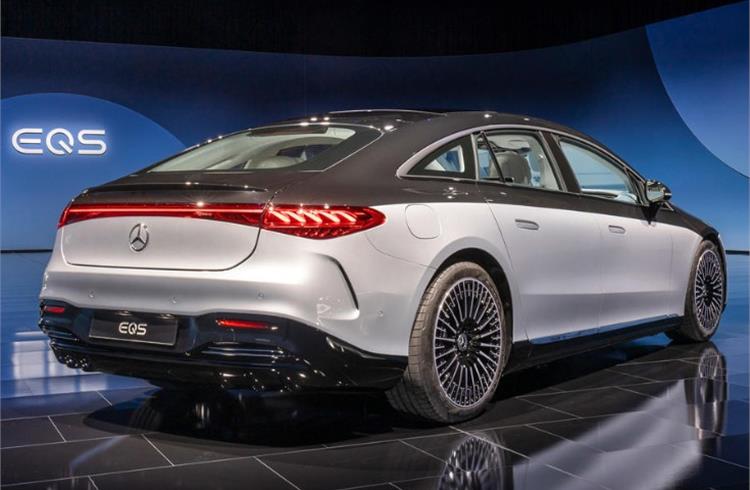 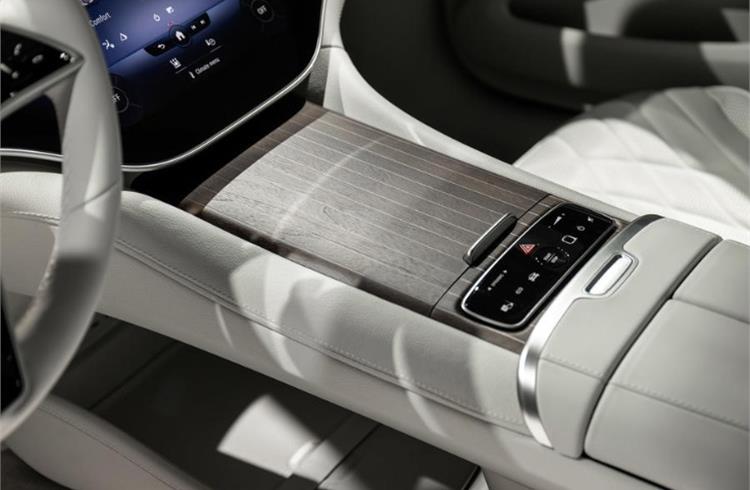 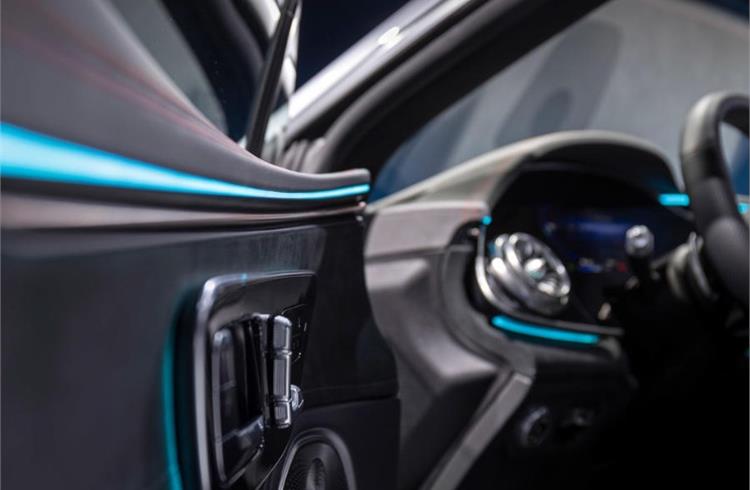 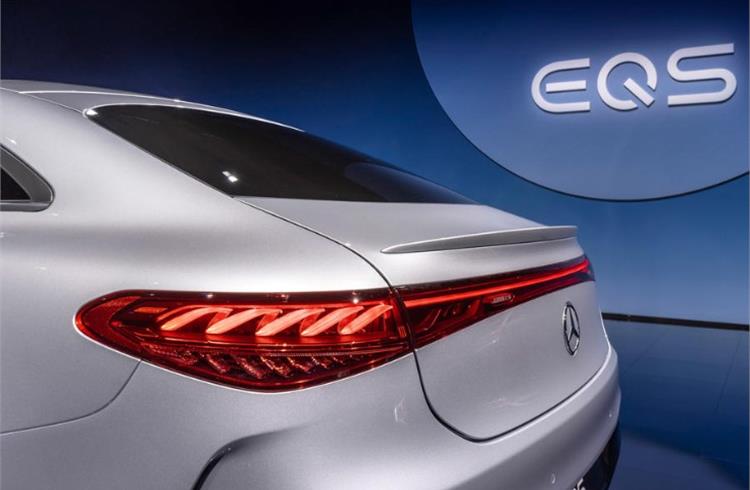 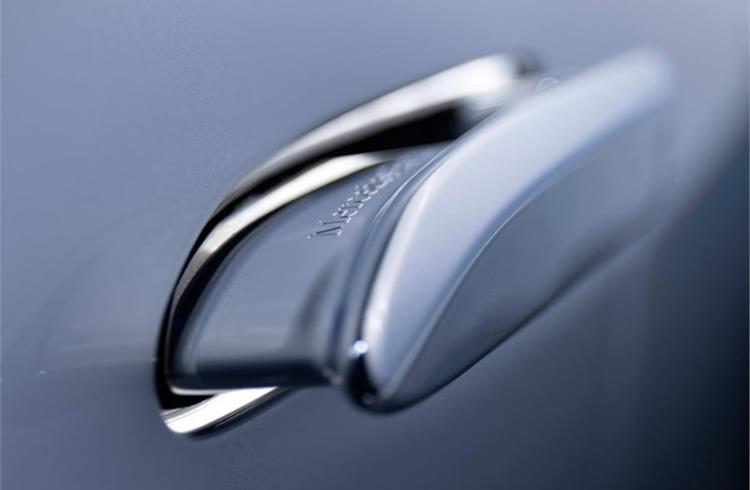 The Mercedes-Benz EQS has been revealed and features standing-setting aerodynamics, over-the-air software update capability, an advanced interior and a new electric drivetrain that will offer more than 700hp in its most potent form.

The EQS is the first in an extended range of EQ models to use Mercedes-Benz’s dedicated EVA (Electric Vehicle Architecture) platform and has been conceived as an electric-powered equivalent to the S-Class sedan – alongside which it will be produced in Sindelfingen, Germany.

The new EVA platform, which is also earmarked for the upcoming EQE, EQE SUV and EQS SUV, brings air suspension at each corner and a rear-wheel steering system with a standard 4.5deg of rear steering angle.

Design and styling
The production EQS stays largely true to the 2019 EQS Vision concept, with an uncharacteristic cab-forward profile. Its appearance is dominated by what Mercedes describes as a “one-bow roofline” that stretches back to form a heavily angled liftback-style tailgate. Other key styling elements include a black grille panel bookended by a pair of angular headlights - themselves joined by a horizontal light bar. The fully enclosed light unit can be ordered with an optional three-dimensional star pattern.

The aluminium-bodied EQS also features a fixed clamshell bonnet, which wraps around the side to form the top of the front wheel arches. Rather than enclosing a front storage area, it is designed to be opened only during servicing. The filler bottle for the windscreen washer is integrated into a flap within the front left-hand-side wing, which swivels out when pressed.

The doors are frameless and feature the same flush handles as those available as an option on the S-Class, while the generously dimensioned wheel arches can accommodate alloys ranging from a standard 19-inch to 22-inch in diameter.

Size matters
The EQS measures 5,216mm long, 1,926mm wide and 1,512mm tall and receives a lengthy, 3,210mm wheelbase - 106mm longer than the latest-gen S-Class's (coming to India this year) - which provides it with relatively short overhangs.

Despite the car's generous dimensions, Mercedes claims the EQS betters the facelifted Tesla Model S for aerodynamic efficiency with a drag coefficient of 0.20.

The inside story
The interior of the EQS is dominated by Mercedes' new digital Hyperscreen – a one-piece curved screen that stretches across the width of the dashboard and houses three digital displays – one for the instruments, one for the central infotainment and air-con functions, and another ahead of the front passenger.

It is controlled by the latest generation of MBUX – an operating system that supports touch and conversational speech input as standard as well as over-the-air software capability that will allow owners to update various features, including a larger steering angle of 10.0deg for the EQS’s rear-wheel steer system, which gives a claimed 10.9m turning circle, together with subscriptions, temporary feature activations and what Mercedes calls “free software test phases”.

A high-set centre console divides the front seats, while a near-flat floor helps to liberate greater rear-seat accommodation than that of the S-Class.

Although the EQS does without a front storage compartment like many rivals, its claimed 610 litres of boot space is 60 litres more than that offered by the S-Class and it extends to 1,770 litres when the split folding rear seats are stowed.

The heart of the EQS
In the rear-wheel-drive EQS 450, a rear-mounted asynchronous electric motor delivers 334hp and 458Nm of torque, while the initial range-topping EQS 580 puts a motor on each axle for a combined 523hp and 856Nm.

Both cars get a 107.8kWh (net) lithium ion battery, with energy content described as being up to 26 percent higher than that used by the EQC and a claimed range of up to 770km on the WLTP test cycle.

A smaller-capacity battery is due to be offered next year for a lower range and list price, although its details have not yet been revealed.

Also planned is an even more powerful version of the EQS from Mercedes' AMG performance car offshoot. Set to be revealed later this year, it runs the same dual-motor set-up as the EQS 580 but will take the total power output beyond 700hp.

Will it be launched in India?
Autocar India, sister title to Autocar Professional, confirm that the EQS will come to India sometime early next year. The German brand currently sells the EQC electric vehicle in India and has lined up a slew of launches in its combustion-engined range for India this year with the next one being the second-gen GLA SUV that will be launched by end of the month.