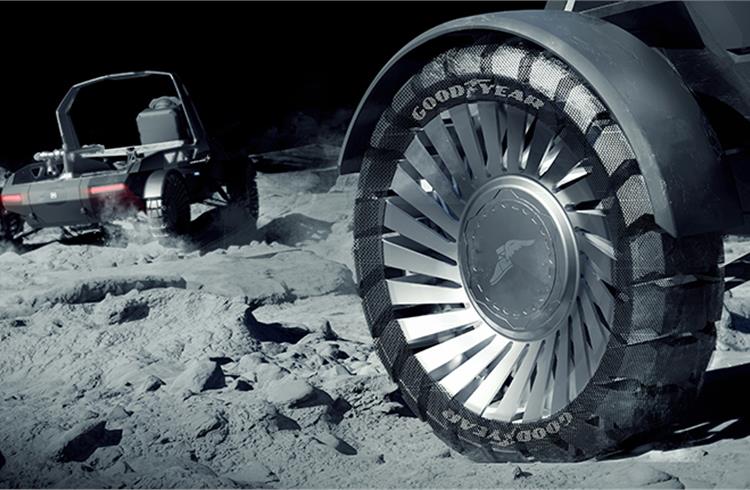 Only five percent of the Moon’s surface has been explored by the human race, and to reach the other 95%, NASA astronauts on the Artemis program are going to need some serious wheels.

Fifty-three years ago, Goodyear’s non-pneumatic XLTs (Experimental Lunar Tyres) were the first to ever leave a tyre track on the moon, when the tyre maker supplied essential products for NASA’s Apollo program, including the Apollo 11 mission which landed on the Moon on July 20, 1969.

Now, Goodyear is once again focusing on lunar vehicle tyres by joining Lockheed Martin in its development of a lunar mobility vehicle.

As is known, Lockheed Martin and General Motors have teamed up to design the next generation of lunar rovers, capable of transporting astronauts across farther distances on the lunar surface. Unlike the Apollo days when the rovers only travelled four miles from the landing site, Artemis astronauts will go farther and explore more of the Moon’s surface than ever before to conduct critical scientific research.

Unlike the Apollo rovers that only traveled 4.7 miles (7.6km) from the landing site, the next-generation lunar vehicles are being designed to traverse significantly farther distances to support the first excursions of the Moon's south pole, where it is cold and dark with more rugged terrain.

Autonomous, self-driving systems will allow the rovers to prepare for human landings, provide commercial payload services, and enhance the range and utility of scientific payloads and experiments.

Since Apollo, Goodyear has continued innovating alongside NASA to advance designs for a lunar vehicle tyre. The team of companies intends to be the first to establish extended-use commercial vehicle operations on the Moon.

“NASA’s Artemis program to live and work on the Moon has a clear need for lunar surface transportation that we intend to meet with vehicles driven by astronauts or operated autonomously without crew,” said Kirk Shireman, vice president of Lunar Exploration Campaigns at Lockheed Martin. “We’re developing this new generation of lunar mobility vehicle to be available to NASA and for commercial companies and even other space agencies to support science and human exploration. This approach exemplifies NASA’s desire for industry to take the lead with commercial efforts that enable the agency to be one of many customers.”

Goodyear is drawing from its advanced airless tyre technology used on Earth with micro-mobility, autonomous shuttles and passenger vehicles, to advance lunar mobility and withstand the challenging conditions on the Moon. The companies are already applying existing expertise to the project including testing concepts in lunar soil test beds.

“Everything we learn from making tyires for the Moon’s extremely difficult operating environment will help us make better airless tyres on Earth,” said Chris Helsel, senior vice-president, Global Operations and Chief Technology Officer at Goodyear. “This will contribute to our end goal of enabling mobility no matter where it takes place. Just as important, it is an honor to write history with this prestigious company who knows how to make giant leaps in exploration and mobility.”

The Apollo lunar rovers were purposely built for just a few days of use on excursions within five miles of their landing sites. Future missions will need to traverse rugged terrain over much longer distances while operating in greater temperature extremes. New tyre capabilities will need to be developed for years of durability and even survive the night that sees temperatures of below -250 degrees Fahrenheit and daytime temps of over 250 degrees Fahrenheit.

Lockheed Martin along with other companies like GM, Goodyear, MDA of Canada is working with NASA and global space agencies. Lockheed Martin says it has also helped NASA explore every planet of our solar system, and continues to develop new technologies for future space missions.

Together, the teams are applying unique perspectives and shared expertise to new challenges and market approaches that are being considered for the first time. The companies expect to have its first vehicle on the surface of the Moon in time to support NASA’s first landed mission that will have the first woman and first person of color walk on the Moon, currently planned for 2025.