JATO Dynamics’ study finds that despite the drop, the European car market has recorded its second highest January volume in a decade. 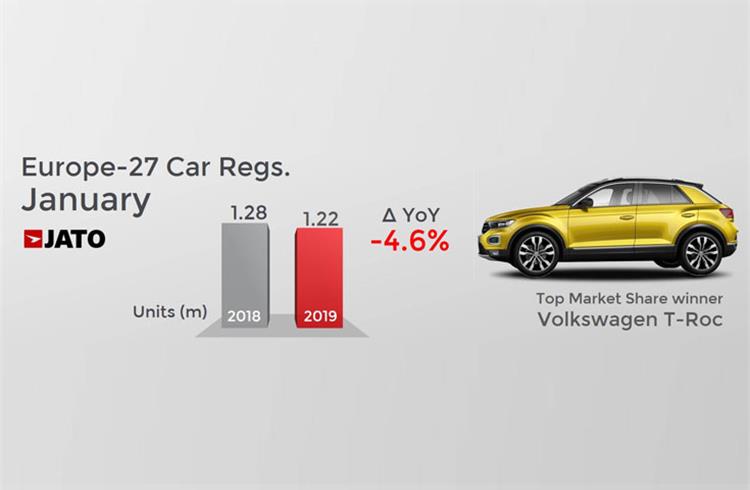 The European car market registered its fifth consecutive month of decline in January 2019, as registrations fell by 4.6 percent. However, it was the lowest monthly decline since the introduction of WLTP (Worldwide Harmonised Light Vehicle Test Procedure) in September 2018, and the second highest January volume of the last 10 years, as 1.22 million new cars were registered, says JATO Dynamics, a London based data analyst team report.

The overall fall in registrations was largely due to only Romania, Hungary, Denmark, Portugal and Greece recording growth, which are all small markets and not big enough in size to offset drops in the big five markets, or double-digit falls in midsize markets like the Netherlands, Belgium and Czech Republic.

The report says the demise of diesel looks set to continue in 2019, as volume fell by 18 percent in January and counted for just 33 percent of total registrations. This came as a result of a big decline in Italy, where volume was down by 30 percent, translating to the country losing its title of being the biggest market for diesels. The Italian market was outsold by Germany – where demand grew by 8 percent – the only country to post an increase other than Estonia.

Diesel declines, BEVs start seeing acceptance
In terms of OEMs, Volkswagen, Volvo, Seat and DS were the only brands to post diesel registration increases. Meanwhile, petrol cars accounted for 58 percent of total registrations, as volume increased by 2.1 percent. This marks almost 4 more percentage points than the total recorded in January 2018 and JATO Dynamics says this confirms the continuous shift away from diesel and towards petrol/AFVs (alternate fuel vehicles).

SUV sales witness slowdown
Although SUV registrations continued to grow, there was a significant slowdown to just 6.1 percent. However, Munoz said “This can be blamed on the current situation of the European market rather than a lack of consumer interest in the segment."

The introduction of 14 new models over the course of 2018 also resulted in growth for the segment, and in terms of small SUVs registrations in January they performed well recording 171,700 registrations. The volume was up 13 percent as the Volkswagen T-Roc led the sub-segment for the first time. Volkswagen also led the compact SUV sub-segment, having posted an increase of 4 percent to 191,000 registrations. Elsewhere, city-cars were the fourth best-selling segment, and also posted an increase thanks to strong results from PSA, Toyota and Renault-Nissan. 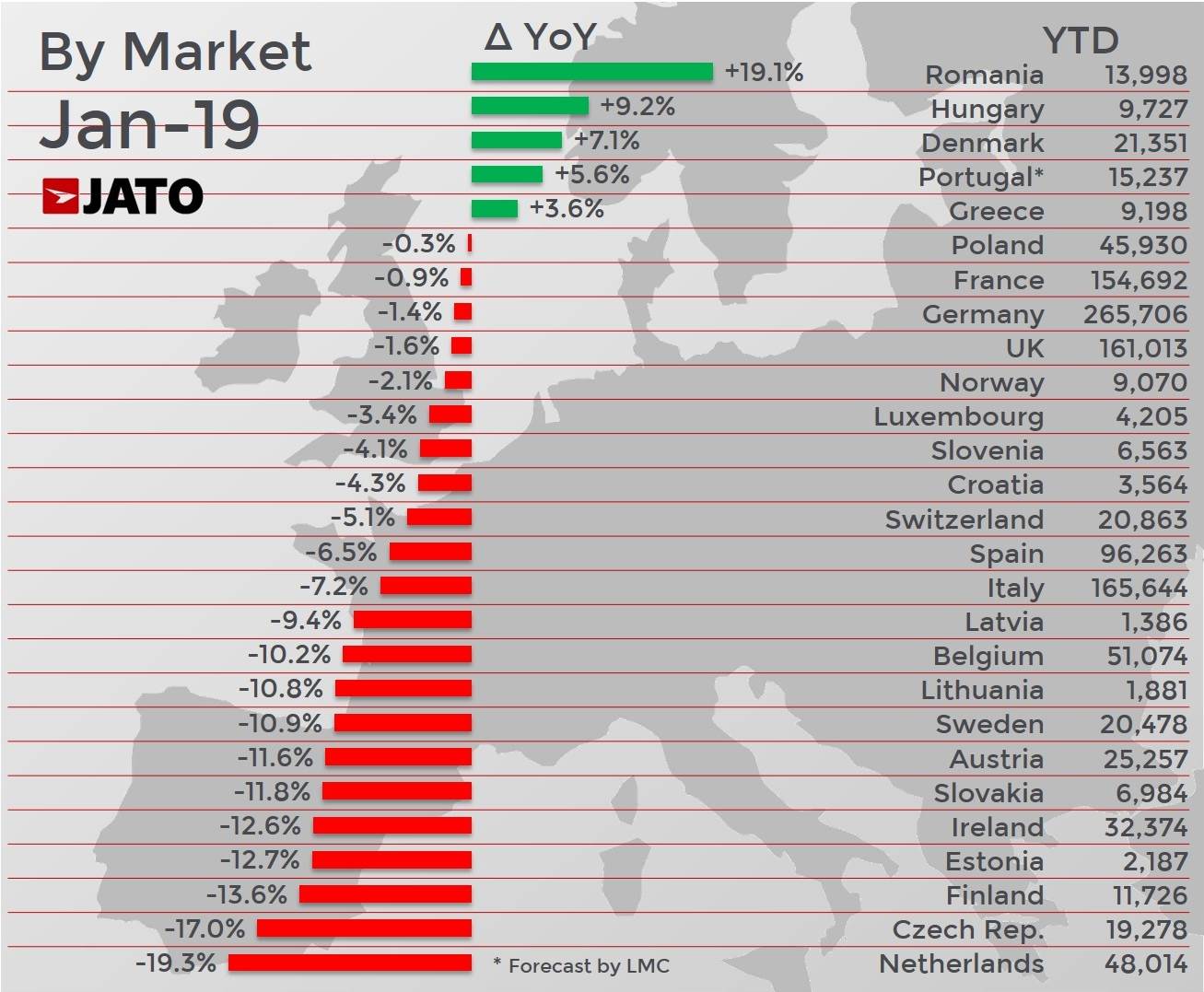 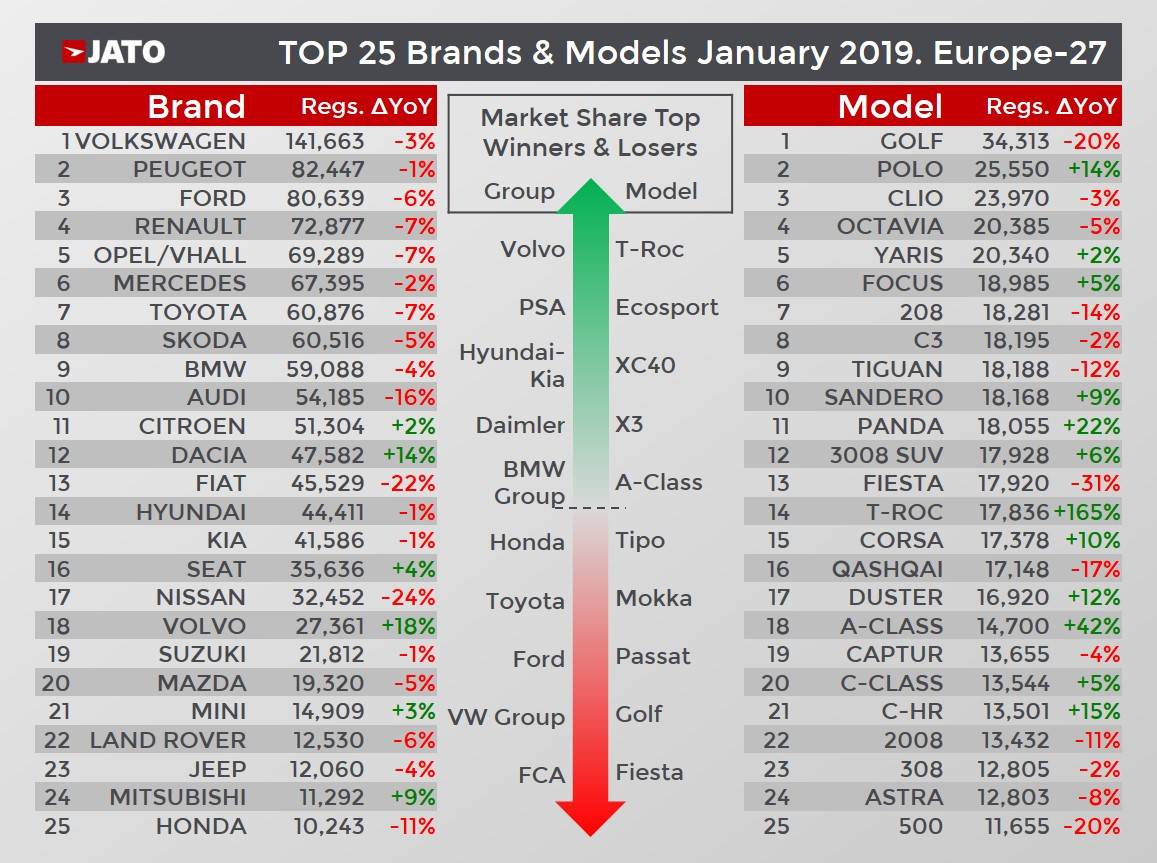 However, JATO found FCA continued to lead, recording almost 30 percent of the market share. Volkswagen Group continued to lead the market, despite their market share falling from 24.6 percent in January 2018 to 24.2 percent last month. The German car maker was negatively affected by big declines at its two main premium brands (Audi and Porsche) as Seat and Lamborghini were the only brands to grow. For the first time, Volkswagen Group sold more SUVs than any other type of car, reflecting the success of its latest launches in the segment, as it was also the overall top-selling SUV maker during the month.

PSA was the second biggest car maker during January, as volume fell by only 2 percent to 206,100 registrations, equivalent to just 90,000 less than VW Group. Meanwhile, Opel/Vauxhall continued to fall in the rankings, mostly due to growing competition for the Mokka SUV. FCA saw the highest market share decline, falling from 6.6 percent in January 2018 to 5.8 percent last month. The Italian carmaker felt the effects of having an aging range, which even resulted in difficulties in its home market of Italy, where it posted the lowest January market share of the last 20 years. With the exceptions of Lancia and Abarth, all other brands posted a decline. Conversely, Volvo was the top market share winner of the month and the only brand to post an increase within the top 10 car makers.

UK car production falls due to slump in overseas demand