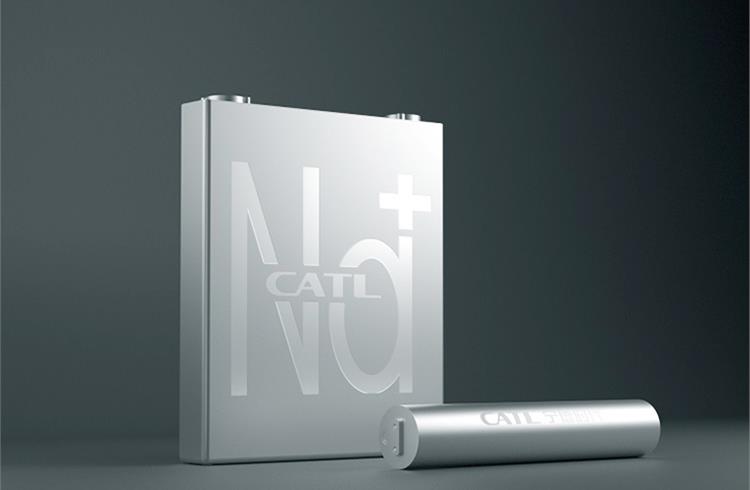 Contemporary Amperex Technology Co Ltd (CATL) has unveiled its first-generation sodium-ion battery, together with its AB battery pack solution, which is able to integrate sodium-ion cells and lithium-ion cells into one pack.

Sodium-ion batteries are billed as a new solution for the use of clean energy and transportation electrification, aimed at early realisation of the goal of carbon neutrality.

The sodium-ion battery has a similar working principle to the lithium-ion battery. Sodium ions also shuttle between the cathode and anode. However, compared with lithium ions, sodium ions have a larger volume and higher requirements regarding structural stability and the kinetic properties of materials. This has become a bottleneck for the industrialisation of sodium-ion batteries.

Based on a series of innovations in the chemistry system, CATL claims its first generation sodium-ion batteries have high-energy density, fast-charging capability, excellent thermal stability, great low-temperature performance and high-integration efficiency. The energy density of CATL’s sodium-ion battery cell can achieve up to 160Wh/kg, and the battery can charge in 15 minutes to 80% SOC at room temperature. Moreover, in a low-temperature environment of -20°C, the sodium-ion battery has a capacity retention rate of more than 90%, and its system integration efficiency can reach more than 80 percent.

India’s Sodion Energy bets on sodium-ion battery tech
In India, the Tamil Nadu-based Sodion Energy has been working on developing sodium-ion-based batteries for electric vehicles and energy storage needs since a couple of years. The company, set up by Pachayappa Baladhandayuthapani (Bala), former CTO of Ampere Vehicles, which produces electric scooters, e-autos and golf karts, is bullish on sodium-ion technology to power electric vehicles.

Sodium is one of the most abundantly available natural resources, particularly in sea water, which means that sodium-ion batteries can be produced in most parts of the world, at far less cost that lithium-ion batteries. The sodium battery chemistry is also free of cobalt and nickel. The chemistry allows for cells to be available in both aqueous and non-aqueous form. The energy density and lifecycle is very close to lithium cells, is almost 30 percent cheaper than LFP (battery chemistry) and has better thermal performance. Interestingly, Bala says the sodium-ion battery does not need high-performance BMS (battery management system), which also translates into cost saving and reduction in time to market. In terms of safety, the chemistry is said to have better safety, storage and transportation characteristics. It can be produced in cylindrical, pouch and prismatic format and is also easily recyclable.

Looming lithium-ion supply-demand issue
Global demand for EVs is billed to grow sharply. A Deloitte study has predicted that a third of all new cars sold globally will be electrified by the end of the decade, citing a radical shift in consumer sentiment. The firm estimates that 31.1 million electrified vehicles will be sold per year by 2030. The peak of petrol and diesel vehicle sales, it says, is likely to have occurred during the corona virus pandemic.

By 2030, pure-electric vehicles are expected to account for around 81 percent of all new EVs sold. This would mean massive demand for lithium-ion batteries, which likely could result in a supply-demand issue.
Will sodium-ion replace lithium-ion? Not in the near future but the technology holds the promise to reducing the EV industry’s reliance on expensive and turning difficult-to-source lithium.