Strong sales of petrol cars and the double-digit growth posted by electrified cars made up for a 12 percent drop in diesel registrations. 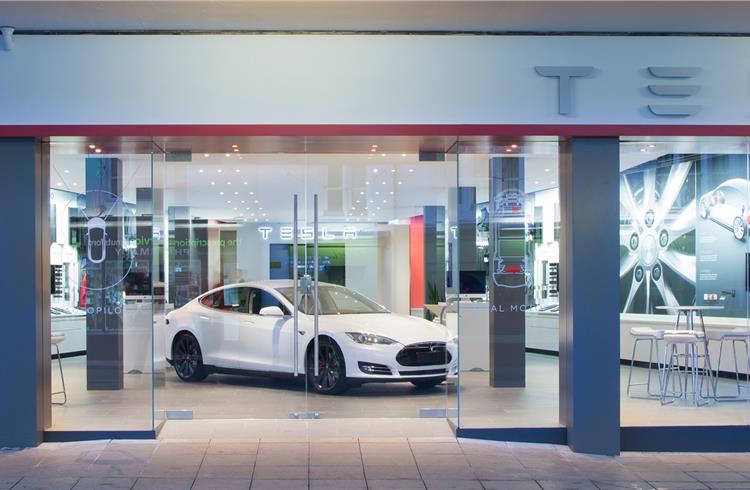 The European car market has stabilised in April 2019 after an extended period of decline. The month saw 1.34 million vehicles were registered – the same number as in April 2018, when the market posted its highest April volume of the last 10 years, says JATO Dynamics, a London based data analyst team report.

The year to date figures show that the overall market dropped by 2.5 percent, with 5.47 million registrations recorded so far in 2019.  In terms of country-wise sales, strong results in Spain, Italy, Poland and Switzerland offset the declines posted in the UK, Germany, Benelux, where the market was down by 2.4 percent, and Scandinavia, where the market was down by 13.5 percent. The strong sales of petrol cars and the double-digit growth posted by electrified cars made up for a 12 percent drop in diesel registrations. With the exception of Germany and Croatia, diesel registrations fell everywhere in Europe. The year to date figures show diesel’s volume has dropped by 15 percent during the first four months of 2019, accounting for 32.5 percent of the total market.

Pure electric car sales notch 71% growth
Registrations for electrified car continued to grow in April, totaling 91,200 units, making up for 6.9 percent of the total market. This, the research found, was largely due to an increase in demand for pure electric cars, where registrations increased by 71 percent to 22,900 units. 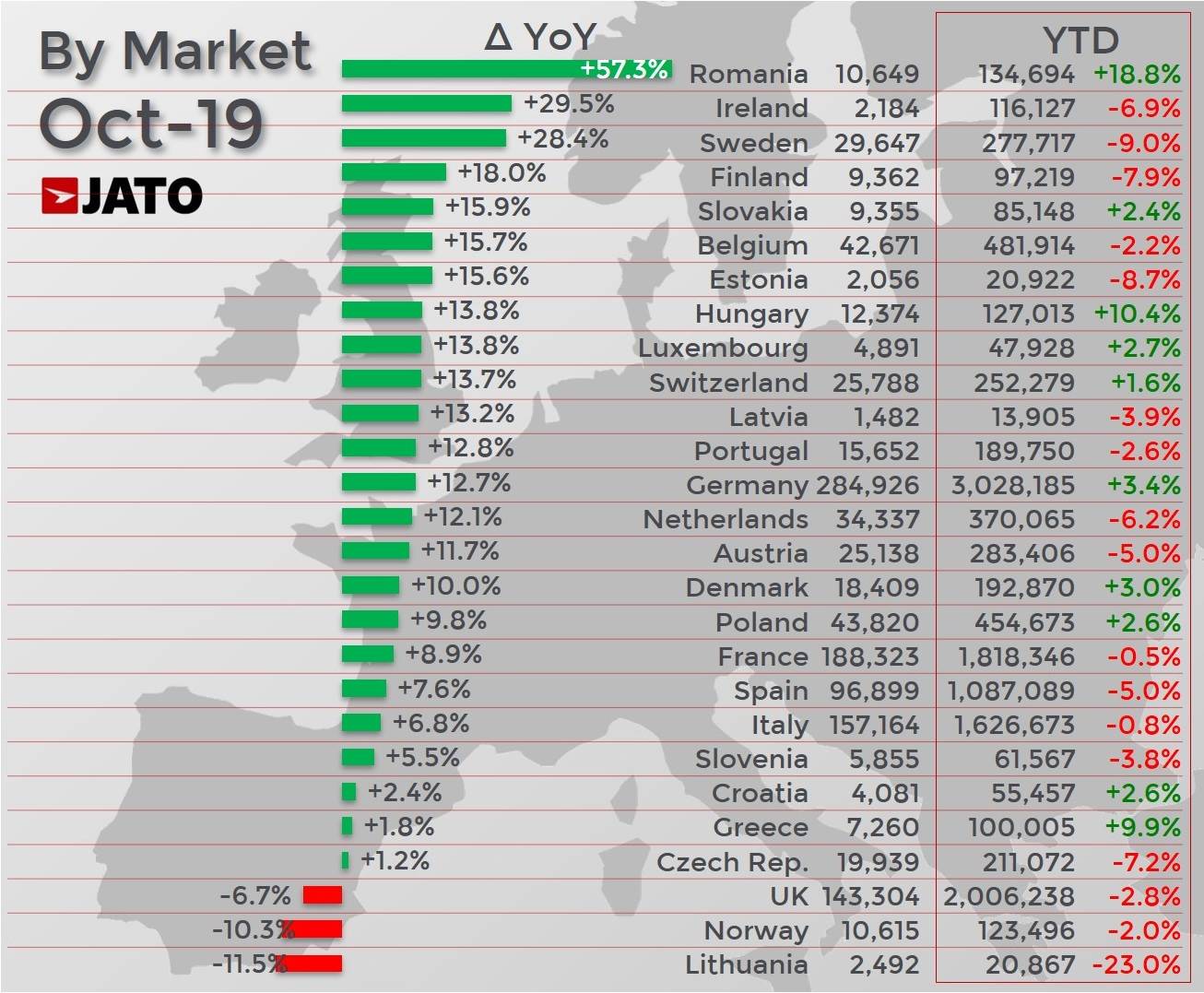 Although, Tesla was able to still post growth and led the BEV rankings, its overall volume returned to a normal level in April following March’s exceptional results, where the brand recorded 15,755 registrations of the Model 3. There were 3,700 Model 3 registrations during April, signifying that sales in March were a result of the long waiting list for the vehicle. However, “We should expect to see another boost of the Model 3 once it hits British dealers,” predicts Felipe Munoz, JATO’s global analyst.

SUVs continued to grow during the month, as the segment recorded 495,000 registrations – up by 11 percent YoY. The year to date figures show there has been 2.02 million SUV registrations since the start of 2019, a growth of 8 percent compared to same period last year. In April, the segment’s growth was driven by BMW Group (+29%), Volkswagen Group (+23%), PSA Groupe (+14%) and Hyundai-Kia (+14%). Demand for the Dacia Duster grew by a huge 30 percent in April, as the vehicle led the SUV rankings for the first time since its launch.

Toyota C-HR, RAV4 and Niro top-selling eSUVs
On the other hand, the Toyota C-HR, Rav4 and Niro were the top-selling electric SUVs, and the Audi Q3, BMW X1 and Audi Q2 led the premium SUV rankings. In contrast, demand for MPVs fell by 21 percent, with only 65,200 registrations recorded during April. It was closely followed by the LCV-derived van segment, which recorded 54,600 registrations as demand increased by 3 percent.

JATO expects the van segment to overtake the MPV segment, as it offers consumers vehicles with the same amount of interior space but at cheaper prices. In the breakdown by brands, Volkswagen continued to lead the market, but its volume fell by almost 7 percent due to declines in its three best-selling products – the Golf, Polo and Tiguan. Similarly, Ford’s volume was negatively affected by the Fiesta, Kuga and Ka+; Opel/Vauxhall lost ground despite the double-digit growth posted by the Crossland and Grandland, as the Corsa, Astra and Mokka fell in the rankings. Meanwhile, Audi also recorded a drop due to the results of the A3 and A4, while it sold 963 units of the E-Tron. 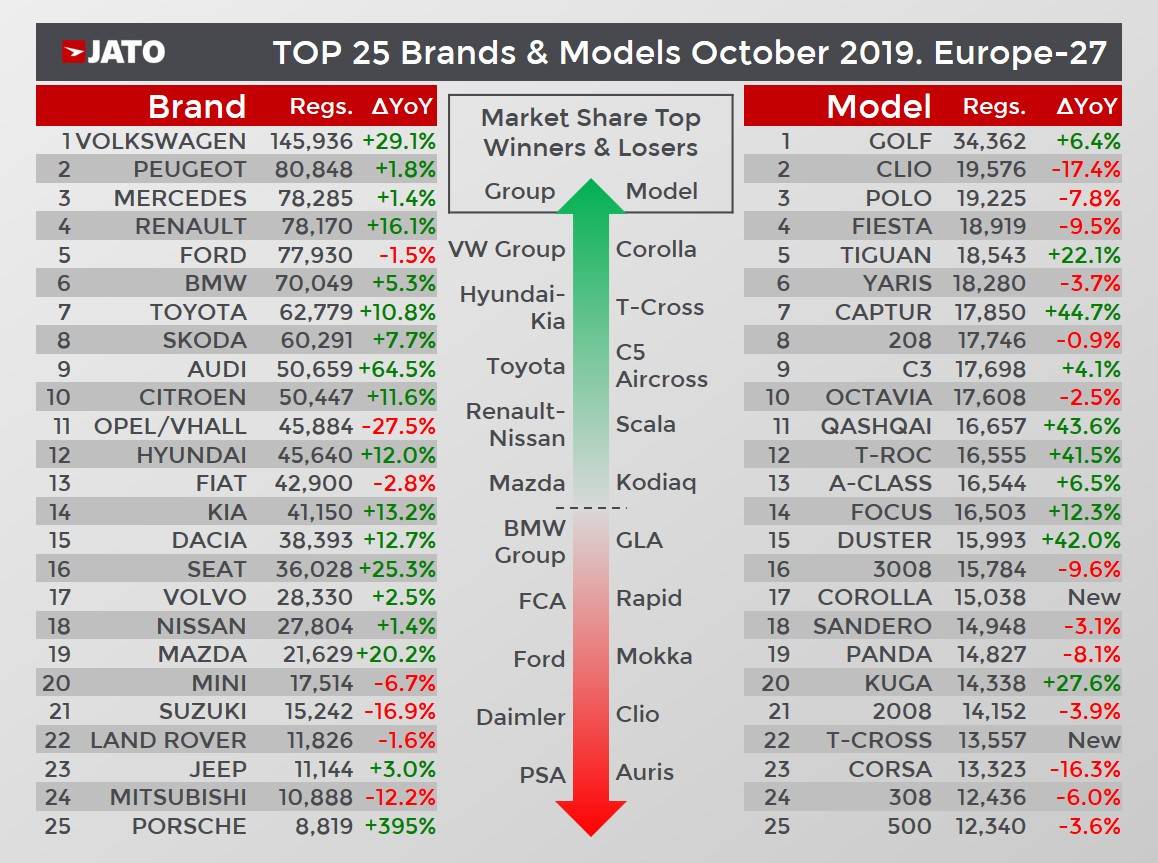 In contrast, April was a good month for BMW on the back of strong performance of the X1, 1-Series and the new 3-Series, which helped the company recorded 10,000 registrations as demand increased by 19 percent. Similarly, Peugeot saw a volume increase due the strong results of the 3008 and 108 – and it recorded 2,384 registrations of the newly introduced 508. Skoda also grew, with volume up by 3 percent on the back of demand for the Octavia and Karoq, while it recorded 704 registrations of the Scala.

Toyota had a stable month, as the 25 percent increase in demand for the Auris/Corolla offset the 16 percent drop in demand for the C-HR, and it registered 475 units of the Camry. Meanwhile, Fiat dropped by 1 percent due to declines of the 500, Tipo and 500L.