250,000th Skoda Kodiaq rolls out in less than two years

The milestone vehicle rolled off the production line in Kvasiny, Czech Republic; the large SUV is manufactured at a total of six plants worldwide including India. 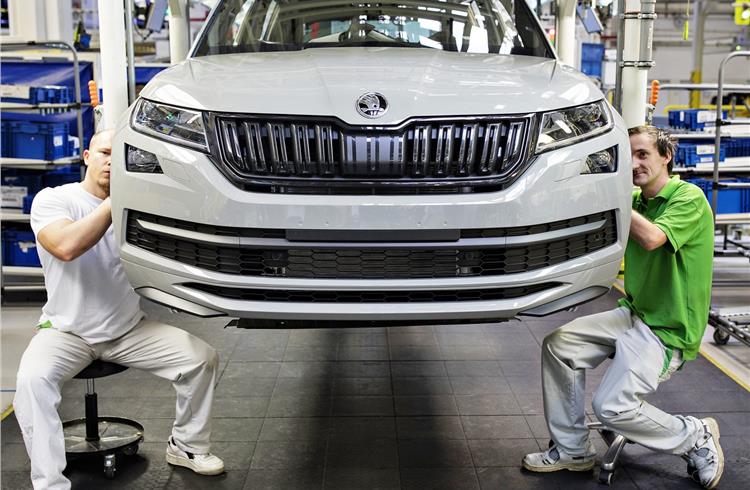 The carmaker’s first large SUV, which was revealed in end-2016, has only taken two years to reach a quarter of a million units. Today, the Kodiaq is one of the Czech brand’s bestselling models and is seeing sustained demand: in the first eight months of this year alone, over 100,000 vehicles were delivered to customers.

With a production volume of 250,000 vehicles within roughly 23 months, the Kodiaq is one of the Czech car manufacturer’s central drivers for growth worldwide. The Kodiaq celebrated its exhibition premiere at the Paris Motor Show in September 2016 and production of the bold SUV started in 2016 at the Czech plant in Kvasiny. ‘

The 250,000th Kodiaq, a SportLine in Meteor Grey, will be delivered to a customer in France. The SUV is currently manufactured at six car factories. In addition to the Czech plant in Kvasiny, the large SUV is also produced at sites in Changsha in China, Nizhny Novgorod in Russia, Aurangabad in India, Solomonovo in Ukraine and Ust-Kamenogorsk in Kazakhstan.

In addition to the Kodiaq, Skoda’s SUV portfolio currently includes the compact Karoq as well as the Kamiq, which is produced in China for the local market. Soon, the Kodiaq will get another variant in the form of the Kodiaq RS. The 240hp Kodiaq vRS will make its debut at the 2018 Paris Motor Show this October.