Vinnie Mehta: ‘We already have potential buyers from 200 cities of 31 countries at ACMA Automechanika.' 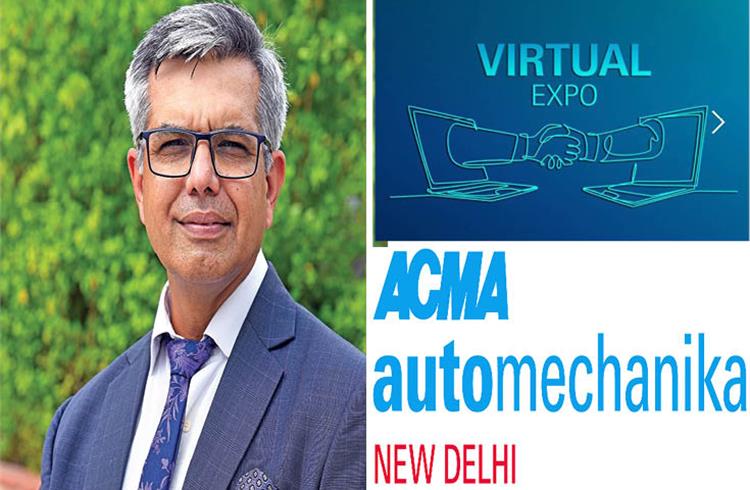 ACMA Automechanika, the leading aftermarket exhibition for the sub-continent, which is typically held at New Delhi’s Pragati Maidan every two years, will be held on April 22-23 with a difference — industry stakeholders will log in virtually to participate in this event.

Earlier this year, the trade fair organisers Messe Frankfurt India and the Automotive Component Manufacturers Association of India (ACMA) announced that the fifth edition has been moved to an all-virtual concept, given the latest developments of Covid-19 globally and its continued impact on restrictions imposed by regional governments.

What is the industry's response towards an alldigital event? Do you think it is viable to conduct such events virtually?
Keeping in mind the ongoing uncertainties, the aftermarket industry has taken it up really well by extending its support to the virtual trade fair. We have received a positive response since the announcement of the virtual show; around 50 companies have confirmed their participation so far. We are very optimistic for these numbers to grow from India and abroad as we move closer to the event. Our rationale behind the 'virtual exhibition' is that as an organisation, we must adapt to the new normal in an evolving economy. By offering a focused B2B digital marketplace for buyers and sellers, we continue to provide a professional and meaningful trade platform.

Could you give an idea about some of the leading exhibitors participating?

While Schaeffler India has confirmed to be the 'Principal Partner', other key exhibitors include Ajit Industries, Benara Udyog, Diesel World, Esteem Auto, Farad Italy and Super Circle among others.

Are seminars on electronics and smart manufacturing being conceptualised to run parallel to the show?

Seminars at the ACMA Automechanika New Delhi are always a big draw. Even this time around, we have planned four seminars during this twoday event. These webinars will focus on the outlook of the aftermarket for the next decade, how India can leverage the global aftermarket opportunity through exports, how to bridge the skill gap in the aftermarket as it evolves, and lastly, how digitisation can be leveraged to help evolve the aftermarket and enhance its value proposition to the customer.

Would we get to witness ACMA's Safer Drives campaign at the 2021 edition of the show?

Whilst we continue with our safety campaign throughout the year and across multiple forums, the aforementioned seminar on the outlook for aftermarket for the next decade will cover some of the aspects of this safety campaign.

How do you see the efforts of Messe Frankfurt and ACMA in organising this event in such trying times?

While a few B2B exhibitions in the traditional format have taken place in the country since January 2021, we were quite confident too that ACMA Automechanika New Delhi would also happen as planned. Unfortunately, the number of Covid cases has steadily been on a rise since the last week of February and therefore, in the wake of the worsening situation, we decided to move to a virtual forum as responsible organisers. Moreover, as the country braces itself for a second wave of the pandemic, many regional governments such as Maharashtra have started to implement new restrictions / partial lockdowns, which do not allow for face-to-face engagements such as exhibitions. We believe that our efforts will allow for meaningful trade interactions on the virtual platform; we already have potential buyers from 200 cities of 31 countries who have registered for the show. This augurs well for the bi-annaul event.

Could you take us through the process of outsourcing the technology and backend IT support for the event?

The platform being used is one of the leading digital platforms for virtual and hybrid events, and is powered by artificial intelligence (AI). In fact, it was recently awarded the best 'Virtual & Hybrid Event Engagement & Connectivity Platform 2020' at the Software and Technology Awards. The platform allows for interactions between all attendees based on information that is captured through our registration forms, and automatically mapped in the back-end system by the virtue of various predefined parameters. This is further refined through the online behaviour of the attendee when browsing the platform.

Do you see a future where such large-scale events would ideally be preferred in a hybrid 'phygital' format?

Whilst physical events have their own charm, one has to continuously add value to the offerings to retain customers. In that sense, I believe hybrid solutions can facilitate greater value addition to both exhibitors as well as business victors. A hybrid format helps establishing contacts, increasing reach and network throughout the year, and also increasing the efficiency of investments.

If we were to just consider our partner Messe Frankfurt, which is a global leader in this space, the company has been investing in digitisation of its events for over two decades. Customers are offered versatile packages of digital formats, which have now been strengthened by the digitisation push across the industry.

This virtual aspect will continue to be an integral part of their physical events even after the pandemic, to offer valuable enrichments to the exhibitors as well as visitors.

This interview was first published in Autocar Professional's April 15 issue.