Roland Folger: ‘Driving an EV today for 100km is more polluting than any BS IV vehicle.’ Absolutely correct. What we have seen in India over the past 10 years are a series of these events.  I keep telling my people, “Listen, if we have a growth concept and strategy for the country, in real life it means that we have to produce ever-best quarters. So that is a normal thing to have actually. It is a normal view that we need to get used to. We still strongly believe in the continuous growth of the Indian marketplace because the potential is certainly there.  We have to be better, faster and smarter than some of our competitors in order to stay ahead of the game.

What are the key pillars for these record sales and, going forward, is this sustainable?

This high level of growth was a little bit anticipated, because we knew it would come from a lot of disruptive environment seen recently, with the introduction of GST, with some of the leftover concerns that everybody had from the demonetisation. But when we actually look at how this year played out, the third quarter was predominantly influenced by people expecting the prices to go up again, with the introduction of GST and the additional 25 percent cess that was levied on the luxury industry.

I think everybody saw that coming; the announcement was made and people actually came to our showrooms, literally standing outside our showroom doors, asking
to be let in to get their vehicles before the new prices kicked in!

How did the market react after prices were revised? Was it in sync with your expectations?

It is basically back to normal. The big benefit due to the announcement that was made at the end of May 2017 that the taxation on luxury cars would effectively come down was seen as a highly positive decision by the government initially. We had very high hopes that it would boost our volumes, at least up to a certain extent, but what we have seen in the third quarter was the result of this reduced basic taxation and lesser cess.

Now, with the new cess 15 to 25 percent up again, we are basically at the level of pre-GST pricing levels. So, nothing much has changed for the better. Basically, everyone is back to square one and it is like a missed opportunity again.

You have always said there should be rationalisation of taxes in India and because of its absence, the country is losing out on growth opportunities in the luxury segment. Do you say that for the macro level as well?

Of course. If we compare ourselves with other countries, one of the reasons we never seem to develop our luxury segment appropriately is naturally directly related to the taxation system in India. And that is okay because the government wants to make a certain amount of taxes or whatever reasons that are not completely shared with us.

But it is very simple from our perspective that if you want to optimise the taxes, for instance, to forego a cess completely would enable the luxury industry to hypothetically double its volumes. Now, this would massively be able to over-compensate individual car losses. This is what we, hopefully, in the mid-term, can use as an argument with the taxation people to make them see if you want to increase your tax income, that this is certainly something they can consider.

It is not only the taxation angle for us, it is also important for job creation which is an issue. The volume rise would lead to significant growth, even doubling of the number of people in our plant. It’s really sometimes sad to see that these opportunities are not properly picked up and put into motion.

Ever since you came into India, you have been greeted with three key announcements, two of which (demonetisation and GST) were by the government and one by the honourable Supreme Court (BS IV).
Have you seen the intended results or is it too early?

I think we have been as you said ‘very vocal’ because we are concerned citizens. We are concerned citizens in a way because we would like to understand where all this is leading to. Because we believe strongly that these decisions are necessary to move India to the next level, whether it was demonetisation or the introduction of GST. We believe short-term pains are worth the mid- to long-term gains. We are yet to see its impact in a mid-term (2-3 years). There might be and there will be mid-term gains. But we have not seen anything anywhere in our business yet. 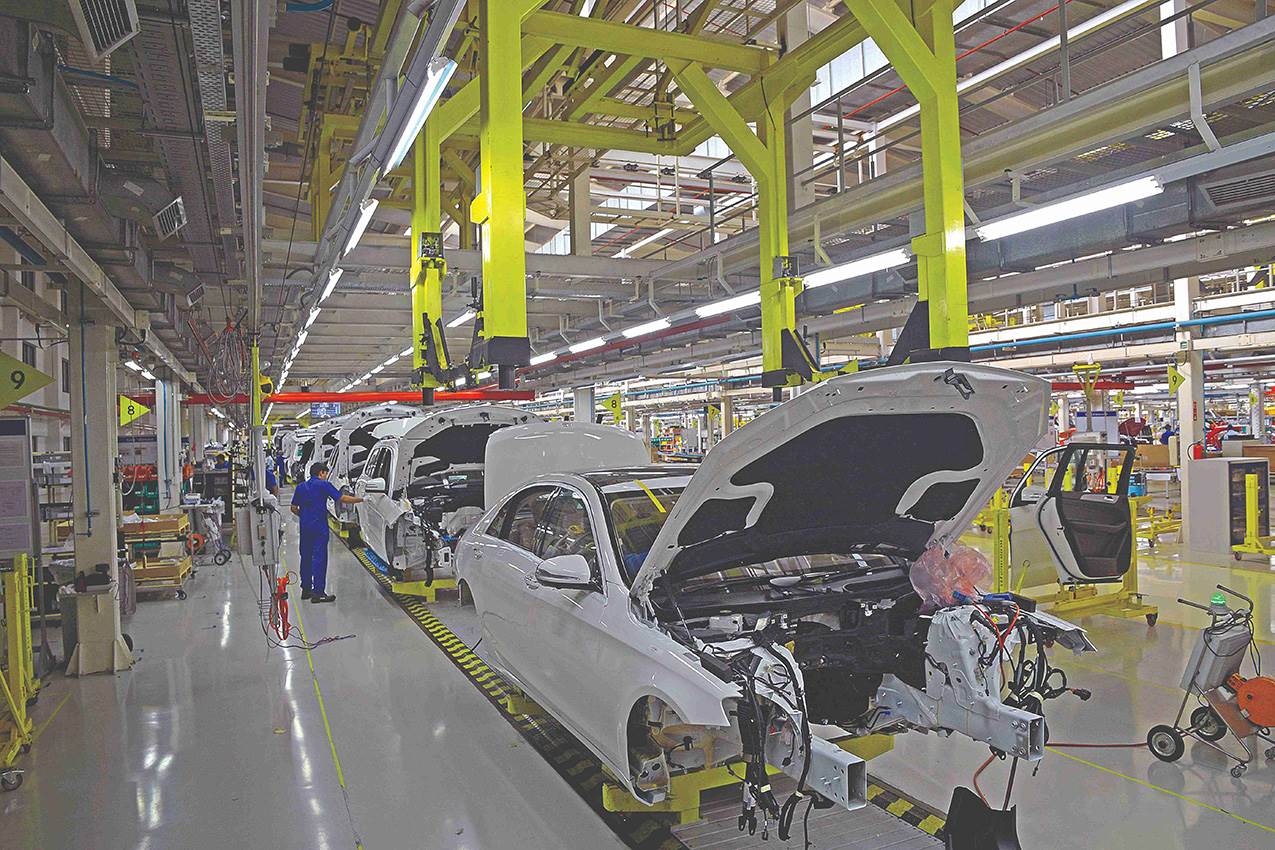 At 20,000 units per annum at its Chakan plant, Mercedes-Benz has the largest installed production capacity for any luxury carmaker in India. The localisation level achieved is 60 percent.

The other key topic the government is very strongly talking about and has made its intent clear is electric mobility. Mercedes-Benz as yet doesn’t seem to be convinced by that. How long will it be before you look at the viability factor before entering the electric
mobility space?

We (Daimler AG) have recently announced massive investments in electric vehicles. We strongly believe in EVs but there are some concerns from our side that we need to discuss and understand first.

First of all, when we talk about the ramp up for instance towards a very demanding target of 100 percent, naturally that ramp up has to happen on the basis of investments in infrastructure. It is completely unclear, at the moment, where will the infrastructure come from, who is going to pay for it, who is going to make the investment, is it expected from us and will the government do its own bit of that? And, with a size of India, you can imagine that we are talking about extremely high numbers that would affect anybody negatively, whether it is
the government or individual companies that need to pay out in a much more longer term.

However, the biggest concern from our perspective is – and of which a lot of people are not aware of – is that when you produce electric energy today, in Europe, but it is more so in India, that the way electricity is produced is rather polluting.

At the moment, our own internal calculation says that it is more polluting if we use an EV today for driving 100km than any BS IV vehicle, even a diesel-powered one. So if you compare these pollution levels, I still fail to see how beyond a localised effect, getting, for instance, the pollution out of a city like Delhi or Mumbai, you would transfer it somewhere else in the country. And I don’t think this is the full plan that the government intends. So, as of now, we are waiting for further deliberations and discussion along those lines, because I believe there is a lot of explaining and a lot of fixing of goalposts to do. In 2018, Mercedes-Benz India will focus on enhancing the qualitative aspect of its network. The German carmaker has the largest presence among all luxury car brands in India with
92 outlets in 45 cities.

You have launched a dozen products this year in India. Speaking of volumes, how much do you expect of that 19 percent growth to continue for the rest of the year?

We would certainly wish that this would continue but at the moment it is still too early to see. Everything is running as per our expectations and actually also to the initial expectations that we had planned for the whole year. Because now, once the impact of GST has been levelled to a certain degree, we are positively and carefully optimistic that we will achieve our targets and we will get to our goalposts this year.

Is 40,000 vehicles an achievable target for the overall luxury vehicle segment in India?

Well, you might know more about it than we do, because we basically have only our own figures and I have not seen anything from the rest of the luxury automobile industry.

We believe it is feasible and you see a lot of new entrants coming into this segment as well. Obviously, something positive is developing and the segment could grow. But, at the moment, we still see that the internal competition does not automatically translate to increase in the volume per se in the luxury segment.

Beyond launching new cars, what is the strategy for Mercedes-Benz India in 2018? Would you, for instance, look at increasing levels of localisation or maybe a new concept in the retail space?

I think the most noticeable thing will be on the investments that we do together with our dealers, in line with our overall volume growth. We will definitely keep on investing into the Indian marketplace with the sheer interest to move closer to customers.

What we have seen in the past is that customers are sometimes exposed to relatively long driving distances of 200-300 kilometres. So by moving out into the Tier 3 and Tier 4 cities and ever getting closer to customers, especially for the concept of aftersales, we believe we have one of the best solutions in the luxury segment in place. That we will continue along those lines as far as investments go. In addition to those, we will also continue bringing new products or updated products to the Indian marketplace.

We have made commitments to start bringing BS VI  vehicles. That's also part of our overall long-term strategy. Yes, exciting times are ahead of us.

So can we expect the first BS-VI Mercedes-Benz car in 2018?

We have promised that and we will try to do this. It depends naturally on the availability of the fuels sometimes. We have some other ideas that we try to apply to the Indian marketplace because we believe, as far as the environmental impact is concerned, that is the best solution you can have at the moment. And the earlier that we can bring the technology that we are already using in Europe to India, I think the better for the country as a whole.