Jaguar's director of design Ian Callum and his Land Rover counterpart Gerry McGovern discuss the importance of design and laud Tata Motors for its unstinting support. 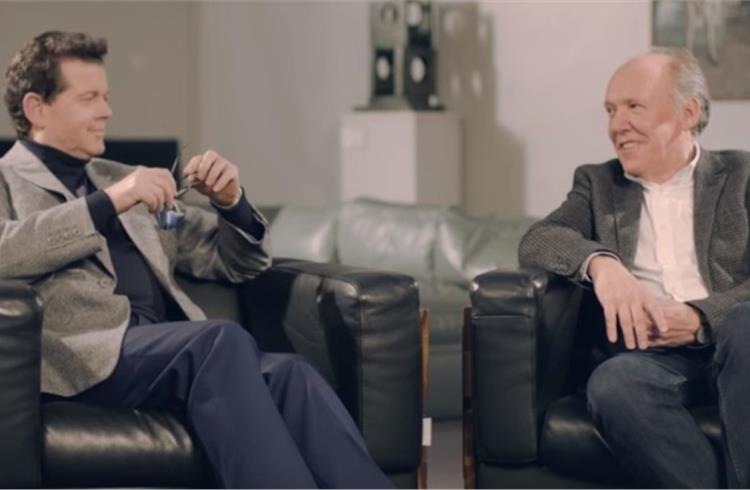 Shot at the Royal College of Art (RCA), where they both studied, the film shows the two stalwarts of the British automotive design share their passion and talk about the importance and nuances of the British way of design, explaining how this philosophy influences the shape and form of every Jaguar and Land Rover.

"I don't think you deliberately sit there and try and design Britishness. I think it comes intuitively. The Royal College of Art is a platform for creativity, but you learn so much more when you come out that you have to become a multitude of different disciplines in order to get your designs through," says McGovern in a segment.

Opening up about his role at Jaguar, Callum says: "I wish drawing cars all day was our job but, collectively, it is understanding the car and creating the atmosphere of the car… The hardest part is not coming up with the idea, but protecting it right through a whole process where hundreds of forces come at you from different directions, be it financial, legal, functional or manufacturing."

In another segment McGovern says: “I think what has made massive difference to our business is being associated with Tata, not just because they love design but because they recognise the importance of it,” while highlighting the support from the Indian parent company which bought JLR from Ford in 2008.

In one of the most intriguing parts of the interview, Callum and McGovern debate Jaguar's entry into the SUV market with the launch of the all-new F-Pace.

Additionally, McGovern also talks about the new Land Rover Defender and foresees the launch of the SUV as a ‘pivotal event’ in Land Rover’s history.

In a more humorous moment, both designers select their favourite Jaguar and Land Rover models.

The theme of Great British Design will be showcased at next week's Geneva Motor Show, as Jaguar debuts the F-Type SVR and the updated XF, whilst Land Rover displays the Evoque Convertible as well as the luxurious Range Rover SVAutobiography. Stay tuned for Geneva Motor Show updates from Autocar Professional.