Bajaj Auto's Rakesh Sharma: 'At least a third of our growth should come from new markets.'

An insight into Bajaj Auto’s strategy to expand globally and the initial market response post lockdown. 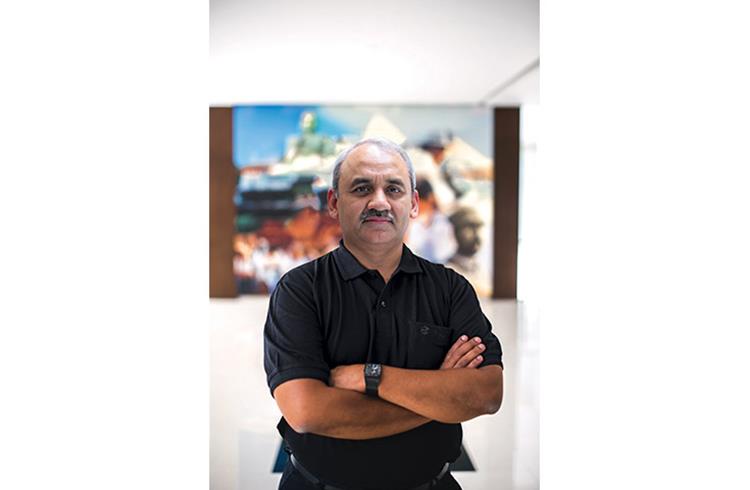 Rakesh Sharma, Executive Director, Bajaj Auto and President, IMMA talks about Bajaj Auto’s strategy to expand globally, initial market response post lockdown, the EV business experience and shift in the axis of the global motorcycle industry in an interview with Sumantra B Barooah.

How has the market response been ever since Bajaj Auto’s dealerships started opening with the lockdown relaxations? How long could it take for the market to return to the pre-Covid  level, or maybe the FY2019 level?
In terms of demand after a couple of months of no sale, we have seen that towards the end of May and the beginning and the first 10 days of June, the return to normalcy is happening at a faster pace than what we anticipated when we were in the middle of the crisis. We are almost going to be at 90 percent of the level that was there during the first 10 days of June 2019. We did not anticipate that and that's a very good sign that people are coming back and picking up from where they had left off. So, I'm hoping that we will see a return to normalcy faster than expected.
Right now we've lost two months of sale, but who is to say that two months of sale can’t come back and get recovered in the balance 10 months? That likelihood is there but a lot depends on whether society will be comfortable living with this pandemic or not. We also need to understand this point that it is not that the industry was in a very good shape before Covid-19.
The economic scenario, the burden of the regulation (BS VI, ABS, insurance) on the industry, and the additional costs were weighing heavy. Even before Covid, we were all preparing for a very tough financial year 2021. If there are stimulus packages, they will hopefully also address not just the Covid-related issues, but some of the general economic issues facing the consumer and the industry.

Is it driven by Covid-19 also as more people may prefer personal mobility and not many may want to use public transport or be able to afford a car?
At this stage, the driving forces behind the return to normalcy are really the suppressed demand of a couple of months. Secondly, people wanting to come back and pick up where they left off from. Yes, there are some anecdotal signals we are receiving that two-wheelers do represent a very relatively safer mode of transport and people are re-evaluating the option of the two-wheeler from that perspective now. We don't have sufficient evidence and clear evidence that it is become a sizeable force.

Around 45 percent of Bajaj Auto’s motorcycle production was exported last year. How do you see it progressing over the next few years?
We decided quite some time ago that our playing field, geographically speaking, will be the world. We have narrowed our product focus to 100cc to 500cc motorcycles. We are probably the only auto player which exports 40/45 percent of its production and does it in a reasonably profitable manner. Our strategy is to continue to do that. The more time we spend in these markets, the more we are understanding the customer and what it takes to win in these markets. So, that knowledge is also becoming institutionalised in the company. The change is that when conceptualising a product, we think about it for the whole world rather than just think about it as first India and then the world as an addendum. Secondly, this whole approach gives us the scale to manage quality and costs better.
Thirdly, being substantively present in these 70 countries allows us to handle the market fluctuations better. So we are very convinced about this strategy and we are going to keep driving it.

Our growth in international businesses will be primarily, in the next two to three years, driven by deepening our market shares in most of the places we are present in, and also by entering into some important markets. We are not really present in ASEAN, which is a big market outside of the Philippines, and a little bit in Malaysia. It's got a reasonable market size, but it's also got better products with better margins. It's not a very easy territory to enter.

The Japanese brands have been holding sway for a long time. The ASEAN customer has a tremendous respect for Japanese brands and it's not just for automotive. ASEAN is a very important area for us to develop. We started with the Philippines, which I would say, is a little bit off mainstream in terms of its taste in terms of its structure of the motorcycle segment. We are doing extremely well there along with our distribution partner Kawasaki. We are the number one player over there.

Subsequently, we are definitely looking at Brazil, which again is an important market. If you're a global player, you have to explore all global opportunities. After that, we will look at some of the lighter end of motorcycle segments in West Europe. So those are the sort of new geographies which will drive growth. Most of our growth, hopefully, should come from market share enhancement, but if I take a three- to five-year period, then at least a third or so of our growth should come from entering into new markets.

How does the overall motorcycle industry look like this year, especially key markets? Will the midsize motorcycle trend turn into a megatrend?
The emerging markets, and that’s where we have a significant presence too, let's say, Latin America, Africa, South Asia, Middle East and ASEAN constitute at least volume-wise a very, large portion of the global motorcycle market.
In 2019, apart from Africa and some places like Bangladesh and the Philippines, it has been a difficult year for the motorcycle industry. The reason is really the economic environment, which faced a lot of headwinds. 2019 growth was less than what we expected. In that backdrop comes Covid-19, which impacted almost every country.

I think we are seeing the end of the most difficult part of Covid, though not the end of the pandemic. Large parts of the world have now accepted this as a new reality and are designing their own protocols to live with it, as a result of which the wheel of businesses have started to move again. If there is no major second surge (of the virus outbreak), we can expect normalcy to return faster than what we were expecting when we were in the deepest part of the crisis.

When it comes to the midsize (250cc to 500/650cc) motorcycle category, certainly things are pointing towards an expansion of this segment, particularly in the developing countries. If you step back and see what's happening, it is that the demographics in the world are such that the category of customers who are the potential customers is actually growing in the emerging markets, whether it's ASEAN, Southeast Asia, including India, Africa, and parts of Latin America. The centre of gravity for the segment, the axis, also for the overall motorcycle industry is definitely shifting.

How’s the initial market experience with the electric Chetak? Has its production restarted?
The response was fantastic. Customers so far have bought it for two key reasons — the Chetak’s brand equity, and aesthetics. Those buying it because it’s an EV are in the minority. We are yet to see the movement from early adopters to the next level.

Chetak’s production got disrupted as something actually was sourced from Wuhan, precisely when it was receiving a really good response. It’s been resolved and production is just about starting again.