'We are set to be the world’s largest tensioner manufacturer in FY2018.' 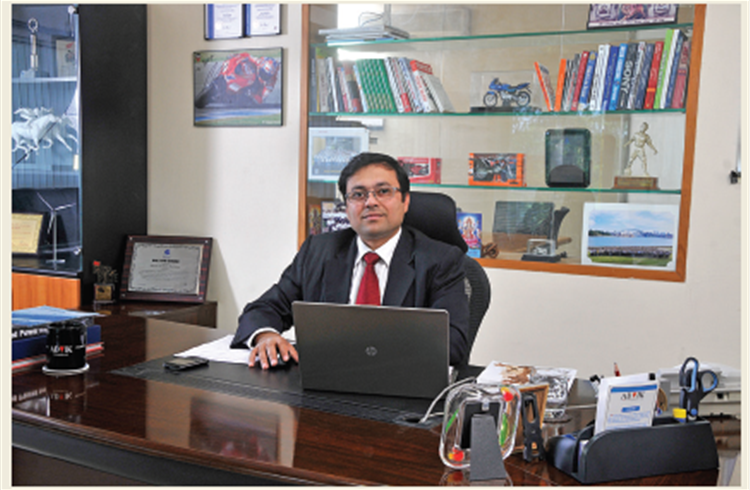 Advik Hi-Tech, a Pune-based Tier 1 supplier to two-wheeler manufacturers globally, is gunning for a turnover of Rs 500 crore in FY2018 on the back of scaled-up demand for its products and aggressive capacity expansion overseas and in India. The company is also working to tap new product opportunities under BS IV norms and the incoming safety norms. Aditya Bhartia, managing director, Advik Hi-Tech, speaks to Amit Panday.

During the April to November 8 period, we grew by 21 percent YoY as against our original projections of 18 percent in our topline. In the 8 November 2016 to 31 March 2017 period, we de-grew YoY. All in all, we closed the year at 12 percent YoY growth, which was still healthier as compared to the industry growth.

Demonetisation impacted the OEMs and our business is directly related to their requirements. The sales were dismal in the second, third and fourth week in November 2016. The last 3-4 months of FY2017 were a challenge. We closed the last fiscal with a turnover of Rs 375 crore at the group level.

What was the split in terms of domestic and export business?
On the group level, roughly 11 percent were exports which mainly comprised oil pumps last year. We started off export of tensioners in November-December (2016).

Exports were very good for us. There are two reasons for this: we had set up a plant in Indonesia two years ago. That plant has done exceptionally well for us, better than that what we had planned earlier. Now, as we speak, we are in the process of expanding that plant because we have run out of capacity.

So we have now bought more space and we are building another plant, which will be three times the size of the existing one. The built-up facility will spread across an area of 40,000 square feet. It will begin operations in January 2018.

The upcoming plant will be built close to the existing one. Once the new plant comes up, we will shift the operations of the first facility into the new one. In Indonesia, we now have the market share of 50 percent in oil pumps (two-wheelers).

Do you supply to Honda and other Japanese two-wheeler OEMs in Indonesia?
We supply oil pumps to Honda, Yamaha, Suzuki and Kawasaki. We used to earlier export to Honda in Indonesia and we had a 25 percent market share with them. This was when we were exporting to them from India. Then we went there and set up our own facility. Our business grew with them and now we are close to having a share of 50 percent business within Honda in Indonesia. We added other customers there in a span of two years.

Secondly, we began making water pumps in Indonesia. It was a new product vertical for us. Now we have orders for 1.5 million units of water pumps per year from there split between Yamaha and Honda.

Thirdly, we got orders for making tensioners from Honda. Now we have a share of about 30 percent in the supply of tensioners within Honda in Indonesia. This will make us the world’s largest tensioner manufacturer in FY2017-18.

We were the world’s largest oil pump maker for the two-wheeler business. We supply about 14 million oil pumps in a market, which is 60 million in size globally. Now we will make 14 million tensioners wherein the world market, I estimate, is only 40 million units. For the January to April period in CY2017, we are already the largest manufacturer in terms of run-at-rate.

How does FY2018 look for business?
We are aiming for Rs 500 crore, which would be budgeted. This year our exports would be close to 20 percent.

Did the switch from BS III to BS IV emission norms impact Advik Hi-Tech’s business?
The switch to BS IV norms had a very positive impact on us. None of our current mass production products get affected at all. However, there were two other new product verticals that we were readying over the last two years. These are secondary air valve and purge valve. These are required in the BS IV-compliant two-wheelers and not in the BS III-compliant vehicles. We have tested and validated these two new products and now they will go into production. These two new products for BS IV-compliant two-wheelers should fetch us revenues worth Rs 30 crore out of the anticipated growth of about Rs 125 crore in FY2018.

Will you continue to expand production capacity besides the new plant in Indonesia? What investments are earmarked for capacity expansion in FY2018?
We have already set up a new plant in Gujarat for Honda (Two-Wheelers) from where we are supplying parts (oil pumps, tensioners and combi-brakes) to them. We have bought land there and we are expanding our capacity. A new facility is coming up soon. As of last year, our cumulative supply of combi-brakes (CBS) to Honda has crossed one crore units. (Advik Hi-Tech has a 95 percent share in the supplies of combi-brakes for the Activa and Dio scooter models for Honda in India.)

We are also setting up a new plant in Vietnam, which should be ready by April 2018. We plan to supply to Honda and Yamaha from that plant.

We have earmarked about Rs 55 crore for capacity expansion in FY2018. Last year we had spent about Rs 40 crore on the same.

Will the new plants in Indonesia and Vietnam impact exports from India?
We follow a hub-and-spoke model. We manufacture products at our local plants and then assemble them on the assembly lines in Indonesia. Those plants are going to be pure assembly lines. Our three hubs in India are Pune, Bangalore and Uttarakhand. Our spokes are Gujarat, Manesar, Indonesia, and Vietnam will also be a spoke. We will have eight plants in all including hubs and spokes going forward.

Our exports from India include supply to Ducati to Thailand (single-source supplier of oil pumps to Ducati’s Thailand plant). We continue to do business with Yamaha in Europe.

From the perspective of incoming BS VI emission norms, will the current product lines continue to be the same or will they need new upgrades and new products?
Let me break it down, vertical-by-vertical, to answer your question. There will be no change in the oil pumps for two-wheelers. From BS IV to BS VI, they will continue to remain the same. Tensioners won’t change either. Same for drum gear shifters. Combi-brake systems (CBS), rather with the new mandatory safety norms, will see a sharp surge in demand. This will be a big boost for us.

We current make about 3.5 million units of CBS per year. I think we are the largest mechanical drum-based combi-brake maker in India, and we have the right economies of scale with us.

So under the upcoming safety norms for two-wheelers, all models under 125cc are target business for us. On the BS VI front, we are working on new products that are confidential.

Do you plan to venture into making ABS systems for two-wheelers above 125cc in the near future? Besides one homegrown supplier, there is no other prominent Indian supplier that is looking at that business opportunity.

The ABS system is an assembly of parts including disc brakes, hydraulics and electronics. The larger part of the two-wheeler market in India is still below the 125cc engine displacement. While over the last eight years this has not changed much, I think there won’t be substantial changes in the coming years too.

I am saying so because electric vehicles are a question of when and not if. As I look forward, say 10-15 years from now, I see more of electric vehicles at least in the urban markets. Rural will continue to be a separate story. We anyway do not sell premium two-wheelers in rural pockets barring Royal Enfield’s Bullets for varied reasons.

So the urban pockets, which are the primary market for 150cc-200cc two-wheelers, I think, will move to the electric vehicles.

I think it’s too far-fetched for us in terms of core competencies to try and make an ABS system today. For us the immediate priority is to cater to the incoming demand for CBS. There will be a huge upsurge in the demand for CBS for scooters. For motorcycles, the mechanism will be much simpler, and we do not see a business case there.

This is just one part of it. As a company, we are always pursuing innovation ahead of others. We started making CBS much before the norms came. We will be happy to look at other technology-based opportunities.

What are your immediate priorities, going forward?
My priority is to quickly scale up the production of the new BS IV parts. The current demand from our customers for these products is much more than our existing production capacity. Our capacity to make secondary air valve and purge valve is roughly 1.5 million units per year, which is falling short.

Our new Indonesia plant is coming up, so we need to ensure that we start supplying the planned volumes from there. Getting the new facility in Vietnam is important.