‘The Pune facility is a major R&D centre in TomTom’s global network.’

Alain De Taeye, a member of the Management Board of TomTom, speaks on the key role played by its largest global development centre in Pune, R&D-oriented projects and its handling of big data. 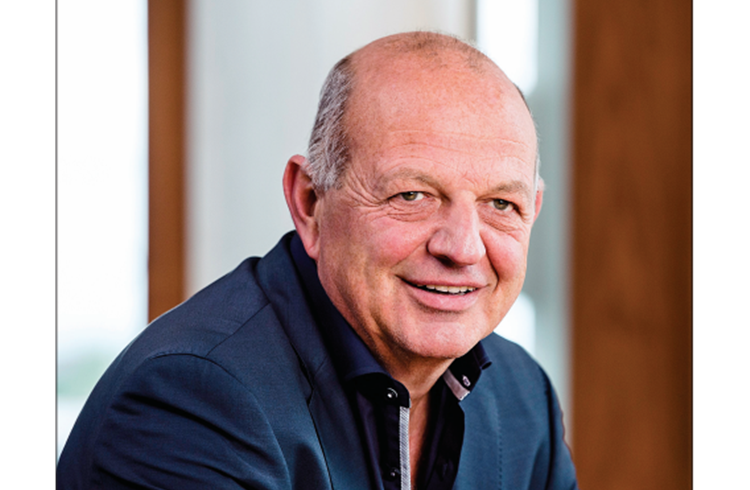 Alain De Taeye is a member of the Management Board of TomTom, the Dutch company that produces traffic, navigation and mapping products. In an exclusive interview with Amit Panday, he speaks on its R&D-oriented projects, involvement in the development of futuristic technologies including autonomous and connected cars, how it handles big GPS data and yet delivers comprehensive, accurate map-based location services, and the key role played by its largest global development centre located in Pune.

What is the strategy behind setting up the traffic centre at TomTom’s Pune-based R&D centre?
The goal behind setting up this traffic centre is to showcase the expertise we have from the traffic and mapping technology point of view. We have three such traffic showcase centres globally – one in Berlin and another in Amsterdam, which is also TomTom’s headquarters; we chose Pune for the third one. 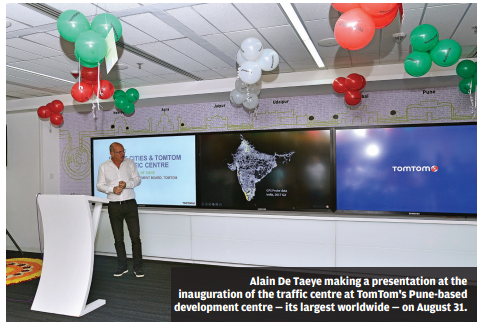 That kind of traffic information gives you an excellent and up-to-date view of how the traffic situation is in your city. This is essential for any smart city. As the Indian prime minister has announced sizeable investment programs for smart cities, we can show the real-time traffic updates which is essential for any smart city if they want to manage the mobility of their citizens in a better way. This is one of the main reasons.

Simultaneously, we want to showcase how accurate our traffic information is. This is so because it is based on a huge amount of data. This is real big data. To give you an idea, we get data through GPS traces coming from smartphones, navigation devices, fleet management systems, and through other sources. We have passed half-a-billion devices from which we get that kind of information. Very soon, we will have around 700 million devices delivering us that kind of information. To give you an impression on that, on a daily basis, we collect 2.1 billion kilometres of GPS traces – this is about 27,500 times around the world!

If you look at the GPS traces that we have of India, it is a massive amount spread across the entire country. What is more important is to understand what you can do with that information. The traffic information in navigation apps in smartphones is a well-known application of this technology.

However, if you want to manage mobility and traffic, which is one of the top priorities for any smart city initiative (worldwide), then, in my view, you absolutely need that kind of information for a couple of reasons. You want to inform your citizens about the traffic congestion updates distributed via mobile phones or disseminate the same via variable electronic traffic signs or other ways. The essence is that if the citizens are better informed about the city then that would help minimise congestion. Secondly, you can use the information to manage or control a city’s traffic flows.

Traffic congestion is one of the major problems for big cities all around the world. We have the information (live traffic updates) for about 100 Indian cities, which we visualise would be important cities in the future too.

Considering so much data is being recorded through GPS traces across several cities around the world, how does TomTom handle such big data? And how does it work to make such big data meaningful for common people?
I’ll answer your question in a couple of easy steps. Firstly, we take all that data and match it with the map. As you know, we make digital maps for the world. So we take the GPS traces and we match them to the (respective) streets. As soon as you do that for all those traces, and we continue to do that every second, then you can actually know on all of these stretches of roads how fast people are driving. 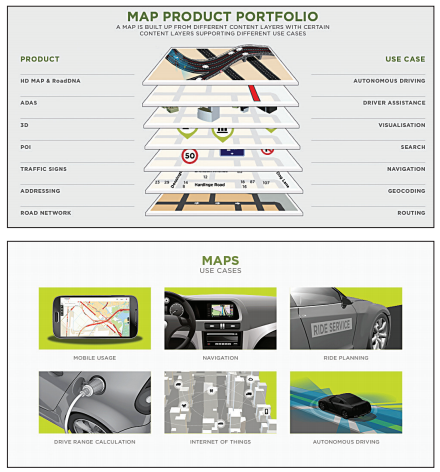 The second thing that we do is that we know from our historical data what the normal speeds are on those roads. So, if there is no congestion, what speeds do people drive at. We know what the actual speeds are and what the free flow speeds are; using this data, we can derive the congestion. What we can also derive is the delay one would have to suffer when compared to the normal circumstances.

Then, we take all the information that we can get either from the local authorities, municipalities or other sources about incidents, which can be anything including an accident, road blockage and others. When an accident happens on a route, vehicle speeds suddenly start to go down and eventually stop. So you get to know that something has happened. Then you need to figure out what has happened.

For other incidents like work (road construction), which is generalistic data, we combine with other data. Then not only do we have the feasibility of what the average speed is on a route but we can also say where the congestion is, and also how long the traffic jam is. You can find all these details on TomTom’s live traffic webpage for (listed) cities. It is fascinating and, as you can imagine, this is a very useful from a smart city point of view.

As you say, real-time traffic information is critical for smart city projects around the world. Globally, several automakers are working on autonomous cars using cloud-based systems and autonomous driving technologies. How is TomTom looking to use its vast data to bank upon these two big opportunities?
This is a good question and an easy one to answer. Autonomous driving is one of our big R&D areas. We are leading in terms of the coverage for what is called as the high-definition map, which is specially created for the autonomous vehicles.

Next to our own technology, earlier this year (in January 2017) we had acquired Autonomos (a Berlin-based autonomous driving start-up acquired with the intention of strengthening TomTom’s position in autonomous driving technologies), a company that makes the software solutions for self-driving cars. Actually, we do have a self-driving car. It's not that we are aiming to produce our own self-driving cars but we want to have the full stack of software that we can validate in a much better way what it takes in terms of data and so on and so forth.

We have first-hand experience as we actually have been driving around Berlin (under normal traffic conditions) and you do not need a driver behind the wheel. It’s pretty advanced. So, we do see that as a bigger opportunity.

Some people say that self-driving cars won’t happen in India because here the traffic is so complicated. I disagree with that. Self-driving cars will happen everywhere and it is just a matter of time. I think it does not depend on the complexity of traffic but more on the legislations.

To answer your second question on cloud-based systems, anything we do whether it is map-making or updating traffic is already on the cloud. In terms of big partnerships, we had announced a big cooperation with Microsoft as it has the Azure Cloud and we are the locationenabling partner of that cloud. 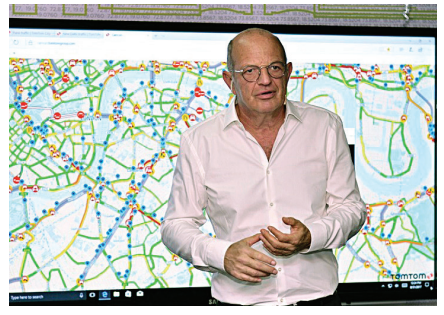 India is a big market for fleet operators wherein we have a large fleet of commercial vehicles plying across the country. We also have a large fleet of passenger cars operating as cabs under Uber / Ola and similar service providers. Do you see an opportunity around connected vehicle technologies in India?
Yes, there is definitely an opportunity. TomTom is the leading fleet management solutions company in Europe. So we do have the expertise to set it up for the customers here.

How important is the Pune-based engineering centre for TomTom in its global scheme of things?
The Pune-based centre is the largest for us outside of our headquarters in Amsterdam. However, if you look at it in terms of a development centre, this is the largest one we have globally.

Our headquarters have slightly more people but not as many developers. So this centre, I can say loud and clear, is absolutely strategic to us. It is very important for us specially because 75 percent, if not more, of the force working here works for what we call location technologies.

Location technologies is the full range from navigation software, traffic services, map-making and cloud-based solutions. We have grown this centre over the past few years substantially. This year (CY2017), we have already hired 200 people and this centre will continue to grow. We are on a constant lookout for more software professionals.

This clearly means that the Pune-based development centre provides support to TomTom’s global projects.
Yes, absolutely. That’s primarily the function. Sometimes, there is a misunderstanding that our Pune-based centre works only for the India market. Actually it’s hard to put a percentage to this but a vast majority of what is happening here is for the TomTom worldwide. It is a major R&D centre in TomTom’s worldwide’s network – the biggest one. TomTom’s second largest development centre is in Poland, which has about 700 people.

Do the software engineers working for TomTom in India contribute towards ongoing autonomous driving project(s)?
Yes, they are contributing in terms of mapping technology.

Has TomTom partnered with automakers globally in terms of providing real-time traffic data?
Yes. If you look at the European market, I think we have around 80-85 percent market share there.

Can you apprise us about the OEM partnerships in the India in a similar context?
I won’t be able to share details with you on that front. I hope to be able to share the same with you rather soon. At this stage, we are working on deals and they are under non-disclosure. So, unfortunately, I won’t be able to disclose details as of now. But as soon as we can, we absolutely will because India is a big opportunity for us.

Do you have any 2020 roadmap for your Pune-based development centre?
I won’t be able to give you a 2020 roadmap because things are happening faster than even what I can predict. However, I can tell you that this centre will grow in the future.

(This interview was first published in the November 1, 2017 print edition of Autocar Professional)