‘‘Besides ‘Make in India’, you also require ‘Quality in India’ and ‘Cost in India’.’’

Japan’s smallest carmaker grew to become India’s largest thanks to the vision and determination of one man. Osamu Suzuki, chairman of Suzuki Motor Corp talks about Maruti’s early days, the Gandhi family and his success with small cars. 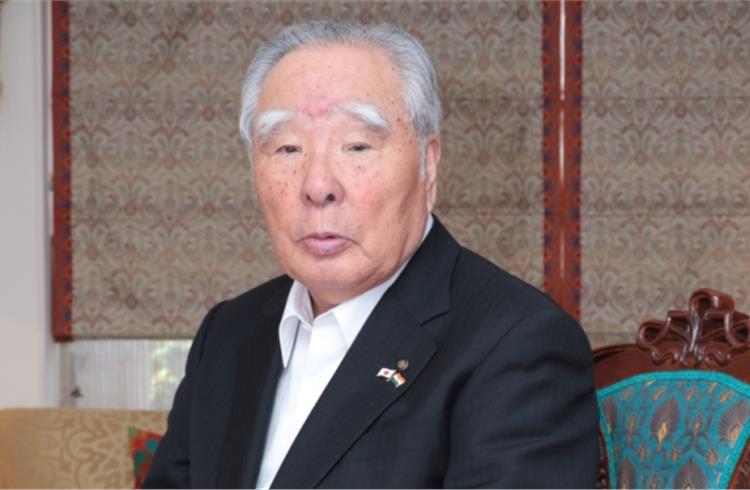 Japan’s smallest carmaker grew to become India’s largest thanks to the vision and determination of one man. Hormazd Sorabjee speaks with Osamu Suzuki, chairman of Suzuki Motor Corporation, about Maruti’s early days, the Gandhi family and his success with small cars.

Not many people know that Suzuki’s association with India and the Gandhis began more than a decade before Maruti. Do tell us about that fateful rally through India in 1969.

I was not there for the 1969 Asia Highway Rally personally but my team was part of this mission to drive all the way from India to Kuwait to promote and prove the endurance of the Suzuki Fronte SS. This was a mini-car powered by a 30bhp, 360cc air-cooled engine and with a top speed of 110kph.

The Suzuki team was staying at the Ashoka Hotel where they were approached by a rather polished gentleman who requested them to come to the house of his boss, whose sons were very interested in the car.

When the Suzuki team arrived at the residence of the boss, it turned out to be the official residence of Her Excellency, Indira Gandhi, who was then the prime minister of India. The Suzuki team was welcomed by Rajiv Gandhi and Sanjay Gandhi. At that time, Sanjay Gandhi had just come back from the UK and was planning to start a ‘People’s Car’ project in India. Rajiv Gandhi had a keen interest in cars as well, and so they both got behind the wheel and took the Fronte SS for a test drive on the streets of New Delhi and came back impressed with the car. Before the Suzuki team left, both the Gandhi brothers expressed their solid intention to enter into technical collaboration with Suzuki and asked them to immediately convey the same to the Suzuki headquarters in Japan.

Unfortunately, the situation surrounding Suzuki did not allow them to accept the offer at that time. 1970-1975 were difficult years and we were busy trying to save the company. However, it seems a partnership was destined to happen and the creation of a marvelous bond between India and Suzuki.

So when did you begin to think of going to overseas markets?

In 1978, I became president of the company and in those days, we developed a new small car, the Alto with a larger engine — 550cc to 650cc — which we began selling in 1979. In fact, this was the same vehicle we brought to India in the form of the Maruti 800.

The Alto was very popular in the domestic market and we grew by leaps and bounds with this particular model. We felt strong enough to now focus on overseas markets and in 1981, we tied up with GM, which had approached us to make small cars for them.

When GM asked us to manufacture a small car for them, it lifted the image of Suzuki Motor Corporation (SMC) in the eyes of the world. So when Indian officials visited Japan and heard that GM had asked Suzuki to manufacture small cars for them, they were convinced that if a company like GM is collaborating with SMC, the company must be good.

Now, how Suzuki heard of Maruti gets divided into two stories. The first is that one of our engineers was on his way to Pakistan where we established one plant in 1975. He had taken an Air India flight in which he read in a newspaper that the government was asking manufacturers to come and make a small car for India, which would be the people’s car. The second story is that the Indian government is said to have sent an airmail to SMC and this mail went to different departments of SMC and disappeared. Now out of the two stories, I think the former one is true!

How did you follow up with the Indian government?

How was your first meeting with the Maruti officials?

The Indian officials were in Japan the day I had to leave to meet GM officials for a collaboration we had just entered into. But before I left for my meeting with GM, I briefly met Mr Krishnamurthy and Mr Bhargava. I had a discussion at the Imperial Hotel for around three hours, during which they asked me all sorts of questions like what is required to set up a car manufacturing plant, what will be the size and so on.

I borrowed a white board and explained everything, after which I requested them to visit our plant. I excused myself as I had a prior commitment with GM but asked them to extend their stay in Japan a day, so that I could meet them on my return, which is what they did.

Were you ever worried about going into a country that had no manufacturing culture and no supplier base?

More than car-making, I showed how to set up a plant, how the management was supposed to be done and the first time I visited India, I also visited the half-finished plant constructed by Sanjay Gandhi.

You see, India was a big opportunity for SMC, which happened to be the smallest auto manufacturer in Japan, ranking 13th. So, I took India as an opportunity to show what we could do overseas and made it my resolution to make this project successful.

Did you get a sense that Maruti was an emotional project for Indira Gandhi and she wanted a national car company to be a part of her son Sanjay’s legacy?

Actually, I only met her twice and I never really felt that. During the opening ceremony, she spoke in English as well as in Hindi. It was when she spoke in Hindi, I was told she mentioned her feelings as a mother. Mr Krishnamurthy and Mr Bhargava would often share with me her feelings and how badly she wanted to realise the dream of her son to manufacture a people’s car.

Since we did not manufacture big vehicles but were capable of producing small vehicles, along with the fact that India too was capable of small vehicles at that time, and that Mr Krishnamurthy showed a lot of interest in manufacturing these vehicles, since all these factors were favorable, we decided to start work here.

I never decided to quit India, despite the prime minister’s loss, and the Murasoli Maran issue. So despite the interferences, I thought of going ahead aggressively, never thought of giving it up.

Your cost control is legendary but some suppliers feel, after your address in the ACMA 2015 conference, that you are squeezing them too much on costs, which is affecting quality. How do you make good small cars?

When you make small vehicles, the profit on them is also small. The total value of the car is also less. But this is precisely the challenge one must take. If you do not take up this challenge, there are only two options – you either get into manufacturing bigger vehicles, or you manufacture a vehicle like the Nano, which is basically a rickshaw. I do not consider it an automobile. To ensure the base level of quality in the vehicle, you have to get the cost right, specifically for small cars.

Has your experience with motorcycles helped you in making small cars?

Coming to your diesel engines, you have started your diesel journey with a humble and compact two-cylinder motor, just like your petrol motor. Is that a typical start for you, to keep it simple?

Yes, that is one of the reasons. Secondly, this approach allows me to add more cylinders of 400cc each and make an engine family that can go up to four cylinders. This allows me to make use of a common facility for the engine family.

You developed your diesel engine on your own. Is it because you couldn’t do it with Volkswagen?

First, let’s keep the Volkswagen issue aside. The Fiat diesel engines we use are very cost efficient and very compact. That is why we have been using Fiat diesel technology in our vehicles. Fiat guided us with the technical know-how of diesel engines, after which we decided to make our own diesel.

The plan was to develop diesel engines for our commercial vehicles and if we can improve further, then we could use them in our passenger cars too. There are two issues with diesel engines – one being the noise levels and second being that they are relatively heavy. We have sorted out both these issues to the extent that we can use them in both our commercial and passenger vehicles.

Which is your favourite Suzuki of all time?

The Maruti 800. That is what built up the foundation, on which our other models were based. We had only that one car in Japan and when I became president at Suzuki in 1978, this is the car that I started, which went on to become a big hit. And in India, I thought that the population is huge. So if the car succeeds, we would have huge volumes.

What is it about India that still fascinates you? People, traffic, food?

All of these factors! Had it not been all those factors, I wouldn’t have visited India over 200 times. When we were establishing ourselves, we used to wear our uniforms, and I would personally check the concrete on my factory floor and everything myself. I am 85 years old, and I know what Japan was before World War II. In those days, the highway between Osaka and Nagoya was not paved, there were poor people too, so for me, I know what hardship people have gone through and when I see poor people in India, I can understand.

I love Indian food very much and in fact since we sell more cars in India than in Japan, I have thought about moving our corporate headquarters to India but my family won’t let me!