“India will be the third-largest bus market for Scania in the next 3-5 years.”

Scania CV India’s MD tells Kiran Bajad that he is confident the Indian market will deliver on the growth the Swedish CV maker expects in both its buses and trucks. 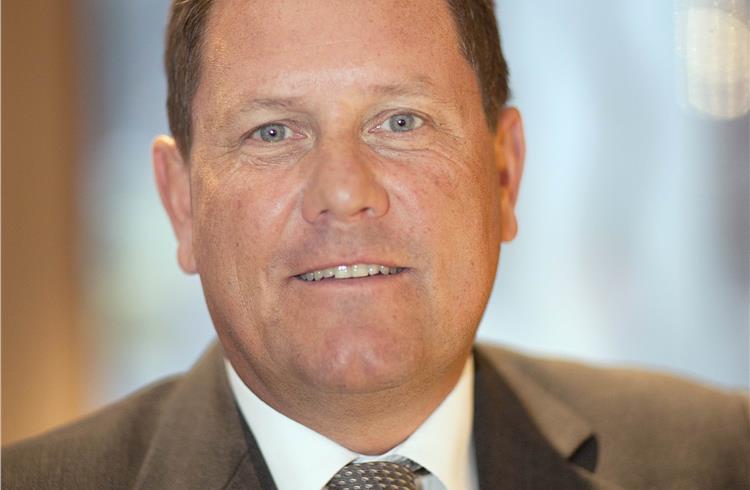 Scania CV India’s MD tells Kiran Bajad that he is confident the Indian market will deliver on the growth the Swedish CV maker expects in both its buses and trucks.

What is the progress on the upcoming bus plant in Karnataka? Is it on track for inauguration next month?
Yes, absolutely. In fact yesterday we have produced a skeletal of the first bus at the plant. Most of the work is done and the factory will start operation in mid-August. We have an annual manufacturing capacity of 1,000 buses and 2,500 trucks at this plant.

What are the bus numbers you are looking to produce at this plant?
This year we will produce 80 units – a mix of 13.7-metre and 14.5-metre coaches. Next year, this number will go up to 350 units including 12-metre coaches and the city bus.

What are the plans for the city bus given that there is no such offering from Scania in India yet?
Yes, so far we have not introduced city buses in India. But next month we are planning a demonstration of our first city bus in Nagpur. It is a 12-metre, low-floor bus, BS-V emission standard vehicle which will run on 95 percent ethanol which is available in India.
We will be talking to State Transport Undertakings for orders for this city bus and we have already spoken to some government departments. They have shown keen interest in this product because there’s an opportunity to use local Indian fuel. It will take many years to replace diesel but one has to start sometime. We have shown India that it is possible to run a bus on 95 percent ethanol which is a domestic fuel. We also plans to launch BS-IV diesel-engined buses next year and will start making low- floor city buses in India. Commercial launch will take place once the testing is conducted in Nagpur.

You have 35 Metrolink coaches on road in India at present. What is the customer feedback on them?
Our customers say that the bus is delivering on the TOE (Total Operating Economy) that we have promised. The bus is very silent and comfortable and passengers also have the same opinion. This is so because we don’t allow the bus to go 120kph and limit the speed 90kph.
The growing middle class and young population in India are demanding better transportation than what the country has today, which is where these kind of products come into the picture. Our vision is to sell and deliver 350 buses next year. We will sell 180 units this year; we sold 10 in 2013. So you can see the ramp-up of buses in India.
There is demand for buses here and we could have delivered 200 buses so far but have no time to produce as these buses are being bought from our Malaysian plant. Along with infrastructural and industrial projects, you will see growing tourism in India which is good for states like Kerala and Tamil Nadu. This means that transporting tourists will also offer a huge business opportunity in India as a market for coaches.
It was a tough time when we decided to invest in India, but one must invest during tough times. I am very happy about the investment made by Scania in India – it was a tough time but a perfect time for us. India will, in the next 3-5 years, be among the top three markets in the world for Scania buses. While we we will still have a very small market share in the overall bus market in India then, we will have a huge market share in the premium segment.

Over the last couple of months, the M&HCV segment started showing some recovery after two-odd years. Likewise, do you foresee some positivity in the premium truck segment?
Yes, especially with the trucks aimed at the mining segment and to transport coal. Surprisingly, coal import in India is increasing because India is the third largest coal producer in the world. We hear from our customers that more and more concessions are being given for new and existing coal mines, especially in Goa.

What is your truck sales target?
This year we are expecting to sell 500 trucks. In 2015, we aim to sell at least 800 trucks and 350 buses, which means we will cross the 1,000-unit mark. This are significant numbers because remember we have launched our product only in February 2013. This growth is very fast but this is what India wants –quality.

Is Scania looking to expand its dealership network in Delhi and Gujarat?
Yes, in Gujarat we have already signed up Navneet Motors for Surat, Ahmadabad and Rajkot. Now we are scouting for a partner in Delhi and I am sure very soon one partner will come on board for Delhi and Haryana. At the moment, we have five dealers and by end of this year we expect to have seven. Besides this, we use the L&T network for mining activities.

SCVI is actively pushing for driver training. What are the key gains?
Driver training is very critical to improve total operating economy of a vehicle. With training, a driver can save between 4-6 percent fuel.
With these buses, which have high technology levels, that we are introducing in India and enabled with our fleet management system, we can monitor the bus and the driver every minute of its journey. The system helps track every minute data from the bus to see how it is performing but also how the driver has been performing. We use this data not to fire the driver but to train him, to improve how to drive economically and safely. We also provide our Narasapura facility as well as our dealer’s premises to help train drivers.