‘We have very high expectations from the Ciaz and think it will do very well.’

Maruti Suzuki India's chairman speaks to Shobha Mathur on the Ciaz sedan, plans to roll out two new SUVs, having separate outlets for its one-tonne LCV, and going for double-digit growth in FY15. 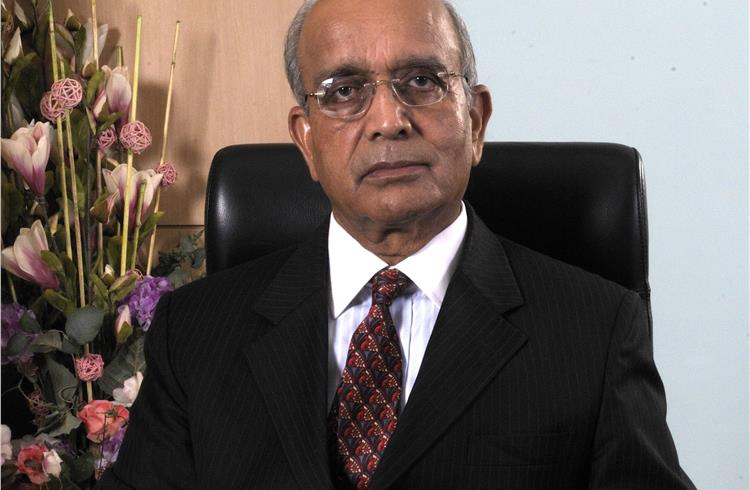 Since Maruti Suzuki has always been strong in small and midsize cars and that’s also the people’s mindset of the company, how do you plan to draw customers to the premium Ciaz sedan?
No, it is not true that we have not been in this segment because the Baleno and the SX4 sedan have been here, so we have been in this particular segment for a long time.

It is true that the success of these cars was not as high as we wanted, but it’s not been a bad success either. I expect the Ciaz will show that this premium car is much more acceptable to people than what the earlier models were. Our market share in this particular segment will also go up.

Overall, we have very high expectations from the Ciaz and think it will do very well. We are targeting the same customers as those for the Honda City sedan.

What will be Maruti’s roadmap in terms of SUVs and MUVs?
We are very much interested in entering the SUV market where Maruti has not been present so far and we will have our first SUV in the market next year. This will be a vehicle that Suzuki has already launched, so we will be launching it in the first half of 2015. A year later, in 2016, we have another SUV coming – a compact SUV in both petrol and diesel versions.

Is there any other segment that you are looking at?
We are looking at the one-tonne LCV segment. So along with SUVs, these are two new segments for us.

With the diesel-petrol price differential narrowing down, how will Maruti Suzuki’s product strategy change especially with decontrol of diesel also on the cards?
Our strategy has always been to adjust production to the market requirements and that will continue. We are adjusting our production according to the fall in diesel demand as has been the case in the last few months.

I think that what needs to be done is to see that production and capacity to produce is spread as closely in sync with actual demand as possible.

But is there now clarity on carmakers’ investment plans? How will petrol-diesel product equations change?
There is a need to create more capacity. The petrol-diesel equation has changed and is changing and we will just keep a very close eye on the market.

How far will rural markets shape the go-to-market strategy of Maruti Suzuki?
Rural markets are an important part of our overall sales. We had already reached 32 percent in terms of our total sales coming from that market. Going forward, I believe that the major growth prospects are in the small cities and rural areas.

How is work progressing on  the Gujarat facility?
We are working on the infrastructure at the Gujarat site and will start construction on the plant fairly soon, maybe after three months or so.

I think they have not fully appreciated the extent of these processes earlier. But now as we get nearer to the date and we are told by our experts and lawyers all the things which are required to be done before we go to the shareholders, it is clear that the time taken will be longer.

SIAM’s April-August 2014 results show MSIL rebounding to its earlier market share of over 50 percent in passenger cars from a share of 47.84 percent in the same period in 2013. How did Maruti achieve this in a tight market?

How do you think the current fiscal will end for MSIL?
It looks like a much better year than what we have had for the past three years and we should see double-digit growth.

Maruti’s customers were facing heartburn in terms of long waiting periods for the Celerio AMT and now with the same supplier providing AMTs to the Tata Zest, how is the supply situation?

It was unfortunate that there were long waiting periods but the actual demand for the AMT has turned out to much higher than what our marketing people estimated. And we are trying to increase supplies to the extent possible but at the moment, AMT supplies are coming from Italy and there are supply constraints there.

We are setting up our own production facility in India. Actually Magneti Marelli, our AMT supplier, is setting it up and the real increase in volumes will happen once this capacity is established which should be sometime next year. Still, there is an increase in supplies but not as fast as we would like it to be.

Maruti has experienced a lot of labour problems. Is the situation better now?

Last time there were some issues but that was more than two years ago, but there are no issues now. Everything is quite normal.

In terms of the railway plan, MSIL had got rakes developed and was building sidings inside the Gurgaon plant.  What is the status?

We have two rakes that have been manufactured and they are running. We are trying to get experience operating these rakes. But some issues have cropped up both with the manufacturers of the rakes and the railways and once these are fully sorted out we will go ahead and order more rakes.

Maruti has been showing interest in EVs and HEVs, and also displayed some concept models at the Auto Expo 2014. Your comments.
In electric vehicles, we have never been very positive because the issue has been that electric cars don’t have potential for any kind of volume sales in India.

There is no infrastructure to support electric cars for charging the batteries and, of course, no electricity either, so we do believe that there is potential in India for low cost hybrids.

How does Maruti plan to leverage PM Modi's ‘Make in India’ vision and how does Suzuki, Japan perceive it?
Suzuki has been the first one to follow the Make-in-India vision for a long time. Suzuki was the first  foreign company which started making in India.

The kind of manufacturing that Suzuki has done in India and the exports that have happened as a result, thereof, nobody has exported cars from India around 1988-89. Nor was export of cars possible at that time. Suzuki has come to India like any MNC and has been making in India.

What is the future export plan?
The export plan will very much depend on markets outside and to expand the markets they should be willing to accept vehicles and have the growth potential. Then we will try and export cars. Today we are exporting in numbers of over 101,352. It may not look too big but at one time we were exporting a lakh of cars that was 2.5 times the total number of cars being made in India.

Maruti was looking to set up assembly facilities overseas? Any progress on that front?
We are still examining the possibility of setting up an assembly facility in Sri Lanka.

This interview has been published in Autocar Professional's October 1, 2014 'NCR Special'