‘We believe we have a winner in the Mahindra Jeeto.’

Pravin Shah, president and chief executive, automotive, Mahindra & Mahindra, speaks to Amit Panday on the response to the refreshed XUV5OO, new Jeeto small CV, the success of the Bolero and the upgraded Thar CRDe. 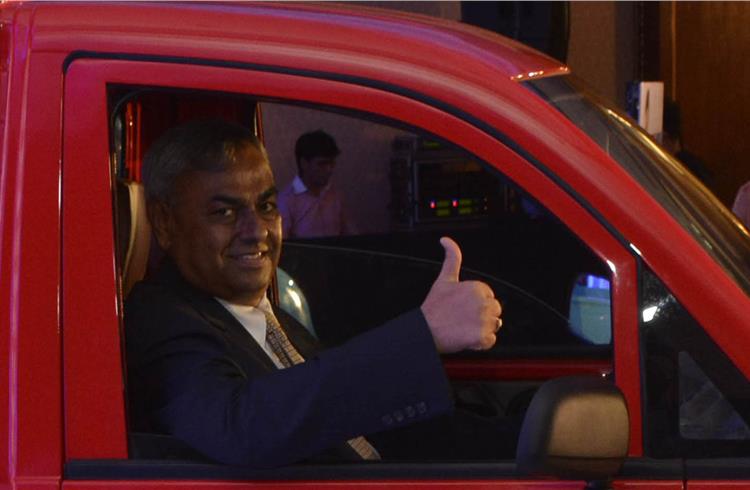 Pravin Shah, president and chief executive, automotive, Mahindra & Mahindra, speaks to Amit Panday on the response to the refreshed XUV5OO, the new Jeeto small CV, rising competition in the SUV segment, the success of the Bolero and the upgraded Thar CRDe. Excerpts:

While FY2014-15 saw some recovery in terms of market demand, how would you evaluate the same in the context of M&M’s performance?
I can only say that it was a challenging year and as I see, the market is improving. Of course, we continue to face challenges in terms of low demand from the rural economy, monsoons, ups and downs in the market forces that impact sentiment. But having said that, there will be new products that were not there earlier. Any new product(s) brings some sort of growth. Overall, the industry is looking at introducing many new products and that is expected to bring some vibrancy, revival into the market. The new upgraded Thar CRDe is the third launch from M&M in the ongoing financial year, the first two being the new XUV5OO and the small commercial vehicle Jeeto. I think we are on our way to deliver what we had earlier planned for this year.

How is the response for the new XUV5OO and the Jeeto LCV?
We are very happy about these two launches. The latest refreshed version of the XUV5OO, which was earlier launched in September 2011, offers many new features, technology upgrades and a change in the overall look and the style of the product without losing the originality. The model has surely given good response and traction which a car can expect in the price range in which it operates.

The LCV segment, on the other hand, continues to face difficulties. In the first quarter it has de-grown and was down even in the last financial year. (The LCV good carrier segment was down by 9.46 percent in Q1 FY2015-16 vs Q1 FY2014-15. In FY2014-15, this segment fell by 13.36 percent vs FY2013-14.) So this shows the status of the industry (in the LCV goods carrier segment). But with the Jeeto, we feel that we are enabling our customers to change, upgrade or first-time buy the new LCV for their business.

In the personal vehicle category, sometimes there is impulsive buying by customers; this never happens in the CV segment. The Jeeto is not a product that the customers will buy because good financing schemes are available or the product offers good value proposition or it has an attractive price. It will be purchased by its targeted customers when they will hear about the robustness of a Jeeto from their peers and leaders.

So it would be too early for me say anything about the Jeeto, which was launched only a few weeks ago. However, with the type of enquiries we are receiving at our dealerships and with the turnout at our dealerships for test drives of the Jeeto, we believe that we have a winner in the Jeeto. We call the Jeeto an all-new platform because it has 8 variants and it will have an option of passenger variant.

In the context of the performance by the government at the centre and a few states like Maharashtra and Gujarat, do you think that they are doing enough to boost the manufacturing sector in the country? M&M has recently announced an investment of Rs 4,000 crore for capex in Chakan over 7 years.
I think they are working in the right direction and they are doing what they can do in the given time frame, economic and political situation. I think the efforts are an honest attempt, the programmes (such as Make-in-India) are very well thought over and I think the priorities are fixed. Surely the manufacturing sector, which provides for a wider level of industrial activities and high level of employment, is the right choice for giving that thrust. I think what we expect in the given scenario is the quick result(s) but we should give them more time.

The Scorpio has been dominating the SUV segment for the longest time and continues to do so. It still is overruling its rivals like the Renault Duster and the Ford EcoSport. However, with the Hyundai Creta and now the Maruti S-Cross, is there a threat to M&M’s dominance in the utility vehicle segment?
This space is becoming more exciting. It becomes exciting only when people see more opportunities. Surely, looking at the demographics, available resources, changes in lifestyle and varying needs of travelling in groups indicates more demand for SUVs in the market. This is a segment which has much more potential because of these factors. This segment has space for many more players.

Being the market leaders we appreciate competition and this is not a situation where we are caught unaware. Going forward, we have plans to address this not only by means of new products and strategies but also through several initiatives that will help us remain the segment leader. I feel that we are on the right path.

How would you define the current customer base of the Bolero?
The Bolero is one vehicle which has close to seven variants. So with the product portfolio that we have, we cater to varying needs of different type of buyers. Due to the drop in the rural economy, the Bolero models have seen a slowdown. However, I think the Bolero continues to perform at its best in its existence that easily stretches over a decade. It always surprises us in terms of numbers, market share and other areas. It has been selling more than 100,000 units each year for more than three to four years in a row now. Surprisingly, it had never seen those kind of numbers earlier when it was launched. Also, even at Mahindra, we haven’t been static about Bolero ever since its launch. The Bolero has seen many upgrades, refreshes and I think the product has come a long way and it has proven its worth.

Do you think that in the near future, the numbers of Bolero buyers will increase?
We are conscious of changing customer needs. We are a most listening and acting organisation and we notice the changes and implement them faster than others. This is so because we are a home-grown company. We have plans to roll out new products that will complement existing products. In this case, if the customer does not find some feature(s) in one model(s), he will find the same in its complementing product(s). Following the Bolero’s launch, we launched the Scorpio and people said Bolero will die. They were followed by the Xylo and the XUV5OO. All these products have not only co-existed but also fared well in the market.

We understand the product positioning and product configuration very well. The positioning of a product really reflects our understanding of customer needs, and with a very unnoticeable overlap.

Why was the Thar chosen to be the five millionth vehicle rolled out by Mahindra & Mahindra? While it’s not easy to execute a niche product like the new Thar in the market, how much has the company spent on this project?
The Thar is a very important product portfolio in our stable and not only in terms of numbers. The Thar reflects the genesis of Mahindra as an automobile company since the time we became operational in 1947. The Thar depicts and makes people understand what we are capable of.

While the Thar is a legendary product, it truly represents Mahindra’s DNA which is a tough, rugged, reliable, go-anywhere attitude. We were happy to have the Thar roll out as the five millionth vehicle earlier this year. This is a product that will always remain a critical element of our operations, and it also has a huge fan base not only in India but also globally. 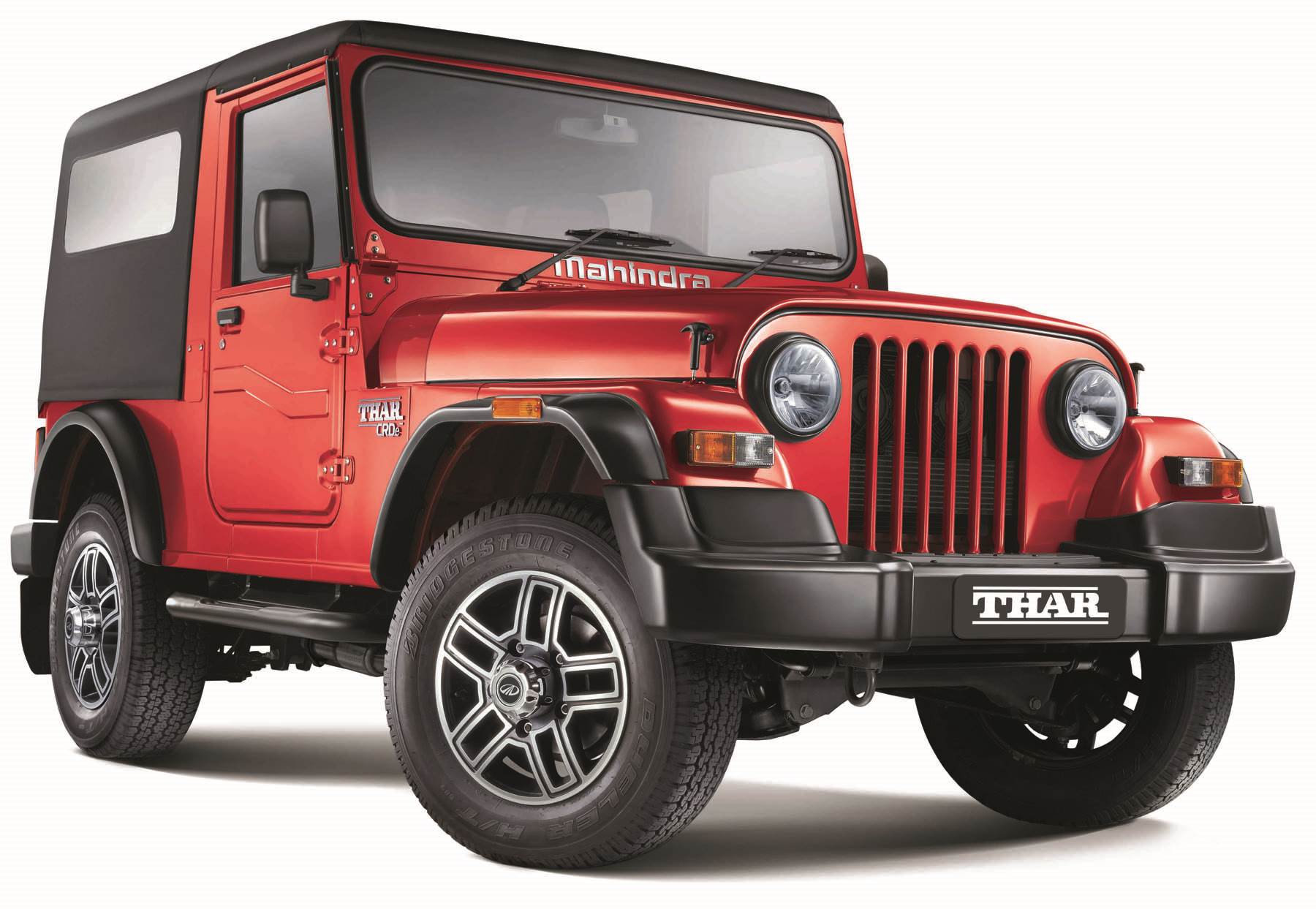 The Thar vehicles are an honest attempt to enable more people, who are passionate about off-road driving, fulfil their imaginations. The Thar is for people who differentiate themselves and want to get to places where there are no crowds, no roads. The vehicle has become a part of their lives; they go back to their friends and share stories. This requirement is increasing by the day and this is also fuelled by the disposable incomes. The upgraded Thar surely incorporates all required changes that our off-road enthusiasts have been demanding. We have improved the product (Thar CRDe) on five fronts – exteriors, without losing the identity of the vehicle; interiors to provide better comfort and convenience along with the ownership pride. The fifth area of improvement is the introduction of mechanical locking rear differential technology.

We have invested close to Rs 30 crore in the Thar project but don’t go by the amount of money that we have invested. We are a brand that has an expertise in producing 4x4 vehicles and we keep harnessing our capabilities on that front as we go along. That comes to us naturally. Cost, on the other hand, is just a part of that. Without the capabilities, you cannot develop such a capable product. The Thar is at the centre of our off-road activities.