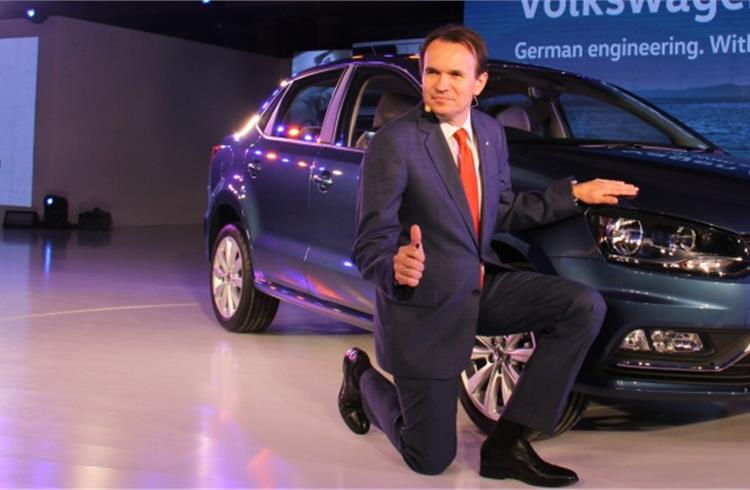 The Ameo is pitted to be VW’s game-changer model in India. Can you talk about its development, especially since it is the first-of-its-kind project in VW’s global stable?

The Ameo is truly an Indian car from its origins where it was initiated by the Indian team as that segment does not exist anywhere else in the world. These specific packages are not needed anywhere else in the world. The styling and product package were influenced by the Indian team and were carried out in the Volkswagen development network, using several providers in our large R&D network. It was also one of the fastest projects in the Volkswagen world. This segment has been growing so fast that we found good opportunity for the brand to bring out new customers with an offering in that segment.

When did work start on the Ameo?

Initially when you look at the segment, it came out to be really successful in 2012 and 2013 and that was the time when we really started to make the plans and go ahead.

Since VW’s focus is on premium products priced at an affordable cost, how were you able to optimise the cost of the Ameo?

The key aspect is that you need to localise and in our history here in India we have done one thing – we have increased localisation, step by step, and we are benefitting from that. We also have an engine assembly facility at our factory in Chakan in Maharashtra, which is also providing engines for the Ameo. Therefore, we could get a reasonable package together to position the car competitively.

Since VW has 80 percent localisation across the board, which are the parts that are still to be localised in India?

There are components like gearboxes where you have to have scale if you produce in India or for the rest of the world, which we currently don’t foresee. The car also comes with a specific gearbox that will remain an imported one. So it is not one car; we look at the full car range where we see which are the right parts to bring into the country.

Since the Ameo is being positioned in the premium compact segment where the Maruti Dzire, Tata Zest and the Honda Amaze are large players. How will VW compete successfully here?

This segment was missing at VW. The Ameo comes with VW quality and safety potential, and the drivability. The Ameo comes with a superior drivetrain which gives it a much better ride. These are the things that people are looking for. There was no VW car to buy in there, so we created that package and also added some more features. The car gets a rear camera view parking sensor, cruise control and rain-sensing wipers. These features will make the Ameo competitive.

Does VW have adequate capacity to cater to sudden demand as this is a fast-growing segment?

The Indian car market is very dynamic and can grow in up to two digits and volumes will grow along with that. We will say that in 2016-17 we will be safe with our capacities at Chakan.

VW is currently exporting 60 percent of its production from India. Will the Ameo be exported to overseas markets?

The Ameo is truly an Indian concept and this segment only exists in India, so we have been looking at it only for India. However having said that, if there is demand in a country for a small notchback sedan car we will see but generically it is only for India.

VW recently faced a lot of emission-related issues with the recall of cars in India to start by summer. What is the roadmap for it?

The recalls have started in Europe by the end of January and we will do it in a staggered approach. We have a fairly high number of cars that have to come back and in order to give the customer a seamless experience when he comes to update his car, it will be done in a staggered manner. This will start in the first half in India, then we will see how we can provide the customer the capacity and seamlessly get his car updated.

The Union Government has recently announced the transition to the Euro 6 emission roadmap by 2020. What will be VW’s strategy in this regard?

We have actually got Euro 6-compliant cars. The Beetle 1.4-litre petrol can adhere to Euro VI emission levels and the Polo GTI, which we are launching, will do the same. We have the capability of doing it and secondly we think it is the right step for the Indian auto sector to go into providing the latest emission technology that benefits the customer and also the industry.

VW displayed the Passat plug-in hybrid technology at the Auto Expo. With the government focusing on hybrid and EV technology, what are your plans to bring them to India?

For us it is a kind of a test balloon. First of all, we think the strife for introducing the new generation of fuels and new generation of technologies is needed in India. Of course, you need some infrastructure to run electric cars but I am not convinced we can do it from one day to another easily. However, we have to make a start and that is what we will like to do – conduct tests how the car runs in India, how it gets along with the road conditions and the charging infrastructure. For us it is also a kind of a launch for the eighth-generation Passat that we will bring to India at the end of 2016.

VW has already announced plans to bring 4 new models over the next 15 months. How will you position them in India?

There are two directions – one is the enlargement of the VW brand. When we get our portfolio enlarged into a higher segment like the Passat which will be our flagship, the Tiguan is marked clearly into the premium SUV segment and the TTI which is an extremely sporty and niche car for passionate automotive lovers where we will not sell great numbers but it will drastically enlarge and increase the reach of the brand. Secondly, we have the volume cars where we have a larger buyer base that is the Ameo, which will get us increasingly new customers that have not bought a VW as the car they wanted was not there.

How will the sales and service network keep pace with the new product rollout?

Currently in our network, we are capable of launching these cars. I think there will be a phase of expansion coming with the launch of these cars where we get more into Tier 2 and Tier 3 cities so that the reach is bigger. Now we are in more segments and can actually do that. But we are not up to drastically increasing our network because we want to have a dealer network that will make profits and also support the growth rate.

Are there any new markets that VW could target for exports?

We are exporting now from Chakan to almost 90 countries and there won’t be much left to export to except some European countries. For the Ameo, exports are not a priority but of course if there is a market where we can use India as a production base for supplies we can consider it.

We hope that the dynamics of the market stays as they are. It has shown good growth and the December and January were very positive for us. If the market can continue this growth, we will also outgrow the market.