Will luxury carmakers have a smoother ride in 2018?

After experiencing a roller-coaster ride for the past two years, luxury carmakers in India are cautiously optimistic about future sales even as they seek stability in government policy. 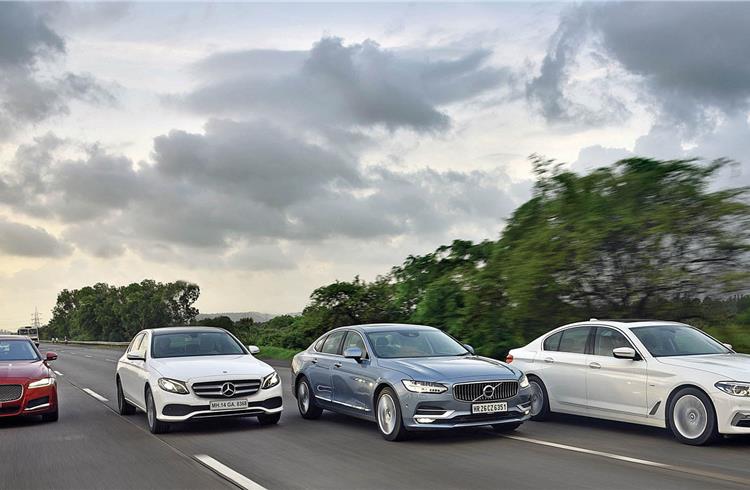 Snatching defeat from the jaws of victory is an idiom usually reserved for the sporting field. One could though apply it to the government's knee-jerk move of revising GST rates upwards around two months after they were introduced. Among the sectors affected is the luxury vehicle segment.

The luxury vehicle market in India was poised to grow at a healthier clip in 2017 than in 2016 but now a slower rate of growth is anticipated. Higher taxes on large vehicles under GST, the country's biggest tax reform since Independence, has played dampener in the last quarter of CY2017.

"GST has clearly impacted the luxury vehicle industry. Volumes would have easily grown by a good double digit in the range of 18-20 percent," Rohit Suri, president and managing director, Jaguar Land Rover India, told Autocar Professional. "The impact of GST will, perhaps, result in a growth of high single digits or low double digits," he added.

Total volumes in the luxury car market in India are estimated to have declined nearly 4 percent in 2016 to around 33,000 units compared to the previous year. Overall sales numbers for 2017 are estimated to be around 35,000 units, due to the surge of demand following the positive GST rates before slowing down due to the upward-revised GST prices.

Sharing a similar view, Roland Folger, managing director and CEO, Mercedes-Benz India, said GST was a missed opportunity for the government as higher volumes for the luxury cars only translates into higher revenue generation. "GST was a lost opportunity for the government to boost the luxury car industry’s long-term growth potential," he told Autocar Professional over email in response to a query.

Initially, the tax incidence on passenger vehicles (with the exception of hybrids) was dropped, and carmakers passed on the impact of this price cut to customers. Cars were to be taxed at a flat rate of 28 percent, with an additional cess (between 1 and 15 percent) levied depending on vehicle category.

The GST Council, however, realised the total tax incidence on motor vehicles had reduced and hiked the tax. As a result, under the new GST code, the additional cess on midsize vehicles was raised by 2 percent to 17 percent, on large vehicles by 5 percent to 20 percent and on SUVs by 7 percent to 22 percent. Unsurprisingly, prices of luxury vehicles went up as most of them fall in the midsize to large vehicles category. This meant that prices were nearly back to pre-GST levels.

The tax revision, implemented sometime in mid-September 2017, came as carmakers were on course to post handsome growth in the first nine months of the calendar year. It was a much-needed recovery following a disastrous 2016 which was riddled by a slowdown in demand due to demonetisation, higher cess on luxury cars and the Delhi ban.

Audi India had anticipated a better performance for luxury vehicle market for 2017, according to Rahil Ansari, Head, Audi India. "However, the cess hike definitely disturbed the positive momentum. Uncertainty in the minds of customers with regard to GST as well as the cess hike had a negative impact on us," Ansari added.

According to Suri, "Overall, JLR India's growth rates were very high in August and September but October and November 2017 has clearly dampened the overall momentum that was there already in the market. This is because now the GST rate, for example for SUVs, is at 50 percent, as opposed to 43 earlier,” said Suri.

BMW India registered a 17.3 percent year-on-year growth in sales to 7,138 units in the first nine months of 2017. Volumes saw a boost in Q3 (July-September 2017) due to the upbeat demand for the new 5-series. Like Mercedes-Benz, BMW  also registered its best-ever third quarter with sales of 2,549 units.

British carmaker Jaguar Land Rover India said its volumes grew 45 percent in the first nine months of the calendar year 2017 to 2,942 units on the back of new launches and dealership expansion.

Luxury car sales failed to sustain the significant uptrend seen in 2015 as many policy changes hurt demand. With most hurdles behind them now, OEMs are now hopeful of an upbeat 2018.

Outlook for 2018
Luxury carmakers are now looking forward to a smooth ride, assuming all the headwinds are behind them.

Mercedes-Benz India is hopeful of continuing its growth momentum into the new year. The German carmaker, along with maintaining an extensive product line-up, is also aggressively expanding its dealership network. The company is expanding its footprint in Tier 2 and Tier 3 cities and is confident of selling over 100 units annually from all dealerships in these locations.

”We are also moving ever close to our consumers and expanding our retail and after-sales network in T2 cities. In December itself we drove into Salem, Hoodi, Thrissur at the same time in Mumbai with our third partner,” Folger said. However, he cautioned, "We hope there will be no unpleasant surprise from the policy front, which proves to be yet another headwind for the luxury car industry’s growth." 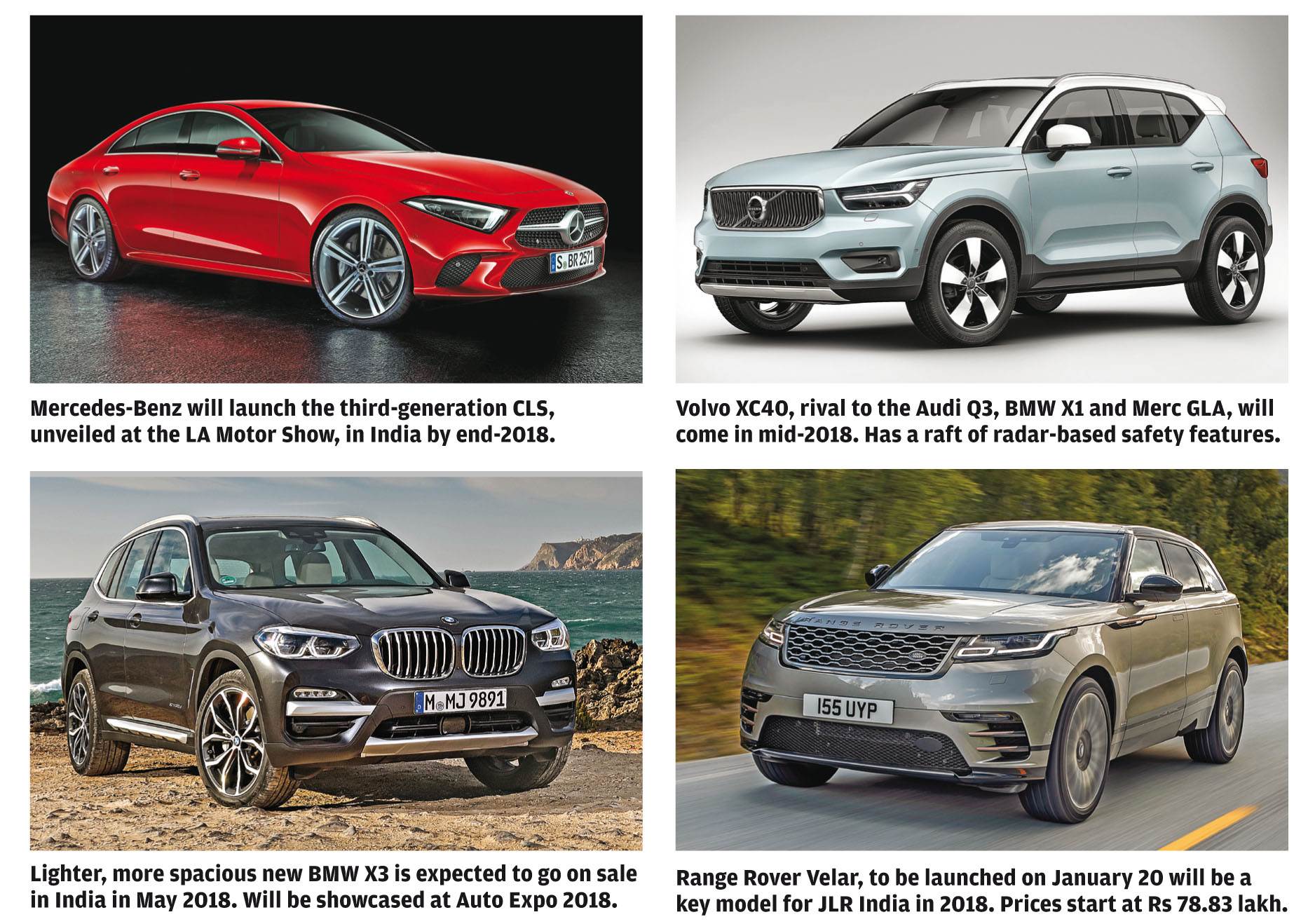 As for Jaguar Land Rover India, the company has revised prices of its CKD products (Discovery Sport and Range Rover Evoque) in April and is geared up to take its competitors head on. Additionally, Land Rover will be hoping to build up on its volumes on the back of the Range Rover Velar SUV which is due to be launched on January 20. "2018 is going to be an important one with the launch of the Velar," affirmed Suri. The carmaker recently announced prices for the Velar, starting at Rs 78.83 lakh for the base 2.0-litre diesel and going up to Rs 1.37 crore for the fully loaded variant.

Swedish carmaker Volvo Auto India, which recently launched the XC60 at a very competitive price of Rs 55.90 lakh, hopes to perform well banking on the momentum it has attained this year. The company recently started assembling the XC90 at its plant in Bangalore and plans to begin local assembly of the XC60 as well. "We’re not ready to announce anything specific but we are certainly thinking longer term about building on our SPA (Scalable Product Architecture) platform here. So the XC90 is built on the SPA platform and under consideration could be the S90, the V90 Cross Country and eventually the XC60. But that’s certainly a step that is, I would say almost inevitable," Charles Frump, managing director, Volvo Auto India told Autocar Professional.

The Swedish carmaker aims to double its market share in the luxury vehicle segment to 10 percent by 2020. "The XC90, the S90 and the V90 Cross Country have really propelled us to 2,000 units this year (2017) that we are going to hit and we’ll do even more next year. So, product is a big investment for us over here," Frump said. Notably, the carmaker is also investing in more dealers and aims to double its dealer network over the next couple of years.

No more flip flops in policymaking
Stability in economic policies is the need of any business and the scenario is no different for luxury carmakers. To minimise the affect of global factors, carmakers want the government to rationalise taxes as it will facilitate maintaining a long-term strategy, critical for any business and particularly luxury vehiucles. “The government should re-consider the exorbitant taxation luxury car industries face and it is high time we look at tax rationalisation,” said Folger.

"Penalising the luxury segment, which already complies with all the laws of the land, is not addressing the key concern of increasing emissions. We need to get rid of the actually polluting older diesel vehicles running on BS II and BS III," he added.

In the same context, Suri said, “We are just 1 percent of the total passenger car market and the reason is high taxation. In our most mature markets, we are able to balance things out (external factors). You will see the luxury car market to be at around 4-5 percent.”

This feature has been published in Autocar Professional's
13th Anniversary Issue, dated December 15, 2017