ZF goes all out to increase localisation

The global major in driveline and chassis technology as well as active and passive safety technology is going all out to make India its engineering, manufacturing and sourcing hub. 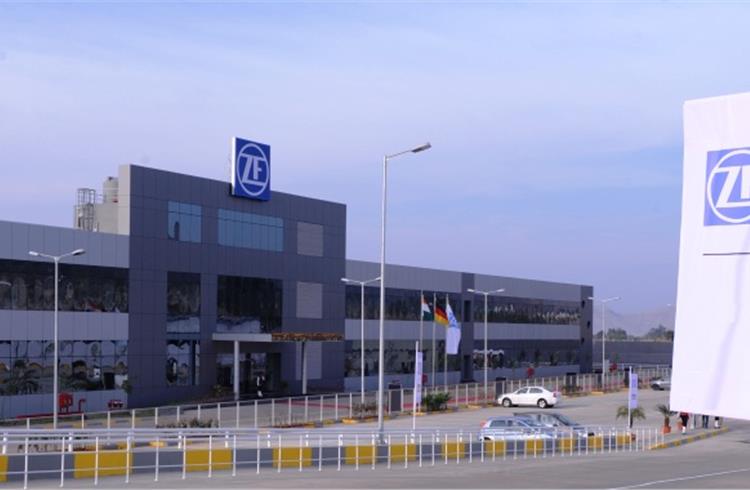 ZF Friedrichshafen AG, the 29.2 billion euro global leader in driveline and chassis technology as well as active and passive safety technology, after consolidating operations is looking to aggressively tap growing opportunities in India. The company has recognised Asia-Pacific as the next growth opportunity with India being a major part of this growth plan.

After last year’s acquisition of TRW Automotive, which has been integrated within ZF as the global active and passive safety technology division, the combined entity has a number of joint ventures in India. ZF, which has been operating in India for over three decades, has nine plants catering to automotive and non-automotive segments. With TRW, its presence now stretches to 19 production facilities with 12,000 employees.

“In India, we are present in commercial vehicle and car powertrain products and industrial technology. With product offerings of transmission and chassis components for trucks, clutches for passenger cars, axles and transmission for off-highway and industrial gearboxes for wind turbines, we are positioned for an exhilarating phase of our Indian journey,” said Suresh KV, president, ZF India, in a media interaction recently.

ZF in India has two wholly-owned subsidiaries based in Pune and Coimbatore. In 2015, the new business park was set up in Chakan, Pune integrating various businesses at a single location. This includes truck transmission and chassis components and clutches for cars. The Pune plant currently uses only 25 percent of its land parcel, leaving plenty of scope for future growth. However, given the company’s focus on cornering a bigger share of supplies to Indian passenger vehicles and also on expanding its product portfolio, new products like mass flywheels will be introduced soon in India. This will see the company augment capacity at the Pune plant. 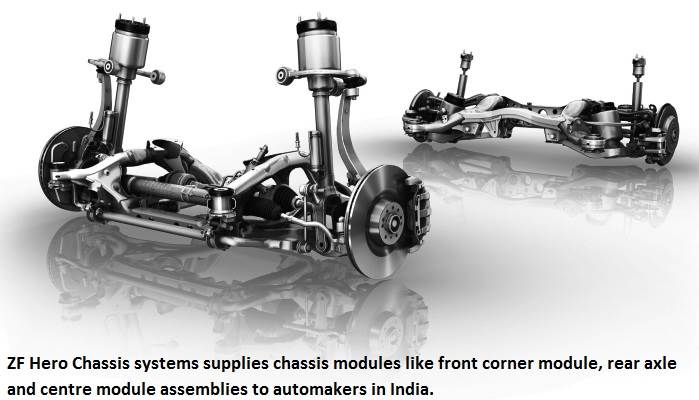 As part of its integration, the Pune-based plant which makes transmissions and axles for off-highway vehicles has been shifted to Coimbatore after ZF acquired Hanson Drive Ltd in 2011 as part of its global strategy to tap opportunities in the industrial segment. At present, ZF Coimbatore is the second wholly-owned subsidiary which manufactures wind turbine gearboxes and axles and transmission for off-highway vehicles. According to Suresh, technology in India is coming in line with what ZF offers globally and this will enable the company to penetrate the Indian market further in the coming years.

Further tapping talent in India, in August this year, ZF announced the setting up its first-ever India Technology Center in Hyderabad which will be dedicated to software and mechanical engineering. The new Technology Center, which will house 2,500 engineers by 2020, will support ZF’s global development teams while enabling the company to accelerate local product development. 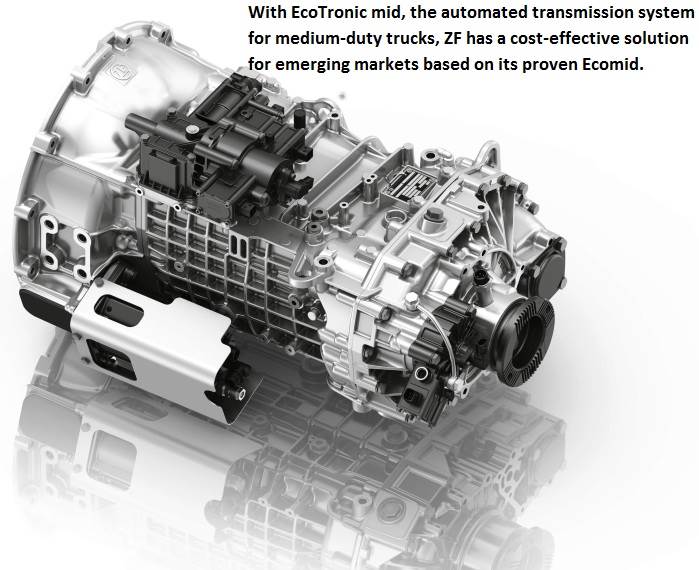 ZF is aggressively pushing its localisation strategy in India. In 2015, it set up the Pune business park after consolidating its India operations and bringing all its products under a single roof. While the site location size is a humongous 85,000 square metres, the built-up area is 16,000 square metres housing assembly lines for the Ecomat range of transmissions for heavy duty truck applications, chassis components and passenger car clutches.

The nine-speed Ecomat gearboxes for heavy duty applications like tippers and tractor-trailers go to key Indian clientele including Ashok Leyland, Tata Motors, Volvo Eicher, AMW, MAN Trucks India and Volvo India. While manufacturing capacity is not being fully utilised at present, ZF believes India offers tremendous opportunities for its transmission division and volumes will go up in the near-term. The company has also successfully carried out an import substitution programme for passenger car clutches. It began production last year and is now supplying to Ford India and Mahindra & Mahindra.

Before this plant went on stream, ZF was supplying imported clutches to Ford India through its Slovakia plant. The current annual capacities of the plant include 25,000 truck transmissions, 120,000 torque rods and V- links and 600,000 passenger vehicle clutches. By mid-2017, it will begin production of dual mass flywheels with an initial capacity of 350,000 units. 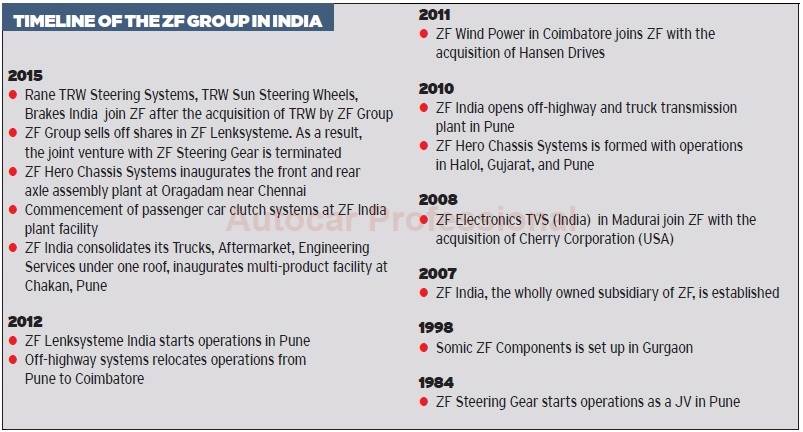 At present, localisation levels for some of its products are on the higher side – truck transmissions (75 percent), chassis components (90 percent), and passenger car clutches (75 percent). Given the criticality of these components, some key parts continue to be imported from ZF’s Germany and Slovakia plants. The passenger car clutch range starts from 160mm to 300mm with two separate assembly lines for the clutch covers and clutch disc. The clutch disc and cover go as a single set to passenger car OEMs and currently 700-800 sets are being manufactured in a single shift due to lower volumes. A single car has a clutch cover and clutch disc pair which is mounted on an engine. “Since OEMs are making India an exporting hub, we see our volume increasing rapidly by 2018. This will enhance our capacities and also prompt us to work in multiple shifts,” said company officials at the Pune plant. This facility has 170 employees with all the assembly associates being diploma holders who have received extensive training.

To grow its transmission business faster, ZF has to start localising its heavy duty transmission, given that most Indian commercial vehicle OEMs like Tata Motors and Ashok Leyland prefer making the volume-segment gearboxes in-house, utilising their own capacities rather than buying from suppliers. This makes suppliers like ZF focus on heavy-duty applications.

ZF currently manufactures Ecomat gearboxes for heavy duty applications in a single shift. Every month nearly 300-400 of them are being produced; it is estimated that a single gearbox takes half a shift to be fully assembled. Given that the gearboxes are a critical product for truck powertrains, once ZF is qualified as a supplier to OEMs, load testing is conducted at the test bench with rigorous endurance and lifecycle tests in Germany, after which that they are approved for serial supplies. In comparison, chassis components see huge demand which means they are manufactured in all three shifts.

ZF’s Pune business park also houses a quality laboratory for carrying out inspection, testing and detection. It is staffed by 12 engineers working on every product aspect including quality of material coming from vendors and final product quality before the product is cleared for mass production.

The Pune manufacturing facility also has a dedicated unit and warehouse for ZF’s aftermarket business which has branches in Bangalore and Mumbai and 22 dealers across the country.

ZF Hero Chassis Systems, the joint venture between Hero Motors and ZF set up in 2010 when ZF acquired a 50 percent stake from the OP Munjal Group, is targeting speedier growth in India. The joint venture, which utilises European technology and expertise, is a supplier of front corner modules and rear axle sets to automakers like Maruti Suzuki India, General Motors India and Honda Cars India.

The company has three plants in India – in Talegaon, Pune, Halol in Gujarat and the third in Chennai, which supplies chassis systems to BMW India as part of the German carmaker’s 50 percent localisation programme for its Made-in-India BMWs. In line with its local-for-local concept, ZF Hero looking to provide its customers products for local production with European technology. The company offers engineering services in new product design, engineering, development and manufacturing. 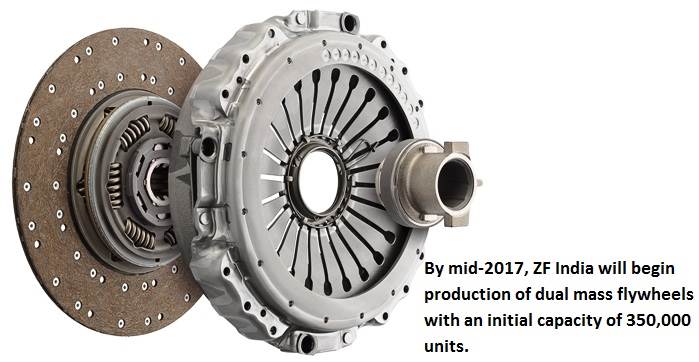 A visit to the Chennai plant reveals that, at present, it is dedicated to BMW India and located in close proximity from the car manufacturer’s assembly facility. The products include front axle, rear axle and strut assembly for BMW cars in India. At present, the plans cater only to BMW India; however, going forward, the company is open to supply to other OEMs if demand comes its way as it can comfortably expand capacity. The plant, which is located on a 75,000 square metre site, has an annual manufacturing capacity of 12,000 axles.

The plant sources material from various suppliers to the BMW global network. The inbound material is stored at the one location and the entire system is managed by SAP systems to handle critical sourcing within the plant. Running in a single shift, the plant has two assembly lines for the front and rear axle in a ‘U’ shape. The material comes from one side, gets fitted at nearly eight sub-assembly stations before the final product gets shape and goes to outbound area for supply.

According to Suresh, the ZF Group has now got the right foundation in India and is now well positioned to tap future growth with its technology and manufacturing strength, application engineering and basic design. While its India journey began with joint ventures, today the company is driving itself on its own terms for the majority of its product.

The recent acquisition of TRW has given it a new shot in the arm as well as the potential to utilise the technology platforms from both companies to better address megatrends such as fuel efficiency, increased safety requirements and autonomous driving.