Japanese carmaker, which regards the protection of the global environment as one of its top priority concerns, is not only piloting new cleaner processes and greener technologies but is also afforesting the Bidadi plant in Karnataka. 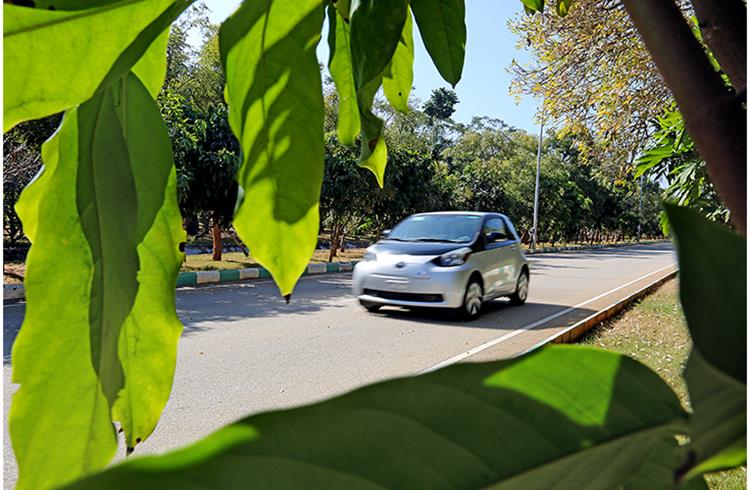 The production of vehicles and engines in manufacturing plants has the potential to impact the environment. To ensure that car manufacturing can make more with less, Toyota developed its world-famous Toyota Production System (TPS) several decades ago. Over the years, TPS has also evolved to include environmental targets.

Along with TPS, Toyota, the world’s second largest automaker, has many other credits to its name, be it the legendary reliability and durability of its cars or its relentless focus on sustainability across all its operations as well as extending the environment-friendly approach to the countries it has set up shop in. Actually, being green is a global viewpoint for this Japanese auto major. Therefore, it comes as no surprise that Toyota is practicing what it preaches, not just in Japan but also in other parts of the world.

The company’s Indian arm, Toyota Kirloskar Motor (TKM) aims to be a carbon-neutral company in the wake of endearing sustainability challenges. TKM, at its two-line facility in Bidadi industrial area on the outskirts of Bangalore, in Karnataka, is taking large strides towards becoming a zero-carbon manufacturing plant with a larger goal of achieving a zero-carbon vehicle lifecycle for all its models which, it says, is an extremely difficult task encompassing all stakeholders of the automotive supply chain.

The company produces two of its most popular products — the Innova Crysta MPV and Fortuner SUV — at its 100,000-unit annual capacity line, also known as the Plant 1, while the Etios hatchback and sedan, Yaris sedan and the Camry Hybrid are all built at the 210,000-unit Plant 2, housed within the same sprawling 432-acre campus at Bidadi.

Beacon for environmental excellence
Abundant sustainability measures mean that Plant 1 is already functioning and carrying out operations using 80-90 percent renewables for its energy consumption, with a vision of completely moving away from fossil fuels such as coal in the coming years. In terms of water conservation, Toyota says, it has completely stopped intake of fresh water for plant operations from the Kaveri river supply in the area and has instead, built two ponds within the plant which get regenerated by rain-water harvesting and cater to the requirements of the paint shop. The paint process in itself has been switched to using low-VOC, water-based solvents to minimise impact on the environment by containing harmful discharge and effluents. 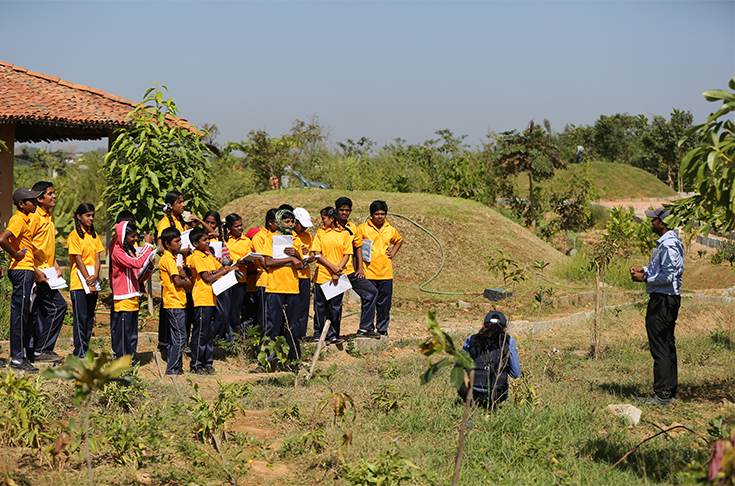 Crucial to the long-term vision of the Eco Zone park is the function of being not only a learning resource centre but also a space to reignite a sense of wonder in the hearts of children and researchers alike.

As a responsible global organisation, Toyota is beginning to spread these measures at its suppliers and dealers as well to bring a chain reaction in the entire ecosystem. All these initiatives, six in total, formulate what the company calls the ‘Toyota Environmental Challenge 2050’ by the virtue of which it aims to contribute to a better society through a net-positive impact.

It has also set up a recycling facility in the plant to completely dismantle and destroy the test cars, crash cars and in-house vehicles and not contribute to any automotive waste when the country still lacks a definitive scrappage policy for vehicles, nor  a number of scrappage centres working scientifically. What it does directly for society, however, as part of its CSR, is that the company donates engines and transmissions coming out of these discarded vehicles to training institutions and polytechnics within the Karnataka state and facilitates student education and their skilling in the automotive domain.

Walking the green talk
In an exclusive visit to the TKM plant in January, Autocar Professional visited first-hand what the company calls an ‘Eco Zone’ — a 25-acre greenland in the heart of the manufacturing site, housing seven different kinds of theme parks, an educational building for school kids and a 3.2MW capacity solar power plant powering the fully green belt, which was inaugurated in September 2019.

There are about 50 different species of trees that have been planted in the Eco Zone by a unique Japanese methodology called ‘Miyawaki’ which develops self-sustainable natural forests that see fast growth of saplings by planting native species to create biodiversity, food chain and ecosystem.

While the first Miyawaki mass-plantation activity took place way back in June 2009, the Eco Zone today sees dense afforestation with a cover of over 250,000 trees, increasing the area’s biodiversity and reducing land degradation. It also acts as a natural dust-sink and reduces noise while decreasing rainwater run-off, increasing water percolation and effectively protecting the TKM facility from natural disasters.

The Eco Zone comprises a 'value theme' park, which, in essence, explains the importance of waste management, depicts solutions for effective value creation from waste and the ways to move towards a ‘zero-waste’ society. The park has artistic creations from waste generated at the shopfloor as well as e-waste produced from general operations of the plant. It also has various waste management solution demos such as a biogas plant, composters, a briquet making unit and paper recycling unit among others. The park also disseminates information on business opportunities in waste management by teaching young entrepreneurs from local villages on how to leverage scientific waste management techniques to build products that command a better market price as finished goods than in their basic waste form. The Eco Zone also houses a Toyota Plaza which demonstrates TKM's efforts towards environmental conservation and hosts what it calls the India Demonstration Centre for Green Mobility, which depicts evolution of eco-friendly automobiles and green mobility solutions.

Walk a little more and one comes across a wetland and a pollination meadow depicting the importance of a suitable habitat for different types of pollinators such as insects, butterflies, bees and birds to aid cross-pollination and produce fruit or seed. The pollination garden boasts 75 species of plants that are home to these natural pollinators. The medicinal garden and the organic garden see in-house cultivation of Ayurvedic medicinal plants as well as food crops to support the day-school that imparts knowledge to children from adjoining schools who visit the Ecozone every day and return with plentiful insights on green and sustainable living. 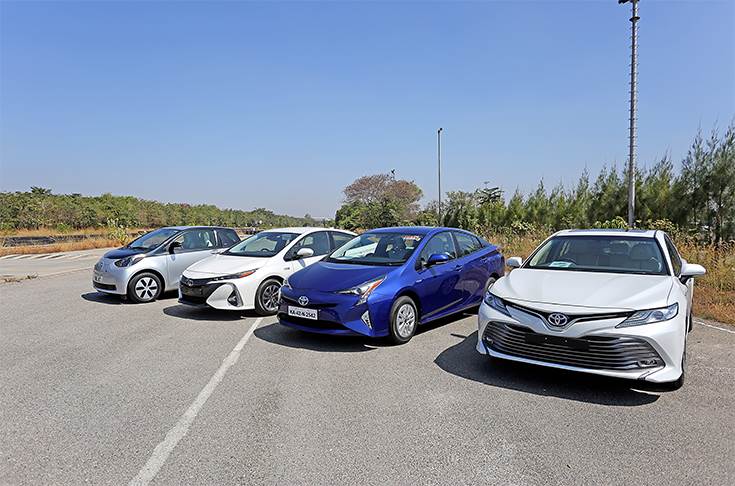 With an aim to achieve a zero-carbon vehicle lifecycle, Toyota is aggressively pushing hybrid and EV tech with a range of green cars ready to be offered.

In an area adjacent to the plant, TKM runs the much- lauded Toyota Technical Training Institute (TTTI), working in the direction of imparting relevant skills to youth and making them willful breadwinners for their families.
Toyota has been the pioneer of workman training in India with the TTTI and has so far trained over 573 students across various domains within automotive. Also, to scale up efforts in the skilling sector, it initiated the Toyota Technical Education Program (TTEP) with Industrial Training Institutes (ITI) throughout India and has till now skilled over 8,000 people to become work-ready in the automotive industry. In addition, the company has also set up eight Toyota Centres of Excellence in different engineering colleges across Karnataka to amplify practical learning for engineering students.

Last but not the least, there’s an evolution park depicting the origin of the planet and the human race by use of murals on natural stones as well as installation of some well-preserved pre-historic fossilised remains.
Our visit to the TKM facility proved to be an eye-opener on how the company is acting swiftly upon the multiple challenges lying ahead of the human race, threatening its survival as well as the complete existence of the beautiful planet we dwell in. As the 17-year-old climate activist Greta Thunberg remarked at the 2020 World Economic Forum in Davos, “Our house is still on fire,” and the onus lies upon each one of us to review actions in our day-to-day lives and be as eco-friendly as possible to leave Earth a pretty place for future generations — on feet and on wheels.