The sub-four-metre compact SUV is a practical choice for family buyers on the lookout for a city-friendly crossover. 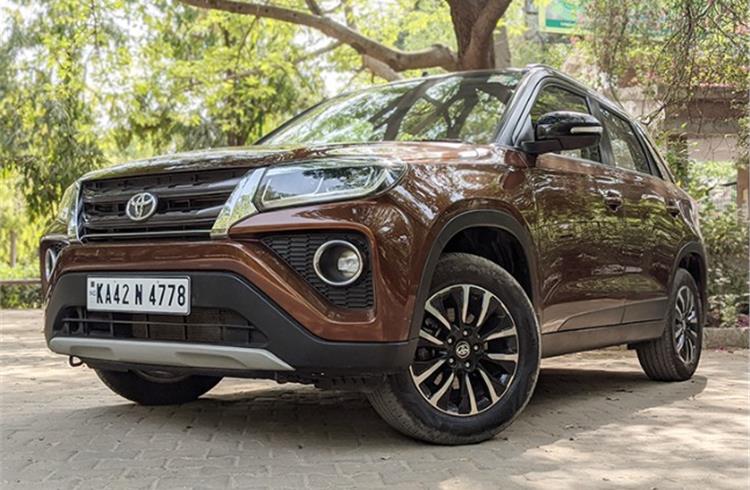 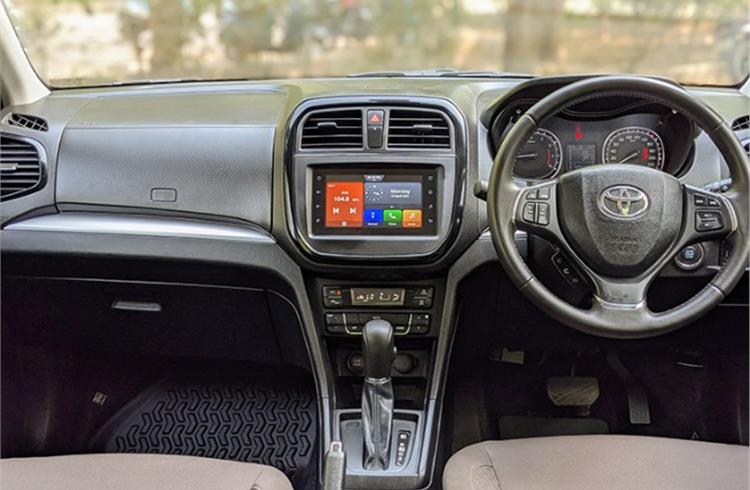 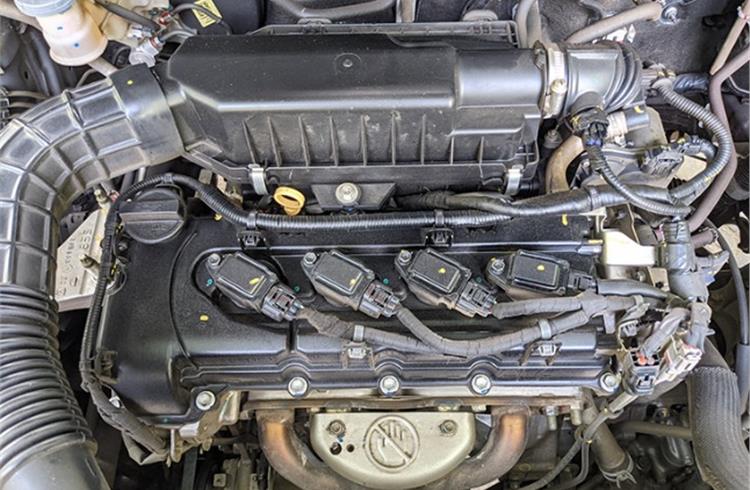 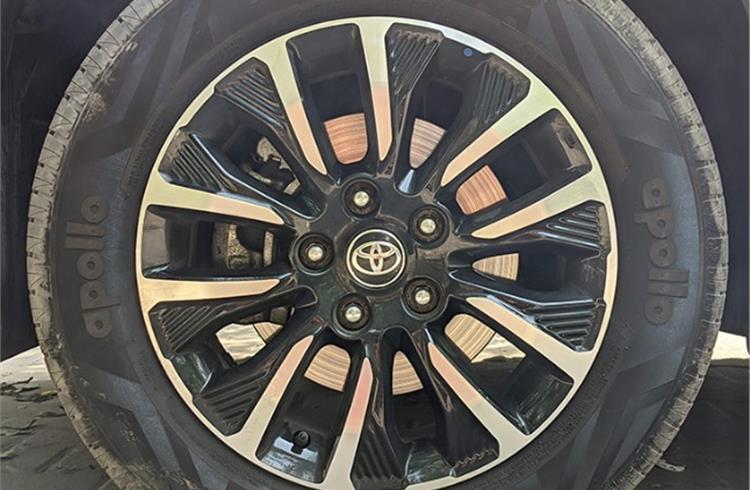 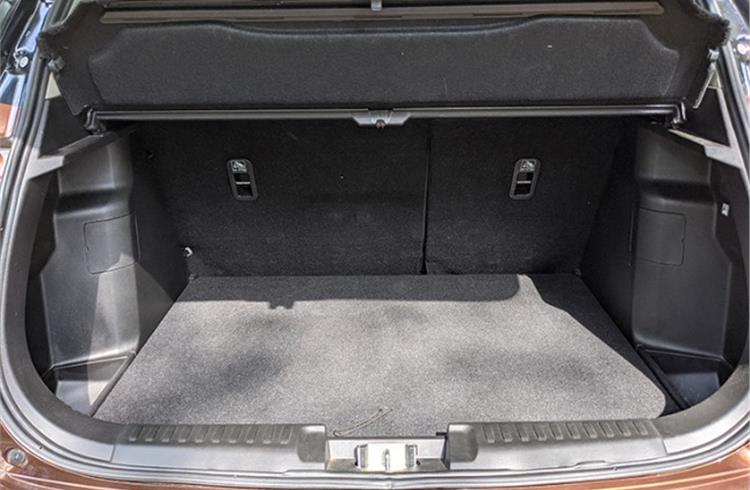 328-litre boot is well designed to accommodate weekend luggage of a small familly. 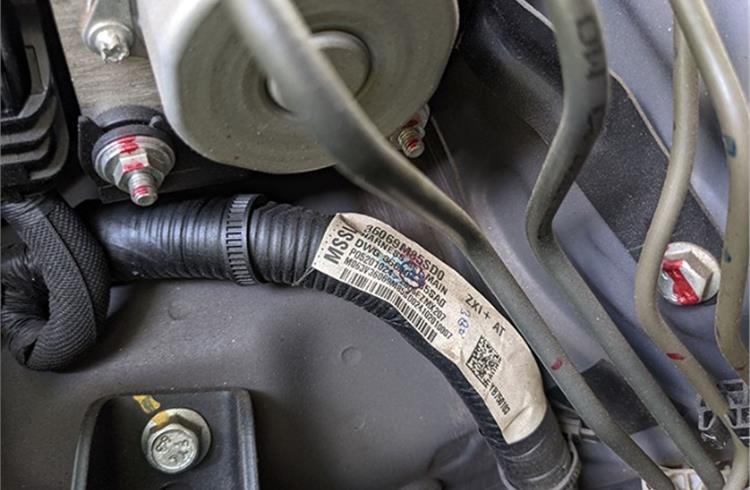 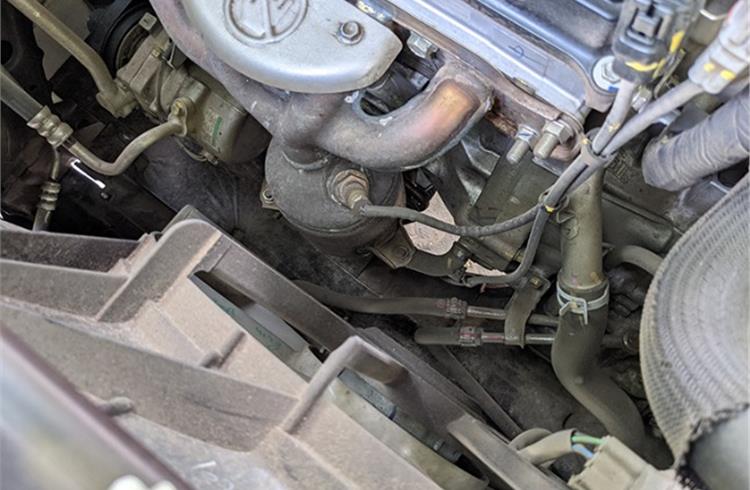 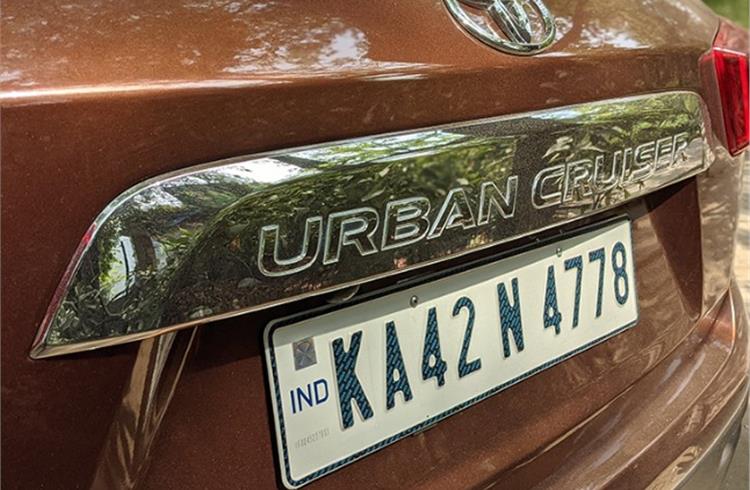 Japanese automaker Toyota, which is globally renowned for its SUVs, enjoys a similar reputation in the Indian market, thanks mainly to its butch Fortuner and multi-purpose Innova Crysta. However, unlike overseas markets where it has a strong presence in the sub-compact SUV segment with the RAV4 in Japan and the US, Avanza, Raize and Veloz in Indonesia, and the Daihatsu Sigra in the Indonesian market, it was absent from the segment in India which is one of the most volume oriented.

The sub-four-metre compact SUV segment in India forms 16.5 percent of the total UV category, which is on the upswing and has registered an 12 percent year-on-year growth (1,060,750 units) in FY2021 itself, despite being a slow year due to the pandemic. Products like the Maruti Suzuki Vitara Brezza, Ford EcoSport and more recently, Hyundai Venue and Kia Sonet, have made a noticeable impression in this booming market, which is also one of the most high-profit segments for carmakers, unlike the hatchback and sedan categories.

The crossover, based on the Maruti Suzuki Vitara Brezza, was launched in India in September last year, amidst a business environment where OEMs were trying to regain ground by banking upon the positivity brought by the festive season and also a slightly under-control Covid situation at the time.

The Toyota Urban Cruiser is the carmaker’s second product introduction from the Toyota-Suzuki alliance, after it first launched the Maruti Suzuki Baleno-based Glanza premium hatchback in June 2019. TKM has sold a total of 16,316 units of the Urban Cruiser between September 2020 and March 2021, with its UV market share being pegged at 7.07 percent in FY2021, with total UV sales of 66,268 units in the fiscal. 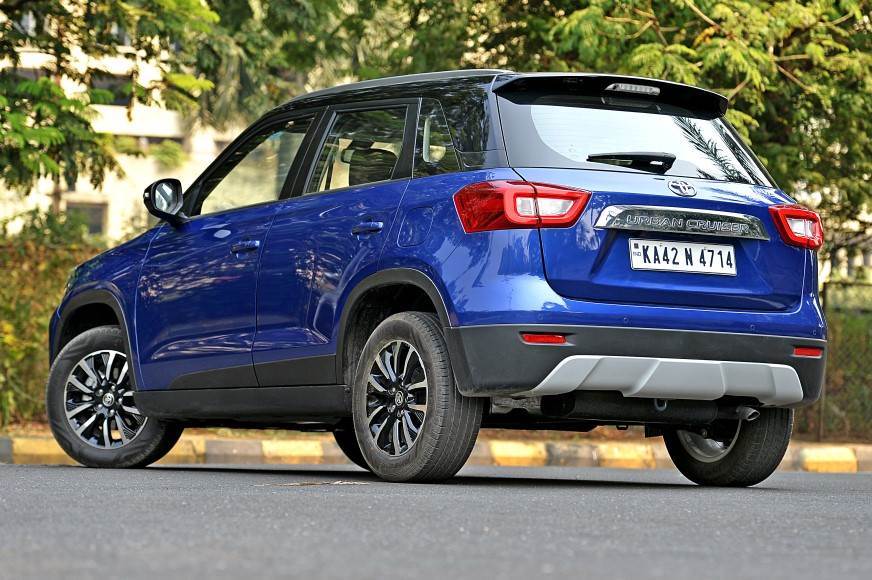 Bold looks
In terms of appearance, the Urban Cruiser is quite similar to the Vitara Brezza facelift that was introduced at the Auto Expo 2020, after being in the market for almost four years. While the crossover looks muscular in its proportions, the only differentiating facial element from the Maruti is the front grille that has a clear Toyota-family look to its design.

The grille flanked by dual-projector LED headlamps with integrated DRLs give a bold look upfront, while the side profile is identical to the Vitara Brezza. The rear end is slightly different too with a faux skid plate on the bumper, while the LED tail-lamps look the part. The unique rustic brown-and-black dual-tone paint combination along with 16-inch diamond-cut alloy wheels, give a youthful yet sophisticated vibe to this SUV that’s showing its age.

What's inside?
While the Vitara Brezza continues to offer an all-black cabin, the Urban Cruiser gets brown-shaded fabric upholstery that breaks the monotony of the all-black dashboard and floor panel. The plastic parts feel built-to-a-cost and there are some squeaks too, for instance, from the chunky inside door handle, but, there’s a sense of robustness and solidity with the way things are put together. 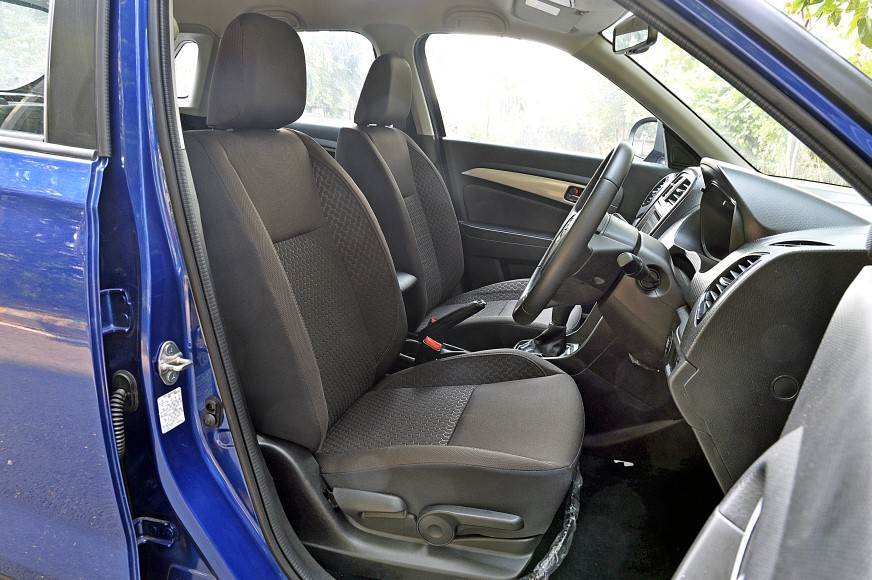 The cabin is wide and spacious with ample headroom and legroom both front and back. This is one of the USPs of the Urban Cruiser compared to its competitors, which struggle to offer reasonable space for a nuclear family.  The boot, at 328 litres, is well designed to suit most weekend needs of a small family as well.

The seats are supportive and well cushioned and the front adjustable armrest aids comfort to the driver and co-passenger’s elbows. The 7-inch SmartPlay Studio infotainment system is fluid to use but the sound output from the six-speaker setup could be largely improved. On the other hand, the automatic day-night IRVM, cruise control, keyless start, and auto-folding ORVMs are bits of added convenience. But, unlike most of its rivals, the Urban Cruiser lacks a sunroof and digital instrument cluster, which are both increasingly becoming popular customer attractions in cars of this category these days.

Engine and performance
After a dream run of almost four years, since its launch in March 2016, Maruti Suzuki had to give away the sole 1.3-litre diesel engine option in the Vitara Brezza and replace it with a 1.5-litre naturally-aspirated petrol motor last year with the onset of BS VI norms in April. While the diesel was known for its torque delivery, this large petrol motor boasts of a healthy mid-range. 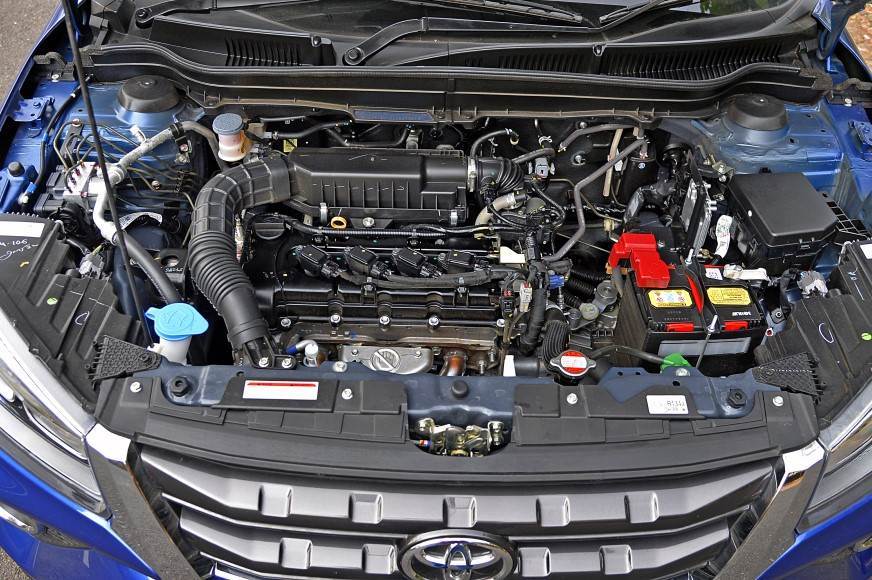 The 1.5-litre 103bhp, 138Nm petrol motor comes mated to a five-speed manual or a four-speed torque-convertor automatic transmission, which was the one with us on this test, and also comes with a mild-hybrid system, which is restricted only to the automatic trim.

The engine is absolutely refined at start-up, and given the torque convertor, initial pick-up is quite smooth as well. The lack of any turbocharger means that power delivery is linear and the crossover picks up pace in a rather progressive manner. Owners who want a daily commuter primarily for city driving would appreciate the way the engine and automatic gearbox have been married, with an easy spread of power until 80kph through a seamlessly-shifting transmission. Overall refinement and NVH levels inside the cabin are also reasonably impressive with most unwanted road and tyre noises remaining outside.

However, there would be a fair share of disappointment for someone looking for anything beyond in terms of outright performance from this setup. And, that is simply because in a world full of modern dual-clutch transmissions, and 6-speed torque convertor units, this four-speed gearbox feels tremendously outdated and outclassed compared to its rivals. It’s par-for-the-course out on open highways and is best suited for city driving, where the mid-hybrid system with  its standalone 12V li-ion battery pack and integrated starter generator (ISG), offer power assist during acceleration, as well as save fuel by switching off the engine when it is left to idle at signals.

Ride, handling and safety
The Toyota Urban Cruiser offers a mature ride and handling package with the crossover remaining unfazed by bad roads, yet the handling being enjoyable enough to take it around corners reasonably fast. The crossover comes with a rather basic safety kit including standard dual airbags, Isofix,

ABS with EBD and hill-hold assist in the automatic variants. While its competitors offer up to seven airbags (Mahindra XUV300) and more active safety features like ESC (Ford EcoSport, Kia Sonet), the Urban Cruiser comes with the backing of a four-start Global NCAP crash-test rating that was awarded to the Vitara Brezza it is based upon.

Moreover, the high ground clearance offers a sense of promise of being able to go to over most unbeaten paths without a second thought.

This promise is further bolstered by Toyota, wherein the company offers a 3-year, 100,000km standard warranty package on the Urban Cruiser, which is a step up compared to Vitara Brezza’s 2-year, 40,000km package. Moreover, the unique option of either sixth or seventh year extended warranty coverage is a strong convincing factor that makes he Urban Cruiser a sensible purchase for consumers scouting for a practical city-friendly compact SUV for the family.