Instead of conventional speakers, the system turns the car’s internal trim panels into speaker surfaces. 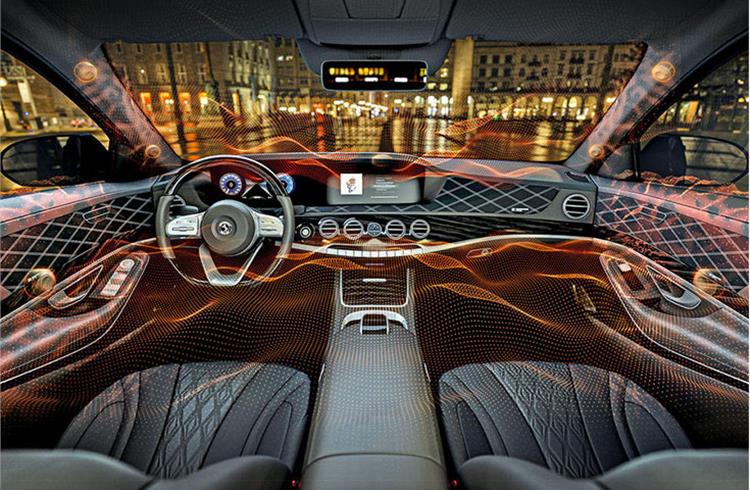 Most premium car makers have used some sort of active sound technology to get rid of unwanted resonance, either by sending noise-cancelling signals through speakers or by using active engine mounts to quell vibrations – especially on models using cylinder deactivation technology.

At the Consumer Electronics Show, Continental AG showed off a Speakerless Immersive Sound system it has developed in collaboration with premium sound specialist Sennheiser. While not a sound cancellation system, ‘Ac2ated’, as it’s called, takes an unusual approach to broadcasting audio sound inside the cabin of a car.

Instead of conventional speakers, the system turns the car’s internal trim panels into speaker surfaces. Continental likens the tech to the way the wooden body of a musical string instrument, such as a violin or cello, acts as a resonance chamber to project sound as it’s played. In this case, selected surface areas within the car vibrate like the diaphragm of a speaker in order to produce the sound.

Small actuators, attached to the back of the panels and out of sight, excite the surfaces exposed to the cabin to generate the sound. The frequency ranges usually handled by specific sizes and types of speaker are produced by vibrating different-sized surfaces, such as the A-pillar trim, door trim, roof lining and rear parcel shelf.

Sennheiser’s Ambeo 3D audio technology, which produces immersive sound, has been integrated with the Ac2ated technology. On a strictly practical level, using activated surfaces saves space and weight. Continental says a conventional audio system can weigh as much as 40kg, but by using existing surfaces it can reduce that by between 75% and 90%.

Weight reduction in cars is crucial in order to reduce fuel consumption or increase the range of an EV, and it comes at a cost. Aluminium, carbonfibre, magnesium and lightweight steels all cost more. Being able to slice over 30kg from one of the features most customers want and ending up with a more desirable product at the same time is a win-win for manufacturers.

Perhaps even more radical is Harman’s Individual Sound Zones (ISZ) system, which allows each occupant of the car to listen to their own audio without wearing headphones. 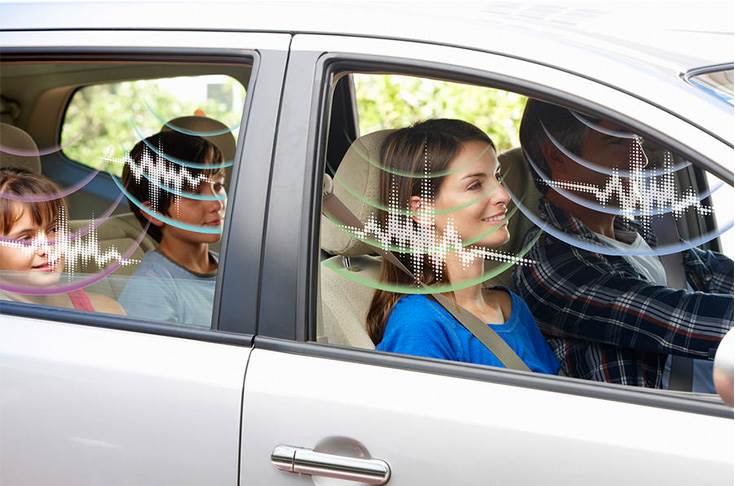 Two small micro-speakers, mounted in each headrest, interact with sound waves from standard audio speakers to modify what each person hears. As well as that, Electro Dynamic Planar Loudspeakers (EDPL), one in the headlining above each passenger, project directional sound downwards, like a spotlight, so only the individual can hear it.

The system lets occupants listen to their own audio without hearing the others, and only the driver has to listen to driving-related commands, such as navigation instructions or other alerts from the car.

The system also enables passengers to take a phone call and patch it through to someone else in the car. Even if two people are listening to the same audio channel, they can set the volume individually and even turn it right down if they want.

Spotlight on sound
Back in 2000, DaimlerChrysler developed the Audio Spotlight concept with its inventor, Dr F Joseph Pompei, then a student at Massachusetts Institute of Technology. Speakers in the headlining above each occupant, made up of ultrasonic transducers similar to parking sensors, project a beam of audible sound to the person below. Although not yet used in cars, thousands of Audio Spotlight systems have been sold by Pompei’s company, Holosonics, for various static applications.