Carmaker bullish on its BS VI diesel engine technology and is set to introduce new turbo-petrol option as well. 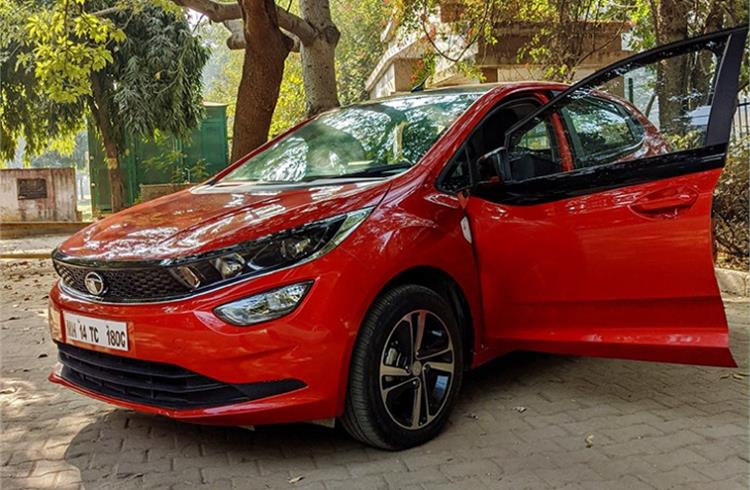 The Tata Altroz looks particularly striking from the front with its muscular hood and 90-degree door-opening aperture. 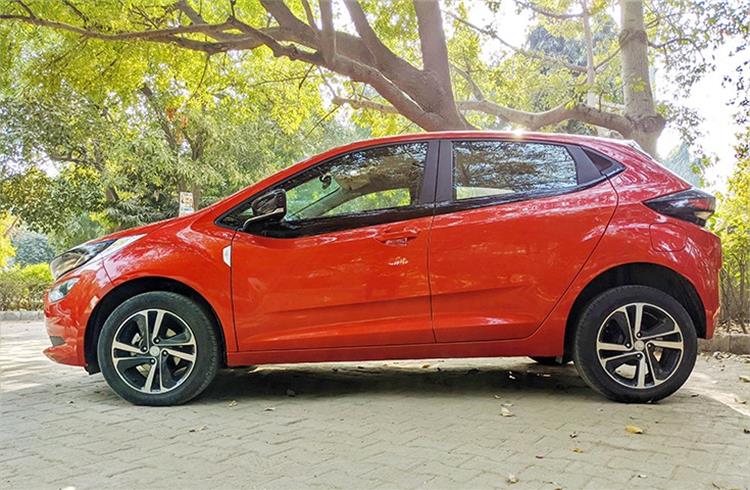 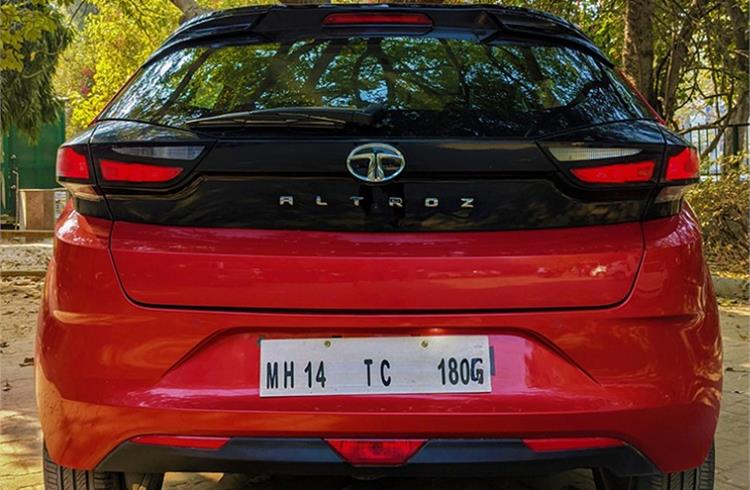 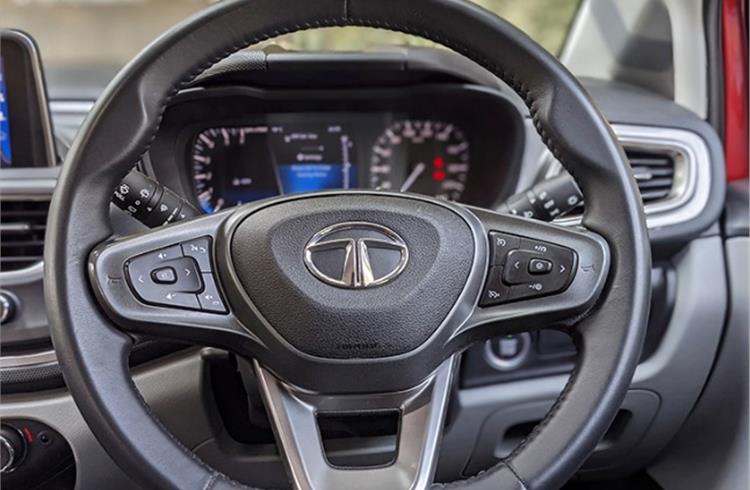 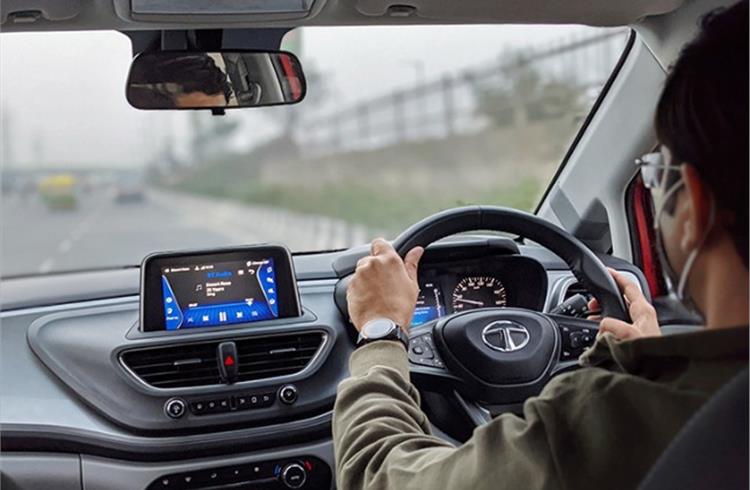 The 1.5-litre diesel-engined Altroz is fairly enjoyable within the city with a shove of torque at 1,800rpm. 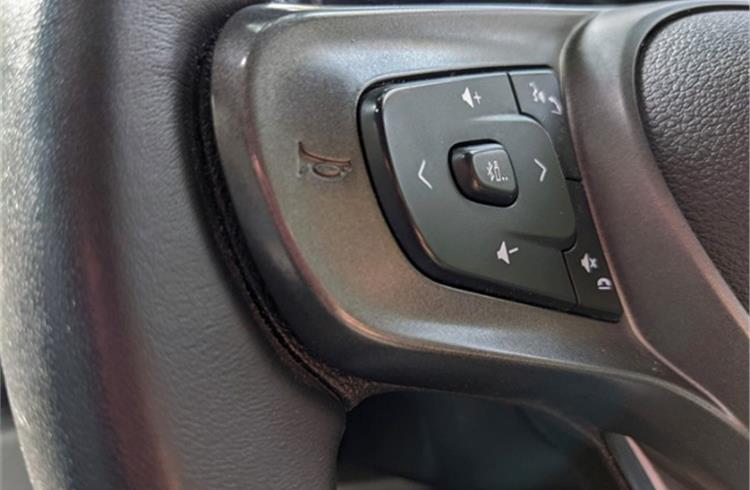 Steering-mounted buttons lack tactile feel and there is a lag to response. 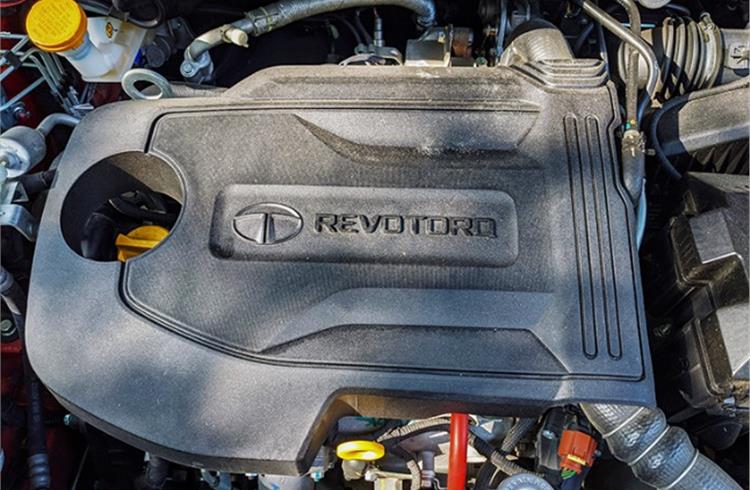 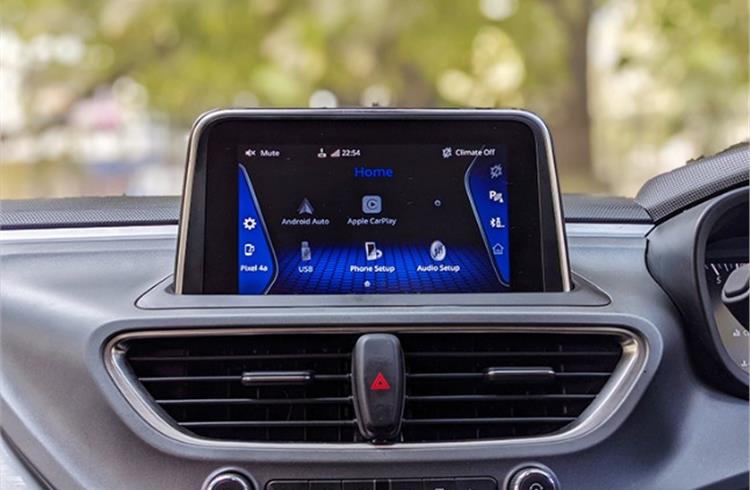 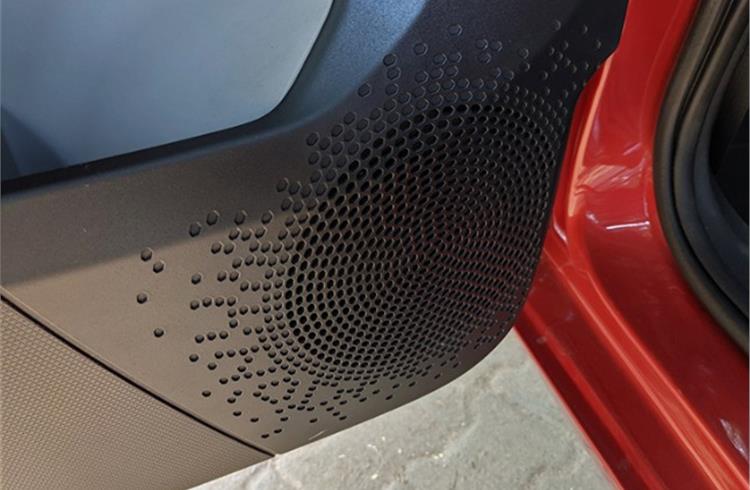 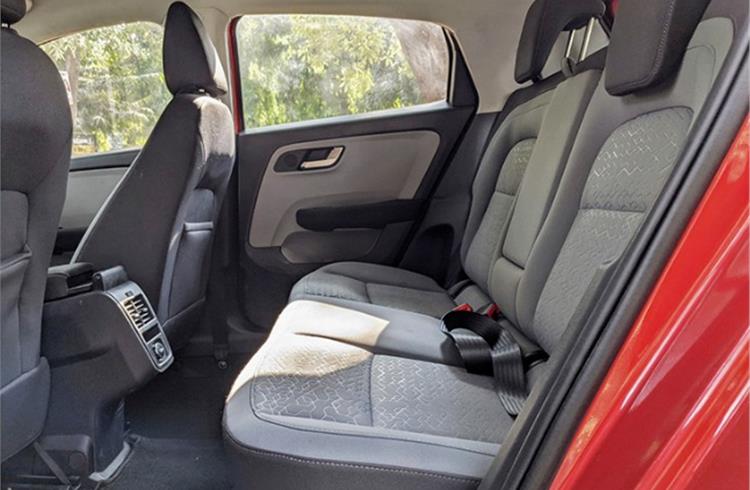 Tata Motors is on a roll. The company has beaten down all market uncertainties brought by the pandemic last year with an astonishing performance of its passenger vehicle business, selling more cars than ever before.

All this comes on the back of a refreshed product line which is being touted as the ‘New Forever’ range, courtesy the appealing styling infused by its team of global designers, high crash-safety rating and a powertrain strategy that still reinforces diesel in a world slowly shying away from the conjectured ‘dirty’ fuel.

The Tata Nexon, flagship Harrier and the youngest family member – the Tata Altroz premium hatchback – are seen to be still drawing buyers and their inclination for potent diesel engines, which have been made to conform to the stringent BS VI emission regulations in place.

Premium power
Launched in January 2020, the Tata Altroz has been the company’s attempt to enter the voluminous premium hatchback segment in India, which is ruled by Maruti’s Baleno and Hyundai’s i20 that hold the lion’s share of the midsized hatchback space.

While initial sales got hampered due to the outbreak of Covid-19, followed by precautionary lockdowns, they started to recover around the festive season, with the Altroz finally raking in numbers and emerging the best-selling Tata Motors car in November 2020 with 6,260 units going home to buyers and doing even better in October with 6,730 units, but remaining slightly behind the Nexon which had registered 6,888 units in that month of Dussehra.

So, what is really going in favour of this hatchback that has a rather tough competition to handle?

Style matters
For one, the design of the Altroz makes it a head-turner. The car is built on Tata Motors’ ALFA (Agile, Light, Flexible, Advanced) platform and has generous proportions to flaunt its eye-catching ‘Impact 2.0’ family design language.

The front is particularly imposing with a sheepishly grinning face that has enough character brought especially by the muscular lines on the hood and sleek halogen projector headlamps that flank the honeycomb grille but are also almost concealed under the piano-black eyelashes. There are two bean-shaped foglamp housings that also double up as the LED DRL inserts and sit rather high, just below the headlamps. A massive expanse of emptiness on the front bumper ends with a wide air dam towards its lower half.

Move towards the side and there is prominent flare on the fenders which also uniquely house the transparent side-turn indicators instead of the ORVMs. The doors give way to a rising beltline that runs through the rear door into the wraparound tail-lamps while also displacing the rear door handle into the C-pillar. A strong highlight of the design is the chunky piano-black applique at the base of the side windows, which also add to the style with their slim borders. 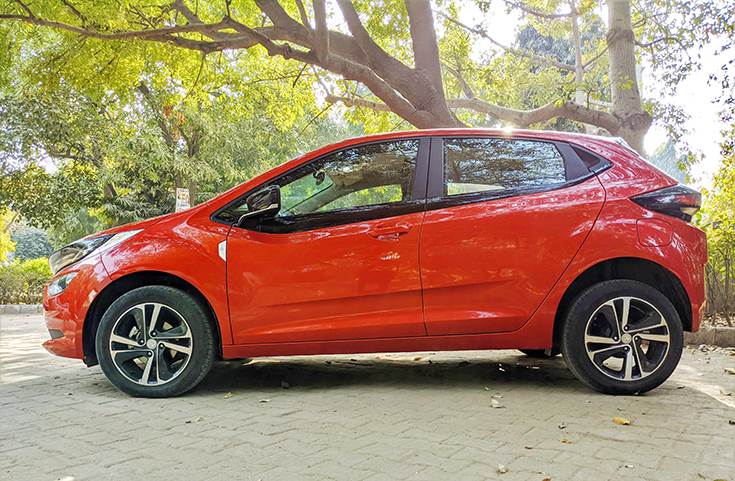 There is diamond-cut finishing on the 16-inch alloy wheels, and appliques of chrome at the corners of the headlamps as well as stub of the piano-black wing mirrors on the Red-Black dual-tone combo test car with us. The rear is where the design drama intensifies a bit too much and will draw subjective opinion. The large, split tail-lamps are blackened to merge with the giant piano-black section in the middle of the boot that houses the 3D ‘Tata’ emblem in the centre as well as a rear camera and Altroz badge that are placed just below.

When viewed from the side, the integrated rear spoiler becomes prominent while the tail-gate section seems to have a distinct kink that might not appeal to some buyers. Ultimately, the rear bumper culminates with a fog lamp in the centre and reflectors on its either side.

Upmarket ambience
Tata Motors has put in a lot of effort in projecting a premium feeling inside the Altroz’s cabin. The dashboard is uniquely designed with a popped-out 7-inch touch-screen infotainment in the centre and a large brushed-aluminium insert running almost across the length to bring contrast to the black and grey combination. A nice touch to the overall cabin ambience is lent by the blue LED ring that encircles the central display and glows along with other lights in the footwell and centre console to give a soothing visual aura at night. 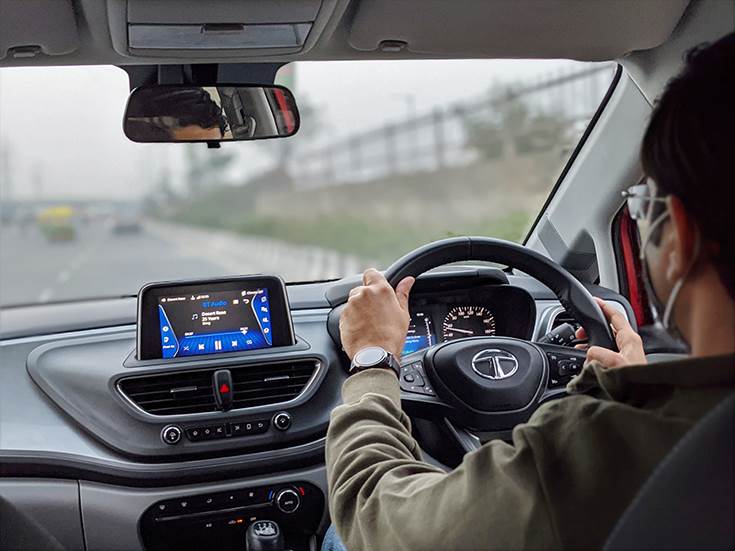 The upholstery is also in a light shade of grey while the roof liner has been done in subtle beige to offer a sense of airiness. Being a wide car, the Altroz offers ample room for a family of five with sufficient shoulder and legroom both front and back.

The seats are nicely contoured and from a point of functionality, there is enough kit on offer too;rear AC vents, rear armrest, height-adjustable seat beltsas well as fabric inserts on the door pads are there to offer comfort and convenience inside the car. Tata has also equipped the infotainment with an entertaining six-speaker Harman sound setup as well.

However, the quality of materials and the fit and finish is not the best in the segment and falls way behind the likes of the Volkswagen Polo and especially Hyundai i20. The switchgear lacks the tactile feel and the driver’s binnacle is marred by a digital-analogue instrument cluster that bears an outdated design. The horn pad extensions on the steering wheel, although aid to its usability, make using the other buttons such as cruise control a sad experience.

Furthermore, the large glovebox is not the most convenient to open and close shut, and the door pads also lack space to accommodate large-sized bottles.

Maintaining balance
One can easily find a good driving position in the Altroz with its well-engineered ergonomics making everything fall into place easily. The doors open at a wide 90-degree angle to aid ingress and egress, especially for the elderly. The large driver’s footwell is accommodating and there is space to also comfortably rest the left elbow on the adjustable front armrest.

The diesel Tata Altroz gets a 1.5-litre, four-cylinder, turbocharged motor that develops 89bhp of power and 200Nm of peak torque. The engine comes mated to a five-speed gearbox with a light and progressive clutch. 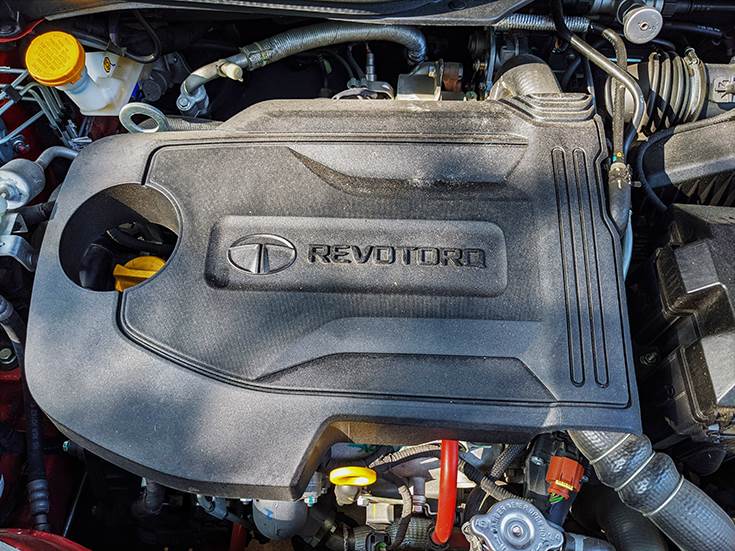 Fire it up and there is noticeable clatter inside the cabin, even though the vibrations on the gear lever as well as pedals are well curtailed. The Altroz diesel is easy to move off the line and with a smaller turbocharger compared to the Nexon, it starts offering adequate torque right from 1,200rpm itself, which then transforms into a strong shove around 1,800rpm, making the snazzy hatchback effortless and enjoyable to drive in city traffic as well. The engine is almost always in the meat of its powerband in the default ‘City’ driving mode, and an added bonus is the consistently good 21kpl fuel economy being displayed by the MID during the course of our drive. The ‘Eco’ mode restricts throttle response considerably and is good for stop-and-go traffic.

The initial gear ratios are extremely small which can catch one out while starting off from a signal and the shifts are notchy too, despite the gearshift gates being well defined. The brakes, on the other hand, offer a strong bite.

In terms of ride and handling, Tata has lived up to its reputation from the Safari and Hexa, and offered the Altroz with a balance that is unlike anything in this segment. The car feels planted at high speeds and around fast corners, offering plentiful feedback on the steering wheel. The ride quality is the talking point, especially for family buyers, with a suspension setup that demolishes most bumps and potholes for good riddance.

The Altroz is rated five stars by the Global NCAP and comes with dual airbags, ABS with EBD and cornering stability control as standard, making it the safest hatchback on sale in the Indian market at the moment.

But, with the share of diesel sales plummeting even within the Tata Motors stable and arch rivals offering much superior petrol engines compared to its naturally-aspirated, 85bhp three-cylinder, 1.2-litre motor, including those equipped with automatic transmissions as well, it would be a tough call for someone to put their money down on this diesel without the necessity of a fuel-efficient workhorse.

Cities like New Delhi are already discouraging diesel cars with their reduced lifespan on the roads as well as authorities undertaking huge clampdown activities on older diesel vehicles in the national capital. Therefore, while Tata Motors has a strong offing in the Altroz diesel against the petrol-only Maruti Baleno and enjoys a price advantage of over Rs 120,000 over the base Hyundai i20 diesel, it would only be able to enhance its attack when it introduces the 1.2-litre turbo-petrol and dual-clutch gearbox-equipped Altroz option on January 13. The fight is only set to grow fiercer in the segment.