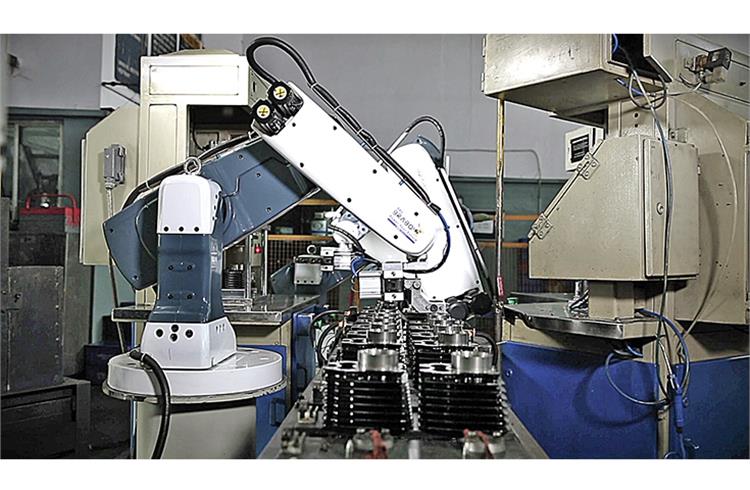 The challenge of skills is looming large on the Indian automotive sector which currently employs over 19 million people, both directly and indirectly. This includes manufacturing in OEM, auto components, raw material factories, automobile dealers, service centres and other enabling sectors. While captains of industry and apex industry bodies SIAM and ACMA are already seized of the enormity of the challenge, a recent survey has reiterated the concern. As per the ‘Future of Jobs in India: A 2022 perspective’ report by EY and commissioned by FICCI and NASSCOM, by the year 2022, 50 to 55 percent of Indian workforce in the automotive sector would be deployed in jobs that have radically changed skill sets. By 2022, the industry will need around 15 million skilled workers. Among component suppliers, 70 percent of whom constitute SMEs, a majority of the workforce is employed in Tier 3 vendors and raw material manufacturing companies. As is known, the bulk of the workforce graduating from scores of engineering colleges across India is not immediately employable and need considerable on-the-job training.

While 70 percent of the surveyed industry executives in the EY report recognised the strategic importance of smart connected products, 55 percent stated big data, as well as cloud computing as the key technology drivers in the automotive industry. Robotics and automation is seen as one of the most impactful technologies for the Indian automotive industry by 50 percent of the respondents. The survey attests to the deployment of robots on the shopfloor, making its way through die-casting and welding. Robots have enabled almost 70 percent to 100 percent automation in weld shops, press shops, cast shops and paint shops. It further expects that paint and welding shops to be completely automated by 2020, while the use of robots in assembly lines is limited to 20 percent across companies.

The report states that robots further penetrating into assembly operations will enable a higher degree of automation and lower costs for manufacturers. And that’s just where a company like the Pune-based TAL Manufacturing Solutions comes into play.

TAL Manufacturing solutions  (TAL) was formed in 2000, by merging two mother divisions of Tata Motors – Machine Tools and Growth – which designed and built the machines, equipment and automation requirements of the vehicle manufacturer. These capabilities are now being leveraged to provide cost effective automation solutions, including its indigenously developed five- and six-axis articulated robots to the industry.

The Pune-based subsidiary of  Tata Motors recently launched its new six-axis Brabo TR06-6 industrial robot, priced between Rs 750,000-Rs 800,000, and aimed at catering to the robotic requirements of the automotive, electronics, pharmaceutical and the FMCG sectors. The robot, which is an upgrade over its first product launched in April 2017 – the Brabo five-axis – offers additional linear as well as rotational motion along all three axis, thus being a 3+3 dimensional robot with a 6kg payload capacity.

Designed and developed from the perspective of being easy to install and operate, the Brabo TR06-6 holds four patents to its design and can perform specialised and complex fielding applications like MIG welding. The company sees over 50 percent of the need for robotisation coming in from the weld shop in the industrial segment, and will offer an additional attachment to integrate various welding torches along with the robot.

TAL is targeting SMEs and MSMEs as its key buyers as it foresees demand coming in for automation from Tier 1 and Tier 2 automotive component suppliers.

The company feels that while industrial automation is still at a very nascent stage in India at the moment, it is doing its bit to make smaller companies quickly embrace robotisation by offering a cost-efficient solution. TAL claims the return on investment is between 15-20 months, depending upon the volumes and nature of work. 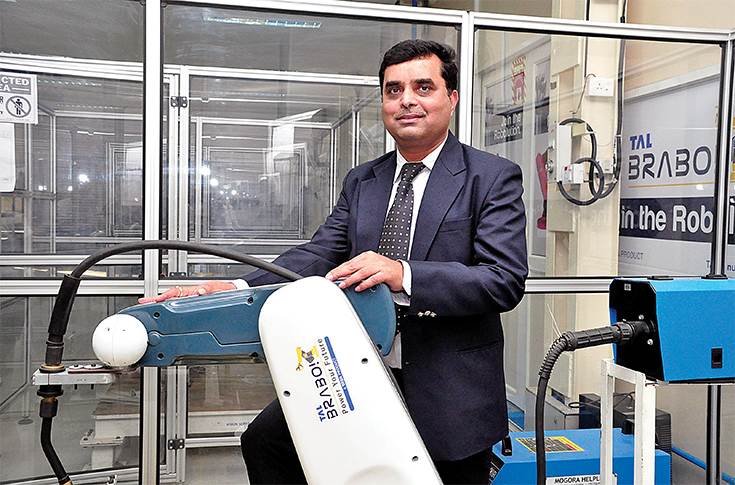 Speaking to Autocar Professional, Amit Bhingurde, chief operations officer – Robotics, TAL Manufacturing Solutions (pictured above), says, “At present the robotisation market in India stands at roughly 6,000 units, according to the International Federation of Robotics and is pegged to grow to 20,000 units over the next five years.”

“While OEMs are already at a very high level of automation, which stands between 60-70 percent of the operational work, it is the Tier 1, 2 and Tier 3 vendors which are lagging behind at around 20-25 percent and have a long way to go. This also requires a lot of collective efforts by the industry.”

“It is very important for these smaller players to adopt robotisation and automation in their processes, in order for us to see India moving in the direction of industrial automation or Industry 4.0,” adds Bhingurde.

TAL Manufacturing Solutions operates out of the Tata Motors’ campus in Chinchwad, in Pune. While the company began operations in CY2000, making machine tools and critical components for Tata Motors’ core CV business, it ventured into the robotics arena only in CY2014.

After unveiling its first prototype in 2015 at the Make-in-India show in Mumbai, the company was able to bring the 10kg payload Brabo TR10-5 to the market in 2017. The company has received over 250 orders till now and is optimistic about getting repeat orders from its customers.

While the automotive sector contributes to over 55 percent of its revenues, which stood at Rs 80 crore in FY2018 including sales, automation solutions and aftersales, TAL has supplied two robots to parent Tata Motors, five to Bosch and 15 to Mahindra & Mahindra for operations like sealant application and machine tending of small components, which remains a major operational application for its robots across two-wheeler and four-wheeler component manufacturers. It has also supplied robots to educational institutions including BITS Pilani.

“The western part of India comes on top when it comes to the level of automation, given the large number of automotive players in the region. But with a number of two-wheeler players and Maruti Suzuki India also being situated in the northern part of the country, the North is also picking up very quickly,” says Bhingurde.

The company is eyeing smart growth in the industrial robotisation space in India in the coming years and, as a result, wants to offer complete turnkey solutions by optimising the assembly lines of component manufacturers. It is planning to introduce two more products – one by November 2018 and the other by June 2019 – with servo motors for faster robotic arm movement and with payload capacities of 12kg and 20kg respectively. Four other robots are under development at the company’s R&D centre, which houses 120 engineers. These models will also have an increased level of Artificial Intelligence (AI) and Internet of Things (IoT) capabilities.

TAL Manufacturing Solutions has till now invested  Rs 50 crore into its robotics business since 2014. It plans to invest an additional Rs 100 crore over the next five years, which would also augment its manufacturing capacity to 10,000 units and help in achieving overall revenues of Rs 1,000 crore.

“Industrial robots are not replacing jobs but are aiding humans by taking over the fatigue-laden and mundane jobs, giving them a chance to focus on more intellectual roles. For instance, with the robotics industry coming up, robot designers and robot technicians are just some of the opportunities which will spawn in the future,” remarks Bhingurde.

“So, the overall job spectrum, as well as the skill sets, are changing. Artificial intelligence and IoT skills are slowly and gradually becoming a necessity; also the industry and even the curriculum in colleges are maturing, in a manner akin to western markets. The nature of jobs is going to change and there needs to be reskilling of manpower,” concludes Bhingurde.