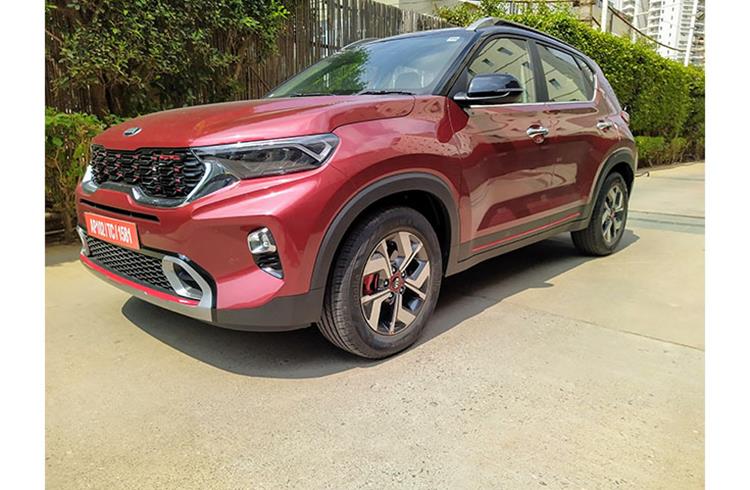 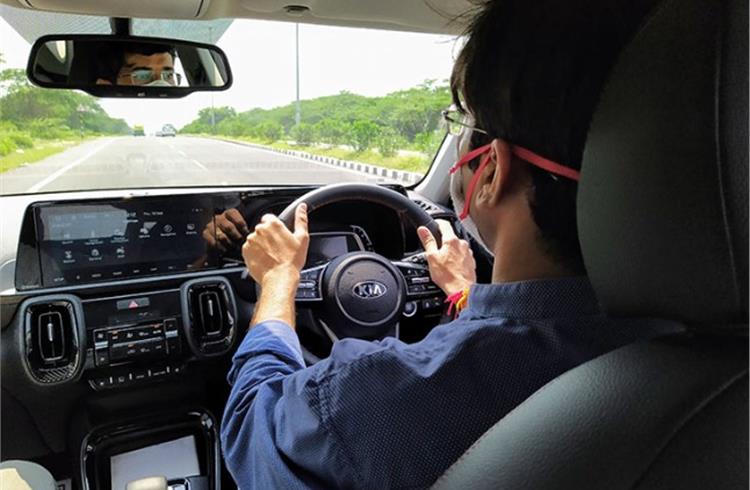 A premium ambience with rich textures, high-quality materials and plentiful modern-day features are the top highlights of the Sonet's cabin. 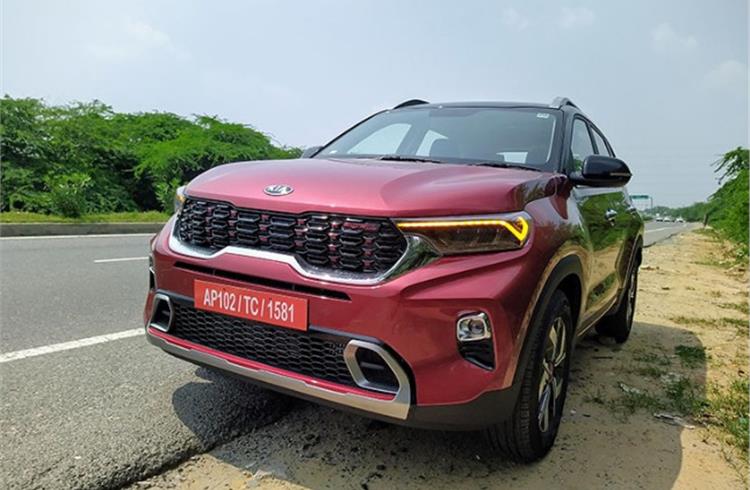 The suspension delivers a mature and settled ride quality and the Sonet can negotiate bad patches at both city and highway speeds without many jerks. 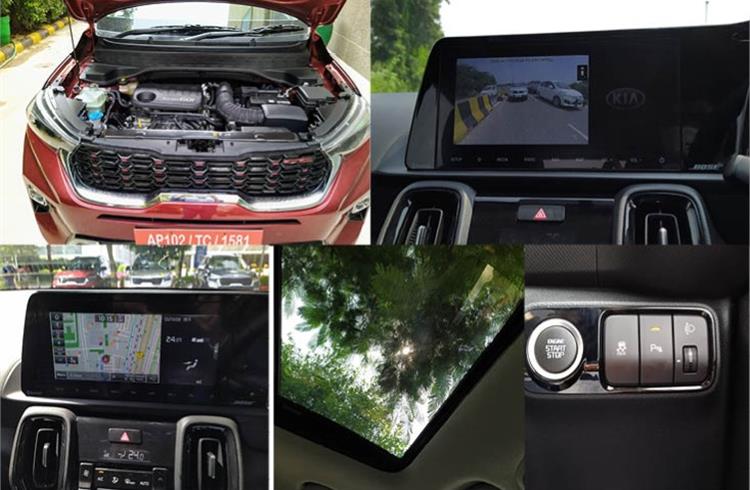 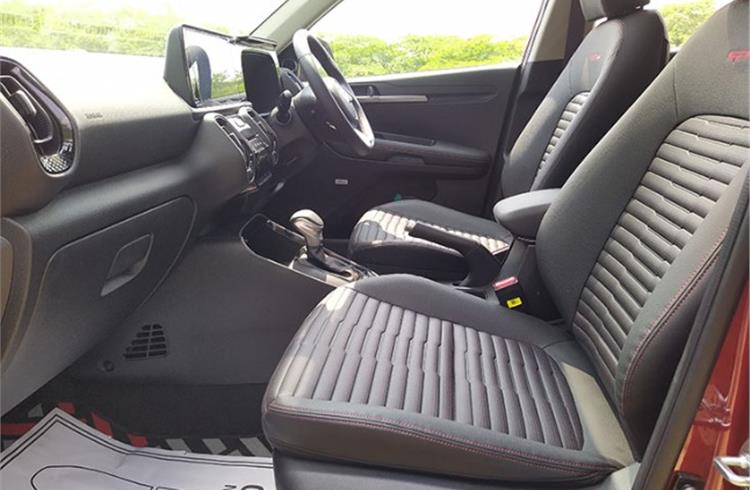 Utility vehicles (UVs) are spearheading the revival in the Indian passenger vehicle market. Growth is on the upswing and July (14%) and August (15%) were happy months for the UV segment. Within the UV category, compact SUVs are big news and Kia is set to liven things even more with its new Sonet adding to the firepower in its stable in the form of the Seltos SUV, which has sold 98,711 units between August 2019 and July 2020, and the flagship Carnival MPV.

Kia Motors Corporation (KMC) is hugely bullish on the new model. According to Ho Sung Su, president and CEO, KMC, “With the Sonet, we want to become the brand of choice in India.” KMC has targeted sales of 100,000 units in India as well as another 50,000 units of exports of the made-in-India Sonet from Kia Motors India’s plant in Anantapur, Andhra Pradesh, in the first year of launch itself. While these projections may look ambitious, Kia Motors India seems to be on the right track with the dynamic crossover clocking a record 6,523 bookings on August 20, when bookings opened.

Local inspiration — glocal development
The Sonet has been jointly developed by Kia’s global R&D HQ in South Korea and Kia Motors India’s local R&D team. According to Karim Habib, head of Kia Global Design, “The exterior design of the Sonet was inspired by the baby elephant and it truly emulates the strength and attractiveness of the animal. Kia’s signature ‘tiger nose grille’ was given a step-well treatment influenced by traditional Indian architectural methodology.”
On the outside, the crossover boasts muscular design traits such as an upright bonnet, rising window line and all-around body cladding that, along with the wide 215-section tyres, give a butch and athletic stance. The gloss-black C-pillar treatment is an attempt to give a wraparound treatment to the rear windscreen but its poor execution give away the Sonet's sub-four-metre design restrictions and is the only letdown in an otherwise sporty design.

Distinctive accentuating elements include a pair of LED headlamps upfront with Kia’s signature heartbeat DRLs, 16-inch diamond-cut alloy wheels, gloss-black roof with a sunroof and a pair of LED tail-lamps conjoined by a sleek horizontal strip of reflectors with the rearview camera neatly integrated underneath and Kia logo placed just below.

Highly connected, premium cabin
The Sonet offers a lively cabin experience with an amalgamation of textures, shapes and buttons and gadgets aplenty. The layered vertical AC vents, leather-wrapped flat-bottom steering wheel, fully digital instrument cluster with a Visteon-sourced 4.2-inch coloured MID, brushed aluminium pedals and an all-black upholstery theme with red embellishments in the GT-Line trims (Tech-Line variants get black-and-beige combination) are bound to appeal to  enthusiasts.
The seats are nicely bolstered and the front ones also offer segment-first built-in ventilation to provide comfort in hot Indian conditions. The rear bench, however, is only adequate in terms of space, and also misses out on the split-fold functionality to aid convenience and practicality.
Plastic quality, and fit-and-finish exude premiumness, which is further amplified by the 10.25-inch touchscreen infotainment system sitting right up the centre of the dashboard and paired to a 7-speaker Bose sound system. The infotainment system also supports up to 57 connectivity features under Kia’s UVO Connect app platform. The cabin also gets an air purifier with particulate filter integrated into the front armrest, wireless phone charger and sound-mood lighting.
In terms of safety, while the Sonet has not yet received a crash test rating, the SUV gets six airbags, ABS with EBD, ESC, hill-hold assist, front and rear parking sensors, ISOFIX child seat anchors and a tyre pressure monitoring system.

Driving the Sonet 1.0 TGDi Automatic
Where Kia has a distinct advantage over its rivals including Maruti Suzuki, is in the powertrain-drivetrain department with its plethora of engine-transmission combinations designed to appeal to literally every type of buyer.
The 82bhp 1.2-litre four-cylinder petrol comes mated to a 5-speed manual gearbox, 1.5-litre four-cylinder diesel gets a 6-speed MT (100bhp) or a 6-speed AT (113bhp) option and, last but not the least, the 118bhp 1.0-litre three-cylinder turbocharged petrol or as it is christened turbocharged gasoline direct injection (TGDi) in Kia-speak, comes mated to a 6-speed iMT clutchless manual transmission or the sportier 7-speed dual-clutch transmission (DCT) that we tested.
The engine switches on to a smooth idle with good sound insulation inside the cabin even with the lack of a cladding underneath the bonnet. Slot the gear lever into D and the Sonet rolls off with ease. The engine gets bothered with turbo lag below the 2,200rpm mark, after which there is a noticeable gush of torque and the SUV offers brisk performance with the quick-shifting DCT adding to the fun-to-drive element. The mid-range is where the 1.0-litre engine shines and has plentiful punch until the 5,000rpm mark.
The unique feature on the 1.0-litre TGDi DCT variant is the availability of the driving modes — Eco, Normal and Sport — each altering the fuel-injection maps on the ECU as well as gearbox characteristics. Eco is tuned to retrieve the best fuel efficiency as the transmission is eager to upshift at the first opportunity and also remains in a higher gear even when the car is slowed down considerably. ‘Sport’ mode brings about a noticeable shift in gearbox behaviour with quick downshifting as well as holding onto a gear for long and upshifting only around 4,100rpm to offer maximum performance. ‘Normal’ mode is the best of both worlds, providing adequate power and torque for day-to-day driving scenarios and is also the default driving mode.
The brakes with ABS, EBD and brake assist are sharp and nose-dive under sharp braking is controlled quite well too. For an SUV that stands 205mm above the ground, the Sonet offers decent handling with a steering that’s quite well calibrated and offers good feedback. However, it is no corner-carver, and gets affected by some bodyroll in corners, but is safeguarded by the electronic stability control (ESC) system on board.
The suspension delivers a mature and settled ride quality and the Sonet can negotiate bad patches at both city and highway speeds without many jerks. It also offers three traction settings — snow, sand and mud — but, in our test drive on smooth roads and highways around Gurgaon, we couldn’t test either of the options and would restrict our judgement. However, given that most buyers would predominantly use the Sonet in urban conditions, the traction modes would only be activated on weekend getaways and adventure trips taken outside the city limits.
In terms of comfort and convenience, the cooled front seats, push-button engine start-stop, auto-folding rear-view mirrors as well as the front parking sensors are extremely functional in giving a stress-free driving experience inside urban confines. One can also activate the rearview camera while on the go by pressing the ‘view’ button under the touchscreen panel and prevent the Sonet from getting rear-ended in dense traffic. Also, the cabin particulate filter monitors the environment inside the car and gives a readout of the real-time AQI on the infotainment screen or on the panel above the rear AC vents.
To sum up, the Sonet has robust all-round credentials and will cast a positive first impression on the prospective buyer with its reasonable space, comfort and a host of features and powertrain options. Now, the ball is in Kia’s court. Will it adopt an aggressive pricing strategy to gravitate a lot of young buyers from cars like its sibling Hyundai Venue, segment stalwart Vitara Brezza as well as the upcoming Toyota Urban Cruiser?