Sandhar Technologies is fast expanding into the booming space of auto electronics in the industry. 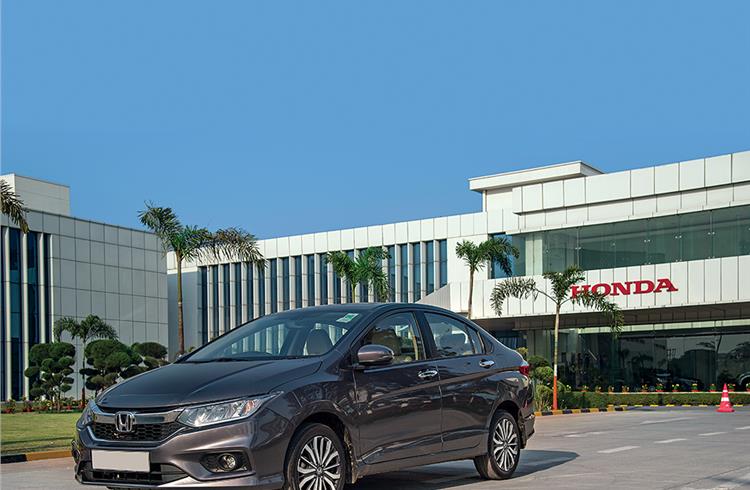 Tier 1 supplier Sandhar Technologies, which has a varied automotive components portfolio, right from door locks, handles and mirrors, to aluminium die-cast components such as wheel hubs, spindles and sprockets is now fast expanding into the booming space of auto electronics in the industry. Its new areas of operation are agnostic to the impending disruptions in the mobility world.

The company began operations in 1987 as a sheet metal components supplier to Hero Honda, the largest two-wheeler manufacturing JV in the country at the time, until the two majors parted ways in December 2010. Sandhar had struck a technical collaboration with Japan’s Honda Lock, a key supplier of proprietary locking systems to Honda Motor Company and its subsidiaries, as well as to other major automotive OEMs in Japan including Kawasaki, Suzuki and Isuzu. 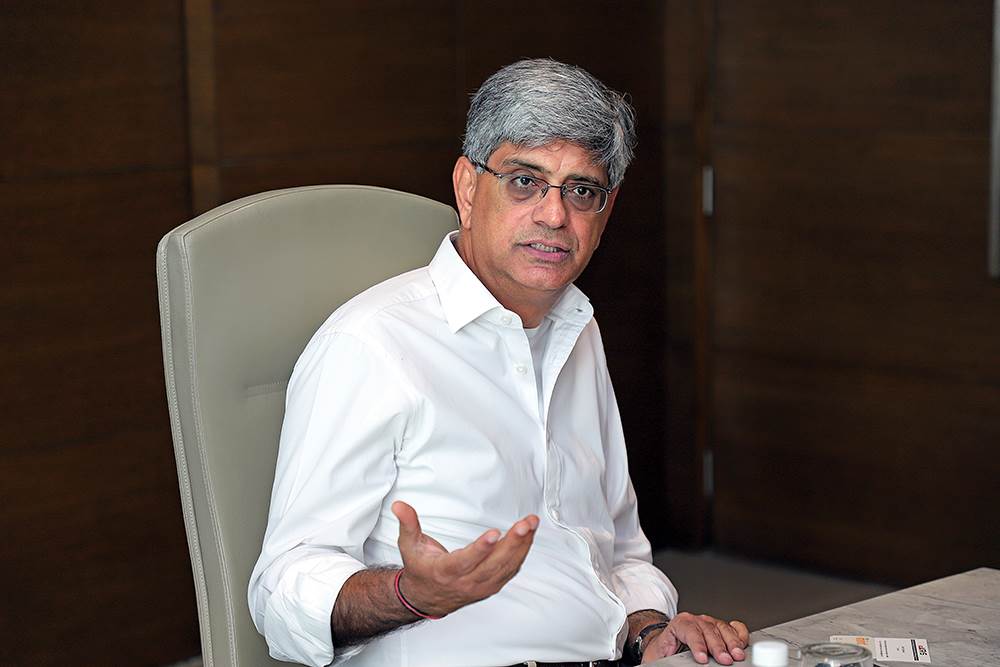 Jayant Davar: "Robotisation needs to be looked at more seriously as it dramatically enhances productivity, also improving upon quality by bringing in standardisation in the work output."

While the collaboration started to bear fruit with initial operations in India commencing with supplies of locks for Hero Honda’s motorcycles, it was only in 1996 that Honda also entered the Indian passenger vehicle market, and Sandhar Technologies emerged as the natural choice for locking systems on the company’s future product offensive. The  Japanese carmaker’s first product launch in the PV segment was the City sedan, which has gone on to earn a solid reputation for itself and remains a popular buy in the Indian midsize C-segment space for over two decades now.

As a captive supplier to Honda Cars India, Sandhar today belts out its product to the Japanese carmaker's two plants – one each in Greater Noida and Tapukara, near Alwar – from a dedicated facility located at Pathredi, in Rajasthan’s Bhiwadi industrial district. The plant caters solely to Honda's need for locking systems, door handles and mirrors for its model line-up on offer currently. It is also conjointly working with the carmaker to supply for its future product pipeline for India.

Sandhar’s Pathredi unit performs the machining and the assembly work of the complete locking systems, including the set-key cylinders for both manual as well as automatic transmission variants in Honda’s model line-up, which includes the Brio, Amaze, Jazz, WR-V, BR-V, City and the CR-V. The flagship Accord hybrid sedan, however, comes as a CBU offering. While the machining process includes wave-cutting on the traditional key blanks coming in from Honda Lock China, Sandhar has also started assembling the latest jack-knife keys on offer on the carmaker’s recent launches.

An interesting fact is that with millions of cars being produced every year, the pattern engraved on the blanks repeats after a cycle of every 3,314 keys but every key differs from the other by virtue of the distinct electronic code embedded in the engine immobiliser transmitter placed inside the key fob. 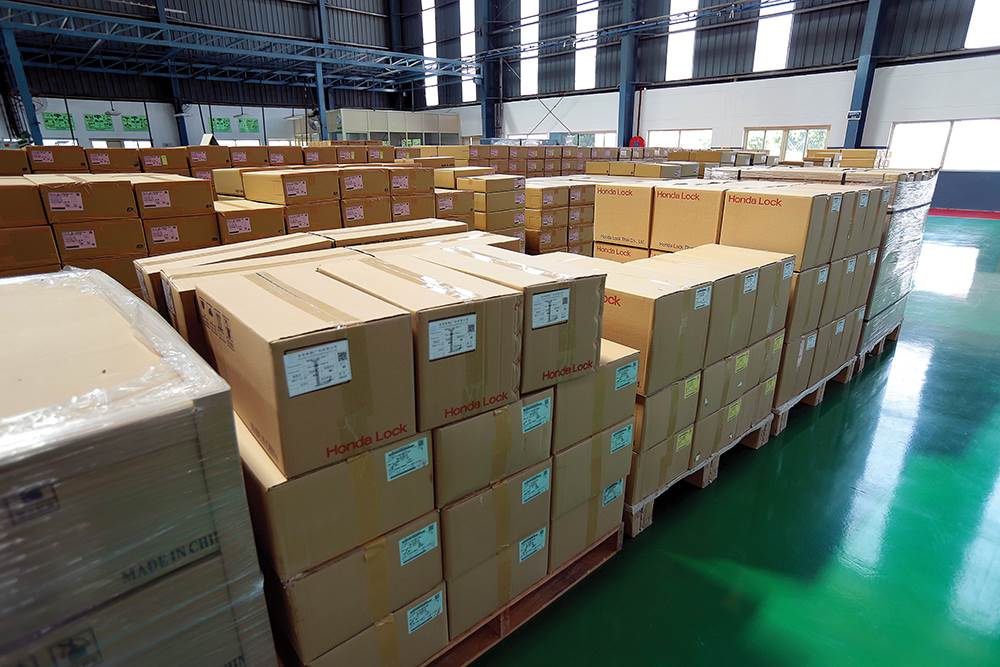 The imported set key cylinders are machined and assembled at Sandhar.

With increasing vehicle electronics, the remote keyless entry feature is being gradually replaced with the passive entry and passive start (PEPS) system, which completely eliminates the need of using the physical key to get inside a car and to turn on the ignition. Instead, all of the work gets done by the proximity sensors placed on the outer door handles, along with a start-stop button near the steering wheel, which electronically replaces the action of turning the key to crank the car. While Honda today offers the smart-entry system only on the top-end variants of its City sedan and the WR-V crossover, the volumes, however, account for a miniscule 5 percent of the company’s total sales, impeding the large investment required for its localisation.

As a result, the PEPS locksets are today being imported as complete assemblies from Honda Lock, with only the machining of the integrated key blanks being done locally. Aiming to entirely replace manual key locks with PEPS in the 20YM City, Honda is set to push the volumes of these components significantly, thus, making local assembly of the smart entry system a more sensible option in the future. Collaborative work between Sandhar Technologies and Honda Lock is underway to localise these electronic components in India over the next couple of years. The plant also deploys Poka-Yoke systems for error-proofing the entire key and lock-set assembly process and stringent quality assurance measures like slot-and-twist check tests ensure smooth operation of these frequently used keys when the car goes into the hands of the end customer. The facility assembles 880 car sets of locking components every day over a single shift.

Supplying outside rearview mirrors (ORVMs) to all of Honda’s offerings in India, Sandhar manufactures the complete mirror assembly, with the outer housing of the safety-critical component coming in from its plastic injection moulding plant in Bawal, in Haryana, and certain other child parts like actuators for mirror fold and adjust functions being imported as pass-through components. 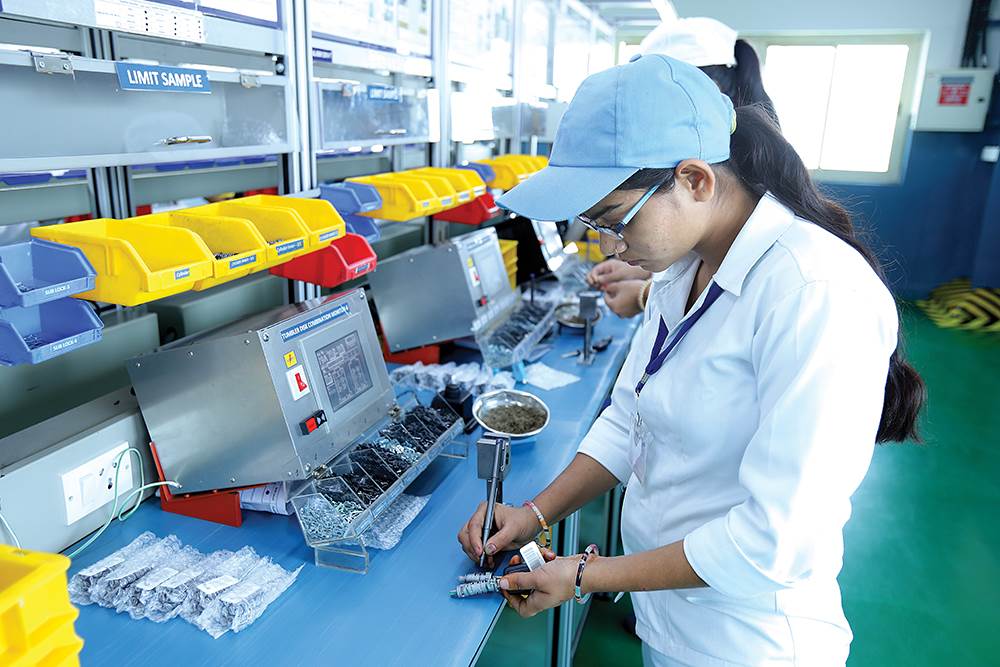 Pathredi plant has a strong representation of women.

The ORVM assembly process starts with the painting of the mirror outer housings in the state-of-the-art paint shop installed inside the Pathredi plant. With most variants on cars featuring body-coloured ORVMs these days, Sandhar Technologies routinely gets a production plan from Honda every fortnight, detailing the colour code of the cars to be built on its assembly line. The colour matching of the ORVMs painted at Sandhar with that of the car shells getting painted inside Honda's own paint shop is ensured by procurement of the paint and other related consumables from the same vendors at both ends.

The paint shop at Pathredi sees a good level of automation and deploys Kawasaki-sourced robotic arms for ionisation, primer and base coat application processes, performed over the inbound plastic housings. 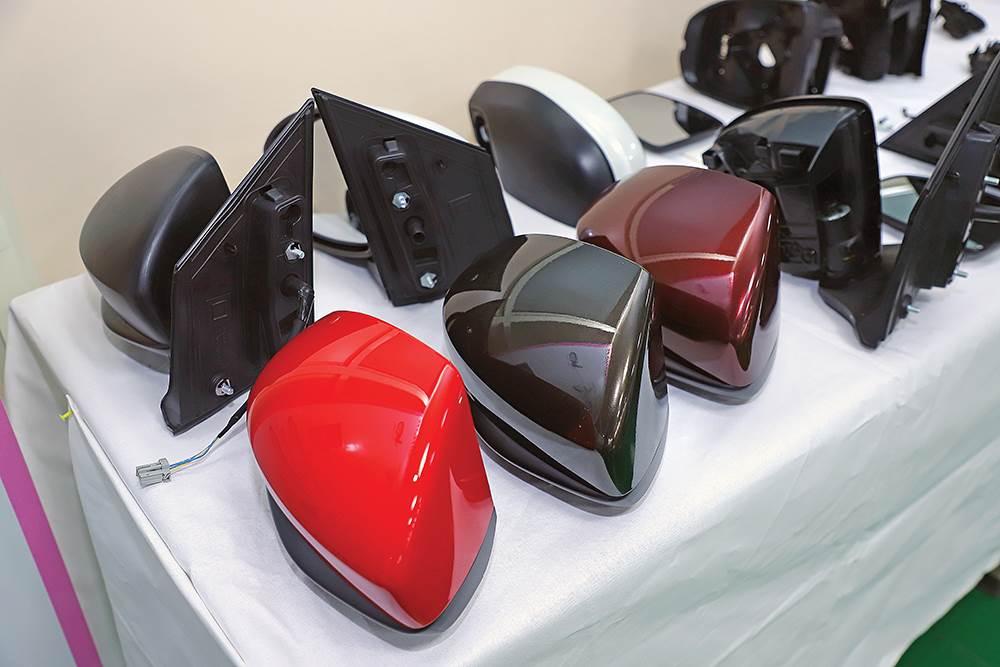 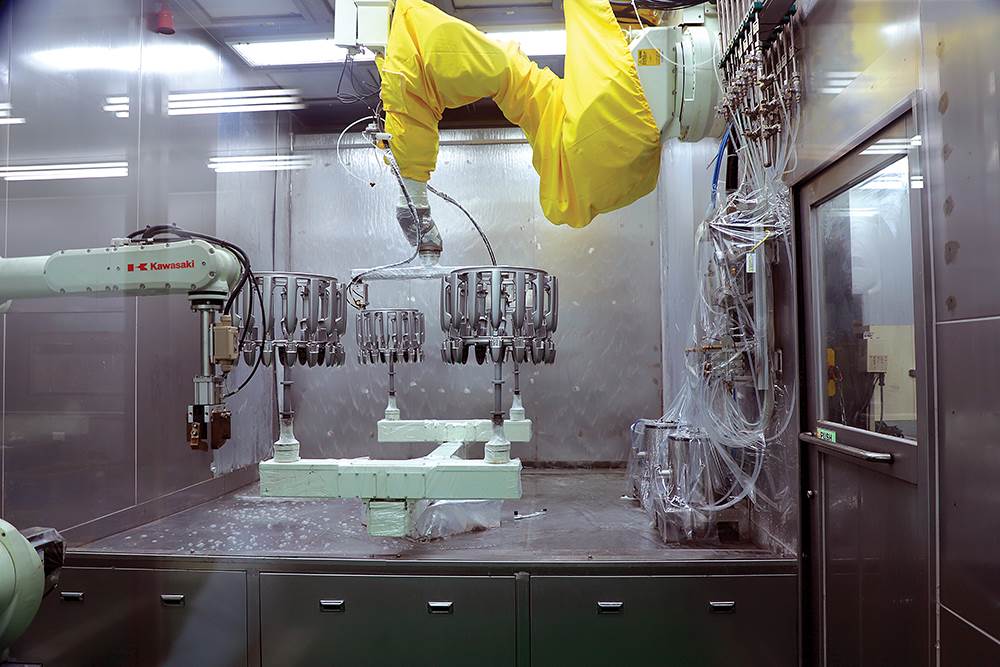 Speaking to Autocar Professional on the sidelines of the plant visit, Jayant Davar, co-founder and managing director of Sandhar Technologies, affirmed his viewpoint on shopfloor automation and Industry 4.0 at large. "Robotisation needs to be at looked more seriously as it dramatically enhances productivity, and also improves upon quality by bringing in standardisation in the work output," said Davar. 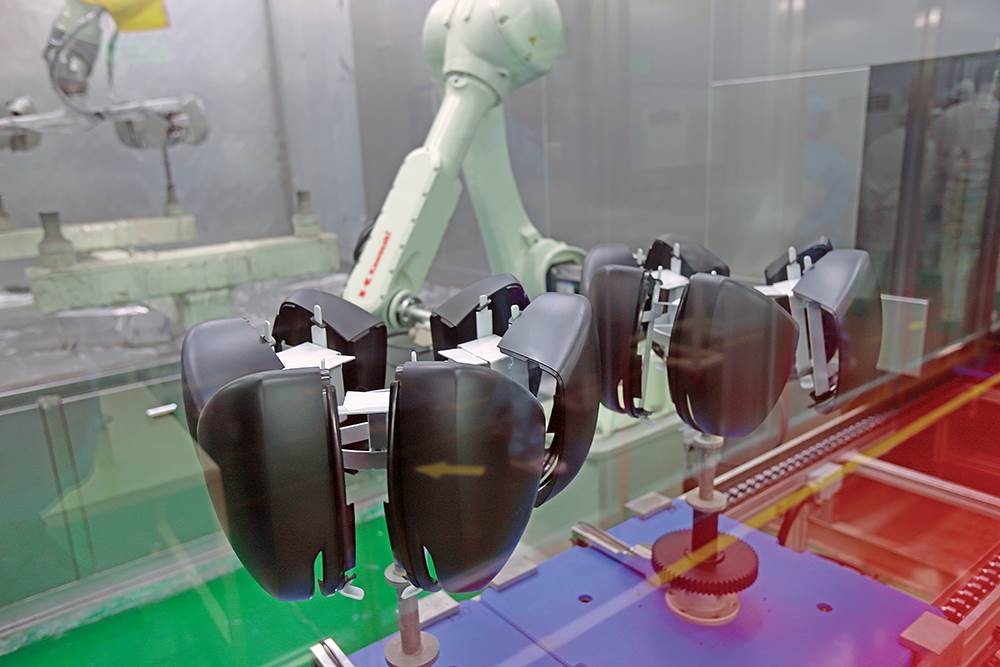 Once the base coat is applied, the housings are cured in the paint kitchen, which is equipped with temperature and humidity control sensors and uses an IR heating system to dry the paint in quick time. The paint shop also gets automatic nozzle cleaners, which can switch between two colours in less than two minutes, and the hangar cleaning is done by pyrolysis, which decomposes the residual paint by burning it at a high temperature to curtail discharge of any harmful liquid effluents during the entire paint procedure. 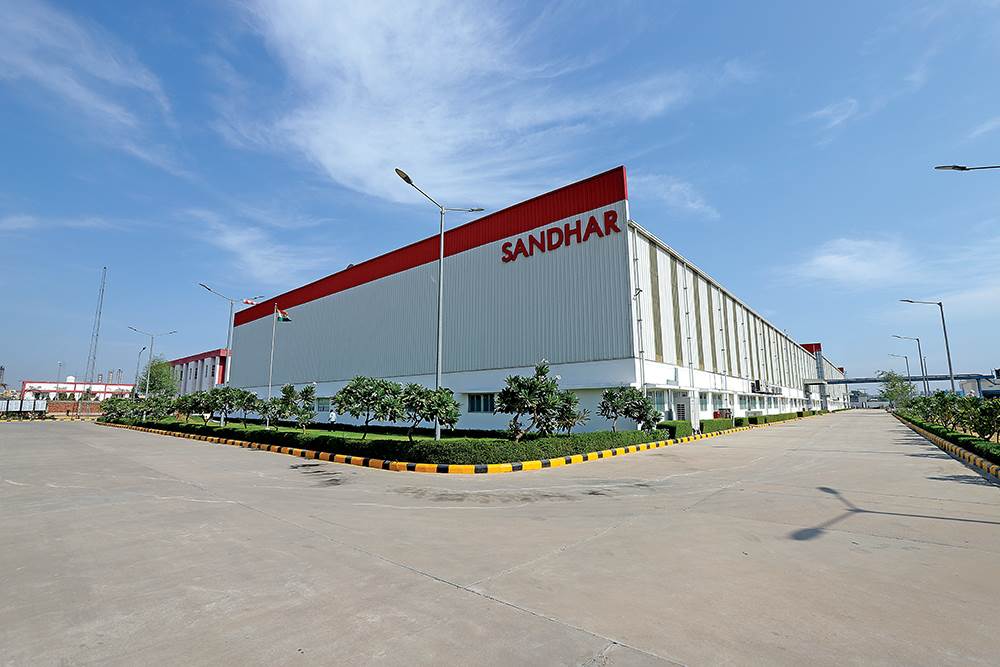 Sandhar's assembly facility at Pathredi has a small carbon footprint. It sees ample use of natural light and leverages solar power to balance part of its energy consumption.

After the painting process, the mirror housings are assembled with the other constituent parts of the ORVM assembly, and the process culminates with the actuator and twist-angle quality check tests, to ensure optimal performance in the real world. While Sandhar Technologies assembles 880 car sets per day, it has a total capacity to come up with 1,734 car sets over two shifts at its plant.

Like ORVMs, the door handles, which are shipped from Sandhar’s Bawal facility, too undergo the painting process inside the paint shop, albeit the ones which are chrome-plated see their chrome coatings being imported from Honda Lock China and getting assembled over the outer handle shells. While Honda has tried localising chrome plating in India, it has not yet been able to come across any vendor, which could meet its quality specifications, thus keeping the plans at bay. The proximity sensors for the smart-entry system, which go on the outer door handles, are also brought in from Honda Lock China. Handles are painted by syncing colour code of the batch as per the production plan received from HCIL every fortnight.

The painted handles are assembled at the line, with the penultimate station being that of nut insertion at the handle’s base, ensuring that the handles can survive heavy opening forces in the range of 80 Newton. The handle assembly gets completed in a quality check procedure, where the handles are subjected to a significant number of door-open lifecycles.

Being one out of Sandhar's 31 plants in India, Sandhar’s Pathredi facility is high on environment-friendliness. While it makes optimal utilisation of natural light, there are also solar panels installed at its roof-top, offsetting some of its energy requirements. There is a strong push towards women empowerment as well – a significant 80 percent of the total workforce of 250 associates, including those working on the shop floor, are women. 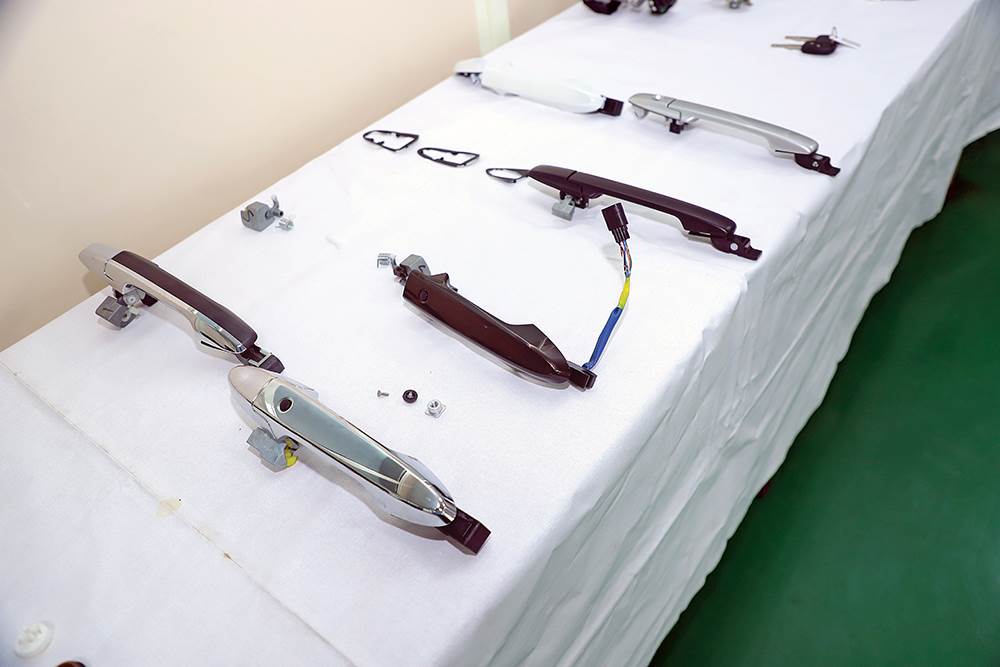 Outer door handles for the Honda City and first-gen Amaze. The smart-entry request sensors are imported from China.

Honda Cars India recorded strong sales in the domestic market in FY2018. With the new Amaze to be launched on May 16, and four other cars –  the CR-V, Civic, HR-V and the new City – set for rollout over the next two years, Sandhar would be hoping that the carmaker’s sales keep  accelerating, and it continues to do business with the Japanese carmaker, lock, stock and barrel.