Ricardo played a crucial role in the development of JCB’s Fastrac tractor, which powered to a new Guinness World speed record. 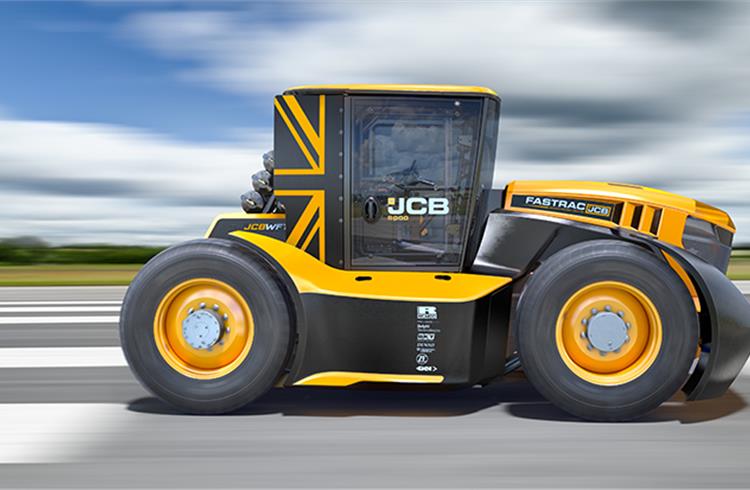 Ricardo played a crucial role in the development of JCB’s Fastrac tractor, which lorry mechanic and motorcycle racer Guy Martin powered to a new Guinness World speed record with a top speed of 135 mph/218 kph recently.

The achievement comes after JCB set the British record for the fastest modified tractor at Elvington Airfield near York in June 2019 in a tractor designated ‘Fastrac One.’ It reached a speed of 103.6mph with motorbike racer, lorry mechanic and TV personality Guy Martin in the driver’s seat. JCB then embarked on an ambitious plan to break its own record and developed ‘Fastrac Two’ – which was 10 percent lighter, more powerful with better aerodynamics. It hit a peak speed close to 154 mph/248 kph on its way to clocking a record average of 135 mph/217 kph. This was also driven by Guy Martin.

This record-breaking intent was not without its fair share of engineering precedent for Ricardo. Much of the same Ricardo team was responsible in 2006 for the development of the two 750 hp engines and supporting systems of the JCB Dieselmax Land Speed Record car. The company has provided technology and assistance for a range of customers, from mainstream automotive and industrial to motorsport, who seek the ultimate in performance, emissions reduction and fuel economy.

Ricardo used cutting-edge digitalisation methods to maximise performance, value and efficiency. These included using virtual reality (VR) for design reviews which enabled engineering teams across multiple sites to collaborate quickly and in real time, without having to travel extensively. In particular, creating a ‘virtual wind tunnel’ helped Ricardo, JCB and Williams engineers to collaborate remotely on aerodynamic optimization: identifying areas where work was required to avoid the generation of significant drag.

One way the Ricardo engineers did this was by selecting a turbocharger that delivered a pressure ratio of 5:1, while taking steps to improve the turbo lag that might otherwise be expected of such a large single-stage turbo. An electric supercharger, similar to that used on some production cars, helps get the tractor off the line. An air pulse system gives the turbocharger an extra ‘kick’ of energy to spool it up quickly as the vehicle accelerates through the gears – this is crucial in achieving high speeds over the comparatively short distance available on the runway.

The record-breaking performance of the Fastrac engine was achieved by incorporating technologies which are essential for low emissions, high fuel efficiency and high power-density engines. Advanced control, high-pressure common-rail fuel injection and advanced boosting (air pulse and electric supercharger) systems are instrumental in the very low level of emissions achieved by current and future production automotive and industrial engines.

Stephen Dyke, MD of Ricardo Automotive & Industrial said, “Ricardo’s established and proven leadership in rapid-pace, high-performance development programmes, ranging from simulation, design, analysis, supplier liaison, procurement and build, through testing and rapid modification and performance optimization, was critical to the success of the JCB World’s Fastest Tractor. It was great to have a leading role in this project with the team at JCB and our fellow engineering partners.”