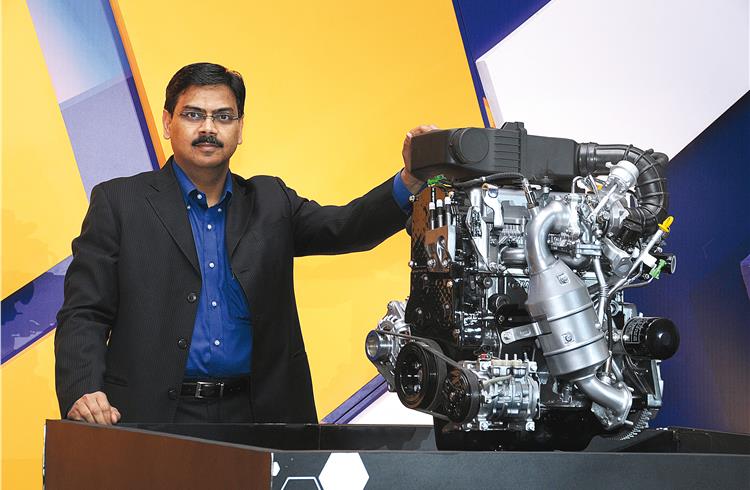 As buyers in India increasingly consider petrol-engined cars, the largely-diesel OE bets it can woo more buyers with Revotron, a new petrol engine family that promises a blend of mileage and power. Sumantra Barooah reports on Tata Motors' new engine of growth.

Tata Motors has launched the first member of a new family of petrol engines that will power its future range of models in the passenger vehicle market. Called Revotron, the first engine is a 1.2-litre turbocharged, intercooled with MFPI. This engine is a major upgradation of Tata’s Xeta four-cylinder engine that powers the current Indica hatch.

The new Revotron 1.2T incorporates a high-boost turbocharger developed by Honeywell. The water-cooled turbocharger, with its low inertia wheel, provides a faster response for a flat, seamless segment-highest torque density, the company has claimed. The engine will also offer multiple driving modes to drivers – three different modes – depending on driving conditions.

With the new engine series, Tata Motors hopes to take its share of petrol in the overall compact car segment to 9-10 percent which is about the size of its diesel share. The Indica competes with the Ritz and Hyundai i10. At present, Tata petrol cars sell in single digits with only about 120 units sold over the last year. Tata is a well-known diesel player in the compact segment and will hope to make a good impact in petrols now.

Tech of the town

The Revotron Series has been developed with inputs from global players in the areas of combustion, boosting, friction and calibration. Tata Motors worked with AVL (Austria) and key technology partners like Bosch, Honeywell, Mahle and INA to bring in technology. According to the company, the engine series has been tested for global standards along with a testing car by TEnergy of Korea to ensure that the engine performance is best-in-class. The Revotron series will include three- and four-cylinder petrol engines aimed at offering superior performance and high fuel efficiency.

The engine itself is lightweight and powerful, with a stiffened crankcase that minimises NVH. It has been refined with a tuned intake and exhaust system for improved combustion; NVH has been reduced with the use of a silent-steel oil pan and lower auxiliary system noise. Enhanced with an ECU for precise control, the engine is powered by wire technology for a smooth drive experience. An optimised water jacket and head gasket, using computational fluid dynamics (CFD) technology, ensure efficient combustion and reduce thermal inertia. In addition, the engine has been incorporated with an eight-hole fuel injector for superior efficiency and assisted by innovative calibration strategies.

The Revotron series was designed based on feedback from car owners, car enthusiasts and expert drivers from across the globe, observing their driving habits followed by extensive testing in gruelling climatic conditions in India as well as in countries like the UK and Korea. With enhanced customer benefits, Tata has positioned the Revotron series as a blend of performance, refinement and economy.

By the time this issue reaches readers, the first car with the Revotron engine would have been unveiled or launched. Tata Motors would hope the combination of a new model and the new engine will help reverse its fortunes in the passenger vehicle segment.

How many driving modes will the Revotron 1.2-litre engine offer to the driver?

Was this feature developed in-house?

Would you patent this feature?

We are exploring that. Some luxury cars have multi-drive mode. We are looking at whether this can be patented.

Is this Honeywell’s smallest turbocharger?

It is their smallest one. They have developed it anew. They have some carry over items but the housings are new completely.

Does Tata Motors hold any patent on any feature of this engine?

There are 20-odd new innovative ideas. We are in the process of exploring at the moment which ones we can patent. There will be a lot of research into which ones are patentable, and then we will go ahead. These are mainly in combustion, weight of items like piston to mention a few. Then, some amount in crankshaft in terms of balancing.

You have also used forged items to reduce friction. Have you also reduced the number of components in this engine?

Yes, we have. To achieve torque levels of 140Nm from a naturally-aspirated petrol engine, you would have to go for a 1.6-litre four-valve per cylinder engine. When you have four valves, you also have more moving parts, more friction. Instead we chose to downsize and give it in a 1.2- litre engine and only two valves per cylinder.

Essentially, when you have boosting then you don’t need two valves because it pushes the air inside the engine whereas in a naturally aspirated engine, it depends on the head generated by the piston.

A three-cylinder version is also in the pipeline. What would its USP be?

In this family we are also trying to make ourselves capable of coming out with all the new technologies which are there in the world. When you move from a four-cylinder to a three-cylinder, you actually reduce the number of parts, the friction. So it becomes more efficient.

Essentially, which engine from this family and for which application depends upon defining its equation of balance between economy, performance and refinement. Depending upon the segment, we will decide what the right balance for this segment for the car is and decide what kind of engine we need to develop.

Could the two-cylinder engine also benefit from the Revotron range?

We are happy with the Nano engine because it has been able to give a good balance of these three and is doing its job in that particular segment. But when we develop a new family of engines, there are a lot of learnings that we can pick up and put into some of our current engines also. It should enhance the value proposition for customers.