Who pays when a driverless car crashes?

Cars of the future will need to collect a basis set of data so insurers can determine who was in control of the vehicle at the time – the driver or the car? 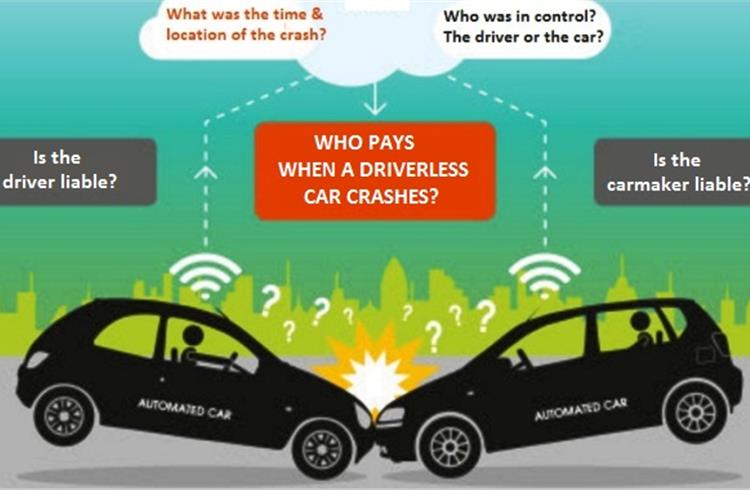 As autonomous cars are touted to populate the roads of the future, UK-based Thatcham Research brings out an important take on the insurance scenario of a driverless vehicle. Cars of the future will need to collect a basis set of data so insurers can determine who was in control of the vehicle at the time – the driver or the car?

Thatcham Research believes one of the key challenges for the future of automated driving will be determining where liability rests in the event of an accident with an automated car.  A crucial part of making sure claims are settled fairly will be to understand who was in control of the vehicle at the time – the driver or the car?

According to Peter Shaw, chief executive at Thatcham Research: “Future legislation needs to protect the consumer so that in the event of an accident, who is held responsible and pays can be quickly determined. Was it driver error or a failure of the automated driving system? This can only happen if their insurer has access to key data about the crash. We would like to see car manufacturers and legislators working together with the insurance industry to develop a framework to make this happen.”

British insurers are leading efforts to have a standard set of data agreed at an international level which would be easily accessible in the event of an accident involving a highly automated vehicle. This would include an indication of whether the vehicle was operating autonomously or not, and what technology was in use.

“It’s in everyone’s interests to be able to establish the facts quickly and the proposals for standardised data being put forward by UK insurers would achieve this,” adds Shaw.

This information would be used to:

- Establish liability for anything that had gone wrong

On occasions where faulty technology was shown to have caused an accident insurers should be able to recover the costs from the manufacturer the ABI says, helping keep insurance premiums down.

Related: Whom should an autonomous car save in a crash?

The information insurers want to see universally collected only concerns the autonomous systems and driver interaction – it is not proposed that any information measuring driver performance should be gathered.

The data would cover a period from 30 seconds before to 15 seconds after an incident and is:

- GPS record of the time and location of the incident

- Confirm the mode of the vehicle – autonomous or manual

- If in autonomous mode, whether the vehicle was parking or driving

- When the vehicle went into autonomous mode, and when the driver last interacted with the system

- Any driver activity such as braking or steering

- Whether the driver’s seat was occupied, and whether the seatbelt was fastened

The UN body responsible for vehicle regulations is preparing to impose its own data requirements on motor manufacturers from 2019, which insurers in the UK are hoping to influence for the benefit of motorists.

Huw Evans, ABI Director General, said: “Insurance is an increasingly innovative sector, constantly responding to evolving technology. We have created new ways for people to manage their motor insurance via their smart phones, and a service to collate people’s pension savings online is in development. Insurance enables technological advances in other sectors, and we are backing the development of automated cars one hundred percent. As part of insurers’ commitment to getting automated cars on the road and dramatically improving road safety, there will need to be basic data easily available to make sure customers are looked after if something goes wrong. This would offer public reassurance by protecting motorists from being incorrectly blamed if something fails with their car, helping police investigations and supporting prompt insurance pay outs.”

- What is a truly autonomous car?

- Why autonomy won't kill off driving as we know it