It was earlier this year when the grand old man of the global automobile industry finally decided that it was time to step down as Chairman of the company he had been spearheading for over four decades. 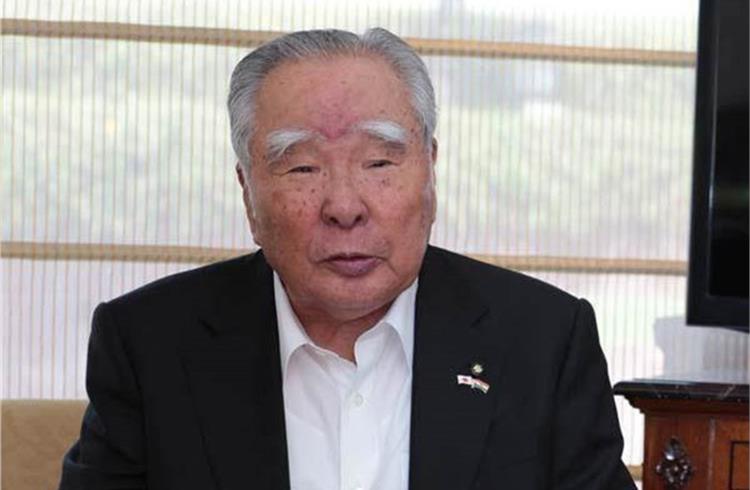 It was earlier this year when the grand old man of the global automobile industry finally decided that it was time to step down as Chairman of the company he had been spearheading for over four decades.

The 91-year-old Osamu Suzuki made known in February that he was relinquishing his top post in June and would continue as advisor to Suzuki Motor Corporation (SMC). The nonagenarian is no stranger to India and his name, likewise, is all-too familiar within the country’s automotive ecosystem.

After all, it was O Suzuki who played a huge role in establishing Maruti Udyog way back in the 1980s which has since grown by leaps and bounds over the years and is today the market leader by miles with a share of nearly 50 percent. Its closest rival, Hyundai, accounts for less than 20 percent with other automobile brands scrambling for the remainder of the pie.

The way Maruti has redefined the game in terms of costing efficiencies and creating a niche in the compact car space is a result of O Suzuki’s incredible manufacturing acumen, a trait that even his fiercest rivals have acknowledged. It is this passion and commitment to achieving an astonishing cost structure that has primarily helped Maruti stay comfortably ahead of competition.

More importantly, it is O Suzuki’s unrelenting focus on keeping wasteful expenditure in check that has done the trick in keeping a small carmaker like SMC stay profitable. The fact that the company stayed true to its DNA of making compact, affordable cars worked like a charm in a price-sensitive market like India where, barring Hyundai, other carmakers have struggled to take on Maruti.

In sheer exasperation, some like General Motors and Ford have actually quit the arena because they just could not make money and it was getting increasingly difficult to sustain losses forever. Yet, Maruti continued to grow and India has been SMC’s largest market for many years now.

O Suzuki was also keen on going global which explains why an equity alliance was sewn up with GM decades earlier. The two were going strong and there were indications that once the Indian government shed its stake in Maruti, GM could end up playing a more proactive role. Nothing of the kind happened eventually even while a solo and rejuvenated Maruti Suzuki grew from strength to strength in this competitive market.

Perhaps the biggest setback for O Suzuki was the alliance with Volkswagen which promised the moon but ended up being a nightmare for both partners. The SMC Chairman, in particular, made no bones about the fact that he was annoyed and exasperated with the way things were going and was totally relieved when the divorce came through.

This was when he uttered those famous words: “It used to feel like a small bone was stuck in the back of my throat. It is so refreshing now.” This was vintage O Suzuki, the fighter who ensured that he would not be boxed into a corner. He had seen it years earlier when SMC and the Indian government were locked in a tug-of-war which led to an angry exchange of words before peace prevailed.

Despite the VW setback, it was clear to O Suzuki that his company needed the scale and tech to keep itself relevant in the future. The tie-up with Toyota was the best thing that could have happened since this was an arrangement within the fold of Japan Inc where companies respected each other.

Toyota needed SMC’s support in regions like India where its own presence was marginal while extending its enormous competencies to the latter in areas like electrification and access to new markets. Things have been rock steady thus far and O Suzuki will have every reason to believe that the company he nurtured so carefully for decades is in good hands now.