Steffen Knapp, former Director of Volkswagen Passenger Cars India, who is preparing for his next assignment overseas, pulled out all the stops to ensure high levels of team spirit at the India operations. 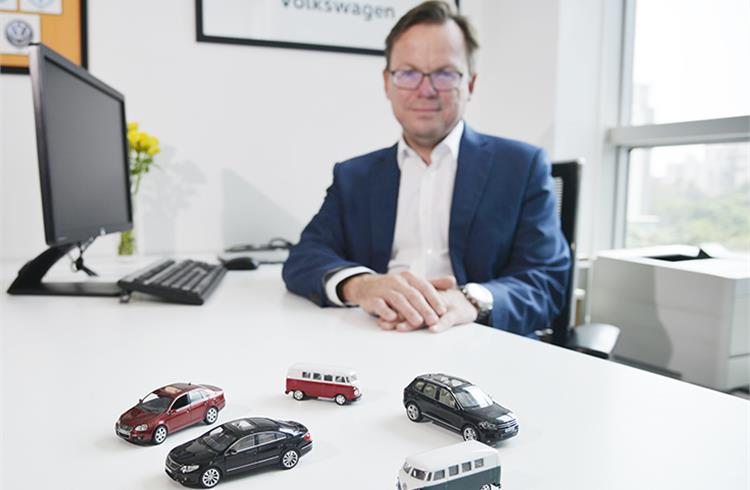 Steffen Knapp, former Director of Volkswagen Passenger Cars India, who is preparing for his next assignment overseas, pulled out all the stops to ensure high levels of team spirit at the India operations.

Steffen Knapp would have ideally liked to be in India to bid his colleagues adieu but Covid-19 ended up being the spoilsport. “It is a difficult farewell because we are here in Austria and cannot say goodbye to friends in Mumbai,” the former Director of Volkswagen Passenger Cars India says in a video interview. Knapp’s three-year tenure came to an end in October and he is now preparing for his next international assignment.

“For me and my wife, leaving India is an emotional moment . . . we have moved (countries) many times in our marriage and are used to this life but this time it is not the same,” admits Knapp. India was a different experience altogether for him and his family and they just ended up loving the country.

The experience was especially useful for his children since they got an opportunity to see its tremendous diversity, social differences, the harsh reality of poverty and so on. No wonder they were excited when Knapp gingerly told them that they would now be moving elsewhere to another part of the world. “This positive attitude was thanks to the India experience and my children today are more open to the idea of mixing in different societies and religious backgrounds,” he says.

He is still touched by a message from a colleague in India who was overwhelmed by the fact that a person at Knapp’s level actually spoke to him. “To me, speaking to someone at work is really no big deal but the fact I could make this individual happy was a different experience,” he says.

The years spent at Volkswagen India have been enriching for Knapp and he pulled out all the stops to ensure high levels of team spirit within the office. It was not an easy task but the effort paid off eventually. The makeover was significant given that when Knapp had first landed up to take charge, everyone in the VW India ecosystem was pretty much an island.

It was easy to figure out why this was the case — the team was dispirited because they had not experienced success and it was important, therefore, for the new leader to infuse positive energy. Even while the proposed alliance with Tata Motors did not quite take off, headquarters at Wolfsburg reaffirmed their faith in India.

During this time, Knapp and his team worked relentlessly on new initiatives for the Volkswagen brand which included pop-up stores, digitalisation, corporate clients and so on. This would be a critical base for the India 2.0 programme that would follow and the creation of Skoda Auto Volkswagen India.

“The foundation to move to the next level is in place with India 2.0 There is a clear plan ahead and I am really pleased,” says Knapp. He is also delighted that VW is a stronger brand today with a robust network. The top management team is also virtually intact since the time he took charge three years ago.

“There is continuity which is important. We have now created a team and are part of an organisation working in the same direction,” continues Knapp.
In his view, team bonding is not about “hugging and kissing each other” but respect and willingness to help even while there is healthy rivalry within the setup. “I truly believe that you can be a leader by being nice to people. It is not essential to scream and yell at them to impose hierarchy,” he says.

Knapp believes the VW Group has learnt from its mistakes and is now better prepared on aspects like localisation and TCO. “I did my bit in giving a strategy and direction. Today, it is one group and needs to explore synergies while finding solutions together as different brands,” says Knapp.