The new MD, President and CEO of Honda Motorcycle & Scooter India is keen that India doubles up as a key manufacturing hub and caters to markets in the developed world, even as the focus on quality remains sacrosanct. 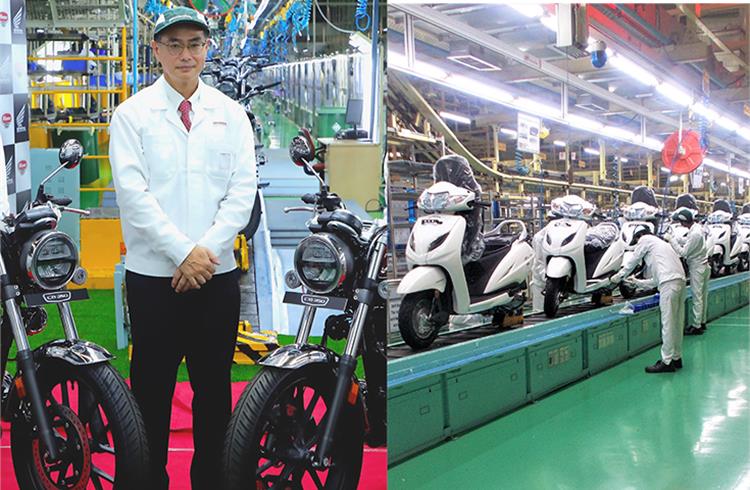 The new MD, President and CEO of Honda Motorcycle & Scooter India is keen that India doubles up as a key manufacturing hub and caters to markets in the developed world, even as the focus on quality remains sacrosanct.

The timing of his appointment was perhaps ominous. Atsushi Ogata was given the responsibility to take charge of Honda’s two-wheeler operations in India at a time when Covid-19 was on the rampage and the country in the midst of a lockdown.

This also explains why the new Managing Director, President and CEO of Honda Motorcycle & Scooter India (HMSI) had to cool his heels in Bangkok before heading out to this part of the world as the lockdown began easing out gradually. Today, Ogata is comfortably steering operations in India at a time when the economy is showing signs of revival and two-wheeler sales are growing.

Yet, he will only be too aware that there are a host of challenges ahead. The good news is that HMSI has grown rapidly over the years to become the strongest challenger to its former ally, Hero MotoCorp. It has four plants spread across the country — Manesar (Haryana), Tapukara (Rajasthan), Kolar (Karnataka) and Vithalapur (Gujarat) — with a cumulative capacity of 6.4 million units.

Come to think of it, HMSI has been on overdrive since it parted ways with Hero nearly a decade ago. Its capacity has quadrupled since then but it still has not been able to dislodge Hero from the No. 1 pedestal even though it cannot be faulted for not trying.

From Ogata’s point of view, the top priority is to ensure that there is a strong customer connection with the Honda brand. To that extent, just focusing on numbers and gaining market share at any cost will not be the answer. The new HMSI chief will be keen to drive home the message of Honda’s premium image which means quality will precede quantity.

After a nine-year stint in China and three years in Japan, Ogata’s last position, before moving to India was Executive Director of Regional Operations of Asia and Oceania. With over 35 years of experience across geographies, he knows that India is critical to his company’s two-wheeler strategy.

It is but natural that Honda will ensure that the country doubles up as a key manufacturing hub and caters to markets in the developed world. After all, India has now moved on to the Bharat Stage VI emissions era which means that the technological competencies and cost-efficiencies achieved in this exercise can be leveraged for a host of other countries.

Yet, Ogata will be aware of the fact that this decade will see competition hotting up for HMSI. Even while it is in a comfortable position now, there is no denying the fact that Indian companies like Bajaj Auto and TVS Motor are pulling out all the stops to expand their presence both here and overseas. This is why they have forged tie-ups with big brands like Triumph Motorcycles and BMW Motorrad to grow in the growing segment of midsize motorcycles.

HMSI recently threw its hat into the ring with the 350cc H’Ness clearly with an intent to take on Royal Enfield and also make a statement of its intent in this space. The latter made waves with its Meteor, which is a clear indication that nobody is willing to give up their positions in a hurry. Ogata knows that this is a different competitive terrain where HMSI will need to showcase new technology to make a difference.

It remains to be seen if the company will pursue electric aggressively and would rather stay true to the internal combustion engine. It may well change its mind seeing the market response to the Bajaj Chetak. Will HMSI see a collaborator in the electric space should it decide to throw its hat into the ring? A section of the two-wheeler market believes this could well be Yamaha but for now this remains in the realm of speculation.

Ogata knows that there are tremendous opportunities to woo customers in the post-Covid era where almost everyone will be wary of using public transport. HMSI’s trusted mascot Activa continues to do well but motorcycles are now back in favour. These are interesting times for Atsushi Ogata.