Net zero is no doubt the hottest topic on earth. India’s zero emission target by 2070 is seen to be bold, ambitious and challenging. Environment experts tell that speedy electrification with innovative low-carbon tech needs to be the way forward. 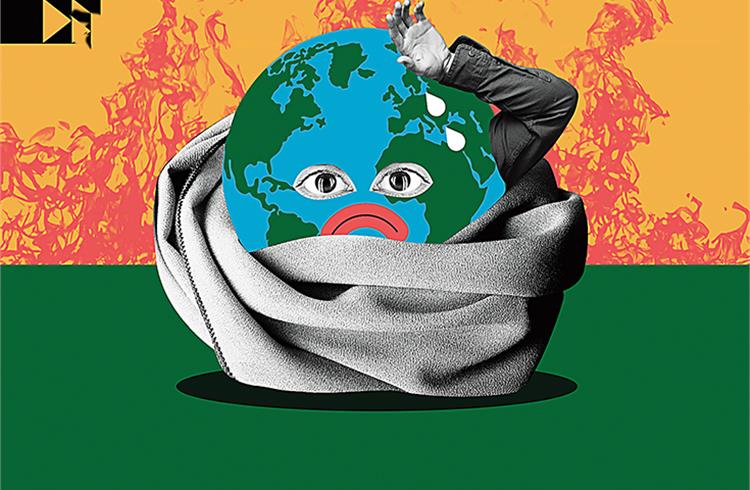 If it could convey in words, Planet Earth would have told the polluting world to “cop it” when it comes to the scores of industrial and other activities that are spoiling the atmosphere and making a once-pristine world unlivable. But speak it has in CY2020 and how — floods across Asia, typhoons, earthquakes, forest fires across continents starting from Australia to Amazon and California. This was, no doubt, the focus of world leaders at the UN climate change conference (COP26)in Glasgow, UK last month.

Commonplace lexicon now includes environment, climate action, global warming and sustainability. It’s common knowledge that the world’s mean temperature is rising and we need to act fast in cutting it down and ensure a greener future for our children.

The transportation sector plays a key role in this, accounting for close to 25 percent of the world’s carbon emissions. In the race to net zero, environment-friendly transportation solution is coming across as a necessity today. However, sustainability comes at a cost and for a developing nation like India the balance between a greener tomorrow and a cleaner means of mobility leading us there is neither the easiest of the problems nor the solution. Perhaps, that’s the reason that India’s stance at COP26 to scale up existing climate targets attracted widespread debate.

Is net zero by 2070 ambitious?
So what exactly did India commit to at the COP26? The most significant takeaway has been the commitment to achieve zero carbon emissions by 2070. That apart, the country’s five-point strategy for a greener tomorrow includes a commitment to:
- Take its non-fossil energy capacity to 500 gigawatts
by 2030.
- Meet 50 percent of its energy requirement from renewable energy by 2030.
- Bring its economy’s carbon intensity down to 45 percent by 2030.
- Reduce 1 billion tonne of carbon emissions from the total projected emissions by 2030.

What’s particularly interesting is the series of steps and targets that India plans to meet by 2030 to make ‘net zero by 2070’ a reality. In many quarters globally, India’s targets have been termed as ‘ambitious but ambiguous’ in terms of the plan in achieving it. Anumita Roychowdhury, Executive Director — Research and Advocacy, Centre for Science & Environment (CSE). says what was really unexpected is “the five-point commitment which includes net zero by 2070.” She explains net zero by 2070, seen in isolation, is like long-term vision but before that, “India has actually given other clear commitments for 2030.” 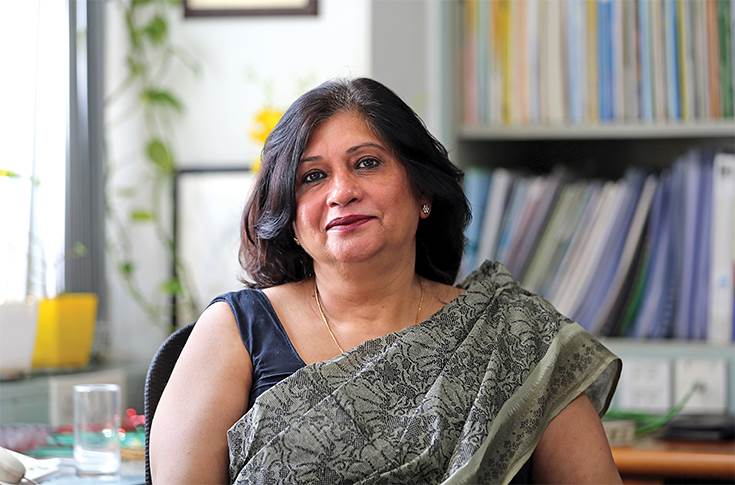 TERI’s Vibha Dhawan: “India’s five-point action plan should be looked through the prism of development, climate justice and meeting the aspirations of one-and-a-half billion people.”

Vibha Dhawan, Director General of The Energy and Resources Institute (TERI), too agrees with this assessment and calls the “five-point action plan a huge step.” According to her, “India has announced concrete targets and taken a pragmatic approach for short-term, till 2030, and carbon neutrality in the long-term, by 2070. All this should be looked through the prism of development, climate justice and meeting the aspirations of one-and-a-half billion people.”

But that in no way suggests that it will be a cakewalk for India to achieve these well-outlined targets over the next nine years.

Challenges for India
The transportation sector in India is no doubt a key contributor to the rising pollution and emission levels in the country. From the decarbonisation perspective, it is one sector which has been considered rather obstinate globally. Typically, from the Indian perspective, explosive motorisation in urban India and the sprawling nature of ever-growing metro cities is seen as one of the primary road blocks.

According to TERI analysis, passenger demand (in passenger kilometres) has jumped eight times and freight demand (in tonne kilometres) has risen six times since 1992. This has resulted in five times increase in CO2 emissions, accounting for about 300 million tonnes in 2018. In the business-as-usual scenario, the emissions are expected to increase significantly leading to huge negative impact on energy security, ambient air quality and climate change.

As per the International Energy Agency (IEA), about 20 percent of the CO2 emissions from road transport comes from passenger cars and an equivalent from two- and three-wheelers. A little over 10 percent of emissions is from buses. And the rest — nearly half of CO2 emissions from the road transport sector — is attributed to the freight segment. IEA’s Indian Energy Outlook 2021 ranks India as the world’s third-largest energy consuming country. The report states that energy use has doubled since 2000, with 80 percent of demand still being met by coal, oil and solid biomass.

In fact, the TERI study also brings to light that the transport sector accounts for the largest share in terms of consumption of petroleum products in India — nearly 70 percent of diesel and 100 percent gasoline (petrol).
The use of oil by Indian transport sector has risen
by 91 percent in the last decade, and about 90 percent
of the total energy demand comes from the road
transport sector, followed by rail and air. “With this background, the government’s aim should be to reduce dependency on imported fuel. This could be achieved through different sustainable mobility pathways. These include increased focus on shift to efficient modes of transport — from road to rail, and from private vehicles
to public transport, introduction of emission efficient
fuel and vehicle technologies, and the adoption of alternate low / zero-carbon fuel options like battery-electric, hybrid, bio-fuel, ether-based fuel additives,”
adds Dhawan. 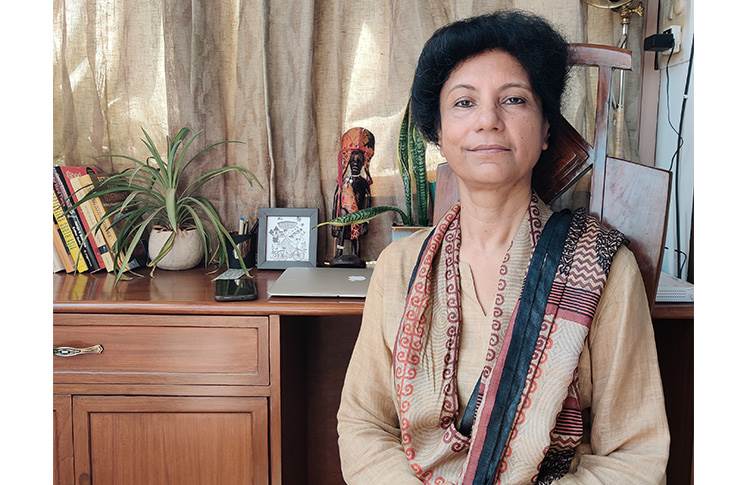 CSE’s Anumita Roychowdhury: "We need accountability in the system. We need target setting, strategy and measurable indicators to manage this transition.”

Roychowdhury further points out that India has for the first time given an absolute target of reducing 1 billion tonnes of carbon emissions from the total projected emissions by 2030 — “Now, this actually means, if we take the total projected emissions, India will have to reduce it by 22 percent in the actual absolute emissions in 2030. This will have to be achieved from different sectors.”
She emphasises that therefore, “we now have to work very hard, and ensure that we have these pathways defined very clearly, with targets, with resources to make it a reality.”

Mitigation and adaptation
India, no doubt, needs a constructive plan to make this transition and eventual decarbonisation a reality. Given the fact that this will entail decarbonisation across sectors and the overall economy, a strong governance framework to execute the massive scale of the program is important. Roychowdhury points out that, “India is also victim to the climate and extreme weather events. As a result, both mitigation and adaptation will have to be planned for.”
Dhawan too feels that “we should develop a
National Plan for Mitigation and Adaptation. We need
to bridge the research gaps by investing in science-
based tools and building data sets. Further, the role of private sector should be augmented in adaptation and resilience building.”

Of course, there is a lot of conversation around the topic but the concern is how do we ensure all that is discussed actually happens? Will legislation bring about that transition or a proper evaluation system needs to be in place? Roychowdhury says, “We need accountability in the system. We need target setting. And we need strategy and measurable indicators to manage this transition.”
Dhawan emphasises on the need for a joint effort by all the stakeholders concerned with regard to solutions for sustainable mobility involving clean carbon-free solutions. She says, “The roles and responsibilities of legislature, non-governmental organisations and business participants go hand in hand. The balance between these factors is critical in achieving the climate change goals from India’s perspective.”

Reiterating the need for some urgent decision, Roychowdhury warns that “if India remains business as usual, by 2040 the share of personal transport usage will take over public transport, and that could be a disaster.” She is worried that inaction or delayed policy action may lead to a situation where the problem will grow but our relative ability to address the issue may weaken further.

Affordability and electrification
That said, let us not forget that the Indian market is an essentially cost-sensitive market. When the various stakeholders need to come together for a common goal, the affordability aspect plays a crucial factor too. Most industry observers and emission experts believe that one simple way is to encourage more public transport alternatives and limit the yearly addition of personal vehicles. It serves three purposes — cuts emission per trip, reduces costs and at the same time resolves congestion.

The last Census shows, those using walking and cycling as main transport modes account for 63 percent of the transport sector. “However, when the transport sector investment is made, almost 50 percent is planned around cars,” points out Roychowdhury, highlighting the glaring contrasts and challenges in this regard. As a result, “public transport is also becoming more economically unviable.”
Dhawan too puts in a word of caution and says that adequate and efficient public transport services are important “to reduce the risk of sheer volume of vehicles overpowering the benefits achieved by introducing BS VI and CAFE-II standards.”

Affordable and sustainable mobility is no longer an option for India as per Roychowdhury and adds that “we need a fiscal strategy to keep public transport service affordable.” According to her, India also needs to address the issue of hidden subsidies. For example, buses (a more sustainable mobility option) pay more taxes than cars, which are more polluting any day. “Cross-subsidising the sustainable transport options is important,” she points out.

Roychowdhury highlights the extent of the problem and the challenge in terms of the investment that’s required: “If India really has to fully transform its transportation infrastructure, it needs to invest nearly 8 percent of its GDP in transport infrastructure.”

Increasingly, electrification comes across as a viable alternative to get to the eventual emission reduction goal. Roychowdhury believes, “India certainly requires ambitious electrification target. Data indicates if you combine FAME and incentives given by state governments is addressing the TCO to a large extent.” According to CSE studies, the combination of FAME and state subsidies can actually help lowering price of electric two-wheelers by almost 25 percent. 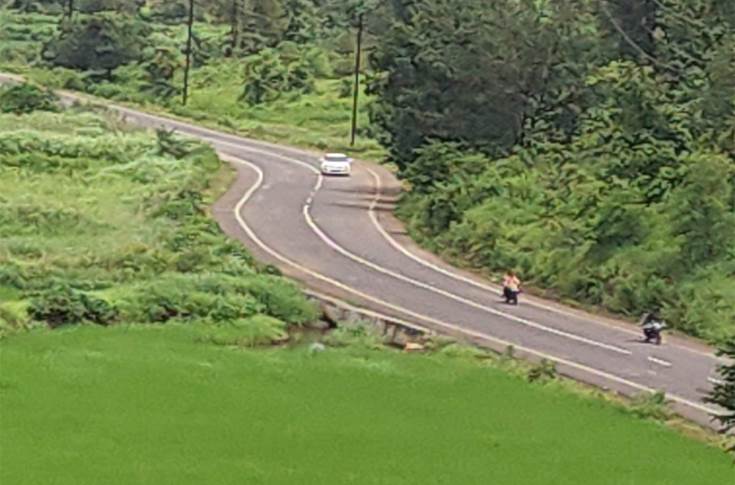 Charting the future strategy
Therefore, what can help expediate India’s race to net zero? Roychowdhury points out that a complete package of commitment and goals is necessary —
“l Target should define the boundary of investment for infrastructure development for public transport.
- Need to build compact cities
-Need to restrain personal vehicle usage by giving the right price signals
- High ambition for electrification is also crucial.”

Dr Dhawan’s list of priority for deep decarbonisation includes—
“l Focus on non-motorised transport, especially pedestrian infrastructure
- Magnify the reach and focus of EV policies
- Innovation in low-carbon technologies for heavy-duty long-distance segments
- Improve public transport services
- Enable a modal shift to railways and improve efficiency of logistics sector.”
The emission challenge is ultimately a zero sumgame. A resilient framework coupled with far-reaching policies and electrification of road transport is being seen as the fastest channels to make net zero a reality.