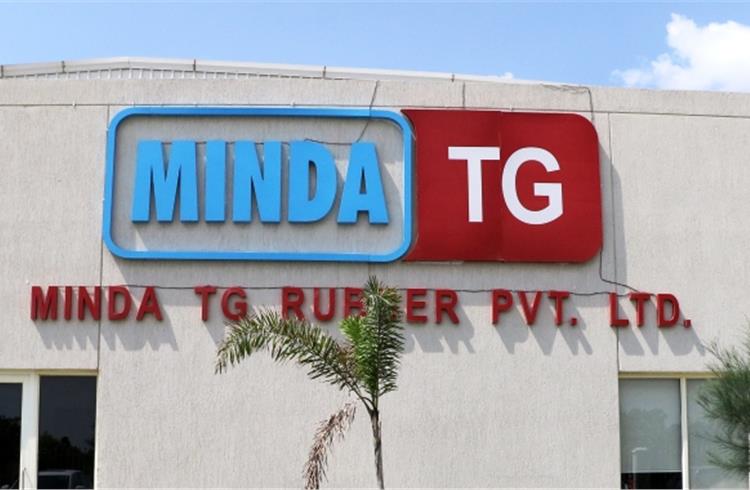 Bawal, the small township nestled in Haryana and home to a number of well-known component manufacturers, is fast evolving as a mini automotive hub. The multi-product UNO Minda Group, which has seen steady growth in this region, set up an ancillary unit of Minda TG Rubber last year.

A JV between UNO Minda, Toyoda Gosei Co and Toyota Tsusho Corp of Japan, the JV company started operations at Bawal in September 2015. Earlier in 2011, Toyoda Gosei and Minda had floated a JV – Toyoda Gosei Minda India – for producing safety systems including airbags for which a manufacturing facility was set up at Neemrana in Rajasthan.

UNO Minda holds the majority stake of 51 percent in this latest JV with the Japanese partner holding the balance. The company’s Bawal plant supplies hoses for two key made-in-India models – the Maruti Baleno and the new Toyota Innova Crysta.

Twin varieties of hoses are made at the Minda TG Rubber plant – brake hoses deployed in braking systems and fuel hoses that are harnessed in the fuel system. Different rubber hoses carry fuel from the fuel tank to the engine in the fuel system while others, of a high-pressure variety. help the fuel system with evaporation of vapour and are clubbed as low-pressure hoses. The company makes both types. Brake hoses are connected to the caliper of the brake system which carries the brake fluids. RS Gupta, managing director of Minda TG Rubber, told Autocar Professional on a recent visit to the plant that the company’s hoses are capable of a higher number of cycles and are more durable than those of rivals. Being high technology products, these hoses are designed to customer specifications and customised to engines and associated fuel systems.

The Bawal plant, which is spread across 9,300 square metres, has a constructed area of 1,300 square metres, which means there’s adequate room for expansion. At present, the facility uses 35 percent of its capacity but is targeting full capacity utilisation by 2019-20.

Minda TG Rubber has recently made a foray into the two-wheeler business, given that its collaborator does not supply hoses for this sector. The company has bagged a new order, worth Rs 9 crore per annum, from a two-wheeler OEM and is currently developing brake hoses that will be supplied in 2018.

Another export order involves supply of vacuum hoses to Toyota in Europe and is slated to commence by the end of this fiscal year. “With the new set of regulations in safety and emissions on their way, the focus will now be on low are ready to meet those requirements,” says Gupta.

The brake hoses also meet the new combined braking system regulations in the country, so large volumes for brake hoses are expected in the future as demand peps up. As a result of the growing business in hoses, Minda TG Rubber is targeting a topline of Rs 125 crore by 2019-20, up from the current Rs 33 crore. 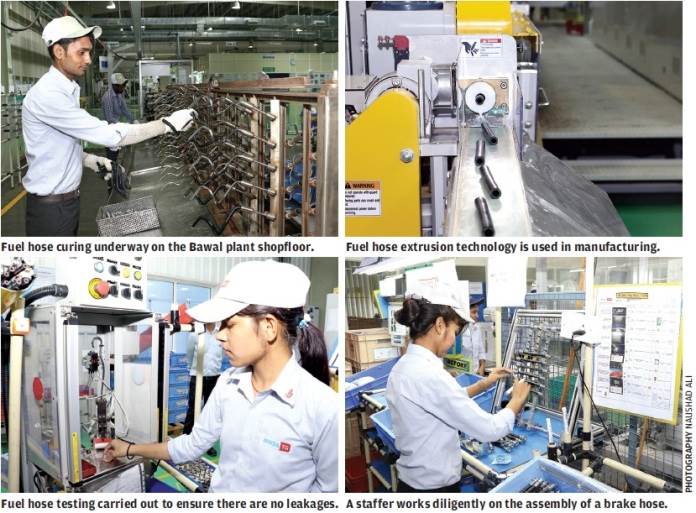 Also for the future, a feasibility study is underway for adopting a more advanced plastic extrusion methodology of production as at present rubber extrusion is the technology employed. Plastic extrusion will lead to ultra-low permeability in hoses and, based on customer requirements, will be adopted in the long-term.

The transition from rubber to plastic products will make the end product lighter albeit it may not ensue in cost savings. While the weight reduction in the end product is touted to be around 20 percent in some cases, not many OEMs have shown much inclination towards this manufacturing process in the absence of cost reductions.

Upcoming trends in this product line sees brake hoses moving towards lower expansion as with high pressure flow of fluids, they tend to expand and in turn weaken. Hence, Minda TG Rubber is designing its hoses for lower expansion and plans to introduce a lower expansion hose in India in 2018. It will prove to be more durable leading to improved brake performance and cost effectiveness. The product is currently made by Toyoda Gosei, its collaborator and the JV company plans to localise it in India.

In 2015-16, Minda TG Rubber imported almost 100 percent of the hose parts. It has now installed a localisation line and is gunning for 50 percent localisation in brake and fuel hoses at Bawal. Since the basic rubber compound is imported and will continue to be imported in future as well, the company is undertaking a manufacturing process that will enable 25 percent local content by 2017.

The company’s focus is on passenger cars as it is dealing with safety- critical parts for which vast experience is necessary.

The company has under its belt product evaluation capability and except for durability testing, the ability to undertake most of the chain management and configuration changes is taken up at the local R&D centre. With customisation and localisation available in-house, for long-term durability testing it is dependent on its collaborator.

Key competitors include Brakes India for brake hoses besides Flexitec Hose Solutions and TRW globally. In fuel hoses, Sumito Rico dominates the market while Minda TG Rubber has less than 10 percent share but is optimistic of growing this to 30 percent by 2019-20. In brake hoses, Brakes India monopolises with a 75 percent share but Gupta is bullish that despite stiff competition, orders for new models would come its way as it has moved faster on the localisation front and is offering cost-competitive products compared to its rivals.

The company buys its master compound from Thailand. At the Bawal plant, about 50kg compound is mixed in half-an-hour. The next process involves the making of hoses with one hose produced every 20 seconds as per customer needs. Manufacturing involves five processes – mixing, CHS, curing, assembly, packing and logistics and draws on 60 workers on the shopfloor. Since the Japanese manufacturing process is practised, chances of error are minimised. Different types of compounds are leveraged and following the extrusion process and moulding on the dies, the product takes shape.

Quite clearly, demand will rise for these products going forward as regulations mandate and push the facility to optimise capacity utilisation.