As more and more OEMs in India look to fit stylish, lightweight alloy wheels on their vehicles, the Bawal-based Minda Kosei Aluminium Wheel is looking to capitalise on the emerging demand. 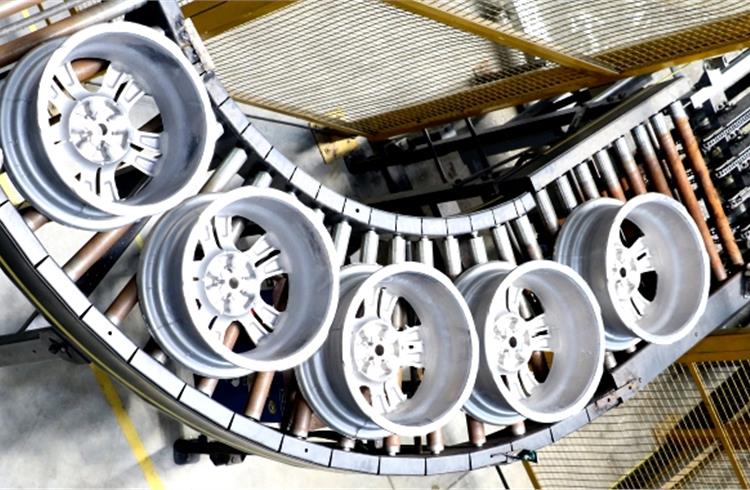 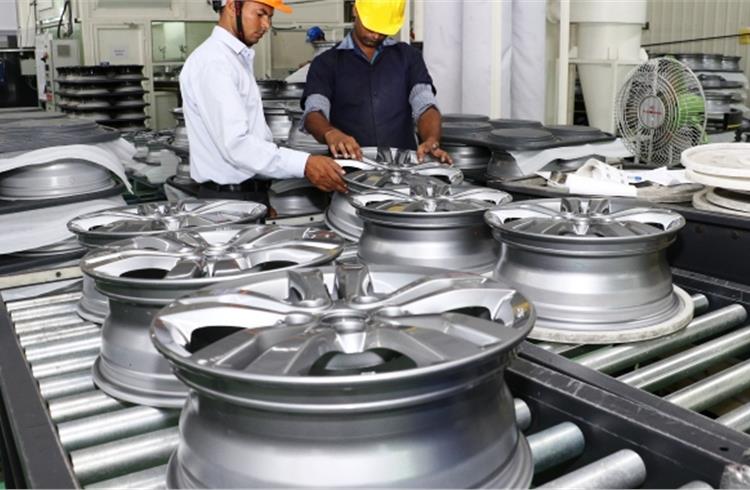 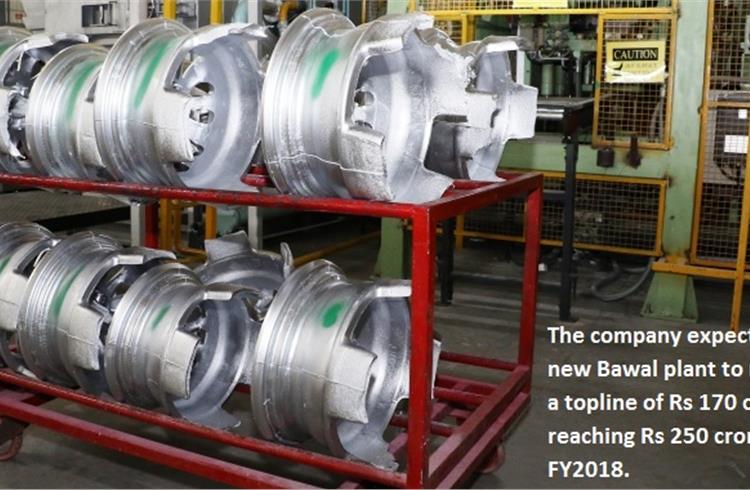 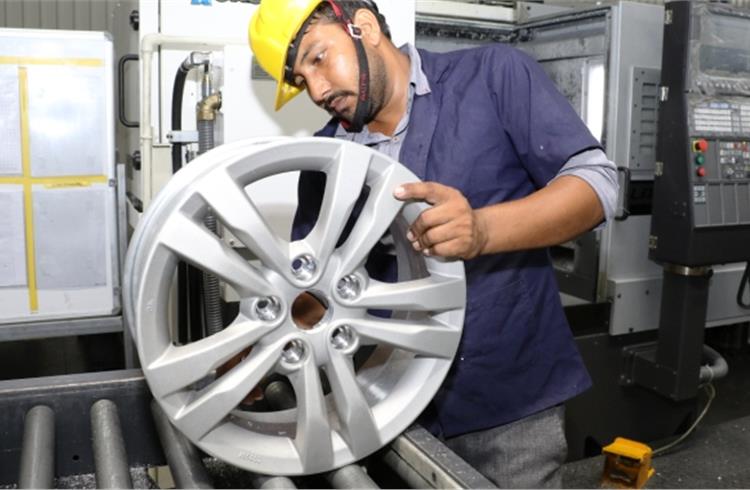 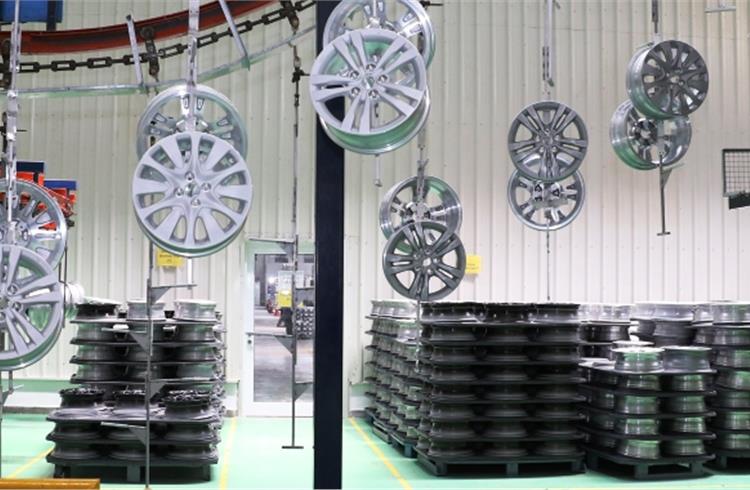 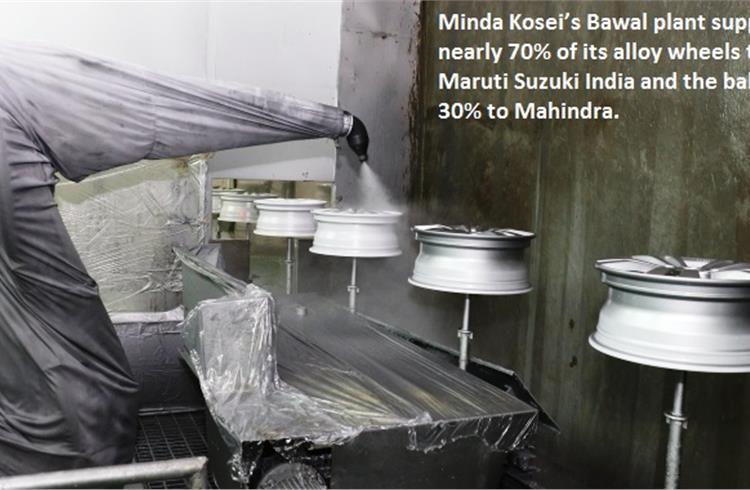 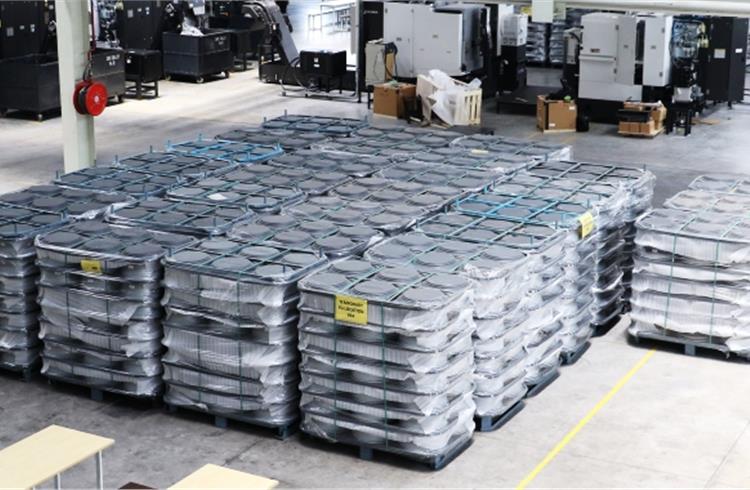 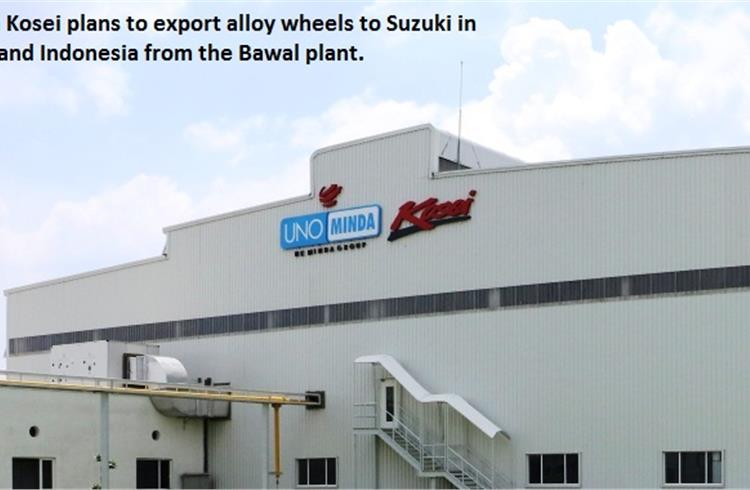 With growth returning to the Indian automotive sector, the multi-company, multi-product UNO Minda Group is on an expansion drive. Bawal in Haryana, where five group company plants are located, seems to be the Group’s India growth hub.

Targeting an overall investment of Rs 300 crore and installed capacity of 90,000 alloy wheels per month by January 2017, MKAWL has till date invested Rs 250 crore for a monthly production capacity of 60,000 wheels. While UNO Minda holds a 70 percent stake in the JV, the balance is with Kosei Aluminium Company, a major producer of alloy wheels in Japan.

Both the JV partners also have an alloy wheel plant in Chennai in which UNO Minda holds a 40 percent stake and Kosei 60 percent. In 2010, on inking their first pact, they had decided to set up a manufacturing facility in north India, in which UNO Minda would have the majority stake as Maruti Suzuki was to be the key client and Kosei did not supply to Suzuki Motor Corporation then.

Catering to big players in India

MKAWL’s new Bawal facility produces alloy wheels for Maruti Suzuki and Mahindra & Mahindra; while 70 percent of the supplies go to Maruti, the balance is for M&M. At present, the plant caters to 100 percent requirements of the top-end ZX and ZXi variants of the much-in-demand Maruti Vitara Brezza and 80 percent of the requirements for the premium Baleno hatchback. 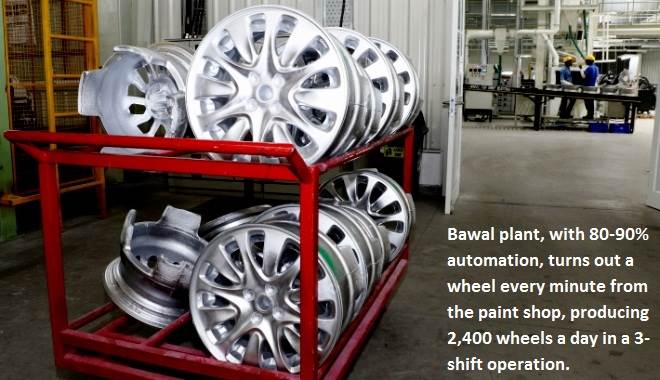 Alloy wheel production does not involve any assembly work per se but processes like casting and machining. The Bawal plant turns out a wheel every minute from the paint shop, producing 2,400 wheels a day in a three-shift operation with 100 workers per shift. The plant has about 80-90 percent automation and the sole imported raw material is the aluminium ingot. After going through the melting furnace and being formed on the dies, a wheel undergoes heat treatment to obtain improved hardness.

Special aluminium paint with resistance to salt involves a 17-tank cleaning process before being painted on two paint lines for the primer and final paint here.

Potential for new plants in Gujarat and Mexico

In the light of the growing market for alloy wheels in premium cars, the alloy wheel supplier is mulling setting up a third facility in Gujarat. As is known, Suzuki Motor Corp’s all-new plant in Gujarat is currently being constructed and is slated to roll out its first model in January 2017. MKAWL though will start production at its greenfield facility in Gujarat by September 2018 under an equal partnership with Kosei. In the interregnum, it will supply alloy wheels to Suzuki’s plant in Gujarat from Bawal.

But Naveesh Garg, managing director of Minda Kosei Aluminium Wheels and CTO of UNO Minda Group, told Autocar Professional on a recent visit to the Bawal facility that the Gujarat plant is still in the discussion stage with a final decision to be taken this December. Once it goes on stream, it will also cater to Ford India, General Motors at Talegaon, Volkswagen and Tata Motors.

Meanwhile, the supplies of alloy wheels for the Mahindra KUV 100 SUV have commenced from the Bawal plant. MKAWL is also developing alloy wheels for other existing Mahindra models including the Scorpio facelift and the XUV 500. 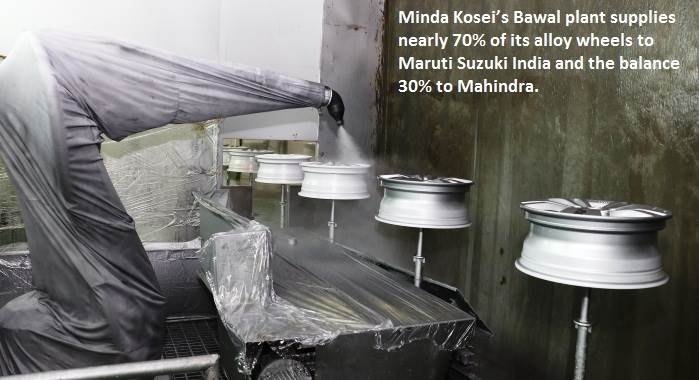 If the new alloy wheel plant is set up in Gujarat, it would be the second UNO Minda Group plant in the state after the Roki Minda facility that makes air intake systems. The new factory is expected to involve an investment of Rs 250 crore for production of 60,000 alloy wheels a month.

MKAWL is also exploring growth opportunities outside India. For instance, Mexico could be the site for a new plant after the Gujarat unit is set up. Kosei, which has bagged big-ticket business for alloy wheels from Honda and Nissan in the USA, is exploring the potential for a JV facility with UNO Minda in Mexico where labour costs are comparatively low compared to the USA.

Mexico is an emerging automotive market with its government offering incentives to companies for setting up a manufacturing base there. Also, thanks to a Free Trade Agreement between Mexico and the USA, supplies across the border to the USA will be hassle-free.

As regards catering to the ASEAN market, Kosei’s factory in Thailand already supplies to key customers Honda and Toyota there. “We plan to export alloy wheels to Suzuki in Japan and Indonesia from the Bawal plant and are also exploring a buyback option by Kosei Japan which will, in turn, sell to its customers there. Exports will start in 2017-18 from Bawal and will initially be to the tune of 10-15 percent of the total production,” says Garg.

OEM demand for alloy wheels is currently on the rise, thanks to their light weight and stylish looks. While an alloy wheel weighs a third of a steel wheel, it is at least three times more expensive. But that has not deterred customers going in for them.

“As India did not have adequate alloy wheel capacity, carmakers were using them only for premium models till now. However, with many players entering this segment and setting up manufacturing plants, they will come in lower variants as well,” adds Garg. Among other suppliers of alloy wheels are Synergies Castings, Enkei Cast Alloys, Deltronix and Steel Strips Wheels which has recently forayed into the sector.

Demand for alloy wheels in India is expected to be on the upswing and pitted to grow by 20 percent yearly. At present, they account for just 15-18 percent of the 2.7 million passenger vehicle market in India and are worth Rs 1,200-Rs 1,500 crore. In comparison, alloy wheels command 98 percent of the market in Thailand, and 60-70 percent in the US, Europe and Japan. With the Indian passenger vehicle market tipped to grow to 5 million by 2020, the opportunity for suppliers is huge.

MKAWL expects the new Bawal plant to muster a topline of Rs 170 crore, reaching Rs 250 crore in FY2018. It also helps that manufacturing capacity can be expanded to 120,000 units, at an additional cost of Rs 50 crore, using the existing vacant land available in the plant.

With passenger vehicle sales ticking along nicely this fiscal and slated to cross the three-million units mark for the first time, the company, which has the country’s largest carmaker as its biggest client, will be well placed to meet the burgeoning demand for alloy wheels.