To date, indirect cooling systems have been found primarily in passenger car applications. 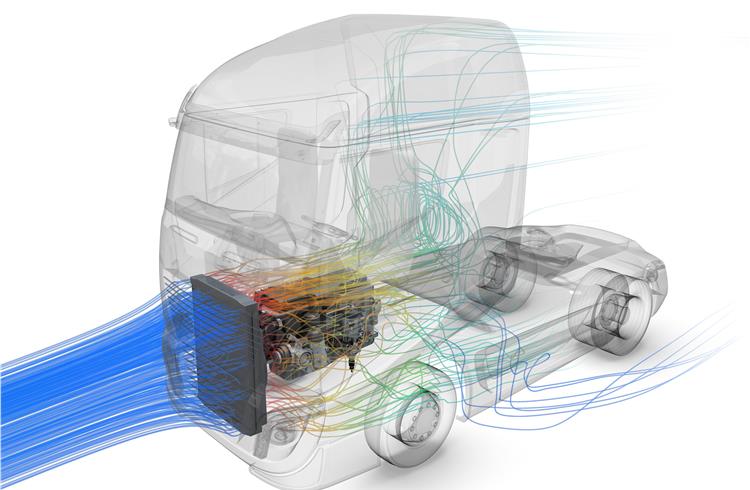 With the introduction of the Euro VI emission standard (in Europe), many innovations were needed in the cooling system and its components in order to meet the additional requirements for cooling capacity without increasing fuel consumption. Radiators, charge air coolers, and EGR coolers with high power density, fan drives with high control accuracy, and for the first time, a Visco drive for the coolant pump are typical examples. While the components and their interaction have been optimized, the direct cooling system architecture established since 1980 has remained—with a few exceptions—relatively unchanged.

With direct cooling, the essential cooling functions are performed by directly air-cooled individual components in the cooling module. These are typically the air-conditioning condenser, the charge air cooler, and the radiator. Changing to an indirect cooling system promises another significant improvement in the vehicle cooling system, the core of which is indirect charge air cooling. It is now increasingly becoming the standard for passenger car applications, but until now its use in the commercial vehicle market has been limited to two-stage turbocharging. Such an indirect cooling system has significant benefits for commercial vehicles with single-stage turbocharging systems as well. Potential advantages include lowering fuel consumption, increasing the installed cooling capacity, and substantially reducing the complexity of integrating future cooling tasks into the vehicle.

In current commercial vehicles, the cooling module consists essentially of the air conditioning condenser, the charge air cooler, and the radiator. Depending on the level of equipment, various other cooling tasks are also necessary, such as cooling of transmission oil, power steering oil, compressed air, or in the future, of the electric drive, power electronics, and the battery of a hybrid powertrain. In a conventional direct cooling system, additional air-cooled coolers handle these tasks, sometimes even with their own dedicated fans. The purpose of an indirect cooling system is to significantly simplify the heat sink and thus the cooling module. It then consists of just a low-temperature radiator (LT R) and the existing high-temperature radiator (HT R). In addition to simplifying the cooling module, the benefit for the vehicle is that the cooling capacity of the LT R can be distributed as needed among the individual cooling tasks. This results in a better ratio of installed cooling capacity and pressure loss in the cooling air flow. For the systems and media to be cooled, the benefit is that local cooling has functional advantages, because the lines are shorter and the fill levels can be reduced. Control of the cooling capacity on the coolant side is thus simplified.

The core of the indirect system is indirect charge air cooling. In this configuration, coolant is cooled down to almost ambient temperature by means of a low-temperature radiator. This coolant is used to cool the charge air in a charge air/coolant cooler, which is mounted on the engine. An indirectly cooled condenser, low-temperature EGR cooling, and cooling of a potential hybrid powertrain are all conceivable as further development stages.

In addition to charge air cooling and air conditioning, there are additional cooling tasks that require a low temperature level. They will increase further in the future, for example, by cooling a hybrid powertrain with power electronics, electric drive, and battery, intercooling of a two-stage turbocharger—particularly with respect to further downspeeding—, recooling of an air conditioning system powered by waste heat, or low-temperature EGR cooling. With an indirect system, this does not require any changes to the cooling module architecture. The additional heat sources are incorporated in the existing LT circuit. This is possible because the maximum quantities of heat are not all required simultaneously. Even the wide range of variants used in commercial vehicles can be implemented simply with an indirect system. In a direct system, the additional effort required is substantial.

The use of a charge air cooler with an LT R reduces the installation depth of the cooling module, which can be used for improved flow rates. If the direct condenser is also replaced by an indirect version, then the cooling air flow is dethrottled further.

Dethrottling allows the amount of cooling air to be increased by over 10 percent. This allows the fan switch point to be shifted to a higher torque, and reduces the installed fan capacity. This benefit opens the way for higher engine outputs or for additional future cooling capacity needs. The higher thermal inertia of the overall system reduces the number of times the fan is switched on under brief loads.

In order to understand how the positive properties of indirect charge air cooling affect emissions, fuel consumption, and torque, the system was investigated on a representative Euro VI engine. Because conventional charge air cooling is part of the vehicle cooling system and is air-cooled, it was necessary to represent these conditions on the engine test bench as well, in order to compare them with an indirect charge air cooling system. Various transient driving profiles were considered for this purpose. The result showed potential consumption savings of about one percent due to improved cooling capacity as well as the transient effects.

During engine testing, the potential of indirect charge air cooling for thermal management was also investigated. At the low end of partial load, which is critical for catalytic converter efficiency, the outlet temperatures at the turbocharger are below 100°C, so that no boiling can occur. It is therefore possible to shut off the coolant flow and thus charge air cooling. As a result, exhaust gas temperatures can rise by over 20 K. This means that high-consumption measures for heating up the catalytic converter are not necessary, even at low ambient temperatures.

For Euro V EGR solutions, engine testing confirmed that fuel consumption can be reduced by two percent by means of a low-temperature EGR cooling system that can be implemented in the low-temperature circuit together with charge air cooling. Under Euro VI boundary conditions, this potential is reduced as a result of the combination with SCR. This in turn lowers EGR rates, but the savings are still about one percent according to the known trade-off curves. Altogether, the indirect cooling system provides a fuel consumption advantage of two percent for long-distance hauling, in addition to the advantages of vehicle integration.

The indirect cooling system provides benefits for vehicle integration, because variants can be manufactured more simply and future tasks can be integrated more easily. The benefits of a smaller package in the cooling module and better flow rates allow higher cooling capacity to be achieved, which can be used for improved cooling or higher engine output. The advantages in cooling capacity, pressure loss, transient behavior, and thermal management allow consumption to be reduced by about one percent. With low-temperature EGR cooling, a total of two percent is possible. In addition, the indirect system enables simple recooling of additional future measures toward reducing consumption, such as hybridization or air conditioning using waste heat. The indirect cooling system for commercial vehicles is therefore a valuable contribution to economic efficiency and security for the future.

With its three business units Engine Systems and Components, Filtration and Engine Peripherals, as well as Thermal Management, Mahle. All of the group’s nonautomotive activities are combined in the industry business unit with products from the application areas of large engines, filtration, and thermal management for industrial purposes. The aftermarket business unit serves the independent spare parts market with Mahle products in OE quality.

Mahle has a local presence in all major world markets. In 2014, some 64,000 employees at over 140 production locations and ten major research and development centres are expected to generate sales of around 10 billion euros (Rs 77,870 crore).

Illustration: The introduction of an indirect cooling system in commercial vehicles offers great potential for increasing efficiency and reducing complexity.