India's 125cc scooter market all ready for take off

With TVS Motor Co and Hero MotoCorp stepping into the premium league, and Honda and Suzuki expanding their presence with new models, the 125cc scooter market is all set to take off from FY2019. 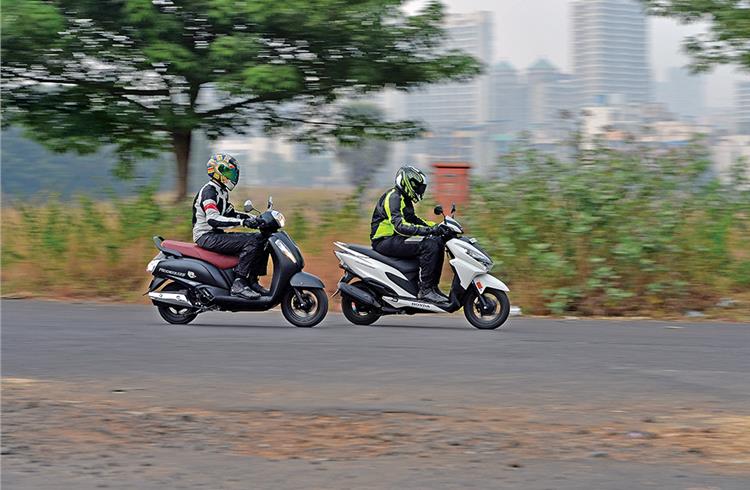 The scooter segment has been a major growth driver for the domestic two-wheeler market over the past few years and all major two-wheeler manufacturers are vying for a healthy share of this growing space.

To get some perspective, SIAM industry data reveals that in FY2012-13 the share of scooters stood at 21.19 percent of the overall domestic two-wheeler market. Barely two years later, it grew sizeably to 30.58 percent and 31.86 percent in FY2015-16 and FY2016-17 respectively. For the 10-month period of the ongoing fiscal (April 2017-January 2018), scooters have registered a share of 33.65 percent of the overall two-wheeler volumes in India. This also means that every third two-wheeler sold in India now is a scooter model. Industry experts have been forecasting that the scooter share will hit 40 percent of the total two-wheeler market in the foreseeable future. Sales of the Activa 125 have not been at par with Honda's initial expectations. It is now well supported by the Grazia.

The surging segment is also giving way to several sub-categories that are finding customers based on their varied preferences. For example, while Honda’s Activa remains the primary choice for most buyers as it is positioned as a family scooter, its Activa i and Hero MotoCorp’s Pleasure models squarely target independent female riders. Honda’s popular Dio is targeted at the young urban college goer, just like the Yamaha’s Ray Z models.

However, engines up to 113cc power almost 89-90 percent of this market. In December 2016, Autocar Professional had published a report ((December 15, 2016), which pointed at the expansion of the new sub-segments within the scooter market. “The study estimates that the 125cc scooter category had a domestic market size of less than 500,000 units per annum in FY2016 on the conservative front. This segment (125cc scooter category), therefore, accounted for a share of less than 10 percent of the overall domestic scooter market in the last fiscal year. Our study forecasts that the 125cc scooter segment will grow by 100 percent, if not more, in FY2018-19,” it quoted.

This publication, based on the 10-month market growth in FY2017-18, estimates that the 125cc scooter market currently constitutes about 11.50 percent of the overall scooter market. This is closely aligned with the estimates from TVS Motor Company, which calculates the size to be about 10 percent.

In February 2018 alone, five OEMs have launched and unveiled six new 125cc scooters. TVS Motor and Hero MotoCorp have just forayed into the category for the first time with NTorq and Maestro Edge 125 / Duet 125 respectively. Piaggio’s stylish Aprilia brand too has launched a 125cc scooter – SR 125 – and unveiled the Storm at the Auto Expo. Meanwhile, Suzuki unveiled the Burgman Street for the India market at the mega event.

Manufacturers gun for the growing market

The Honda Grazia took no time to become one of the top 10 bestselling scooters in the domestic market within a month. In January 2018, the model garnered sales of over 22,500 units, clearly indicating that it is strongly supporting the Activa 125, which apparently failed to deliver as per the company's expectations.

Launched at a starting price tag of Rs 58,133 (ex-showroom, Delhi), the Honda Grazia has already sold more than 60,000 units since its launch. At Rs 58,750 (ex-showroom Delhi), the new TVS NTorq 125 is aggressively priced, despite offering many industry-first features in India. It's a strategy to make quick inroads in the market.

Suzuki Access 125 — the forerunner
The Grazia's arch rival, the Suzuki Access 125 continues to sail with soaring numbers month-on-month. The Access 125, one of the most trusted models in the scooter market, has spearheaded the 125cc scooter category in India. It continues to grow with average sales of more than 33,000 units per month so far in this fiscal. 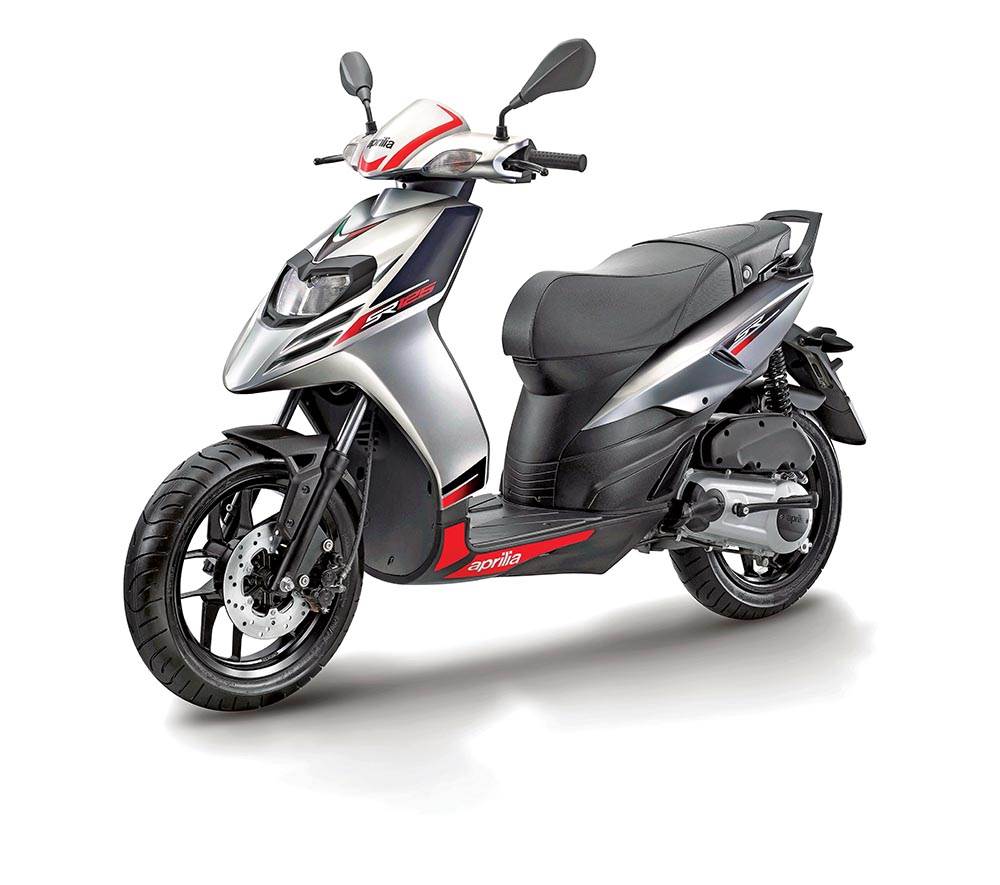 To take on the market leader, and to differentiate itself as a premium player – a lately altered strategy that it deploys in India – Suzuki Motorcycle India recently unveiled Burgman Street at the Auto Expo. While it will be Suzuki’s most premium scooter for India, the company also brings in its globally popular Burgman brand to the local market. Although the launch timeline for this model remains unclear at the moment, the Burgman Street will borrow the Access 125’s powertrain, thereby further consolidating its premium scooter portfolio. The incoming Suzuki model is understood to expose customers in India to an all-new global design language and features – critical for the maturing market. This also means that the model will sit atop the Access 125 in Suzuki’s India portfolio.

TVS NTorq
TVS Motor, India’s second largest scooter player, has recently launched its 125cc scooter named NTorq targeting young city commuters. The company has developed an all-new three-valve 124.8cc engine inspired from takeaways from TVS Racing. The company has also equipped the model with several connectivity features (under SmartXonnect) and claims that the NTorq is India’s first scooter with Bluetooth connectivity. TVS Motor, which has launched the NTorq at an ex-showroom, Delhi price of Rs 58,750, is gradually rolling out the model across regions. It is targeting sales of 200,000 units of NTorq in its first year of production. Aprilia Storm among the most stylish scooters on display at the Auto Expo. Piaggio plans to roll it out by H2, FY2019.

Commenting on this launch, Sudarshan Venu, joint managing director, TVS Motor Company, had said, “TVS Motor Company has always placed utmost importance on developing products, which are aspirational for customers.  With the NTorq 125, we have aimed on building an attractive product for the youth which is innovative and advanced.  With exciting design and smart features, we are confident that the NTorq 125 will carve a niche in the scooter segment across the globe.”

Hero Maestro Edge 125 & Duet 125
Hero MotoCorp recently revealed its model offensive for the growing 125cc scooter market. It aims to roll out the Maestro Edge 125 and Duet 125, both designed and developed at its Jaipur-based R&D facility. The company plans to launch both the models by Q2 FY2018-19. 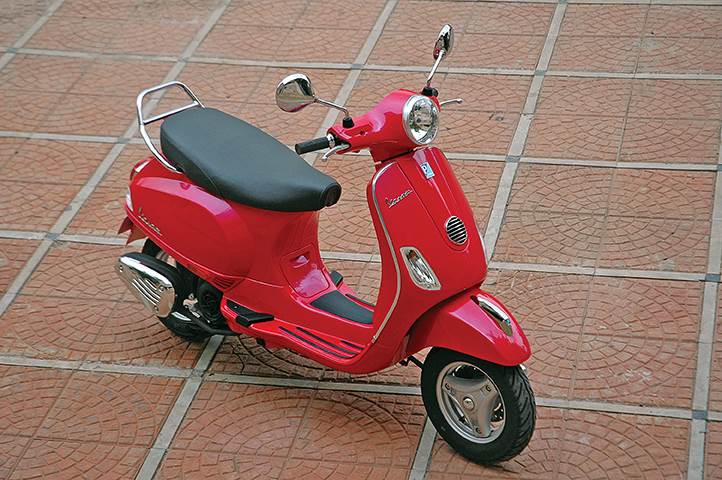 The Vespa 125 (along with the Vespa 150) continues to be a lifestyle product as they sit atop all scooters in the market. Thus, their monthly sales continue to remain on the lower side.

Both models are going to be powered by Hero MotoCorp’s in-house developed new 125cc, 8.7bhp motor. While Maestro Edge 125 will be positioned for the young and urban riders, the Duet 125 will target the family segment with sober and cost-effective packaging (for example, no front disc brake unlike the Maestro Edge 125).

Aprilia SR 125 & Storm
At the Auto Expo, Piaggio’s Aprilia brand too rolled out the SR 125 scooter, which once again targets the growing demand from the urban youth.

Explaining the intent of rolling out a smaller sibling to the Aprilia SR 150, Diego Graffi, CEO and MD, Piaggio Vehicles (India) said, “We had launched the Aprilia SR 150 in India just 18-20 months ago. The response from the customers here has been very impressive. So that took us to the decision of introducing the 125cc version (Aprilia SR 125), which still follows the typical fun-riding philosophy of the Aprilia brand combined with more affordable engine solution. The SR 125 is suitable for the aspirational customers who want to own the Aprilia brand, and are looking for a stylish and affordable scooter. It offers wider seat for comfortable riding.” 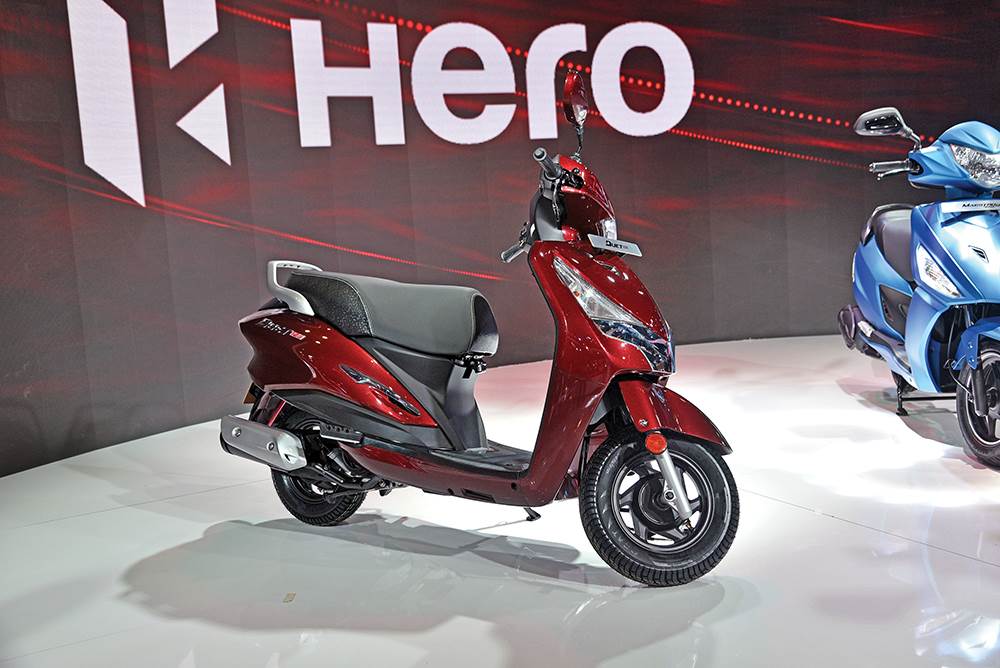 Aprilia also unveiled the 125cc Storm model, which is based on the SR series. The Storm particularly stood out among many exhibits at the Piaggio pavilion at the Auto Expo, thanks to the vibrant colours, graphics and the customized accessories the model displayed. 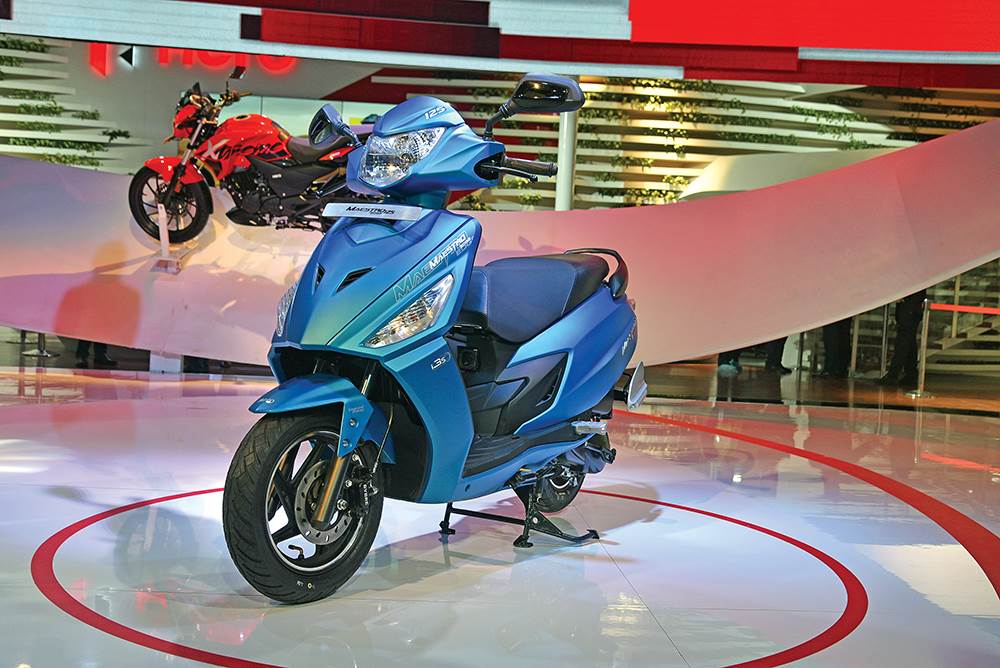 Duet likely to be the most affordable 125cc scooter.

“The Aprilia Storm is something very new and very unique (for India). It is not only for the young riders but also for those who feel young at heart. It has got wider tyres and an attractive design language,” added Graffi. The Aprilia Storm was one model, which had senior R&D officials from Hero MotoCorp and TVS Motor checking it out at the mega event. Company officials say that the Storm model will be rolled out in H2 FY2018-18 for retail.

All eyes on the 125cc segment
The 125cc scooter segment is about to take off with several new products entering the market. Hero MotoCorp and TVS Motor’s large dealership network is expected to play a key role in helping the category penetrate further and expand faster in near future. With the kind of features on it, the Hero Duet 125 could be the most affordable 125cc scooter in India market. 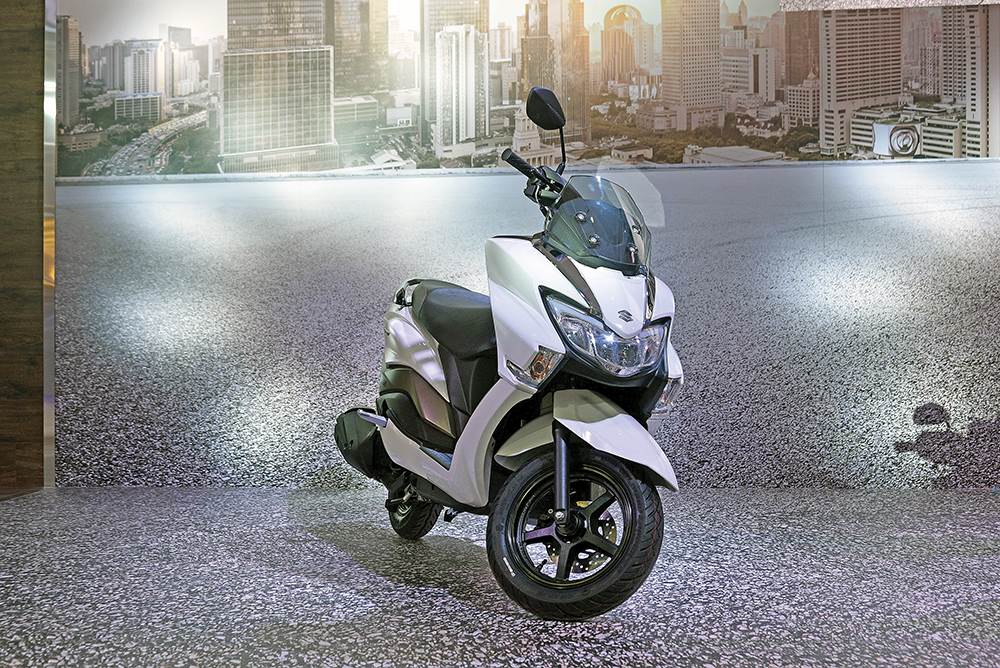 On the other hand, the TVS NTorq could quickly gain traction, all thanks to its brilliant pricing despite many first time features it has on offer, for example, the NTorq’s smart connectivity features.

Even Piaggio Vehicles India has unveiled its plan of equipping its new and existing scooters with connectivity features by mid-2018. The company launched a mobile connectivity app, which empowers riders to operate and control features of its Vespa and Aprilia scooters. 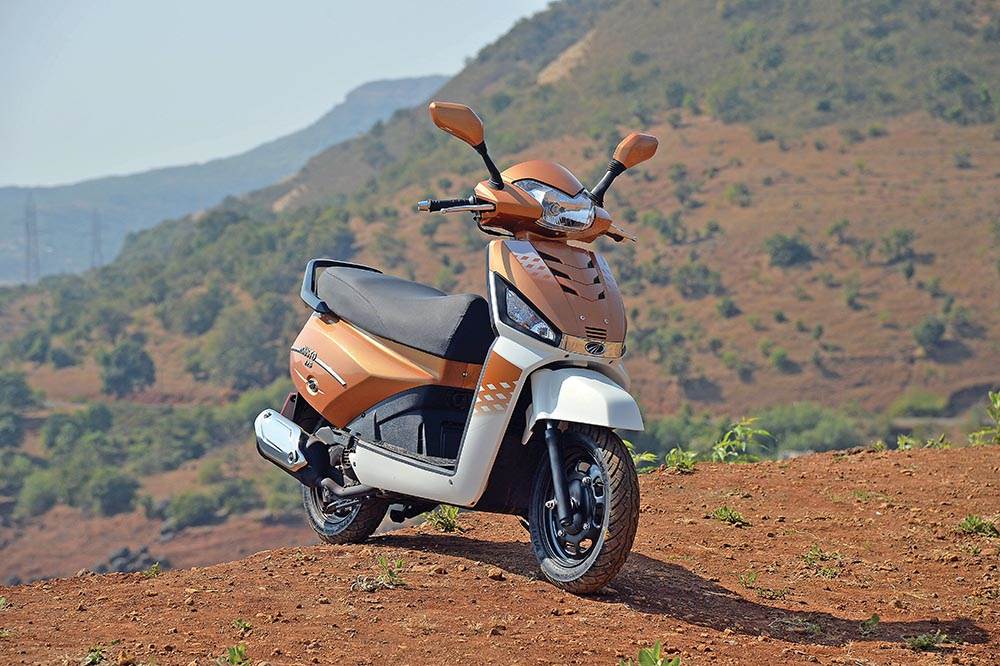 Mahindra Gusto is the sole 125cc scooter with depleting numbers. That's because the company has withdrawn from the mass market.

While Vespa and Aprilia, along with Suzuki Burgman Street (once it comes in) will continue to sit atop the 125cc scooter market, Honda, Hero, TVS and Suzuki will continue to fight it out in the volume segment. FY2018-19 will mark a maturing year for India’s 125cc scooter segment, which in turn will help further accelerate the already robust sales in the domestic scooter market.

(This article was originally featured in the March 1, 2018 issue of Autocar Professional) 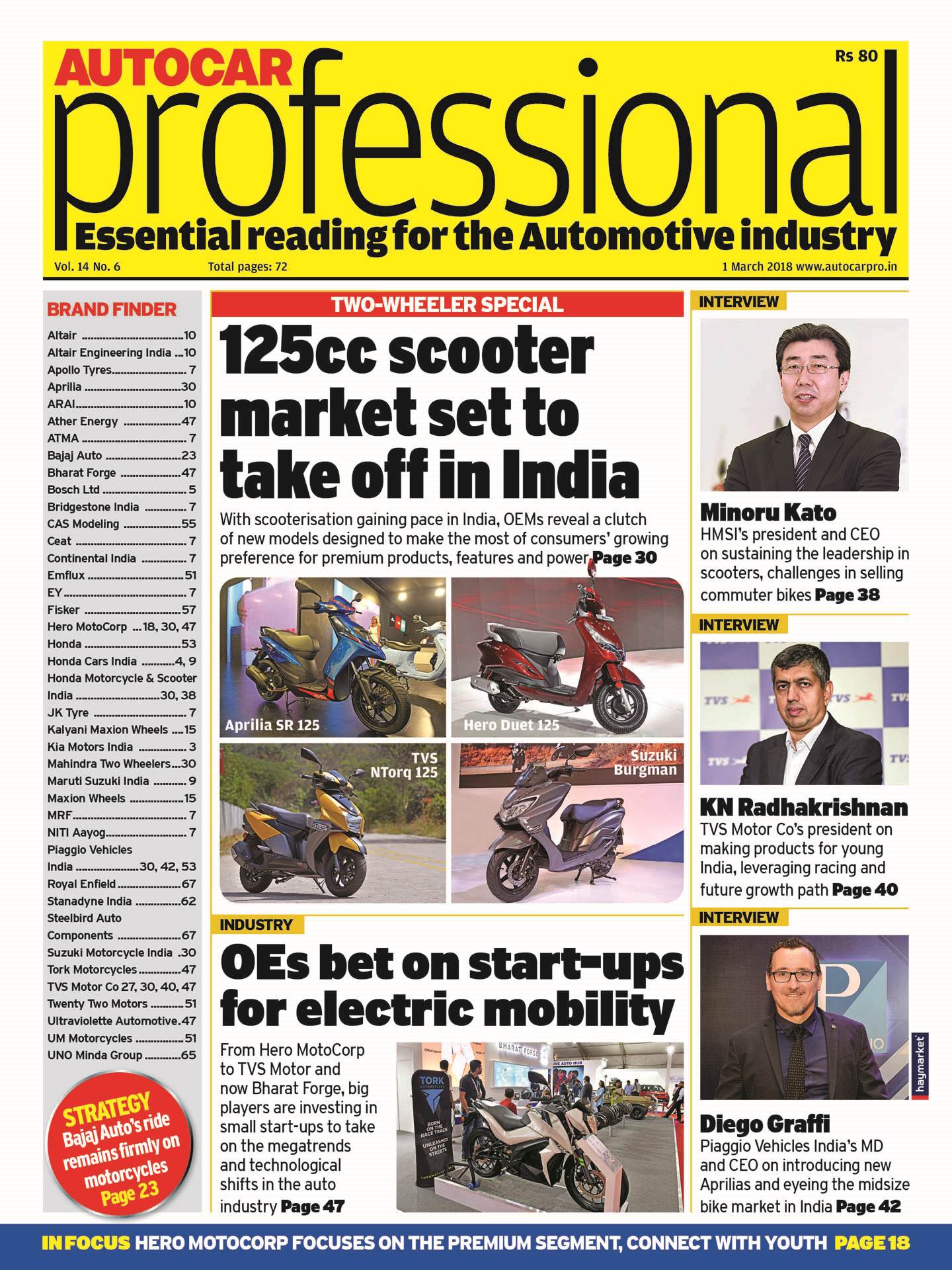