India to be export hub for Honda’s 1.6-litre diesel powerplant

The new 1.6-litre powerplant will see its engine block, engine head and crankshaft being produced in-house at Tapukara, from its state-ofthe art powertrain division. 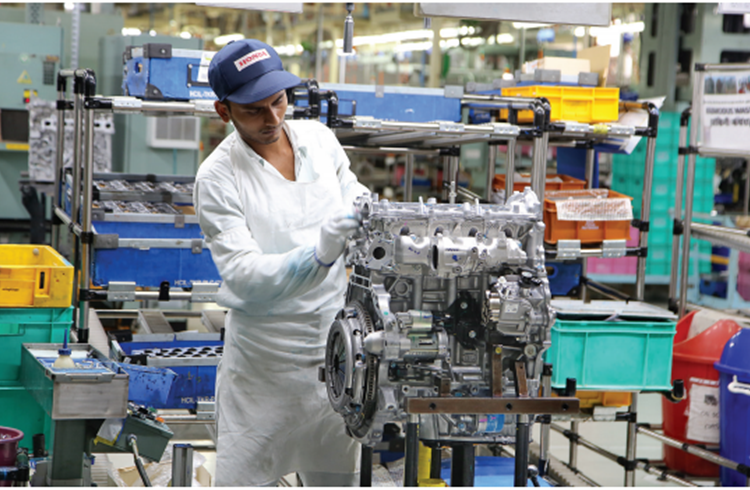 The new 1600cc, fourcylinder diesel motor from the company’s Earth Dreams series of engines currently powers Honda’s latest fifth-generation flagship crossover, the CR-V which has been recently launched in Thailand. However, with the neighbouring Philippines also all set to get the latest CR-V as a CBU from Thailand, the diesel engines will be supplied to HATC from Honda India’s Tapukara plant as completely assembled units, starting July 2017.

Importantly, the newgeneration CR-V is slated for launch in India in CY2018 and will get the same 1.6-litre diesel engine, which would come mated to a nine-speed automatic transmission, marking the first diesel automatic for the company’s product offerings in the Indian market.

As a result, Honda Motor plans to streamline its Asia Oceania operations and utilise the fully-integrated engine component manufacturing and assembly facility at its second Indian plant situated in Tapukara, Rajasthan. The state-ofthe-art facility has been the largest diesel engine manufacturer in terms of volumes in Honda’s global business

The new 1.6-litre powerplant will see its engine block, engine head and crankshaft being produced in-house at Tapukara, from its state-ofthe art powertrain division.

The Tapukara plant, which has an annual capacity of 120,000 cars, scalable to 180,000 over three shifts, currently, operates on a two-shift basis, manufacturing 480 engines daily, comprising the 1.2-litre and 1.5-litre petrol, as well as 1.5-litre diesel engines that power Honda’s Indian passenger vehicle models.

Thanks to an in-house forging shop and diecasting shop, the company is self-reliant for the crankshafts, engine blocks, cylinder heads and transmission cases. 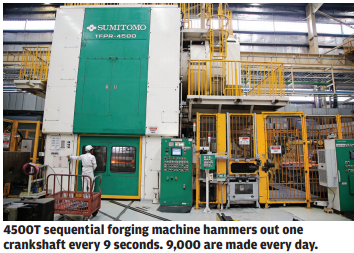 The forging shop is responsible for the ground up manufacturing of crankshafts and sees heat-treated ferrous billets at 1,200deg C being fed in a single 4,500-tonne sequential forging machine. With a cycle time of nine seconds, 9,000 crankshafts are produced per day and lifted up through a pulling conveyor to be passed through a surface cleaning process, and handed over straight to three machining lines. The finished parts are either supplied for internal consumption or are packed and stored for exports.

Unlike crankshafts, Tapukara does not forge connecting rods on its own, but does the machining of forged rods, which are being procured from Sanjo Forge, located close by in the Neemrana industrial belt. 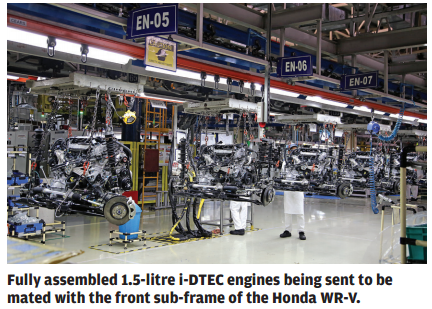 Honda’s product line-up sees its entire range of i-VTEC and i-DTEC engines on offer being aluminium ones, which are inherently lightweight and high on efficiency. The blocks and heads of these motors are also manufactured in-house at the aluminium die-casting shop in Tapukara, which is divided into three sections – high pressure die-casting (HPDC), low pressure diecasting (LPDC), and a spincasting area. 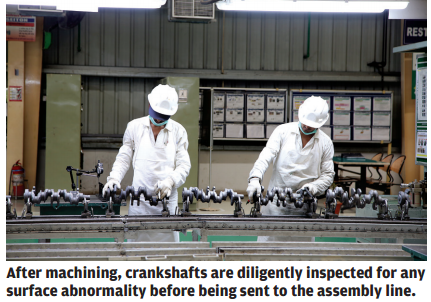 The combined capacity of HPDC and LPDC tips at 1,200 parts per day, and the shop makes engine blocks and cylinder heads for the 1.2L and 1.5L petrol, 1.5L diesel motors, as well as transmission cases for all these engines.

The cylinder head also requires going through the adjoining spin casting bay, for holes to be pinned in the component, making cutouts for the engine valves and springs, which would be incorporated at a sub-assembly station later. The rough-casted parts are then machined in high-end Japanese and Indian CNC machines from the likes of OKK & Matsuura, DFW and AMS, for the finished parts to be produced.

All the aforementioned in-house engine components, along with the vendor-procured parts are then brought to the assembly engine line for the complete powerplant to take shape.

The process begins with punching of the unique engine number on the block, with other parts getting sequentially installed at subsequent stations on the assembly line. Constituents like pistons, connecting rods, crankshaft and cylinder head are installed first, before the chain case is applied with a sealer binding in between. With camshaft, ACG, belts and compressor also going in, the complete engine is now ready to be transferred to the main vehicle assembly line to be incorporated in the new car body.

Honda Cars India already exports finished crankshafts and connecting rods to its subsidiaries in Indonesia, the UK, Brazil, Mexico and Malaysia from the Tapukara plant.

With close to 225,000 completely in-house assembled five-speed manual transmission units being shipped to nine countries in FY2017, including Thailand, Indonesia, UK, US, Canada, China, Turkey, Brazil, and Mexico and other vendorsourced parts also included, the company registered a total components export business of Rs 1,140 crore in FY2017, recording growth of 157 percent since FY2014.

TRIUMPH OF THE MAKE IN INDIA PROGRAMME

With the company already exporting mass market cars including the Brio, Amaze and the City to developing markets like South Africa and Mexico, export of engines for the premium segment CR-V could be viewed as a major landmark for Honda’s Indian operations, in terms of maintaining and consistently improving its quality standards. Overall, it is yet another instance of Indian manufacturing and quality attaining top-notch global standards. A true Make in India story. 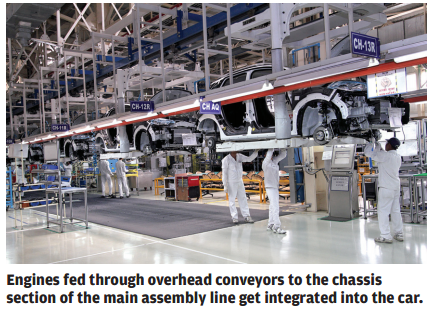 The assembly engine line at the Tapukara facility sees skilled manpower working in tandem with hi-tech machines, including 10-spindle multi nut runners as well as a total of six robotic sealant appliers. Each and every engine is tested for a leak check before being filled with engine oil and a batch sampling quality control takes care of random engines being test fired.

Honda also boasts of a state-of-the-art engine test bench (ETB) within the premises, having three dynamometers, ranging between 150KW to 330KW, to carry out various durability and high-speed tests for its engines and transmissions, for both its domestic as well export markets.

Going forward, it would be easy to surmise that the Tapukara plant will assume even greater importance in Honda's global growth game-plan as an engine manufacturing hub. This facility is already firing on all cylinders.

(This article was first published in the July 1, 2017 print edition of Autocar Professional)