Hyundai continues to bet on diesel for growth

Even as the general movement in the market is increasingly towards petrol, Hyundai claims gains from its stand to continue selling diesel vehicles in the BS VI regime. 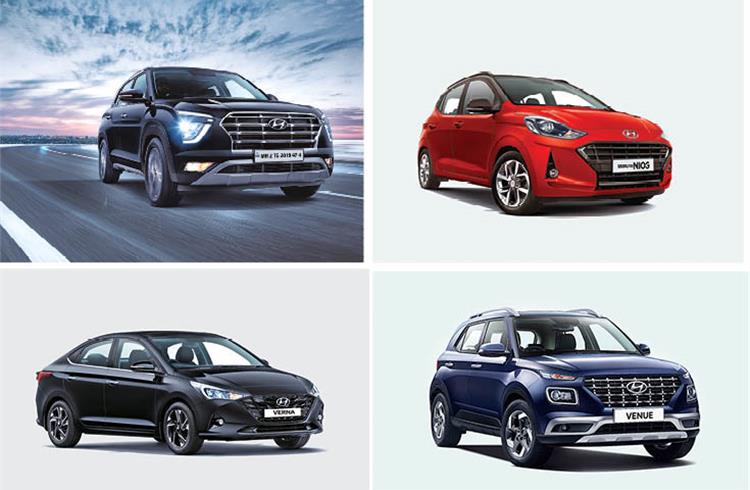 After being present in the Indian passenger vehicle market for over 23 years, Hyundai now wants to up the ante in what is considered as one of the toughest, if not the toughest, market in the world.

We as Hyundai want to be present in the consideration set of each and every car customer in the country,” Tarun Garg, director — sales marketing & service, Hyundai Motor India tells Autocar Professional. Diesel vehicles form an integral part of this strategy. Even as some OEMs reduced presence or exited the diesel segment from April 1, 2020, the start date of the stringent BS VI emission norms, Hyundai took a contra-stance of offering the diesel variant even in the hatchback car segment.

The call seems to be delivering the goods, mainly in ensuring that no diesel-only car buyer is a missed opportunity. That has also helped the Korean major achieve its best ever market share of 17.7 percent between January to August. The figure is just a shade higher than last year’s share of 17.3 percent with sales of 510,000 vehicles in the domestic market. The absolute sales volume during the current pandemic hit may be lower though.

“I think today our stand is vindicated,” says Garg, after sharing the market response to Hyundai’s diesel vehicles. The Tucson SUV, which sits at the top of its Hyundai Motor India’s portfolio, has garnered 75-80 percent sales from its diesel variant. Sizes 2.0L or more are expected to have a longer and better run in the market than the smaller engines. The Tucson comes with a 2.0L engine. Among the volume segment, the Hyundai Creta sees the highest number of sales from its diesel variant.  The midsize SUV has sold 40,941 units between January-August, of which 60 percent is from the diesel variant. The number drops for the models in lower segments. For the Venue compact SUV and the Verna midsize sedan, the share of the diesel variant stands at 32-33 percent each. The Aura compact sedan sees 10-11 percent of sales coming from the diesel variant equipped with a 1.2L engine. The same engine does duty in the premium hatchback Grand i10 Nios, which gets 5-6 percent of sales from diesel variant. So, how will it be sustainable for Hyundai to keep offering the diesel variant in a model? “We are okay even if a few customers want diesel in every segment. Why not?,” says Garg. Even if the share of diesel in models like Grand i10 Nios and Aura are not high, it’s still viable for Hyundai as both models share the same 1.2L diesel engine. The third diesel engine in Hyundai’s portfolio is a 1.5L, which is found in the Creta and Verna.

Diesel vehicles are usually bought for reasons like the thrill of driving which comes from the high initial torque they offer, and better fuel economy than petrol vehicles. And economics could also be at play favouring diesel vehicles especially in current pandemic times, feels Garg. “The price gap between diesel and petrol still remains at Rs 7-8 per litre, but more importantly, when the absolute price increases, it is the fuel efficiency that becomes all the more important. And diesel fuel efficiency is, depending on the model, 30 to 40 percent more than petrol. There’s a positive impact on operational cost too. There are so many advantages diesel brings to the table as well,” he says.

Garg is also betting on diesel to help Hyundai in meeting the CAFE (Corporate Average Fuel Efficiency) II norms which will kick in from 2022. Under the new regulation, the average corporate CO2 emission limit, which currently stands at 130 gm per kilometre, will come down to 113 gm per kilometre. Around the same time, RDE (Real Driving Emissions) norms will kick in. Both regulations could also hike technology cost further, mainly for diesel engines. Garg says it’s difficult to comment now on what could be the regulation-led cost repercussions and thereby the market scenario then, but says that the lesser-than-expected difference between a BS IV and BS VI diesel engine has helped the OEM. In the case of the Aura, the BS VI diesel variant was launched at a price difference of Rs 18,000 over the BS IV diesel variant of Hyundai’s other compact sedan, the Xcent.

“The data suggests so far that our decision for diesel is very much right. There are so many markets which are lapping up diesel,” says Garg, while adding that the national average of petrol-diesel may draw a different picture vs specific markets. “India is a big country, and there are pockets where demand for diesel is still very good. Suppose, in the Aura, if at an all-India level it is 10 percent (for diesel), there are markets where it is more than 20 percent,” he says. Among the top 5 PV selling states of Uttar Pradesh, Gujarat, Maharashtra, Karnataka and Haryana, the cumulative share of diesel vehicles stands at 31 percent, according to Hyundai. And among the top 5 city markets of Bangalore, Delhi, Hyderabad, Ahmedabad and Lucknow, the figure in favour of diesel vehicles is 24 percent. Hyundai’s top 5 markets for its diesel vehicles are, Punjab, Uttar Pradesh/Puducherry, Haryana, Madhya Pradesh, and Rajasthan, where the total diesel sales range from 41 to 56 percent.

The diesel strategy is playing a key support role in the OEM’s twin strategy of offering multiple fuels and powertrains. On the fuel side, it has petrol, diesel, CNG and electric. And in powertrains, it’s wooing customers with turbocharged engines and 5 types of clutch-free transmissions, in addition to the conventional options. What helps Hyundai Motor India in offering an array of engines and transmissions, and at competitive prices, is its parent Hyundai Motor Corporation’s engineering capabilities and global scale. And as electric mobility gains ground, that will be leveraged more.  “Kona was our starting point. In 3 years, we will be coming out with EVs for the high-volume segment as well,” says Garg.

As the main festive season begins this month, all strengths will be put to use to not only make the most of the period, but also recover volumes lost during the lockdown. Usually there’s a 15-20 percent uptick, if not more, during the festive season. Garg and team would look at making the most with the strategy to be “present in the consideration set of each and every car customer”.

This feature was first published in Autocar Professional's ​October 1 issue.