What really is a hybrid vehicle?

We take a close look at the main types of hybrids and the power sources they rely on. 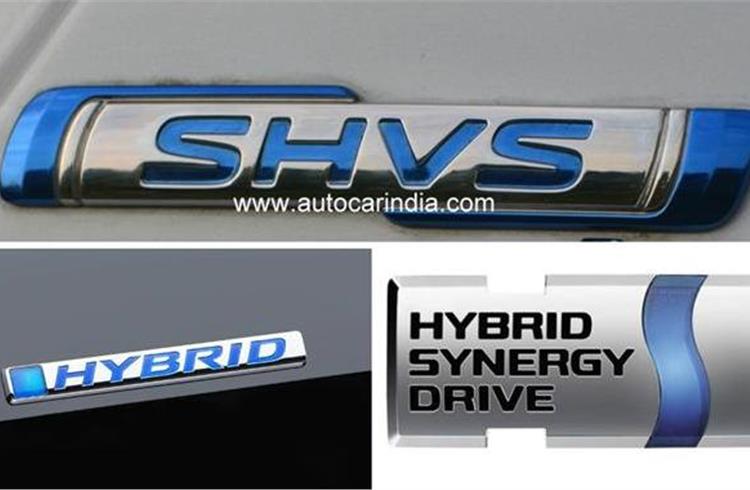 The classification of mild hybrids cars such as the Maruti Ciaz and Ertiga SHVS as hybrids led to the exemption of these cars from the recently concluded Delhi odd-even scheme. This gave rise to a number of discussions regarding the classification and actual meaning of hybrids. So for a clear demarcation, let’s take a look at the types on offer.

Generally speaking, vehicles combining two or more sources of propulsion are called hybrids. However, there are various types and degrees of propulsion that make all the differences.  We can classify them based on their assists as below:

These are vehicles in which propulsion is through the engine only, but when the vehicle is stationary or coming to a halt the engine is switched off automatically. The battery then powers the blower, music system, lights among other things. The engine automatically starts once the clutch pedal or accelerator is pressed.

These systems are smart systems and generally only engage when certain conditions are met, like the battery has sufficient charge, the HVAC system is capable of maintaining cabin temperature for a short while, engine is operating at optimum temperature, driver door is closed, etc.

This system is not regarded by some as a hybrid type as the propulsion is only via one source. However, some manufacturers like Mahindra in India market this system as a 'Micro Hybrid' and others like Mercedes-Benz call it ‘Eco Start Stop’

Mild hybrid vehicles have propulsion via an engine and an electric motor; the vehicle cannot be driven solely by the electric motor. The motor only assists the engine is certain driving conditions thus lowering the load on the engine and consequently fuel consumption and emissions.

In India, the Maruti Ciaz and Ertiga SHVS (Smart Hybrid Vehicle by Maruti Suzuki) are examples of this. The older Civic hybrid in India was also of this type.

Mild hybrids generally also include the start-stop functionality. Although regarded as hybrids these vehicles do not offer a comparable level of fuel and emissions reduction as full hybrids.

Depending on the vehicle model the batteries are charged via a plug-in socket, via the engine or both. The Toyota Prius, that is also sold in India, is an example of a full plug-in hybrid and is one of the most popular models available globally.