With its recently launched NAVI, a cross between a scooter and a motorcycle, HMSI is betting big on buyers taking to a dynamically styled two-wheeler. A report on the hybrid that will roll out of the company's Tapukara plant. 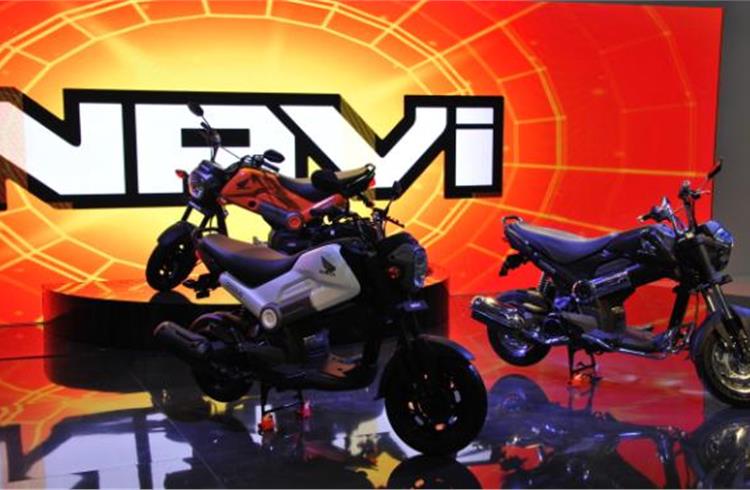 Fifteen new models in 2015 was Honda Motorcycle & Scooter India’s (HMSI) growth gambit last year. This year, it plans to launch five models of which four will be new editions of existing models. The talking point of the company’s exhibits at last month’s Auto Expo Motor Show 2016 at Greater Noida was its first fully India-designed and produced NAVI model.

To be made only in India for the Indian market, the NAVI kicks off a new category in the two-wheeler segment and is priced at Rs 39,500 (ex-showroom Delhi), one of the lowest-priced Hondas.

Is the NAVI a scooter, a motorcycle or a bit of both? HMSI has positioned it as a hybrid between a scooter and a motorcycle to cater to 18-24 year-old riders. The two-wheeler will be produced at HMSI’s Tapukara facility in Rajasthan with volumes to be flexed, based on demand. Subsequently, the company will explore manufacturing the NAVI in the company’s new scooters-only plant at Vithalpur in Gujarat, its fourth facility in India. The NAVI is meant to bridge the gap in Honda’s line-up where such a low-cost, crossover product was absent.

Recounting his directive to the R&D team at Manesar to develop a below-Rs 40,000 model, Keita Muramatsu, president and CEO of HMSI, said there were many discussions which followed with the R&D team about creating something new and with additional value for India.

Whether it was to be a motorcycle or a scooter was never defined. Based on this directive, work on the concept model commenced around December 2014. Young urban youth, largely trendsetters who did not want to mingle with regular riders, were to be the target customers with the NAVI pitched as a unisex product.

Interestingly, this all-new model was developed over a year, which makes it the product with the shortest development time from scratch compared to that taken by Honda globally. It helped that the technology was fully indigenised and there was 100 percent localisation content. 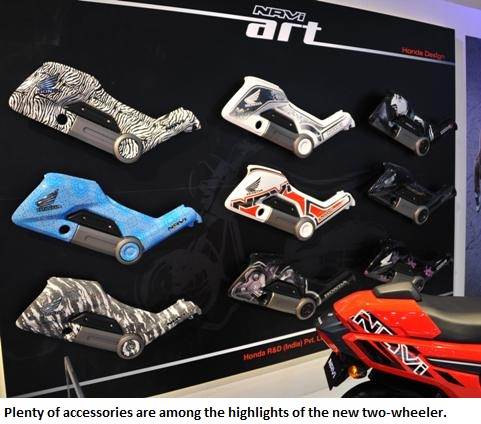 During concept discussions, the model was bandied as NAVI which, in Hindi, means new. The name was written on a board and many discussions later the R&D team found itself emotionally attached to the product name. Once its meaning was explained to Muramatsu, he warmed up to the nomenclature and the brand name of the upcoming model stuck.

“We entered the mass motorcycle segment with the Dream Yuga and then realised that India had one of the most youthful populations in the world. Therefore, the company’s product line had to find a connect with the youth. The same parallel was drawn for the NAVI. Since we are a manufacturer, we could connect with the product and that was the beginning of the NAVI,” he explains.

The NAVI, which is a made-for-India product, is powered by the Activa 110cc scooter engine. This engine employs Honda Eco Technology, which enhances fuel efficiency, and is complemented with an automatic transmission.  The NAVI though is built on a different chassis. “We changed the whole frame,” discloses Muramatsu, to deliver a new platform from which different models could emerge.

The NAVI is being pitched as a kind of a step-through or a full-sized scooter as one can hop onto it as on a scooter. HMSI’s marketing strategy looks to push the latest offering as a unique, personal two-wheeler that can be customised in colour as part of the customer’s fashion statement. It does not believe that the NAVI could cannibalise Activa or other automatic scooter sales as it targets a different buyer segment.

The NAVI was displayed at the Expo in different concepts – the NAVI Street, NAVI Adventure and NAVI off-roader which are set to roll out in phases. Easy bookings are facilitated through an android NAVI application. Deliveries are slated to commence from April 2016. 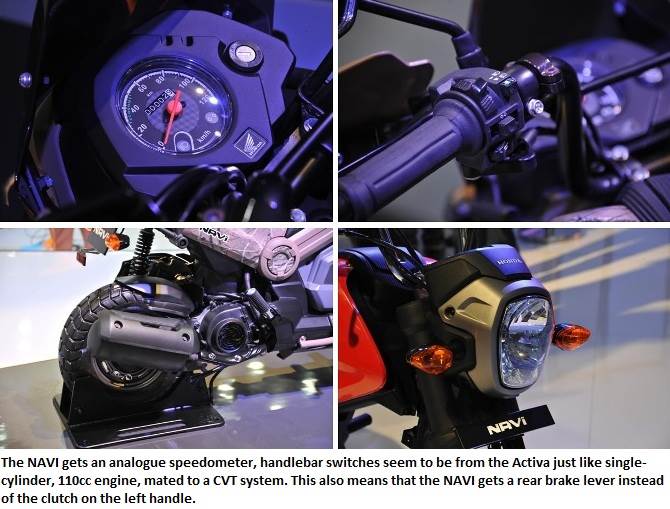 “For the first time, no sales target has been given to me. It is a new product, so let’s create a new market and a new segment for it. But we are prepared for manufacturing it as per demand,” adds YS Guleria senior VP (sales and marketing). “Initially volumes will be low but then based on demand it will pick up.”

The NAVI, which will be made only in India, will be complemented with a bunch of accessories with the customer given the leeway to pick and choose and customise his/her vehicle. On offer are a varied range of accessories like orange-and-white side panels as well as other colours with graffiti. Additional parts will be added to the accessory list in the next quarter for which Honda is collating consumer preferences.

Honda is parallelly working on NAVI II so that it can offer a brand new range of fun products on this platform to woo customers. The NAVI will be retailed through HMSI’s existing dealer network but Guleria says the ambience of the current showrooms will be upgraded and a funworld created within the outlet to promote the NAVI brand.

It’s just over three weeks since the NAVI was revealed and Honda says it is monitoring the demand for it. So far it is in receipt of around 500 bookings both through the NAVI App and dealerships. The NAVI will reach retail outlets in the first week of April.

Also read: NAVI gets 900 bookings, likely to have a waiting of 2-3 months

The other big news of the fortnight from Honda was the inauguration of its fourth manufacturing facility in India in Gujarat on February 17. The two-wheeler maker has invested Rs 1,000 crore in this plant with its 22 suppliers investing an additional Rs 1,100 crore for setting up ancillary units in the proximity. With the new facility on stream, Honda has generated a claimed 3,000 jobs with its suppliers providing indirect employment for another 6,000 people. 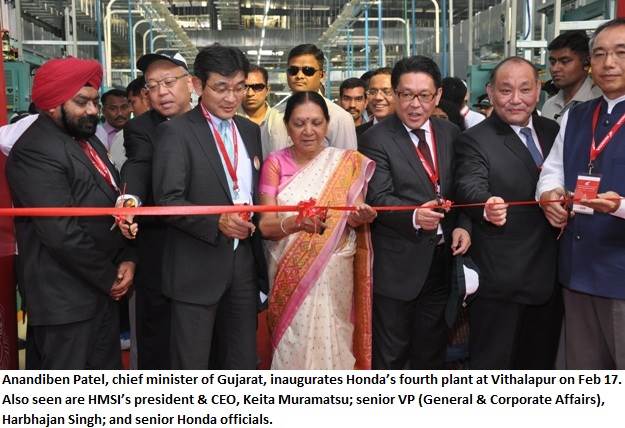 With increasing scooterisation driven by demand from working women, HMSI leads the segment with an India market share of 56 percent and 62 percent share in scooters in Gujarat. “Boosted by the growth-centric outlook of the government, there is an increased focus on investing in roads and infrastructure. These factors imply that the best days for the scooter market in India are yet to come,” predicts Shinji Aoyama Operating officer and director, COO, motorcycle operations, Honda Motor Company. 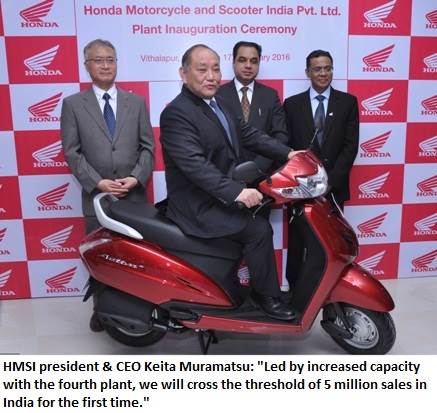 The Gujarat plant will help bridge the gap between demand and supply for Honda’s scooters existing for the last 15 years. At last count, HMSI had a backlog of 32,000 scooters as on January 31. The new facility is also an attempt by Honda to push the Make in India philosophy forward. The plant also boasts of being a green factory and has been set up in a record 13 months. Spread across 250 acres, operations will be stepped up in two phases.

At present, Asia Oceania including India contributes 56 percent to Honda’s global sales of two-wheelers, automotive and power products with India leading the growth momentum. “In case of two-wheelers, ASEAN countries contribute 13.8 million sales which is 80 percent of Honda’s global sales with production facilities in nine countries. India is the fastest growing economy in the world and is one of the most important and fast-growing markets for Honda. We have achieved a new milestone for our business in India,” said Noriaki Abe, Operating Officer, Chief Operating Officer-Asia Oceania Regional Operations, Honda Motor Company at the inauguration of the plant. “This will make India attain the number 1 position in all ASEAN countries. We would expect this growth momentum to continue for the Indian market as well as expect Indian operations to be an export hub for the ASEAN countries.”

In 2015, Honda’s global sales of all products comprised 28 million units with global two-wheeler sales accounting for 17 million units. Today, 25 percent of the total Honda two-wheelers sold worldwide come from India. The company plans to continue investing in technology for the Indian market and is pitching for making India its technology hub through training and cross-market collaborations.

Last year Honda had begun selling its CBR650F sportsbike with plans to localise it in a phased manner. However, Muramatsu says that due to the bike’s high speed and high quality, there is a need for further testing of components that can go into this product. Since its launch last August, the CBR650F will have sold 200 units in India by March-end. At present, of the sportsbikes in its stable, Livo sales are averaging 20,000 a month and have crossed over 100,000 units while the Hornet 160R is touching 31,000 since its launch last December. 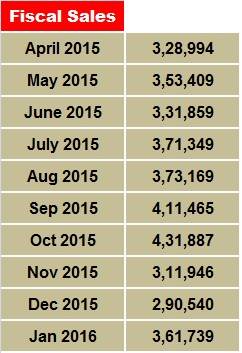 HMSI’s current priorities are to ready its models and their variants – around 48-50 in all – to meet BS-IV and subsequently BS-VI emission norms in collaboration with its R&D team. Except for the Hornet160R and CBR650F, all other models will require an upgrade to BS-IV and subsequently Euro V and VI. In Japan, Honda models currently meet Euro 5 emission norms; India will be the first market to comply with Euro 6 norms, which itself will prove to be a challenge.