What really made GM leave India

This move also came at a time when the race for autonomous cars, electrification and disruptive mobility solutions is intensifying. 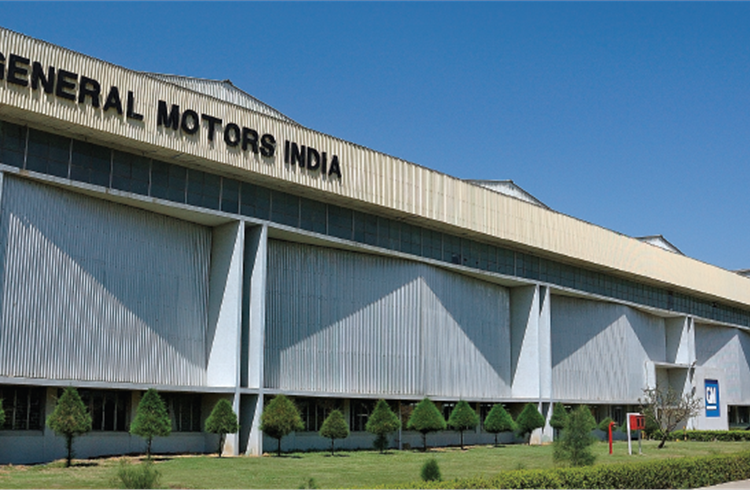 In July 2015, General Motors’ CEO Mary Barra, in a much-publicised visit to India, grandly announced a US$1 billion investment in India. In an exclusive interview with Autocar India, she said, “In 2017- 20 you will see products rolling out and you will see the commitment we are making, so we are definitely serious.”

India was to be a part of a larger US$ 5 billion investment, which included an all-new Global Emerging Market (GEM) platform, multiple body styles and a new engine family. India was to get a 4.35m mid-size sedan and a small SUV to rival the Creta. India was also slated to become the global production base for the new generation of GM diesel engines.

Now, almost two years later, Barra and GM did a complete volte-face and pulled out of the Indian market, leaving the industry shell-shocked. So, why the sudden change of heart?

A lack of proper leadership, poor strategy, the wrong product portfolio and accumulated losses have been cited by numerous industry experts and pundits as the reasons why GM quit the Indian market. But these very reasons were also valid in 2015 when Barra made these grandiose commitments. The truth is that it wasn’t two decades of failure that drove GM out but the uncertainty of its future in the country, despite the promise of India becoming the third-largest automotive market in the world. 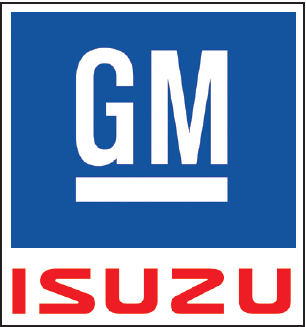 This move also came at a time when the race for autonomous cars, electrification and disruptive mobility solutions is intensifying. The American automaker wants to deploy resources in these areas, which will eventually be the future of the industry. Size and geography are no longer important; instead, GM now plans to concentrate on increasing profitability and deploying capital for the best returns and ensuring a secure future.

India isn’t the only market GM has retreated from. It stopped making cars in Australia and Russia a while ago, hived off its South Africa business to Isuzu and sold Opel to the PSA Group. But at the same time, GM is investing hugely in China, a market that continues to attract more and more investment. And that rankles.

While we can pin the blame for GM’s exit on all its misdemeanours, the fact is that it doesn’t speak well of our market either when one of the world’s largest automakers ups sticks and says: “We explored many options but determined the increased investment originally planned for India would not deliver the returns of other significant global opportunities. This is the right outcome to support our global strategy and deliver appropriate returns for our shareholders,” according to the official statement. It only confirms what many automakers have been thinking all along – that apart from well-entrenched players, the Indian market is not conducive to making profits and is a big drain on resources. But none of them took the bold step of pulling out – until now.

GM’s exit also means hundreds of workers found themselves without jobs, dealerships were shuttered and suppliers lost big contracts. So, what went so drastically wrong that made GM take a sudden U-turn? Here are some of the key reasons:

Soon after Mary Barra’s visit to India in July 2015, Delhi was hit with the Supreme Court’s diesel ban in December 2015. While this only impacted the Trailblazer SUV from GM’s stable, the illogicality of the highest court’s decision, like the rest of the auto industry, left the auto giant baffled. Then came the directive to jump from BS-IV to BS-VI which put into question the US$ 300 million GM had earmarked for a brand-new engine plant, especially  since there was no clarity on the level of BS-VI that would be implemented. Would it be just BS-VI A? Or, would it be the most stringent BS-VI D, which would have a huge impact on the cost making the whole engine plant unviable? Further complicating matters was the lack of clarity on tax  benefits for micro-hybrids; a loophole Maruti and Mahindra exploited (beltedalternator- starter systems are not really hybrids).

Would these be removed or would they stay? In which case, there was an additional cost to  engineer a system. As it so happened, the recent implementation of the GST structure removed all benefits to any kind of hybrid. “These ad hoc and unreasonable decisions, especially the diesel ban, really spooked out the management that needed to have a clear road map to plan their investments,” said a former GM India employee. Plus the growing anti-diesel sentiments put at risk GM’s ambitious plan to manufacture a stateof- the-art 1.5-litre, threecylinder diesel engine (the global launch is in 2018),along with a 1.2-litre, threecylinder turbo-petrol and a 1.5-litre, four-cylinder naturally aspirated unit. 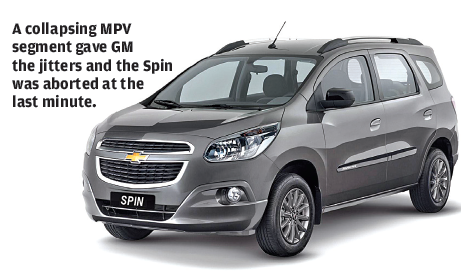 The GEM cars along  with the new petrol and diesel engines weren’t due for launch before 2019, and until then, GM had a ‘bridge strategy’ for a small but steady pipeline of products, in addition to the existing line-up. This included new cars we knew like the Trailblazer, Essentia and Spin MPV and some we didn’t, like a big MPV – jointly developed by  GM and Isuzu – to take on the Innova. So, what went wrong? The MPV segment went into a tailspin and  the collapse of the Mobilio volumes prompted the carmaker to abort the launch of the Spin, even after the entire tooling was shipped from Indonesia to India (and customs paid)!

Things with Isuzu weren’t going well either because the Japanese carmaker was banking on upgrading an old diesel engine to BS-IV spec for its Innova-rivalling MPV, but the sudden announcement of the jump to BS-VI had them axe that plan. Isuzu also explored using a contemporary 1.9- litre diesel that could meet BS-VI but it was proving to be just too expensive to meet the price target. So, with no suitable engine available, the big MPV was shelved. 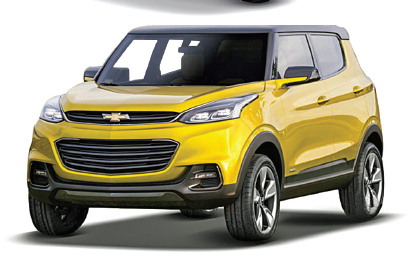 NO SIGHT OF PROFITABILITY

When the original business case for the GEM cars was being developed, GM was confident that the economies of scale from over a 150,000 cars (including exports) would make it quite costcompetitive. However, what it hadn’t bargained for  was the additional costs for future-proofing the GEM cars for all eventualities, like stringent BS-VI regulations and microhybrid capability, which simply blew profitability out of the window. Also, GM underestimated the incredibly low-cost base of Maruti and Hyundai and their ability to aggressively undercut the rivals on pricing. Finally, the numbers just  didn’t add up for GM and there was no point investing millions of dollars on a project that would be loss-making from the start. With no sight of profitability for a company that is now only focusing on profits, the GEM programme was  torpedoed.

The leadership of GM India could not convince the global team of the India story to push investments through. They failed to explain the nuances of the  market and instead rang alarm bells with the diesel ban, insisted on microhybrid options and pushed for an Ertiga-rivalling MPV. So, when the Mobilio failed and the Spin too was axed, GM’s  eadquarters lost faith in the India team’s ability to read the market. In fact, GM pulled out of the GEM programme as early as May 2016, which effectively sealed its fate.

GM’s aggressive new strategy, which puts profits and margins before market share and overall volumes, is possibly the main reason for the exit. The automaker no longer had the patience to play a waiting game, in the hope that one day this market will live up to its promise and become a cash cow like China. GM, however, will continue to build cars in India for exports and it’s business as usual for the tech centre in Bangalore. The big question is how long will it continue manufacturing cars in India, as the export volume of around 90,000 cars per  year is not sufficient to keep the Talegaon plant running efficiently. Some  GM insiders believe that the decision to leave India was too rushed and not  properly thought through, and it’s likely they could  repent this later. The Talegaon plant does give  GM a small window to make a comeback in a couple of years in case the Indian market explodes. It’s unlikely, but not impossible.

(This article was first published in the August 15, 2017 print edition of Autocar Professional)